No Justice for a Palestinian American Who Died in IDF Custody

The soldiers responsible for Omar Assad’s death at 78 have faced no meaningful consequences. 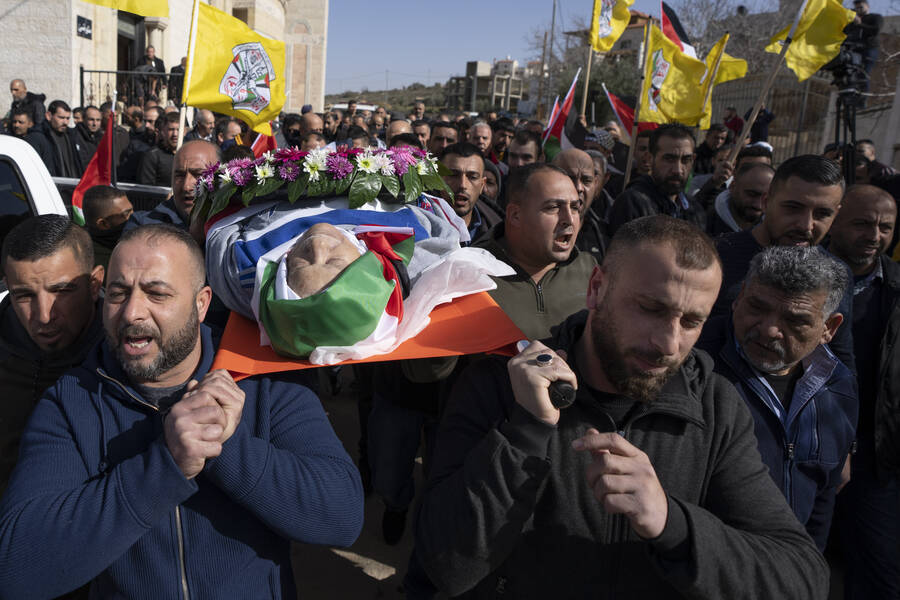 Mourners carry the body of Omar Assad, 78, during his funeral in the West Bank village of Jiljiliya, January 13th, 2022.

IN 1969, Omar Assad and his wife, Nazmieh, left Jiljilya, a West Bank village north of Ramallah, for the United States, where they started a family, launched businesses in the Midwest, and became American citizens. As a result of their move abroad, the Israeli military stripped away their Palestinian residency rights—which, by its own estimate, it also did to140,000 Palestinians between 1967 and 1994.

In 2010, after retiring, the Assads moved back to Jiljilya. They entered, overstayed their three-month visas—thus becoming illegal in their own homeland—and re-applied for their Palestinian identity cards.

Then, they waited. For a decade, they lived in Jiljilya happily, but without legal status, and without traveling back to the US for fear of not being able to return to the West Bank. Finally, late last year, Assad got a phone call from Israeli authorities informing him that he would soon get his ID card. On January 24th, his name indeed appeared on a list announcing new recipients of Palestinian ID cards.

But by then, Omar Assad was dead at 78—killed while in Israeli custody during an IDF raid on his village about two weeks before he would have received his ID card. His family still living in the US would never get the chance to see him again in Wisconsin, where he had raised them.

“Every day, he was like, ‘we’re going to be there,’” said Noha Saleh, a daughter of Assad. “That’s basically what both of them were looking forward to. They took that away from us. It’s beyond words. It’s heartbreaking.”

Assad’s death has attracted more attention than many other deaths of Palestinians at the hands of Israelis, in large part because he was a US citizen. “If he would have been Palestinian without American citizenship, the world would not have heard about it,” said Saleh. Instead, he’s been the subject of numerous reports in The Washington Post and The New York Times, while Israeli outlets have also focused attention on his killing to an unusual degree.

But regardless of his citizenship, Assad’s killing has become emblematic of the disposability of all Palestinian life under Israeli apartheid, and the impunity from the US that Israel continues to enjoy despite its human rights abuses.

According to a detailed timeline of the circumstances around his death published by Haaretz, Assad’s grisly ordeal began on January 12th at around 3 am, when he was trying to get home after gathering with friends. At a surprise Israeli army checkpoint, soldiers asked him to get out of his car; after he refused, an argument broke out. Fifteen minutes later, the soldiers took Assad out of his car and dragged him to an abandoned yard, where they gagged and blindfolded him. At around 4 am, the soldiers left the yard. Another Palestinian man who was detained at the same site called a doctor after noticing that Assad looked blue and unresponsive. At 4:40 am, he was pronounced dead. According to leaked details from an internal Israeli probe, soldiers never sought medical help for Assad, thinking he was merely asleep. But Palestinian witnesses told The Washington Post that “Assad was unconscious and not breathing when the soldiers left them in the courtyard of an under-construction house.”

A Palestinian official’s autopsy attributed Assad’s death to a heart attack brought on by the Israeli soldiers’ actions. The autopsy indicated that Assad had bruises on his head, internal bleeding in his eyelids from being blindfolded, and bruises and welts on his arms and wrists from the zip ties the soldiers had used on him.

The US State Department has asked Israel for more details on the death; according to a Times of Israel report, the State Department privately sent a letter to the IDF last week demanding to know why the army’s probe has taken so long. On Monday, the Israeli army released the results of its probe, finding that there was a “moral failure” committed by soldiers because they left the scene without checking on Assad’s health condition. But no criminal charges have been announced; the only consequences anyone has faced so far are that the commander overseeing the battalion responsible for the arrest was reprimanded, while the platoon and company commanders have been removed from their posts and barred from attaining command positions for two years. In response to the Israeli army’s investigation, Ned Price, the spokesperson for the State Department, said today that the US continues to be “deeply concerned” about the circumstances surrounding the death, and that “the United States expects a thorough criminal investigation and full accountability in this case, and we welcome receiving additional information on these efforts as soon as possible. We continue to discuss this troubling incident with the Israeli government.”

Assad’s family, Palestinian rights advocates, and some US lawmakers are asking the State Department to conduct its own investigation. “We are not satisfied with the US pushing Israel to open an investigation. We think it’s inappropriate for the same entity that committed this crime to be the one investigating. We know it’s going to be an incomplete and dishonest investigation,” said Ayah Ziyadeh, the advocacy director for American Muslims for Palestine. Ziyadeh told Jewish Currents she also wants the State Department to find out whether US military aid and US weapons were used by the military unit that conducted the arrest of Assad.

But similar calls in the past for independent US investigations into how American citizens have been killed by Israeli soldiers have not met success, such as in the cases of Rachel Corrie and Mahmoud Shaalan. As the Biden administration attempts to navigate high-level disputes with Israel over the Iran nuclear deal and other regional issues, it’s unlikely an independent US probe that could lead to a diplomatic conflict will be on the table.

“Omar wasn’t the first [American killed by Israel],” said Ziyadeh, “and he’s not going to be the last until Israel is held accountable.”

Report
Progressives Introduce Legislation to Force US Investigation into Israel’s Killing of Shireen Abu Akleh
The amendment comes after the State Department released a waffling statement on the death of the Palestinian American journalist.
Alex Kane
Newsletter
Ben & Jerry’s Clashes With Unilever Over BDS
The ice cream maker is suing its parent company for selling off its business interests in Israel to a local company that plans to sell in West Bank settlements.
Alex Kane
Sign up for our email newsletter, featuring exclusive original content