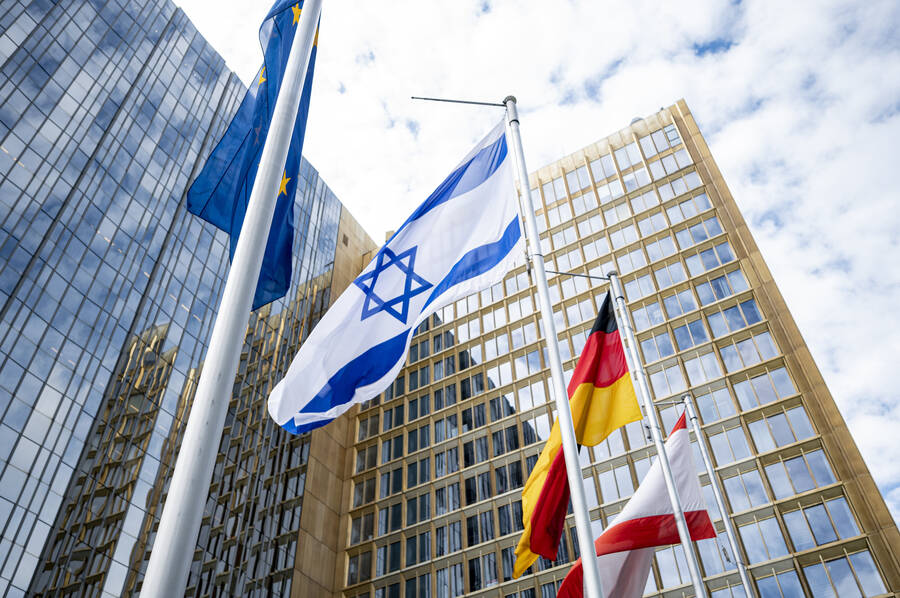 The Israeli flag flies in front of Axel Springer headquarters during an intensification of violence in Gaza, alongside the flags of the European Union, Germany, and Berlin, May 16th, 2021
Fabian Sommer/picture-alliance/dpa/AP Images
Tweet Copy Link Email Print

WHEN THE GERMAN MEDIA CONGLOMERATE Axel Springer announced in August that it would be spending more than $1 billion to acquire Politico, one of the most influential news organizations covering national politics in the United States, it raised eyebrows across the industry. The sale, which was completed late last month and which will be accompanied by a staff expansion of more than 10%, immediately makes Springer a major player in US media, one whose policies could have ripple effects in other news organizations; as such, the company is already drawing much closer attention on this side of the Atlantic. Last month, New York Times media columnist Ben Smith reported on a sex scandal at the Springer-owned tabloid Bild, forcing the resignation of its top editor.

One detail of Springer’s corporate culture that deserves increased scrutiny is the list of “Essentials” that its late, eponymous founder established in 1967, and which, since March 2016, “unites all employees in all the companies belonging to Axel Springer in standing up for freedom,” according to the company’s website. The five basic principles Axel Springer considers binding on all of its employees, and which it will expect Politico journalists to observe, are as follows:

“These values are like a constitution, they apply to every employee of our company,” Springer CEO Mathias Döpfner told The Wall Street Journal last month, adding that people who have a fundamental problem with any of these principles “should not work for Axel Springer, very clearly.” The Essentials reflect a German culture surrounding freedom of speech that is less absolutist than that of the US: Since the 1950s, Germany has enforced tough hate-speech laws designed to prevent a resurgence of Nazism, making the existence of such a list of dictates less jarring in a German context. Döpfner also told the Journal that Springer is “step by step developing the US into our most important market and engine of growth for digital publishing,” and there’s every reason to think that the company’s American footprint is going to grow considerably in the next few years. Given the consistently dire state of the US media industry, Springer’s expansion will affect career opportunities for all American journalists—and its policies will establish precedents that could be copied or adapted by other employers.

As absurd as the Essentials may seem, Axel Springer is only making explicit what mainstream media organizations in the US very often treat as their implicit ideology. If you’ve ever watched CNN or read The Washington Post, to name two examples among many, you’ve no doubt encountered robust statements supportive of Israel, NATO, or capitalism from journalists who insist that they are studiously neutral, non-partisan, and non-ideological—because those are all widely regarded within the industry as common sense, rather than as contestable positions.

But that doesn’t mean the imposition of the Essentials is insignificant. Although they are especially concerning for left-leaning writers and editors, even journalists who might personally agree with all the listed principles should see the company’s insistence on them as contrary to the spirit of journalistic inquiry. While Döpfner has said that Politico employees, unlike their counterparts in Germany, will not be required to sign a written commitment to the contents of the list, his comments on the matter still send a clear message to any journalist who has publicly criticized Israel—not to mention free market capitalism, NATO, or the European Union—that they are not welcome at one of the fastest-growing media employers. It’s not much of a stretch to think this could have a chilling effect on Palestinian journalists in particular, since they are especially likely to have questioned the State of Israel’s right to exist, or to have employed phrases or participated in actions that could be interpreted as questioning that supposed right.

In preparing to write this week’s newsletter, I spoke on background with several journalists currently employed at Politico or at Insider, the New York-based news site (formerly known as Business Insider) that Springer bought for $442 million in 2015 as part of its US expansion. (Insider told me in a statement that its employees do not sign a pledge to uphold Springer’s principles, and that “while part of the Axel Springer corporate family, Insider acts as an independent news organization.”) All of my sources told me broadly the same things: that the Essentials are onerous and inconsistent with how American journalists typically operate; that none of them has ever been asked to sign anything committing them to the Essentials, or would ever agree to do so; and that if the Essentials were to be cited in order to censor a particular article, it would likely prompt a newsroom revolt. None of them believed that their newsrooms would change anything about their coverage in response to the Essentials.

While neither Politico nor Insider can be characterized as left-wing publications—to put it mildly—their coverage of Israel/Palestine has at times deviated from the uncritical support implied by the second item of the Essentials. During May’s escalation of violence in Gaza, Politico mostly republished articles from The Associated Press, with headlines that didn’t obfuscate the nature of Israeli policies, like “Israel destroys Gaza tunnels as Palestinian death toll eclipses 200.” Insider, which was already managed by Springer at the time, reported on May 21st on Israel’s attacks on a building that housed the AP’s offices in Gaza in a way that questioned the Israeli government’s claims that Hamas operated in the building; and on May 28th, Insider republished commentary from World Politics Review questioning Israel’s contention that its attacks on Gaza could ever be “precision strikes” intended to avoid civilian casualties. Though neither publication focuses on Israel, or on international affairs in general, both have demonstrated a willingness to cover Israeli policies critically in the past year.

As Springer expands its US presence, staffers at its publications are being proactive in asserting control over their workplaces—control that may prove critical to contesting any attempt to enforce the Essentials. Insider employees announced their intention to unionize in April, and Politico followed suit in late October, after the sale to Springer was finalized; both publications’ staffs are joining a trend toward digital media unionization that has swept the industry (including Jewish Currents) over the past several years. Earlier this week, confronted with overwhelming support, Politico agreed to voluntarily recognize the union, even though Politico founder Robert Allbritton, who is remaining on as publisher, criticized media unionization in an interview with The New York Times in August. “If you’re working in a warehouse, it makes sense,” Allbritton told the Times. “But when you’re talking about smart folks who are using their minds for a very creative project, I don’t get it.” Given the ambiguity surrounding the Essentials, the weight they will carry in practice at both publications may end up depending on the unions’ success in standing up for their members.

For some in media, Springer’s list of principles is encouraging. Upon hearing of the Politico sale in August, James Kirchick wrote for the right-leaning Jewish publication Tablet that the Essentials represent “moral clarity,” and praised Döpfner for flying the Israeli flag outside the company headquarters in Berlin in response to May’s surge of violence in Gaza and subsequent antisemitic attacks in Germany. “[T]he company rightly believes that a job at Axel Springer is a privilege, not a right, and that if employees are bothered by the Essentials, they are perfectly entitled to find work elsewhere,” wrote Kirchick, who concluded his piece with the kiss-off, “best of luck to the employees of Politico.” In a tweet promoting Kirchick’s article, self-styled free speech champion Bari Weiss concurred: “All it takes to stop the madness is an adult willing to say: no. Astonishing how rare those are these days. The CEO of Axel Springer is one of the few.”

To Kirchick and Weiss, Springer’s insistence on the Essentials represents a challenge to what they perceive as a radical expansion of “wokeness” at mainstream US publications like The New York Times, where a younger generation of journalists has forced industry-wide reckonings on issues like race and gender—and, in some limited cases, Israel/Palestine. While they greatly overstate the extent to which these reckonings are complete, and ignore how much establishment media is dominated by the same personalities and interests it has been for decades, they’re not entirely wrong to understand Döpfner as reacting to a progressive left whose influence is advancing. That Axel Springer feels the need to assert the Essentials in the context of its US expansion suggests, at the very least, that it misunderstands the culture of American newsrooms. But it might also suggest that its management knows it can no longer take for granted that every journalist it hires holds these positions.