What Does “From the River to the Sea” Really Mean?

The much-maligned slogan resists the fragmentation of Palestinian land and people by Israeli occupation and discrimination. 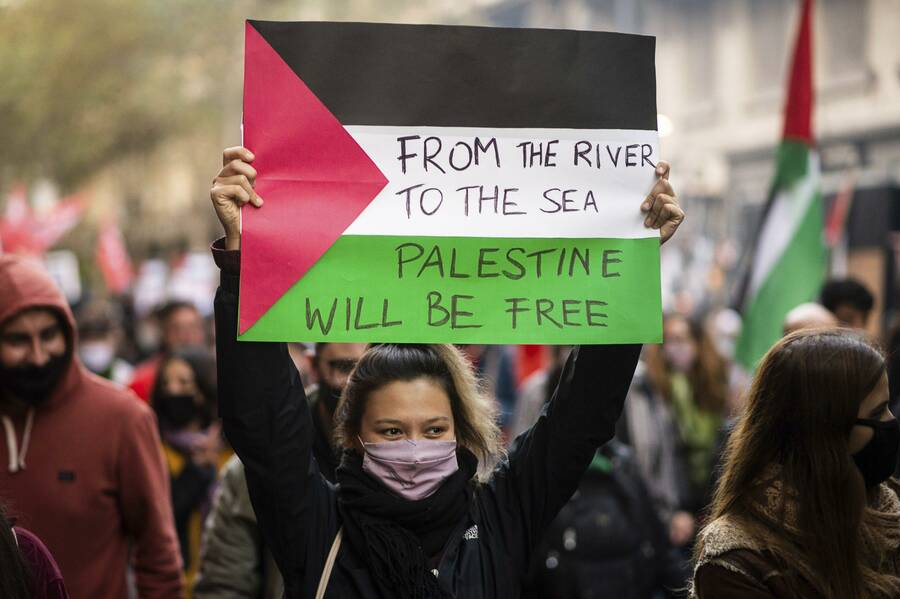 A woman holds a banner reading, "From the River to the sea, Palestine will be Free" during a pro-Palestine protest in Buenos Arires, May 17th, 2021. Photo: Manuel Cortina/NurPhoto via AP
Tweet Copy Link Email Print

This piece originally appeared in yesterday’s email newsletter, to which you can subscribe here.

IN RECENT WEEKS, as Palestinians rose up in their homeland, in the wider Middle East, and around the world, you probably heard the slogan “from the river to the sea, Palestine will be free.” In cities across the globe, protesters responded to the pending expulsions of Palestinian residents from their homes in Jerusalem, Israeli attacks on holy sites, and the bombardment of Gaza. If you watched or attended any of these protests, you likely saw the slogan printed on a sign, or heard it drifting over the crowd.

You may also have heard claims that this slogan is antisemitic or even genocidal. On May 19th, for example, the New Yorker Union was widely attacked for tweeting, “Solidarity with Palestinians from the river to the sea who went on a 24-hour strike yesterday for dignity and liberation.” Whether in earnest ignorance or in bad faith, critics of the river-to-the-sea formulation argued that the union, and others who used the slogan last month, were implicitly calling for not only dismantling the State of Israel, but cleansing the entire region—from the Jordan River to the Mediterranean Sea, an area encompassing the West Bank, Gaza, and all of Israel within its internationally recognized pre-1967 borders—of its Jewish population. (Unfortunately, the union backed down in the face of these smears.)

Like many Palestinians, I’ve long used this phrase. About a decade ago, Peter Beinart started a blog at The Daily Beast called “Open Zion” aimed at bringing together a range of perspectives on Israel/Palestine. He invited me to participate regularly, and at first I was hesitant, given the name. Would a project called “Open Zion” really be open to arguments that challenged the tenets of Zionism? I agreed to participate on the condition that I could write what I wanted and that my column could be called “From the River to the Sea.” As I explained to Peter, I wasn’t concerned with Israel’s identity crisis over whether it could be both Jewish and democratic; I was concerned that Palestinians were being denied basic rights throughout their homeland. My column, “From the River to the Sea,” would be focused on the unity of the Palestinian experience and how all Palestinians faced a shared struggle with Zionism regardless of where they lived.

Today, I believe the conversation has increasingly shifted in this direction. This is due in part to a general intellectual and moral awakening—in media, in academia, in activist spaces, and even among certain elected officials—on the subject of Israel/Palestine, but also because of the increasingly horrific realities on the ground. More than ever before, people around the world are accepting that the problem goes well beyond the occupation of the West Bank, and that discrimination against Palestinians occurs on both sides of the Green Line.

But it is precisely because Zionist settler colonialism has benefitted from and pursued Palestinian fragmentation that it seeks to mischaracterize and destroy inclusive and unifying rhetorical frameworks. For example, journalist Marc Lamont Hill was attacked and ultimately removed from his position at CNN for calling for Palestinian freedom “from the river to the sea.” After all, it is far easier to dominate a divided people fighting different battles on different fronts than it is to dominate one people united in a single battle for the same universal rights.

Since Zionists struggle to make a persuasive argument against freedom, justice, and equality for all people throughout the land, they seek instead to attack the message and messenger. When Palestinians proclaim “from the river to the sea, Palestine will be free,” many Zionists argue that this is a Palestinian call for genocide. But as historian Maha Nassar has noted, there has never been an “official Palestinian position calling for the forced removal of Jews from Palestine.” The links between this phrase and eliminationism might be the product of “an Israeli media campaign following the 1967 war that claimed Palestinians wished to ‘throw Jews into the sea.’ ” Jewish groups such as the American Jewish Committee also claim that the slogan is antisemitic because it has been taken up by militant groups such as the Palestine Liberation Organization, the Popular Front for the Liberation of Palestine, and Hamas. But as Nassar writes, the phrase predates these uses, and has its origins as “part of a larger call to see a secular democratic state established in all of historic Palestine.”

The claim that the phrase “from the river to the sea” carries a genocidal intent relies not on the historical record, but rather on racism and Islamophobia. These Palestinians, the logic goes, cannot be trusted—even if they are calling for equality, their real intention is extermination. In order to justify unending violence against Palestinians, this logic seeks to caricature us as irrational savages hell-bent on killing Jews. Nor does the attempt to link Palestinians to eliminationism stop at the deliberate mischaracterization of this slogan; rather, it is deployed in many other contexts. In 2015, for instance, Israeli Prime Minister Benjamin Netanyahu engaged in Holocaust revisionism by stating that it was really a Palestinian, not Hitler, who inspired the final solution. Angela Merkel, the German Chancellor, actually had to remind the Israeli Prime Minister that it was the Germans who were responsible for the Holocaust. Raising the constant specter of eliminationism has political utility for Zionists; in such a threatening environment, perpetual abuses of Palestinians can be rationalized.

This twisted logic is not only reserved for Palestinians. Marginalized groups are often accused of not being trustworthy and of having deep-seated ulterior motives aimed at destroying society. Jews should know this trope well, as it has long been a central feature of antisemitism. In fact, the worst antisemitic attack in American history was carried out in recent years by a murderer who attacked a synagogue because he thought Jews were destroying white Christian-dominated society by bringing in brown immigrants under the guise of humanitarianism.

Fundamentally, such arguments disregard what Palestinians are calling for when they use the phrase in question: a state in which Palestinians can live in their homeland as free and equal citizens, neither dominated by others nor dominating them. When we call for a free Palestine from the river to the sea, it is precisely the existing system of domination that we seek to end.

Analysis
The Wrong Way to Boycott
In contrast to ineffective—or even unethical—actions targeting Russian culture and individuals, the Palestinian BDS campaign is a model of how to use boycott and divestment efforts strategically.
Yousef Munayyer
Analysis
Exporting the Tools of Apartheid
NSO Group, the Israeli firm that sells its spyware to authoritarian regimes around the world, emerged from a military unit that perfected its surveillance techniques on Palestinians.
Yousef Munayyer
Sign up for our email newsletter, featuring exclusive original content
Want original reporting and analysis on Israel/Palestine?
Sign up for the Tuesday News Bulletin.