The Real War on Free Speech

Some of the Harper’s letter signatories use their defense of “free speech” to silence support for Palestinian rights. 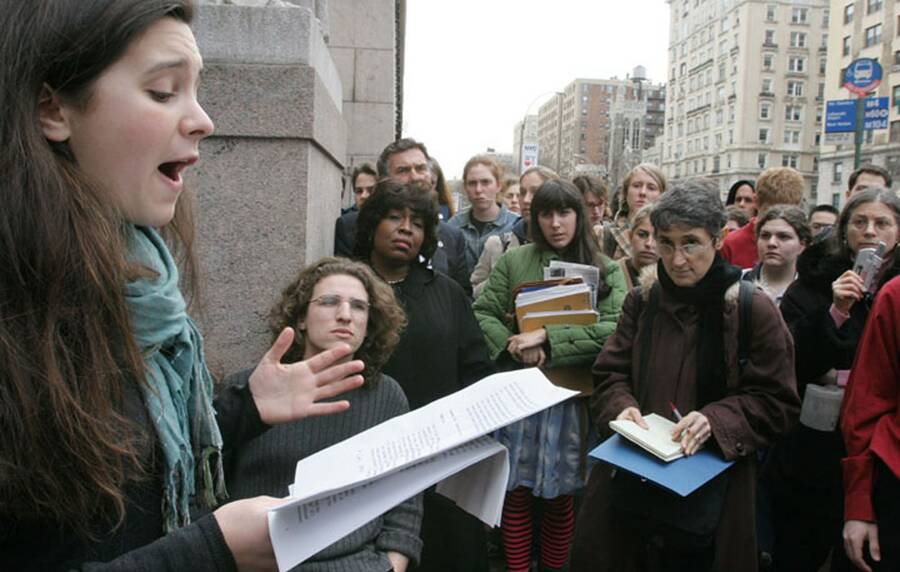 TWO WEEKS AGO, an open letter published in Harper’s Magazine and signed by more than 150 public figures, most of them writers or academics, ignited a new round of debate over “cancel culture” and its discontents. The letter portrayed freedom of expression in the United States as dangerously imperiled: “We uphold the value of robust and even caustic counter-speech from all quarters. But it is now all too common to hear calls for swift and severe retribution in response to perceived transgressions of speech and thought.” A week later, Bari Weiss, one of the letter’s high-profile signatories, resigned her position at the New York Times op-ed desk and self-published her resignation letter. Echoing the Harper’s letter, Weiss’s statement decried an increasingly “illiberal environment” in public discourse writ large and at the Times in particular. She wrote that her colleagues—and the public—have become unwilling to accommodate views that don’t adhere to “the new orthodoxy.”

Yet, as some critics have noted, Weiss has a long history of claiming to support free speech while trying to curtail the speech of Palestinian rights advocates, from her college days through her years at the Times. And she is not the only signatory of the Harper’s letter who has sought to silence those with whom she disagrees. Cary Nelson, professor emeritus at the University of Illinois, is a prominent opponent of the Boycott, Divestment, and Sanctions (BDS) movement and has written extensively about the need to combat anti-Zionist scholarship in the name of academic freedom.

These figures’ attempts to shut down speech while advocating for “free speech” are certainly hypocritical. But more importantly, their failure to recognize the tension between their free speech advocacy on the one hand, and their pro-Israel advocacy on the other, reveals an unwillingness to reckon with the relationship between speech and power. “What [the Harper’s] letter is missing is the power dynamics,” said Radhika Sainath, a senior staff attorney at Palestine Legal, where she oversees the nonprofit organization’s casework on free speech, academic freedom, and censorship. “The real problem is the problem of the state coming down on people who are speaking out” on Israel/Palestine.

Weiss and Nelson not only rigorously police the boundaries of acceptable discourse while simultaneously lamenting that the boundaries have become too narrow; they do so with far more cultural, financial, and even governmental support than the Palestinian rights advocates they seek to silence or the Black Lives Matter activists whose perceived excesses they lament. What their exclusive focus on the boundaries of acceptable debate obscures is the very real threats to political speech in the US—especially speech in support of Palestinian rights—and how their own efforts give rhetorical cover to those threats.

For more than a decade, Israel-advocacy organizations have employed the rhetoric of “free speech” and “academic freedom” to shut down criticism of Israeli government policies in the public sphere, and especially on university campuses. Through accusations of incivility or insufficient objectivity, these organizations and those who work with them have attempted to and at times succeeded in blocking hires, denying tenure, and even getting people fired. Now, with backing from the Trump administration, this crusade against support for Palestinian rights has morphed from an effective public relations strategy, which relied on public pressure for results, into a concrete framework for government assaults on free speech—from the anti-BDS laws sweeping state legislatures to the executive order designating criticisms of Israeli government policy as forms of anti-Jewish discrimination.

Using a tactic perfected by Israel-advocacy groups like the Lawfare Project, which have been spearheading this legal campaign, both Weiss and Nelson have long framed their own Israel-advocacy efforts as attempts to protect free speech, rather than to limit it. As an undergraduate at Columbia University in the mid-aughts, Weiss co-founded a group named Columbians for Academic Freedom; supported by outside Israel-advocacy organizations like the David Project and Campus Watch, it claimed that combatting a supposed anti-Israel bias in the Middle East and Asian Languages and Cultures (MEALAC) department would lead to a freer academic climate. In a 2018 Twitter thread, Weiss said that she never advocated for any professors to be fired while in college and that she had simply exercised her own right to free speech. However, Columbians for Academic Freedom did demand that the administration change the department’s curriculum and make it easier to file complaints against professors, measures that would have affected certain scholars’ responsibilities and duties, as well as their future job prospects. The New York Civil Liberties Union said that the students’ crusade jeopardized academic freedom.

As an undergraduate, Weiss also asked for invitations to controversial speakers to be rescinded. In one case, she wrote an op-ed for The Columbia Spectator about a proposed event featuring then-President of Iran Mahmoud Ahmedinijad, arguing that “condoning hate is not an academic exercise”—the same argument that campus activists often make today when advocating against invitations to controversial speakers, and which Weiss often criticizes. (Weiss did not respond to requests for comment for this article.)

Cary Nelson, an outspoken opponent of the BDS movement in academia, has also justified his activism on the grounds that it bolsters academic freedom. Nelson defended the University of Illinois trustees’ 2014 decision to deny tenure to Palestinian-American scholar Steven Salaita, and he has written extensively about what he sees as the pernicious effects of anti-Zionist scholars on the academic climate. In his articles and books—most recently Israel Denial: Anti-Zionism, Anti-Semitism & the Faculty Campaign Against the Jewish State (2019)—Nelson charges that prominent anti-Zionist academics, such as Jasbir Puar, Saree Makdisi, and Judith Butler, have engaged in “pseudo-scholarship,” and that “the ferocity of anti-Zionist convinction in their books and essays unfortunately means that they often cross the line to anti-Semitism.” In a related essay titled “The Devil’s Intersectionality: Contemporary Cloaked Antisemitism,” Nelson argues that these anti-Zionist scholars, alongside the BDS movement, are “making rational dialogue impossible.” For Nelson, it’s not only these scholars’ alleged antisemitism that threatens academic freedom but their lack of objectivity and “irrationality.” In an interview last week, Nelson said he thinks anti-Zionism is “a political perspective that people have a right to.” But, he added, “I think they can still be judged about whether they are rational, if their politics carries over into their teaching and research.”

This line of argument is a common one. Accusations of insufficient objectivity or rationality are often wielded against Palestinian, Arab, and anti-Zionist scholars, especially those whose work relates to Israel/Palestine, as a way to silence them, framing political grievance as concern for academic standards. In 2007, for instance, Palestinian American anthropologist Nadia Abu el-Haj won a bitter battle for tenure at Barnard College after an intense alumni campaign attempted to discredit her work, including her book Facts on the Ground, which explored how Israel uses archaeology in order to bolster its exclusive claim to territory in Israel/Palestine. Weiss complained about Abu el-Haj’s tenure in an op-ed for Haaretz, framing her concern as an objective evaluation of Abu el-Haj’s scholarship rather than a political disagreement. “This is not just another round between the Zionists and the anti-Zionists,” she wrote. “This is about the nature of truth, and the possibility of, well, facts themselves.”

But who gets to be objective, and who does not, is a function of power; it is, in other words, political. In light of the significant power differentials between Israel-advocacy organizations and grassroots Palestinian rights activists, it’s hardly surprising that strong political commitments are almost never disqualifying for Zionist academics, or that Zionist academics’ ability to be rational is rarely systematically questioned like that of their Palestinian, Arab, and anti-Zionist peers. Nelson himself has clear ideological commitments—the final chapter of Israel Denial is devoted to “A Proposal to Rescue the Two-State Paradigm.” Yet Nelson does not see his own Israel advocacy or his commitment to a two-state solution as a sign that he lacks the necessary distance or objectivity to participate in scholarly debate. Likewise, at Columbia, Weiss argued that professors in the MEALAC department lacked the requisite objectivity to teach and imbued their learning environment with “incivility.” Yet her side had its own ideological agenda and its own disruptive tactics. A Columbia University panel convened to assess the charges levied by Weiss’s group found no evidence that any professors had issued antisemitic statements; it did find, however, that pro-Israel students had heckled professors during classes and lectures on Middle East studies and were partially to blame for a lack of “civility” on campus.

The Harper’s letter signatories are not wrong that there is a war on political speech in the US. But it’s not the one most of them have in mind. It is, instead, the one in which Weiss, Nelson, and other anti-BDS partisans are active participants, fighting on the rhetorical front in tandem with a well-funded, state-aligned apparatus working to make support for BDS and anti-Zionism not only unacceptable but illegal. They have already won significant victories. Across the US, 32 states have enacted legislation banning or restricting boycotts in support of Palestinian rights. In North Carolina, the federal government threatened to defund the joint Duke-UNC Middle East studies consortium after Israel-advocacy groups complained about the speakers at an academic conference on Gaza. The US government’s adoption of the controversial International Holocaust Remembrance Alliance (IHRA) definition of antisemitism—which equates anti-Zionism with antisemitism and designates criticism of Israeli policy as forms of anti-Jewish discrimination under Title VI—has emboldened an entire network of Israel-advocacy groups that file legal complaints against Palestine-related events on campuses, sometimes even before they have happened.

What the “free speech” and “cancel culture” discourse advanced by the Harper’s letter obfuscates, then, is how signatories like Weiss and Nelson use that rhetoric in political struggles with very real, material consequences. Indeed, while the letter’s signatories locate “cancel culture” in the virtual realm of social media, conjuring the image of “the mob,” Israel-advocacy organizations—including those that Weiss and Nelson have worked with—are using terms like “free speech” and “academic freedom” to shut down real-life events on university campuses and to turn the legal apparatus of government against supporters of Palestinian rights.

Newsletter
The Arkansas Anti-Boycott Case, Explained
A ruling by the Eighth Circuit Court of Appeals upholding the state’s anti-BDS law could be heading to the Supreme Court.
Mari Cohen
Newsletter
General Mills Avoids Anti-BDS Backlash for Pulling Out of Settlements
By making no explicit political comment, the company has been spared the penalties Ben & Jerry’s faced.
Mari Cohen
Sign up for our email newsletter, featuring exclusive original content