Palestinian opposition to the PA’s security coordination with Israel has risen to a level of intensity unseen since the Second Intifada. 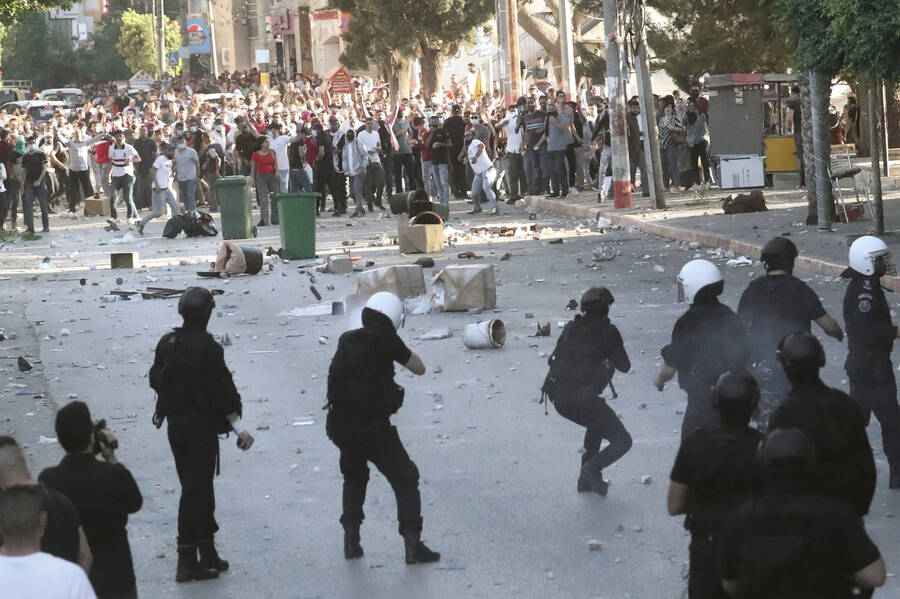 Palestinian Authority security forces fire tear gas at protesters in the West Bank city of Ramallah on June 26th, 2021, during a rally calling for the resignation of President Mahmoud Abbas following the death in PA custody of political activist Nizar Banat.

On September 20th, Palestinian Authority (PA) security forces arrested Musab Shtayyeh and Ameed Tbaileh, who were reportedly members of Hamas. The PA, which governs portions of the otherwise Israeli-controlled West Bank, is dominated by members of the nationalist Palestinian party Fatah, while the Islamist movement Hamas rules Gaza; the two parties have been engaged in a bitter dispute over power and strategy since 2006. In an indication of the PA’s faltering grip on Palestinian cities, the PA’s arrest of Shtayyeh and Tbaileh sparked protests, with Palestinian fighters shooting at PA forces while Palestinian protesters pelted PA cars with stones. A 53-year-old Palestinian man who was present during protests but not a participant was killed; it’s unclear who was responsible for his death.

For many Palestinians, the arrest of Palestinian fighters by PA forces was an example of everything that’s wrong with the PA’s policy of security coordination with Israel. The PA works to arrest fighters said to be behind armed attacks on Israeli soldiers and civilians, which many Palestinians view as legitimate resistance to Israeli occupation and colonization of Palestinian land. As Israel’s military occupation grows more entrenched, the PA continues to try to use international institutions to pressure Israel while avoiding the resistance strategies—be it armed protests or unarmed strikes and boycotts—that most Palestinians support. The recent gun battles and protests were an expression of Palestinians’ growing anger at the PA.

To better understand the dynamics behind Palestinian discontent with the PA, Jewish Currents spoke with Dana El Kurd, an assistant professor of political science at the University of Richmond and author of the book Polarized and Demobilized: Legacies of Authoritarianism in Palestine.

Alex Kane: What is the significance of the protests that have unfolded in Nablus in response to PA security forces’ arrest of Shtayyeh and Tbaileh, who are part of Palestinian armed resistance groups?

Dana El Kurd: The obvious implication is that there’s a boiling point. The PA is facing enormous backlash because of the role it plays in the occupation apparatus, in particular with regards to security coordination and policing Palestinian dissent.

There was a recent interview in +972 Magazine with the governor of Jenin, Akram Rajoub, where he essentially claims that the PA doesn’t have to do something just because the Israelis ask. But people don’t see it that way, people see it as: “You’re coordinating, you’re helping the enemy crack down on any viable dissent.” This time around, there was not only an armed confrontation with the PA, but protests afterwards that led the PA to try to de-escalate with people in that area. There was a hudna, kind of like a ceasefire, where the PA came to an agreement with the Nablus resistance fighters. But overall, people are really reaching a point of no return and the PA is starting to lose control.

AK: Could you explain what you mean by a point of no return?

DEK: There has always been some degree of PA control that’s built on their coercive capacity, but there are also people who are invested in the idea of the PA. And I think we really are reaching a low point regarding that kind of control. People are simply no longer tolerating the PA’s role in all of this. There has been a break between the older generation and the younger generation, specifically. Younger people, who have grown up with no political horizon, are taking up arms much more readily, and are willing to directly confront the PA.

Some of this willingness to violently confront the PA has precedent: It happened before during the Second Intifada, when parts of the PA security apparatus broke off to confront Israeli occupation forces. The biggest development there was the creation of the Al-Aqsa Brigades, the militant arm of Fatah that was supposedly dismantled in 2007 in accordance with negotiations, but which is now seeing a resurgence. We’re again seeing Fatah people not toeing the line; we’re seeing a resurgence of the Al-Aqsa Brigades. The fact that they are regrouping shows that the political arm of Fatah, the political leadership, has completely lost control of a militant organization that is supposedly its affiliate. This kind of factional infighting suggests that the PA doesn’t fully control even all of its own allies.

AK: Are these fractures within the PA connected at all to years of economic deterioration?

DEK: Somewhat, but the bigger issue is that it became really clear that Fatah leadership is not open to any kind of shift in course, or any new blood. In the recently canceled Palestinian elections, for instance, there was a lot of changes to the election rules which some said were measures to block youth participation, such as rules stipulating that parliamentary candidates had to be at least 28 and pay $20,000 to register. Similarly, at Fatah general conferences, [PA president Mahmoud] Abbas marginalized his opponents and the younger generations to consolidate his control—with Israel’s help, I might add, since Israel prevented certain Fatah members not in Abbas’s inner circle from attending the conferences. So it is the deterioration of the political situation, more than the economic one, that is responsible for these fractures.

AK: Is there another formation people are turning to instead of the PA?

DEK: It’s important to note that polling shows that Hamas is not enjoying the same kind of popular legitimacy that they did following the last Gaza war in May 2021. People in the West Bank view Hamas as having not translated their gains after the last war into any kind of change on the ground. So the armed resistance we’re seeing is not a Hamas versus Fatah thing, or a Hamas versus PA thing. I think people are pretty fed up with all parties. So you see people turning instead to militias and armed resistance groups, particularly the Al-Aqsa Brigades and [Palestinian Islamist political faction] Islamic Jihad.

AK: The arrest operation occurred in Nablus. Israel has pressured the PA to take similar actions in Jenin, but the PA hasn’t. Is there some sort of meaningful difference in Jenin’s and Nablus’s relationship to the PA?

DEK: The difference is more about the PA’s lack of ability rather than differences between those two places. Even though the PA is making it seem like it’s their choice not to intervene, they’ve actually lost more control in Jenin. Groups like Islamic Jihad are more popular in Jenin.

AK: How does the decision to cancel Palestinian elections play into the PA’s standing in cities like Nablus?

DEK: Let’s think about the counterfactual: if the elections had gone forward, would the situation be so different from where we are now? I don’t think so. That Palestinians lost the opportunity to vote does of course impact people’s psychological determinations about the political situation. But if you’re thinking about people in Jenin, they’re not concerned about the election. They’re losing somebody every day. There are bigger structural problems here. People are questioning why the PA exists in this form at all.

AK: Israeli officials are constantly saying that the PA needs to do more, the PA needs to take control, the PA is failing and that’s why we have to raid Palestinian cities and camps and clamp down on on terrorism. What is your analysis of these claims?

DEK: For the Israeli government and its affiliate actors, impunity is the name of the game. The reality is that they’re the ones who destroyed any capacity the PA had to begin with. Even Biden administration officials are saying that the ball is “in Israel’s court” when it comes to strengthening and stabilizing the PA. But instead, Israel has determined that incursions into Palestinian cities are more worth it; the damage they can inflict is more valuable than the potential risks to the IDF’s own soldiers. So they want to do it and they’re actively prepared for it, and exhorting the PA to do more is a cover for that.

AK: How would you assess the Biden administration’s policy towards the PA and how it has contributed to the situation?

DEK: The Biden administration has made space for the PA’s deterioration because they’ve allowed Israel to sideline the Palestinians entirely. They’ve thrown their weight behind Israeli normalization with Arab countries, the Negev Summit, and regional cooperation—which excludes Palestinians. They’ll say that these are not substitutes for progress on the peace process, but they won’t do anything to push Israel to actually make that progress. Israel then has no reason to pursue anything with the Palestinians aside from a violent status quo. This further weakens the PA, which is expected to continue playing the role of diffusing Palestinian anger while being actively impeded from doing so. More importantly, Israeli intransigence makes it increasingly clear that the PA and its leadership do not have any leverage vis a vis Israel and can’t really offer Palestinians a political path forward. I think Palestinians can see that the peace process is dead. So now PA forces are facing challengers and a loss of control unseen since the Second Intifada. The PA is holding on but even they know their days are numbered.

AK: Where do you think the situation goes from here?

DEK: The West Bank is very unstable, and it looks like things will only become more unstable, which will lead to lots of people losing their lives.

In an ideal world, there would be a serious effort to rethink the Oslo framework rather than just making fancy gestures at going back to the peace process. The Oslo Accords were predicated on the idea of a two-state solution and a weak Palestinian state without any true sovereignty. This solution is now dead. Also, Israel was able to walk away from the Oslo Accords without any penalty. Rethinking Oslo means moving away from dead-end discussions about the two-state solution; all efforts should first go toward halting Israeli violations such as the continued displacement of Palestinians and Israel’s discriminatory policies, and then beginning discussions about restoring Palestinian sovereignty and resolving the root causes of the conflict. But this is a fantasy. I don’t see Israelis taking that route, and I don’t see the Americans taking that route. We are likely to see the costs on the ground before a change in policy.