Shared Grief Is Not Enough

After the Buffalo massacre, Jewish institutions must confront their own complicity with white supremacy. 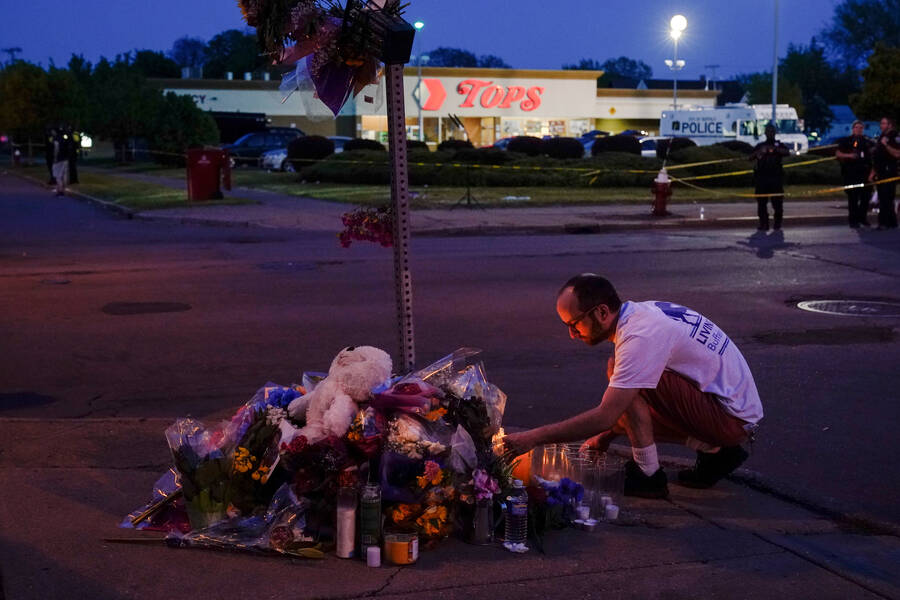 A person pays his respects at a makeshift memorial outside the scene of a shooting at a supermarket in Buffalo, New York, May 15th, 2022.

Over the weekend, a white supremacist murdered ten people in a mass shooting at a grocery store in a predominately Black and low-income neighborhood in Buffalo—a chilling reminder of the constant threat of racial violence that underpins American society. For Black Americans, the killing of Ruth Whitfield, Roberta Drury, Aaron Salter, Heyward Patterson, Pearl Young, Geraldine Talley, Celestine Chaney, Katherine Massey, Margus Morrison, and Andre Mackneil reflects an unspeakable grief that has endured for our entire time on this continent. It is the grief of Tulsa’s Greenwood neighborhood, burned to the ground in 1921; it is the grief of the 2015 Emanuel African Methodist Episcopal Church shooting in Charleston; it is the grief of loved ones stolen by slavery, prisons, gun violence, police brutality, and lynching. It is a grief unique to our experience in this country, and yet simultaneously shared by every other marginalized group that finds itself in the crosshairs of white nationalist violence. For many Jewish Americans, the antisemitism also inherent in these incidents is undeniable. The shooter not only espoused “great replacement theory”—a white nationalist ideology that blames Jews for encouraging nonwhite immigration to subvert the white race—he also scrawled the name of the shooter who massacred 11 Jews at the Tree of Life synagogue in Pittsburgh in 2018 on the barrel of his gun.

The anti-Black massacre comes at a time when the Republican Party, which at this point is all but openly far-right, is turning up the heat on many marginalized communities—banning critical race theory in schools, suppressing Black and Brown voters, dismantling reproductive rights, and passing anti-trans legislation in a number of states. Ideas like replacement theory aren’t only the province of avowed white nationalists; by now, they have been embraced by almost half of rank-and-file Republicans, fueled by anxieties over demographic changes in the United States and espoused by high-profile right-wing media voices like Fox News’s Tucker Carlson. Even with a Democrat in the White House, white nationalism is no less a threat than it was when Donald Trump was president, and systems of oppression seem to be coalescing faster than the movements against them can come together in opposition.

In the days following the Buffalo shooting, many Jews have come out in support of the Black community, organizing vigils and declaring their solidarity by connecting the massacre to their own grief and trauma from antisemitic violence. In the days after the attack, the American Jewish Committee (AJC) tweeted that “‘Great Replacement Theory’—the motivation behind the Buffalo mass shooting—was also the driver behind the Tree of Life, El Paso, and New Zealand shootings. White supremacist violence is a threat to us all.” The Anti-Defamation League (ADL)—an organization that has long connected its research and advocacy on antisemitism to issues impacting other communities, including anti-Black racism—was quick to share resources on replacement theory that were widely circulated by mainstream news outlets. ADL CEO Jonathan Greenblatt released a statement tying the incident to notions of broader safety, saying “This was yet another predictable attack by an avowed white supremacist who imbibed hateful conspiracy theories online and then turned to violent action . . . We cannot remain complacent in the face of this continuing and serious national security threat.”

But these efforts are complicated by Jewish communal institutions’ inability to divest from structures of white supremacy. The ADL’s response, for example, was met with scrutiny and distrust from some Black activists and allies following calls from a number of prominent civil rights groups to refuse to work with the organization given its anti-Palestinian stance and frequent collaboration with police departments. The skepticism followed growing concerns about the organization’s ongoing conflation of anti-Zionist groups like Students for Justice in Palestine (SJP), the Council on American-Islamic Relations (CAIR), and Jewish Voice for Peace (JVP) with violent white nationalists; its surveillance of pro-Palestine and Black Lives Matter organizers; and recent revelations that the ADL has continued to back police exchange programs with Israel despite internal concerns that they could contribute to increased police violence domestically. Earlier this year, following an outcry from its right-wing members, the ADL changed its definition of racism from “the marginalization and/or oppression of people of color based on a socially constructed racial hierarchy that privileges White people” to “when individuals or institutions show more favorable evaluation or treatment of an individual or group based on race or ethnicity.” This erasure of any structural analysis of US racial oppression in favor of a vague notion of “favorable treatment” dovetailed with a racist online harassment campaign against a Black Jewish outreach officer who Jewish far-right commentators accused of being anti-white, anti-Israel, and “un-Jewish.” The ADL never publicly addressed the anti-Black attacks on its employee; instead the employee herself publicly apologized for her past statements that were critical of Israel, declared her public support for Zionism as an ideology, and promised to collaborate with those on the right whose views she disagrees with.

Given its role as the go-to Jewish organization in moments of crisis, the ADL runs the risk of undermining trust between Black and Jewish communities. And while the ADL’s contradictions may be especially glaring, a number of other prominent Jewish and pro-Israel groups have also openly embraced policies and candidates that express support for Israel as they actively work against democratic values and seek to paper over America’s history of racism—for instance, by supporting policies that would ban discussions of race in public schools. In recent weeks, for instance, AIPAC has come under fire for endorsing dozens of Republican congressional candidates who have refused to certify the 2020 presidential election, including Rep. Elise Stefanik, a proponent of replacement theory.

This positioning is at odds with the perspective of many young Jews who are increasingly critical of Israel and supportive of racial justice organizing. But these contradictions are also rooted in structural differences between Black and Jewish experiences of white supremacy. While Black and Jewish communities are both targets under white nationalism, there are unfortunately some within the Jewish community for whom investment in whiteness ranks above any interest in shared struggle. Some Jewish commentators have found common cause with those seeking to ban the teaching of critical race theory in schools, or have themselves openly echoed replacement theory when expressing their fears about Jews of color gaining prominence in Jewish communal life. Fueled by fears of Black–Palestinian solidarity, attacks on BLM and other Black organizing are common on the Jewish right, and Black public figures in particular are heavily scrutinized and punished for their support for Palestinian rights and their opposition to Israel’s militarism. Meanwhile, popular notions of what it means to protect Jews from white nationalist violence come with their own racial baggage: Black Jews in particular have long complicated the idea that the same police brutalizing our communities are a panacea for threats to Jewish safety, highlighting our lived experiences of profiling and harassment from synagogue security. We do solidarity a disservice when we declare it without taking these realities into consideration.

Writing for the Jewish feminist publication Hey Alma this week, Paige Shoshanah, a survivor of the 2019 white supremacist attack on a synagogue in Halle, Germany, urged that “alongside meaningful partnerships, Jewish spaces need to do their own chesbon nefesh, or accounting of the soul, and ask how they are complicit in other aspects of white supremacy.” Indeed, by supporting racist institutions and white nationalist-adjacent candidates, and by backing away from any semblance of racial justice analysis in order to appease far-right donors and constituencies, Jewish institutions not only uphold the very systems that Black organizers are working to end, but also fail to guarantee Jewish safety. US security culture is unlikely to keep marginalized groups safe given that police and military forces are increasingly inundated with white nationalist ideology. In April, a security guard at a Jewish school in Ohio was arrested after threatening antisemitic violence against the community he was hired to protect. Speaking on the incident, one local Jewish leader told a local news outlet, “This guy had . . . military service, the National Guard. On paper, he was a perfect candidate to provide security. Unfortunately what people do on the dark web . . . is untraceable.”

JVP in particular attempted to challenge the logic of relying on the police to protect Jewish communities during their much-maligned Deadly Exchange campaign targeting police exchanges with Israel. While achieving “Jewish safety in solidarity” rather than militarized policing is easier said than done, JVP’s points about the risks of police exchanges and the limits of policing itself have been borne out in a number of ways. A recently revealed memo published by Jewish Currents detailed concerns by the ADL’s own staff members about its police exchange programs, saying “we must ask ourselves if, upon returning home, those we train are more likely to use force.” And there are real world cases in which police mobilizations came too late, and Jews under fire were forced to take matters into their own hands. This March, rather than continuing to wait for police as an antisemitic attacker grew more and more agitated, Colleyville Rabbi Charlie Cytron-Walker used ADL security training to extract himself and his fellow hostages from the increasingly violent standoff. This incident alone does not obviate the very real and complex need to protect synagogues against armed attackers, but it suggests the potential for an approach of protecting ourselves, and each other, rather than seeking protection from harmful institutions.

Atrocities like what unfolded in Buffalo are reminders that the fates of Jews and Black people are inextricably tied together, both by the grief and trauma we experience under white nationalist violence, and by our shared resistance to it. The stakes are only getting higher: democracy, minority rights, and even our ability to teach the truth about America’s racial history are under constant attack. But if we are to connect the Jewish struggle against antisemitism to the Black community’s struggle against anti-Black racism in any principled manner, we must begin to confront the ways our institutions’ competing policy objectives undermine Jewish anti-racist efforts. This also means confronting racism and far-right attitudes within our own Jewish communities, and distinguishing between political principles that some find challenging, like support for Palestinian rights, and an existential threat like white nationalism. The performance of solidarity in the aftermath of violence is not enough—we must embody it through action.

Newsletter
The Politics of “Jewface”
Sarah Silverman has come out against the casting of non-Jews in Jewish roles—a stance with a fraught racial history bound up with the legacy of blackface.
Rebecca Pierce
Conversation
White Savior Cinema
A conversation with Palestinian German director Lexi Alexander about Wonder Woman’s promotion of Arab stereotypes, her experiences of racism behind the camera, and the stakes of accurately portraying marginalized communities on screen.
Rebecca Pierce
Sign up for our email newsletter, featuring exclusive original content
Want original reporting and analysis on Israel/Palestine?
Sign up for the Tuesday News Bulletin.