The ADL Doubles Down on Opposing the Anti-Zionist Left

CEO Jonathan Greenblatt argued that Palestine-solidarity groups are “the photo inverse of the extreme right,” and promised that fighting them would become more central to his mission. 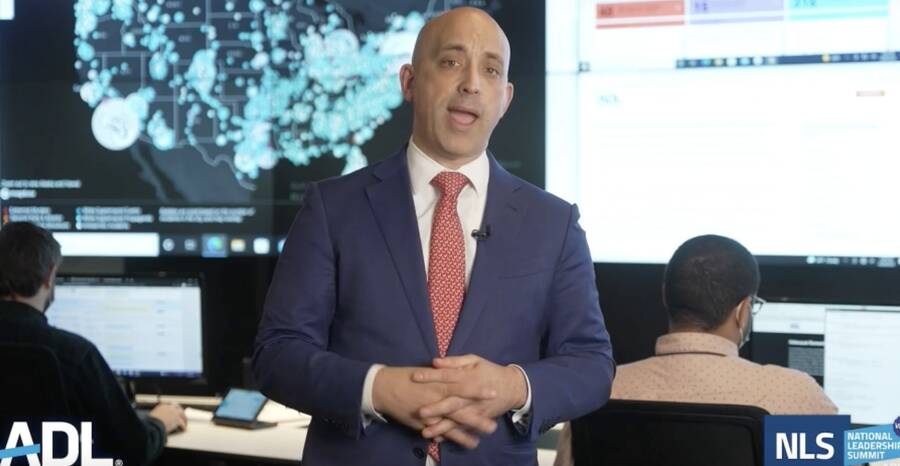 The ADL considers Palestine-solidarity groups Jewish Voice for Peace (JVP) and Students for Justice in Palestine (SJP), as well as Muslim civil rights organization Council for American Islamic Relations (CAIR), to be “extremists” because of their anti-Zionist advocacy, CEO Jonathan Greenblatt announced at the organization’s annual National Leadership Summit on Sunday.

Speaking directly into the camera in a pre-recorded speech, Greenblatt said that “SJP, JVP, and CAIR . . . epitomize the radical left, the photo inverse of the extreme right that ADL long has tracked.” The ADL plans to apply “more concentrated energy toward the threat of radical anti-Zionism,” he said. Though the organization has long maintained that anti-Zionism “isn’t always necessarily antisemitic,” as noted in its online glossary, Greenblatt rejected that view on-screen. He said that “anti-Zionism is antisemitism,” calling anti-Zionism an “ideology . . . rooted in rage . . . predicated on one concept: the negation of another people.” (The ADL did not respond to questions from Jewish Currents about this change by press time.)

Greenblatt’s speech indicated that the ADL is doubling down on a “both sides” analysis of antisemitism that frames left-wing censure of Israel as a danger equivalent to right-wing neo-fascist ideologies. The organization has long been known for its work tracking far-right extremism and white supremacist antisemitism; in the last few years, it has consistently argued that the far right is responsible for the lion’s share of extremist attacks in the US. But ever since last May, when Israel’s bombing of Gaza was accompanied by a series of widely publicized attacks on Jews in the US, Greenblatt has increasingly emphasized what he claims are the dangers coming from the political left: “For four years [antisemitism] seemed to be stimulated from the political right, with devastating consequences,” but in last year’s attacks, “no one is wearing MAGA hats,” he told the New York Times in May 2021. On Sunday, Greenblatt suggested that JVP, SJP, and CAIR shared responsibility for Israel-related anti-Jewish incidents because their rhetoric can “manifest in the real world and impel individuals to act violently.” He emphasized that working to counteract the anti-Zionist left will be a key part of the ADL’s efforts going forward, suggesting a shift within the organization toward a more overt mission of Israel advocacy.

“Some will claim that putting these groups in the same category as right-wing extremists somehow makes ADL anti-Muslim or anti-Palestinian,” he said. “This is also a lie, one as toxic and false as the claims by alt-right bigots that calling out their extremism makes ADL anti-Christian or anti-white.” Though he acknowledged that leftist organizations “might not have armed themselves or engaged in an insurrection designed to topple our government” like those on the right, he insisted that the ADL’s focus on them was justified, because, he claimed, they “indisputably and unapologetically regularly denigrate and dehumanize Jews.”

Listing his specific complaints about the named organizations, Greenblatt argued that SJP and JVP had used “dangerous language” in response to recent rising violence in Israel/Palestine—including Palestinian attacks on Israeli civilians—by calling to “globalize the intifada,” a term for Palestinian resistance to the Israeli regime. He also cited CAIR San Francisco executive director Zahra Billoo’s description, in a speech in November 2021, of Jewish Federations and Zionist synagogues as examples of “polite Zionists” that pro-Palestine Muslim organizations should not work with.

The ADL plans to bring the full scope of its capabilities to bear upon left-wing opponents of Israel, Greenblatt said. It will “expose their ideas” through research; “hold them accountable” through litigation; flex its “advocacy muscles” to ensure that policymakers support Israel; and leverage its “communications know-how” to share its message “with the world.”

The targets of the ADL’s criticism emphasized the inaccuracy of comparing them to right-wing extremist groups, accusing the organization of attempting to shut down legitimate political speech about Israel. “What Greenblatt is really announcing is that the ADL is dropping its pretense of dismantling antisemitism and protecting the American Jewish community and is instead solely focused on shielding the Israeli government from accountability,” Stefanie Fox, executive director of JVP, said in a statement to Jewish Currents.

CAIR Deputy Director Edward Ahmed Mitchell said that Greenblatt’s remarks constituted a “desperate” attempt to hit back against growing popular support for the Palestinian cause. “Mr. Greenblatt and the ADL . . . see the writing on the wall: Every day, more Americans—including many Jewish Americans—recognize that our nation must stop enabling the Israeli apartheid government’s oppression of the Palestinian people,” Mitchell wrote in an emailed statement to Jewish Currents. “Apartheid is always doomed to fail and, God willing, no lie Mr. Greenblatt tells will change that fact.”

SJP’s national steering committee told Jewish Currents in a statement that its chapters, which are led by students on college campuses, frequently “face baseless attacks by right-wing opposition.” Pointing toward the ADL’s history of advancing policies that “primarily target Black, Arab, and Muslim communities” through its partnerships with law enforcement, the statement described the ADL’s attacks on SJP as “deeply racialized,” adding that Greenblatt’s comments “highlight the ADL’s pro-oppression politics and practices on campus.”

Progressive Jewish activists argue that equating right-wing antisemitism with left-wing criticism of Israel can have dangerous consequences. For one thing, it may obscure the real threat from the far right: An April 2021 working paper by Eitan Hersh, an associate professor of political science at Tufts University, found that results from a comprehensive study of 3,500 American adults “convey an unambiguous message that antisemitic attitudes are far more prevalent on the right”; in recent years, the perpetrators of major deadly antisemitic incidents for which a political motive could be discerned—like the 2018 shooting at the Tree of Life synagogue in Pittsburgh and the 2019 shooting at the Chabad in Poway, California—have been linked to the white supremacist right. At the same time, comparing left-wing anti-Zionist organizations such as JVP and SJP to right-wing neofascist groups can serve as a justification for suppressing their political activism and speech.

The ADL has frequently argued that leading figures engaged in Palestine-solidarity work should be considered antisemites. On several occasions, Greenblatt has censured Rep. Rashida Tlaib, a Palestinian American, for her criticisms of Israel—for example, last year, he claimed that it was “dangerous” for Tlaib to accuse Israel of ethnic cleansing. This past January, the ADL created an entire page devoted to denouncing Mohammad el-Kurd, a Palestinian poet and activist from the East Jerusalem neighborhood of Sheikh Jarrah who has gained prominence for protesting Israeli settlers’ attempts to take over his family’s home. (In his speech on Sunday, Greenblatt named el-Kurd and accused him of saying things he has never said, such as that “Jewish Israelis and Zionists eat the organs of Palestinians”; el-Kurd has written, in his poetry collection Rifqa, that functionaries of the Israeli state “harvest organs of the martyred,” an apparent reference to documented cases from the 1990s in which the Israeli military harvested organs from Palestinian corpses.) This February, when Amnesty International released a groundbreaking report accusing Israel of practicing apartheid, the ADL condemned the report as antisemitic without offering any substantive refutation of its charges.


When Greenblatt, previously a special assistant to President Obama, took the ADL’s top job in 2015, some commentators suggested that he would steer the organization in a different direction than his predecessor, longtime head Abe Foxman, who was known for targeting Arabs and Muslims and defending the Israeli government’s actions. Under Greenblatt, the ADL seemed poised to become a “friendlier place” to Arabs and critics of Israel, and one that was “serious about a future without an [Israeli] occupation,” Hussein Ibish, a senior resident scholar at the Arab Gulf States Institute and past director of communications for the Arab-American Anti-Discrimination Committee, told Jewish Currents in 2021. At the same time, former ADL employees also told Jewish Currents that Greenblatt appeared easily swayed by donors who pressed for more conservative positions on Israel/Palestine.

Ultimately, the ADL under Greenblatt’s tenure has maintained and even expanded Foxman’s support for the suppression of anti-Zionism. In recent years, the organization has backed a bill to adopt the controversial Interational Holocaust Remembrance Alliance “working definition” of antisemitism—which covers some criticism of Israel that many view as protected political speech—as a federal civil rights standard, and has championed legislation to prohibit American individuals’ and companies’ participation in certain international efforts to boycott Israel. (Foxman had opposed anti-BDS legislation.) In 2018, the ADL used a private security firm to surveil anti-Zionist organizers in Washington, DC—including local chapter members of JVP and Black Lives Matter, according to a Jewish Currents investigation.

The organization’s pro-Israel advocacy has frequently complicated its civil rights efforts, which include educational programs on racial justice and advocacy for pro-immigrant US border policies. Employees of the ADL’s civil rights division have attempted to dissent internally from its past attempts to crack down on anti-Zionist speech. Progressive and civil rights groups have also denounced the ADL’s close relationships with law enforcement: JVP, in particular, has waged a long-running campaign against the ADL’s practice of sending delegations of US police officers to train in Israel. In August 2020, a series of pro-Palestinian and abolitionist activist groups formed a Drop the ADL campaign, which argued in an open letter that the ADL “has a history and ongoing pattern of attacking social justice movements led by communities of color, queer people, immigrants, Muslims, Arabs, and other marginalized groups, while aligning itself with police, right-wing leaders, and perpetrators of state violence,” and that therefore progressives should “reconsider the Anti-Defamation League (ADL) as a partner in social justice work.”

Internally, ADL senior staff have argued that the organization should take seriously the possibility that its police delegations to Israel may increase officers’ use of force upon their return home, according to a memo obtained by Jewish Currents and The Guardian. But on Sunday, Greenblatt dismissed critics of the ADL’s relationship with law enforcement, and described the Drop the ADL effort as a “slanderous campaign . . . that uses innuendo and untruths to libel our organization and assert that we somehow are not a civil rights organization.”

In his speech, Greenblatt likened today’s anti-Zionist left to the Communists of the Cold War, arguing that the distinction between anti-Zionism and antisemitism was a contrivance “pioneered by Soviet disinformation specialists.” “The sleight of hand, replacing the word Jews with Zionists to claim some type of perceived moral high ground—that wasn’t invented in Berkeley or Brooklyn,” he said, “but rather in Moscow . . . It was propaganda and prejudice then, and it is propaganda and prejudice now, even if the lies today are repeated by DSA boosters rather than Kremlin supporters.”

Ultimately, Greenblatt’s remarks suggested that, going forward, the anti-left efforts will be a key priority for the ADL. “We must act against the anti-Zionist extremists,” Greenblatt said, “just as we have against other extremists.”