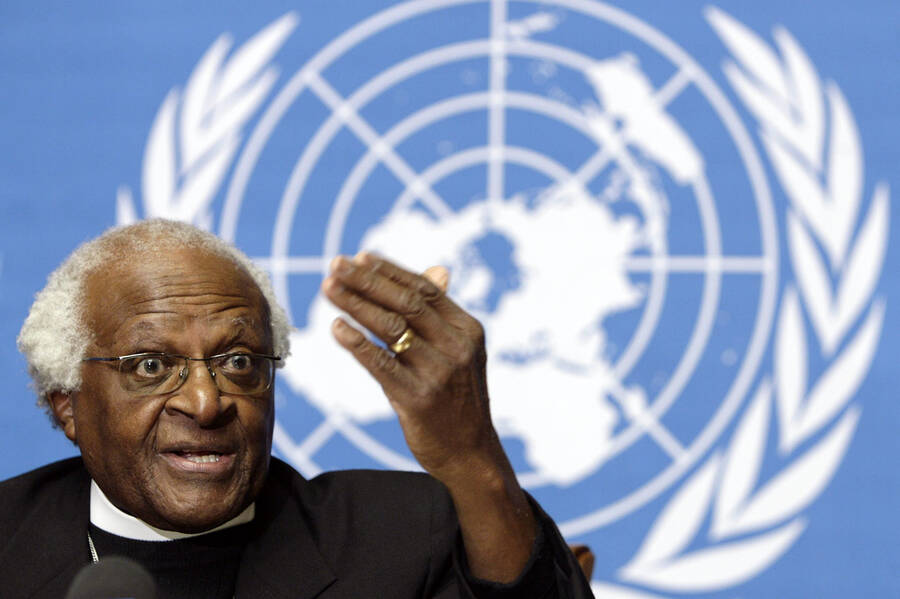 ON SUNDAY, Archbishop Desmond Tutu, who crusaded against apartheid and helped lead South Africa into a new democratic era, died at the age of 90. Leaders around the world, from the Dalai Lama to the mayor of New York, issued tributes to Tutu after news of his death broke.

By contrast, Israeli officials and the American Jewish establishment generally stayed silent. But they weren’t so quiet over the past two decades, as Tutu’s repeated denunciations of Israel’s rule over Palestinians and his comparisons between the South African and Israeli versions of apartheid earned him the ire of Jewish leaders in both countries, as well as the United States. Tutu’s pronouncements sparked a particularly intense reaction; criticism hurts more when it comes from someone widely lionized as a moral beacon.

Israel was one of South Africa’s closest allies during apartheid, even offering to sell the apartheid regime nuclear warheads in 1975. As early as the 1980s, the Anti-Defamation League kept a watchful eye on the US anti-apartheid movement as activists criticized Israel’s close relationship with Pretoria. In 1960, the ADL hired a private spy named Roy Bullock to collect information on Arab American activists and the broader left, which he did for the next 30 years. As Sasha Polakow-Suransky notes in his book The Unspoken Alliance: Israel’s Secret Relationship With Apartheid South Africa, the ADL dispatched Bullock “to attend the meetings of U.S.-based anti-apartheid groups, collect their publications, and take down the license plate numbers of leaders’ cars—including visitors such as Archbishop Desmond Tutu and South African Communist Party leader Chris Hani.”

The attacks escalated as the archbishop grew more outspoken about Israel’s military occupation after the end of apartheid in South Africa. In 2002, Tutu gave a speech to a Boston conference calling for an end to Israel’s occupation in which he said that, while “Israel has a right to secure borders,” a recent trip to Israel/Palestine reminded him “so much of what happened to us black people in South Africa.” The checkpoints in the occupied West Bank humiliate Palestinians, he said, comparing them to what South Africans experienced “when young white police officers prevented us from moving about.” He also noted that some were scared to forthrightly criticize Israel because of the power of the “Jewish lobby.”

The next year, student groups at Yeshiva University’s Cardozo Law School decided to honor Tutu. In response, American Jewish officials joined some right-wing Jewish students in criticizing the decision. Mark Weitzman, of the Simon Wiesenthal Center, told The New York Jewish Week that Tutu shouldn’t be honored because he “blames Israel disproportionately for tensions in the Middle East.” ADL head Abe Foxman was even harsher: “He has flirted with anti-Semitism and his condemnations have been angry and nasty.”

In 2005, inspired by the global movement to isolate South Africa’s apartheid regime, Palestinian civil society groups issued a call to boycott, divest from, and sanction Israel. Tutu became one of the BDS movement’s most prominent endorsers. Seven years after the BDS call first emerged, the United Methodist Church debated whether to divest their funds from corporations that do business with the IDF. Tutu issued an open letter, urging the church “to disinvest from companies who benefit from the Occupation of Palestine. This is a moral position that I have no choice but to support, especially since I know of the effect that Boycotts, Disinvestment and Sanctions had on the apartheid regime in South Africa.” As part of Tutu’s argument, he wrote that “The situation in Israel and Palestine pains me greatly since it is the place where God formed a very particular relationship with a particular group of people; Hebrews who were oppressed as slaves in another land. As time moved on, this people disobeyed God and time and time again the prophets had to call them back to their deepest values.” In response, the ADL argued Tutu “veered into classical religion-based anti-Semitism.” (The church declined divestment that year, but the church pension board removed investments from Israeli banks that fund illegal West Bank settlements in 2016.)

Nineteen years after Tutu first raised the apartheid comparison—a parallel originally raised by Palestinian intellectuals and, in fact, by South African apartheid officials themselves—the rest of the world is beginning to catch up. In January, the leading Israeli human rights group B’Tselem proclaimed that Israel had instituted an “apartheid regime.” In April, Human Rights Watch issued its own report, arguing that certain Israeli abuses targeting Palestinians made Israel guilty of “the crimes against humanity of apartheid and persecution.”