There Is No Right to a State

The American Jewish establishment argues that denying Jews a state of their own violates their right to national self-determination. They’re wrong. 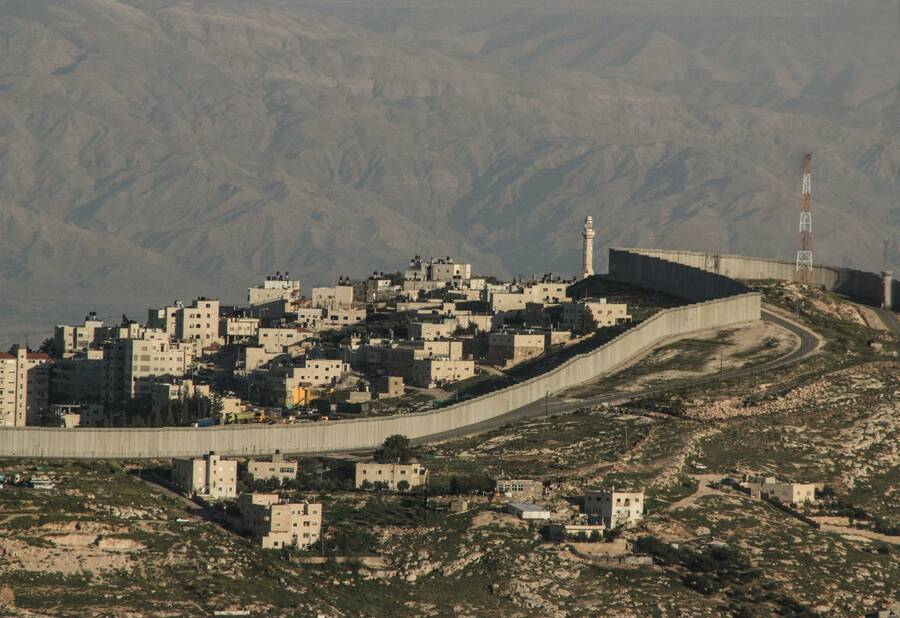 “LET’S BE CLEAR,” tweeted the Democratic Majority for Israel (DMFI) last month, “Arguing that the Jewish people is the only people in the world not entitled to self-determination is a form of antisemitism.” It’s a claim that in recent years has become ubiquitous in American Jewish establishment discourse. On the same day as DMFI’s tweet, Jonathan Greenblatt, CEO and national director of the Anti-Defamation League (ADL), penned an op-ed declaring that “denying the Jewish people the same right to self-determination that you would extend to other people” constitutes one of the “modern manifestations of the oldest hatred, anti-Semitism.” Earlier this month, the Conference of Presidents of Major American Jewish Organizations wrote a letter to Joe Biden requesting that “all federal departments and agencies should, in their work, consider the IHRA [International Holocaust Remembrance Alliance] working definition of antisemitism (with examples).” Those examples include “[d]enying the Jewish people their right to self-determination.”

The timing of this push is not accidental; it is the American Jewish establishment’s response to the death of the two-state solution. For roughly a quarter-century—from the Palestine Liberation Organization’s recognition of Israel in 1988 until John Kerry’s last-gasp bid to broker the creation of a Palestinian state in 2014—the mainstream Palestinian national movement did not challenge Israel’s existence, which meant pro-Israel groups did not need to aggressively defend it. But in recent years, that has changed. As Israeli settlement construction has made the creation of a viable Palestinian state in the West Bank and Gaza Strip increasingly unlikely, a new generation of Palestinian activists has begun advocating one equal state between the Jordan River and the Mediterranean Sea. Rather than challenge the status quo—one unequal state in which millions of Palestinians lack basic rights—establishment American Jewish groups have reacted by insisting that advocating for one equal state, which favors neither Jews nor Palestinians, constitutes antisemitism because it denies Jews the right to self-determination.

Their efforts have proven successful. The US Departments of State and Education now use the IHRA’s definition of antisemitism, and legislation incorporating the IHRA definition into federal anti-discrimination law enjoys the support of prominent Democratic and Republican senators. Similar campaigns are succeeding worldwide: Twenty-eight other countries—including the United Kingdom, Germany, and France—have adopted the definition. The claim that opposing Jewish statehood constitutes bigotry because it denies Jews the universal right of national self-determination has become a widely accepted axiom of American and global political discourse.

Although the idea of national self-determination has roots in the 19th century, it assumed center stage in the 1910s. Woodrow Wilson, who was determined to remake world affairs after the cataclysm of World War I, believed that building global peace required replacing Europe’s multinational empires, which had shattered during the war, with new countries that embodied the national yearnings of individual peoples. “The countries of the world,” Wilson declared in a 1919 address, “belong to the people who live in them,” and “no body of statesmen, sitting anywhere . . . has the right to assign any great people to a sovereignty under which it does not care to live.”

The idea had its detractors. Wilson’s own secretary of state, Robert Lansing, recognized that self-determination—if defined as independent statehood for every people that wanted it—was a concept “loaded with dynamite.” Too many peoples in too many overlapping places desired their own countries. There was no uncontested way to decide which peoples deserved which land, or even which group of people constituted a people deserving of a state. Granting self-determination to one group might mean trampling the rights of others.

In the end, World War I produced many new countries but no right to national self-determination. The League of Nations, which the US refused to enter, said nothing about the concept in its charter. In 1917, the judicial body created by the League ruled that “international law does not recognize the right of national groups, as such, to separate themselves from the State of which they form a part by the simple expression of a wish.” Under international law, there was no right to a state of one’s own.

Yet the equation of self-determination with sovereignty resurfaced old problems. In multi-ethnic countries cobbled together by colonial powers, secessionist movements—like the Igbo, who broke away from Nigeria in 1967 to create the new country of Biafra—invoked the very principle that nationalist movements had cited to gain freedom from European rule. Seeking to cork the secessionist bottle, the UN in 1970 declared that “the principle of equal rights and self-determination of peoples constitutes a significant contribution to contemporary international law,” but several paragraphs later, added, “Nothing in the foregoing paragraphs shall be construed as authorizing or encouraging any action which would dismember or impair, totally or in part, the territorial integrity or political unity of sovereign and independent States.” In other words, self-determination required limits.

It remains that way today. A quick glance at the actual condition of the world reveals the absurdity of claiming that national self-determination means all peoples enjoy the right to their own state. The political scientist Ryan Griffiths recently estimated that the world contains 60 active secessionist movements. Yet few people suggest that opposing some or all of these movements to create independent countries constitutes bigotry against the people they claim to represent. Neither DMFI nor the ADL has called Spanish Prime Minister Pedro Sanchez a bigot for refusing a vote on independence for Catalonia, nor Boris Johnson for refusing a new referendum on statehood for Scotland, nor Narendra Modi for refusing to allow a plebiscite on sovereignty for Kashmir. When Israel’s defenders define national self-determination as the right to a state of one’s own—and then accuse Israel’s critics of bigotry for denying that right to Jews alone—they are inventing a right that does not exist.

National self-determination can only constitute a universal right if it means something less than independent statehood. Think about the term itself. For individuals, “self-determination” means autonomy, one’s right to determine one’s own affairs. But there are limits to that right because individuals have to respect others’ autonomy too. It’s the same with nations, which are large groups of people that feel some collective solidarity and want to run their own affairs. Political theorists who believe there is a right to national self-determination argue that there is value in being able to educate your children in your own language, to be governed by people who share your identity, and to see your culture reflected in the public square. But the right of self-determination for a nation—like the right of self-determination for an individual—is limited by the rights of others. Create a state that privileges one people in a territory that contains multiple peoples, and you’ll likely deny members of those other peoples both the individual right to be treated equally under the law and the collective right to run their own affairs.

For that reason, most political theorists insist that national self-determination cannot mean the right to your own state. “The right to national self-determination is meant to assure individuals of their rights to preserve their national life,” Israeli political theorist Yuli Tamir writes. “[U]nder no circumstances does this imply that they must always do so within the framework of an independent state.” Oxford political philosopher David Miller goes even further. “Having a state of its own may, under certain conditions, be the preferred way for a group capable of self-determination to achieve it,” he writes, “but often there will be better alternatives available.” Defenders of the Israeli government heartily endorse this view when it comes to Palestinian self-determination. In a recent essay, Professor Eugene Kontorovich, a member of Israel’s right-leaning Kohelet Policy Forum, argued that Palestinians don’t deserve their own state because “self-determination in international law doesn’t typically mean the right of a people to have its own country. It can be satisfied by some degree of self-governance, and autonomy in internal matters such as language and culture.” If that’s true for Palestinian self-determination, it’s true for Jewish self-determination too.

It was once possible to argue credibly that the best way to satisfy the Jewish and Palestinian rights to self-determination was for both peoples to control their own states. Yet even this solution would have entailed real costs to other rights. It would have meant second-class citizenship for those Palestinians (often called “Arab Israelis”) who lived in a state that privileged Jews over them. It would have curtailed the right of Palestinian refugees and their descendants to return—a right recognized by the UN—to a Jewish state that sought to maintain its demographic majority. It might also have infringed upon the rights of Jewish settlers living in the territory on which Palestinians established their country, since a Palestinian state in the West Bank and Gaza Strip might have discriminated against Jews, or even expelled them.

Nonetheless, when this vision of self-determination via partition appeared feasible, it had important advantages. It enjoyed significant support among both Jews and Palestinians. It would have allowed both peoples substantial control over their own affairs. And by creating two relatively homogenous states, it might have made governing each easier. But by claiming much of the land on which Palestinians would build their state, Israel has made dual self-determination through two adjacent countries impossible. Instead, Israeli Jews enjoy maximum self-determination—a state that privileges them—in a territory where a roughly equal share of the population is Palestinian.

Given the impossibility of a two-state solution, the only way to respect both the Jewish and Palestinian rights to national self-determination is to define that right as autonomy, not sovereignty. Jews and Palestinians could exercise that autonomy in a binational state that gave each the authority to preserve its language and culture. Governing binational states is difficult.

The Biden administration must soon choose whether to accept the Jewish establishment’s claim that opposing Jewish statehood constitutes antisemitism. If it does, it will legitimize the perverse argument that treating Jews and Palestinians equally constitutes bigotry but privileging Jews over Palestinians does not. And, in so doing, it will delay Americans’ much-needed reckoning with the current one-state reality in Israel/Palestine, where one people’s right to self-determination comes at the cost of another’s.

Newsletter
The Hijacking of Atonement
In Germany, the legacy of the Holocaust is used to silence critics of Israel.
Peter Beinart
Report
How a Defender of Palestinian Rights Lost His Way
As the Washington director of Human Rights Watch, Tom Malinowski fought for justice in Israel-Palestine. All that changed once he got to Congress.
Peter Beinart
Sign up for our email newsletter, featuring exclusive original content