The Jewish Left on Jeopardy!

An interview with three-time champion and longtime activist Emma Saltzberg. 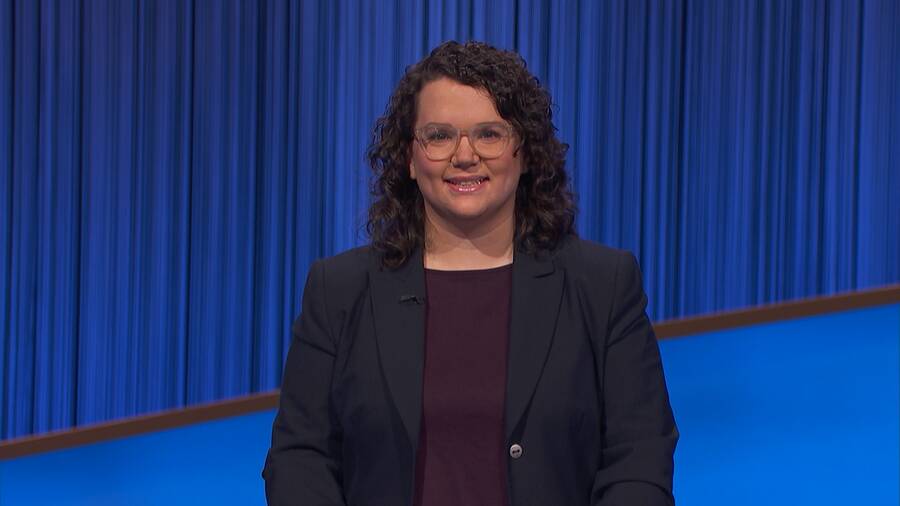 For this week’s newsletter (subscribe here!), I interviewed Jewish Currents contributor and longtime IfNotNow activist Emma Saltzberg. Emma (who, full disclosure, is also a friend) is a newly crowned three-time Jeopardy! champion, having won a total of $56,199 on episodes of the popular game show that aired this month before coming in second behind Lawrence Long, who went on to enjoy his own three-game winning streak. She and I discussed how she got involved in left-wing Jewish activism, her experiences on Jeopardy!, and how she hopes to use her platform to speak out for the causes that matter to her. Our conversation has been edited and condensed.

David Klion: Talk about your Jewish background and how it led you to left-wing activism.

Emma Saltzberg: I grew up on the Main Line outside Philadelphia. I went to Hebrew school at a conservative-ish/reform-ish synagogue called Beth Am Israel through 10th grade and got confirmed—I was not always that enthusiastic, but in retrospect, I’m grateful for it. Then I went to Amherst College, where I was one of three or four people who went to Hillel Friday night services every week, and I was appointed Hillel vice president my sophomore year. I made a deal with the rabbi and the other board members that I wasn’t going to do anything related to Israel. At that point in my life, it wasn’t because I understood and felt solidarity with the struggle of the Palestinian people; I was just tired of people trying to get me to care about this place that as far as I could tell had nothing to do with me. I didn’t have close relatives there. Growing up in a liberal Jewish community during the George W. Bush years, the idea of separation of church and state was very important to me, and I was confused about why there was such intense pressure to support a state where rabbis were part of the government.

DK: When and how did you start to adopt a more critical posture toward Israel?

ES: By the time I graduated college, I really didn’t want anything to do with Jewish community. I moved to New York in 2014, and I was following the story of the three kidnapped Israeli boys, the hunt for them, and the burning of Mohammed Abu Khdeir, and feeling more upset by it than I would have if I truly believed that none of this had anything to do with me. I saw some Facebook posts from friends in Philadelphia saying they wished they could attend an event in New York about this, which turned out to be the first ever IfNotNow action. I remember looking at myself in the reflection of a store window on the way home from work and realizing I wouldn’t be able to sleep that night if I didn’t go to this action the next day. So I showed up at my lunch break outside the Midtown office of the Conference of Presidents of Major American Jewish Organizations, wearing all black. I joined in the Mourner’s Kaddish for everyone who was being killed in Israel/Palestine, and I heard Simone Zimmerman—now my friend and comrade [ed. and a Jewish Currents Advisory Board member]—read this letter from young Jews calling on our community to live out its moral values and to oppose this violence.

Before that, I literally didn’t know that you could be Jewish that way. I got invited to come to a planning meeting two days later. A bunch of IfNotNow members got arrested doing civil disobedience the following Monday morning, and by the following Friday, I had coordinated a radical Shabbat Service in Washington Square Park attended by 250 to 300 people. One of the other organizers asked me what I do, and I said I was a research assistant. He said, that’s not this!

DK: How do you think the Jewish left has developed in the more than seven years since then?

ES: I think we have built an incredible amount of power. Today, it’s impossible to write about the Jewish community without acknowledging the generational and ideological shifts that have taken place. There’s still work to be done, of course, but I think we should be really proud of what we’ve accomplished so far.

I do think sometimes people conflate particular organizations that I’ve been part of with the wider Jewish left, and I don’t think that’s fair. I want to acknowledge that there’s a whole swath of people who hold and have held politics at least as radical as mine and who have been in these trenches for a long time, and from whom I’ve learned a lot. So I think it’s really important both to celebrate the incredible growth of the Jewish left—and the broader US left—in the last few years, and also not to let that eclipse everything that was there before.

DK: Turning to Jeopardy!, how has your overall experience with the show been?

ES: It’s been incredible! I was not expecting this wave of goodwill from everyone who’s ever met me; it’s been really astounding and moving. I don’t think I ever would have taken the test to go on the show without intense nudging from my partner. But once I took the test, I got a good chunk of the questions right; once I did an audition, I felt like I’d done a good job; and once I got the call, I realized I could actually win. I’m a pretty competitive person! At the same time, it’s such a purely fun thing. Even toward the end of my first game, when it was looking like I was going to lose, it still felt like a total gift.

DK: And now you’re a three-time champion and everyone is reaching out to you, and you have a platform and a claim to fame. What kind of opportunities do you see this giving you in terms of your activism, and have you gotten any blowback or criticism from people who disagree with your politics?

ES: I’ve been very moved to see people following the example of Lawrence Long, who beat me in Monday’s game, by donating to IfNotNow in my honor. I would encourage folks to also support Palestine Legal, as well as the Western States Center, where I have a fellowship, in its fight against white nationalism. These are organizations that are deep in the trenches, supporting activists who face real threats.

I don’t want to be a super-public person long term, but I would be remiss not to take this particular moment to speak about the issues that are important to me. At the same time, I do not anticipate taking my Twitter off private mode anytime soon. I’m thrilled and grateful for all of this attention and trying to direct it to the things I want people to be paying attention to, and I’m also so ready for people to stop paying attention to me.

As far as blowback, there are a lot of Twitter accounts I had blocked already that go after Jews who support Palestinian liberation. There’s some Hasbara guy making hay out of the fact that I didn’t get the Tel Aviv question in the last game, which is very funny, because he’s just demonstrating that he doesn’t understand how the Jeopardy! buzzer works. There are plenty of times when contestants know the answer and don’t manage to buzz in first. There are also right-wingers asking why I didn’t boycott the show over the host, Mayim Bialik, which shows that they don’t know how the call to boycott works. And there are strangers on Instagram calling me an ugly, self-hating Jew—you know, totally normal, expected stuff. I wouldn’t have even mentioned it if not for the reaction of Lawrence; he was so horrified to see what people were saying about me.

But there are so many people who get it so much worse than I do, and who experience real material consequences. I’m on the Canary Mission list, but that has never harmed my life prospects in any way. There are young people, especially Palestinians and student activists of color, who face surveillance and harassment that can be really damaging and scary. I’m fine, but people should be ashamed of how more vulnerable people are harmed just for taking very reasonable and righteous stances.

DK: You mentioned Mayim Bialik, who—at least as recently as Israel’s assault on Gaza in May 2021—identifies as a liberal Zionist. To quote her directly: “Israel deserves to live as an autonomous free and safe nation. The Palestinian people deserve the same. What is happening now by extremists on both sides is tragic. It’s horrendous. It’s unacceptable. And I have to hold out hope that peace and justice will prevail.” Did you discuss any of this with her? And insofar as her position is a common one in many Jewish communities, how would you respond to it in general?

ES: I definitely did not bring any of this up when we taped the shows; that wasn’t what I was there to do, and I don’t think it would have been productive. She was kind and friendly and professional, and she’s really good at her job. I didn’t need to express that disagreement directly to her, but I’m trying to use the small platform that I’ve gotten to articulate where I stand.

Obviously, I disagree with her, and to me that position is not a tenable position. What is missing from what you quoted is any analysis of power. There’s no real acceptance of what would be needed to shift the balance in order to push the Israeli government into making any kind of meaningful concessions. Some folks disagree with me on this, but for me, what label people choose to apply to themselves is way less important than what they materially do. If someone calls themselves a liberal Zionist but supports restricting aid that goes to funding the Israeli military, I’m with that! It’s not about what you call a position, it’s about what the position makes possible.