The International Court of Last Resort 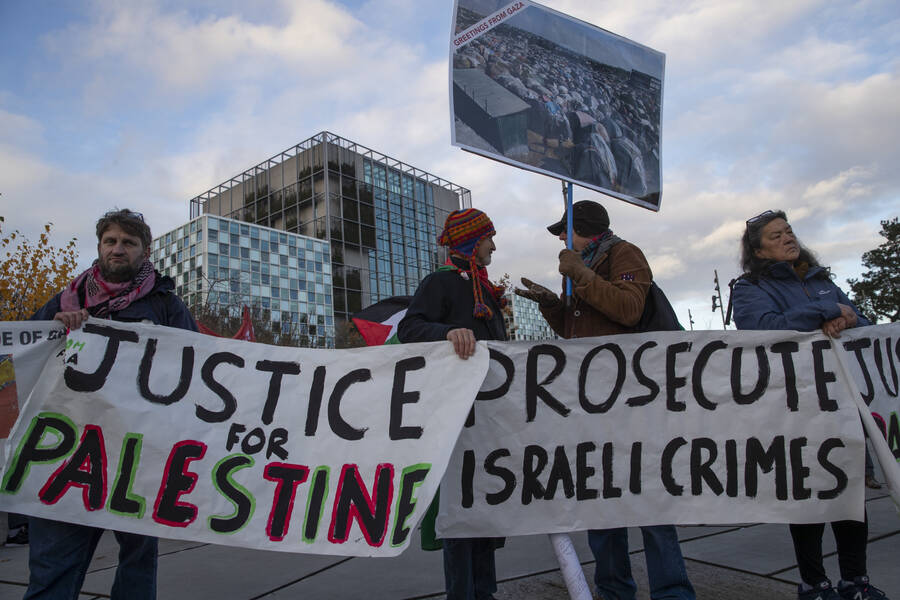 Demonstrators carry banners outside the International Criminal Court in 2019, urging the court to prosecute Israel’s army for war crimes.

Last Tuesday, ten of the most prominent Israeli human rights organizations—including B’Tselem, Adalah, and Yesh Din—sent a letter to International Criminal Court (ICC) prosecutor Karim Khan. The groups praised him for saying in December that he planned to “visit Palestine” sometime this year, but urged him to speed up the ICC’s ongoing war crimes probe in Israel/Palestine, which aims to determine whether war crimes were committed in the region by Israeli forces and Palestinian militant groups, and to hold perpetrators accountable. “We are now more than seven years since the beginning point of this process,” the letter stated. “Justice delayed is justice diminished . . . A nimbler court is, indeed, key.”

The letter was only the most recent attempt to put pressure on the ICC. In recent years, various civil society groups—including the Public Committee Against Torture, a signatory to the letter from Israeli rights groups—have sent the ICC a voluminous record of alleged war crimes committed by Israeli forces in Israel/Palestine. One of the latest submissions was sent in December by the media network Al Jazeera, calling on the international court to investigate and prosecute those responsible for the killing of Palestinian American journalist Shireen Abu Akleh. Palestinian human rights group Al Haq has sent the ICC seven separate submissions on alleged Israeli war crimes over the past seven years, including on Israel’s killing of civilians and destruction of civilian property in Gaza; in June 2022, the Public Committee Against Torture became the first ever Israeli human rights group to submit evidence to the ICC, documenting the complaints of 17 Palestinians allegedly tortured by Israeli security forces.

These groups are hoping to provide a roadmap that will steer ICC investigators toward the prosecution of specific culprits for specific crimes. “We’re basically just trying to show them where to look, and where we think their investigation should lead them,” said Michael Schaeffer Omer-Man, director of Israel/Palestine research for Democracy for the Arab World Now, another group that has sent evidence to the ICC. Considering the volume of global war crimes and the ICC’s limited resources for investigations, the burden often falls to human rights groups to build the case against perpetrators. “They’re completely dependent on civil society [groups],” said Brad Parker, senior advisor on policy and advocacy for Defense for Children International-Palestine (DCI-P), which has submitted evidence to the ICC focusing on the torture and killing of Palestinian children by Israeli forces.

In publicizing the fact of these submissions—if not the details of their contents, which include private information about victims—civil society groups are also attempting to provide a counterweight to the intense pressure the ICC faces from countries like the United States, and Israel itself, to drop its probe. Israel has lobbied European states to cut funding to the ICC in response to its investigation, while Biden administration officials reportedly urged Palestinian Authority President Mahmoud Abbas to stop asking for the ICC’s intervention. In response, human rights groups are “trying to ensure that the ICC has all the information and tools it needs to give it a fighting chance of withstanding the political pressure that has paralyzed every other institution,” said Schaeffer Omer-Man.

The ICC was established in 2002 by the Rome Statute, a treaty signed by 123 states that now fund much of the court’s activity. It is the only international court tasked with prosecuting genocide, crimes against humanity, and war crimes, aiming to take action only when the state under investigation is either unwilling or unable to investigate itself. Israel’s Supreme Court has repeatedly given judicial approval to Israeli practices in the occupied Palestinian territories that human rights groups say are illegal under international law, ranging from forcible displacement of Palestinians to opening fire on protesters. Meanwhile, human rights groups say that Israel’s military law enforcement system serves to shield its soldiers from consequences for unlawful killings of Palestinians. In their search for accountability, Palestinian rights groups have not turned solely to the ICC: Some have brought cases of alleged war crimes to European courts in countries where victims had citizenship or in states with “universal jurisdiction” laws that allow for the prosecution of anyone allegedly responsible for grave international crimes. But those efforts have universally failed. “Palestinians have exhausted all other options,” said Tahseen Elayyan, a legal researcher with Al Haq. “The ICC is the last resort.”

In 2015, the “state of Palestine”—the term the Palestinian Authority has used to refer to the West Bank, East Jerusalem, and Gaza since the passage of a 2012 UN resolution granting Palestine non-member observer state status in the international body—joined the Rome Statute, thus accepting the ICC’s jurisdiction over war crimes committed in the territory. But questions around whether Palestine is a state under international law, and thus subject to the Rome Statute, have lingered. In 2019, Fatou Bensouda, the ICC prosecutor at the time, concluded that war crimes were occurring in Palestine, but asked a panel of ICC judges to examine whether the court had jurisdiction there. ICC member states Australia, Austria, Brazil, Canada, Czech Republic, Germany, Hungary, and Uganda—all staunch allies of Israel at the time—submitted briefs to the court arguing that it did not have jurisdiction.

The US, while not party to the Rome Statute, has also repeatedly inveighed against any ICC investigation into Israel; in 2020, Israeli officials urged Secretary of State Mike Pompeo to follow through on a Trump plan to impose asset freezes on ICC officials, which the administration carried out in September 2020. Trump’s executive order imposing the sanctions attributed the decision to the ICC investigation into potential war crimes committed by US officials in Afghanistan, but a White House statement referenced “politically-motivated investigations against us and our allies, including Israel.” “That was unprecedented, in terms of the willingness of the US government to use one of the most coercive tools it has: restricting access to the US financial system,” said Liz Evenson, international justice director for Human Rights Watch. (The Biden administration reversed the ICC sanctions, but US opposition to the court remains in the form of US statements that the ICC should not have jurisdiction over countries that are not a party to the Rome Statute.)

In 2021, however, a panel of judges bucked Western pressure, ruling that the court does, in fact, have jurisdiction over Palestine. The judges noted that the state of Palestine followed the correct procedure to become a member of the Rome Statute, and “shall thus . . . be treated as any other State Party would.” Subsequently, in March 2021, the ICC prosecutor announced the opening of an inquiry into war crimes committed in Palestine, including crimes committed by Palestinian armed groups. But over one year later, no arrest warrants for Israeli officials have been issued, and the status of the investigation remains unclear.

Parker of DCI-P contrasted the slow pace of the investigation into Israeli war crimes with the prosecutor’s handling of Russia’s invasion of Ukraine: The ICC opened an investigation four days after the Russian invasion, and in May announced the deployment of a forensic and prosecutorial team in the country. “He got boots on the ground in Ukraine as fast as possible. But it’s been a real slog for him to even mention Palestine since he came into the position,” Parker said. For some human rights advocates, the moves on Ukraine, in addition to the December 2021 decision to focus the ICC investigation in Afghanistan solely on crimes committed by the Taliban and ISIS, and to “deprioritize” crimes committed by Western states, have added to the perception of the ICC as a neo-colonial tool. All of the officials who have been put on trial by the ICC are African; the court’s targeting of officials from a breakaway region in Georgia in June of last year marked its first-ever arrest warrants for non-Africans. “Everybody’s very aware that the ICC has never prosecuted a non-African. Palestine will likely be the test case to see whether international criminal law applies to Western and quasi-Western countries,” said Schaeffer Omer-Man.

Even as the ICC probe remains in the investigation phase, Palestinian human rights groups say that Israel is retaliating against groups who have provided evidence. Three of the six Palestinian human rights groups that Israel outlawed as “terrorist organizations” in October 2021 and raided in August 2022 have submitted evidence to the ICC prosecutor: Addameer, Al Haq, and DCI-P. Elayyan of Al Haq said the perception of Israel as a democracy would be damaged if the ICC issues arrest warrants against Israeli officials, and that he suspects that fear motivated Israel’s targeting of his organization. “If Israel’s officials are accused of committing international crimes, then the idea that it is an ‘oasis of democracy’ is a big lie,” he said.

Israeli human rights groups, meanwhile, have not faced similar punishment for their work in support of the ICC—but some advocates are worried that will change with the ascent of the new far-right governing coalition that entered power this week. “For the time being we aren’t facing any consequences for cooperating with the investigation,” said Roy Yellin, director of public outreach for B’Tselem. “We expect that to change drastically and quickly.”

Newsletter
Biden’s Education Department Delays Defining Campus Antisemitism
To the relief of Palestinian-rights advocates, the department’s Office for Civil Rights did not adopt the controversial IHRA definition of antisemitism this past December.
Alex Kane
Report
Palestine Is a Proxy Fight in a Fractious DSA
With a sizable gap between the left’s demand for Palestinian liberation and the pro-Israel tack of national politics, Palestine takes center stage in arguments about discipline and electoralism.
Alex Kane
Sign up for our email newsletter, featuring exclusive original content
Want original reporting and analysis on Israel/Palestine?
Sign up for the Tuesday News Bulletin.