Over 1,000 Palestinians could now be expelled from their homes in Masafer Yatta. 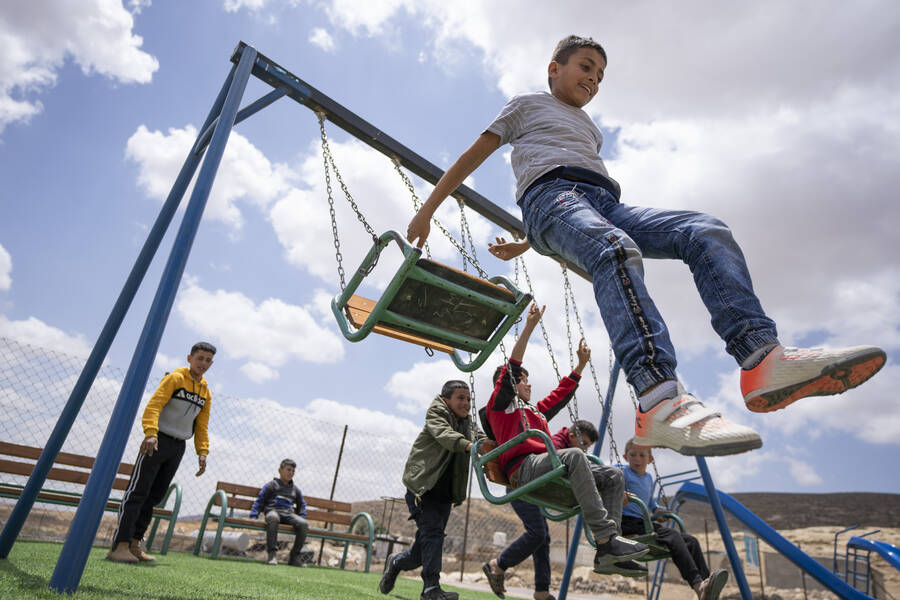 LAST WEEK, Israel’s High Court of Justice issued a ruling that clears the way for the Israel Defense Forces to expel over 1,000 Palestinians from a cluster of eight villages in Masafer Yatta, a region at the southernmost edge of the West Bank. The court rejected the residents’ petitions, after 22 years in which the residents lived in legal limbo. The ruling was published on the court’s website at 11 pm on the eve of Israeli Independence Day, a national holiday.

“It’s a harsh ruling—very harsh,” said Roni Pelli, an Association for Civil Rights in Israel (ACRI) attorney representing 100 families in the case. “They rejected every single petition and claim of the residents.” Neither the ACRI lawyers nor the affected Palestinians expected such an unforgiving ruling. “We thought the Supreme Court would do justice and stand with us,” said Ismail Abu Zahrah, who teaches English in Fakhit, one of the hamlets slated for eviction.

In 1981, the IDF declared an 11.5 square-mile area, home to a total of 12 small Palestinian villages, a “firing zone”—in other words, land expropriated for military training purposes. This kind of declaration is illegal according to international law, as is the expulsion of a civilian population under military occupation. The prohibition against “forcible transfer” is one of the oldest rules of modern warfare, and the court’s decision to uphold the legality of the firing zone directly violates Article 49 of the Fourth Geneva Convention, to which Israel is a signatory, though the Knesset has not ratified the Conventions as part of Israeli domestic law. But Justice David Mintz, a member of the three-judge panel that handed down the ruling (and a resident of the West Bank settlement of Dolev) said that international law functions as a “treaty norm”—that is, it conveys an agreement between states, but is not enforceable in a domestic court. The court also clearly stated that when international law is in conflict with Israeli law, Israeli law prevails. Haggai Elad, the executive director of Israeli human rights group B’Tselem called the ruling a “green light [for the government] … to commit the war crime of forced population transfer.”

When the IDF first declared part of Masafer Yatta a firing zone in 1981, it did so as part of an intentional effort to displace Palestinians and strengthen Israeli settlements in the area. The Akevot Institute, a research center, recently unearthed official meeting minutes in which then-Agricultural Minister, soon-to-be Defense Minister, and eventual Prime Minister Ariel Sharon stated the explicit goal of the declaration was to curb Palestinian population growth.

For years, the IDF has used firing zones as a tool to expropriate Palestinian land in Area C of the West Bank. According to the United Nations, the military has designated 18% of the land in Area C as a firing zone. In 1999, the IDF issued eviction orders in Masafer Yatta, claiming that the residents of the firing zone were not “permanent residents.” The army then loaded 700 residents onto trucks and transferred them out of their villages.

Ali Awad, a young Palestinian journalist, was a toddler that year. During a rainy April, his family was displaced from their home in Tuba. They set up tents on their nearby agricultural land, only to have the military confiscate it, too. “My grandma … told me she remembered the chattering of our teeth,” Awad said. Fortunately, a nearby relative brought the family an additional tent, and 20 members of Awad’s extended family piled in. But there was no room for their livestock, and 30 of his grandfather’s lambs perished, including 12 that were born that very night. “They were frozen dead in the morning,” he said.

Soon after the expulsion, in 2000, the ACRI secured an interim injunction for the residents that allowed Awad’s family and others to return to their homes. The injunction would remain in place until the court reached a final decision, which came last week.

In 2012, the state “updated its stance” toward the firing zone, and told the court that it only planned to expel eight of the 12 villages. Awad’s village was one of the four that were excluded from the state’s plans. Still, he expects that the outstanding demolition orders on “illegal” structures—which make up about half of his village—will likely go into effect at the same time as any mass expulsion.

When Awad heard about the Supreme Court’s ruling, he and his family were devastated. “After a 22-year postponement, [we thought] this one would also be delayed,” he said. This ruling, he added, will hurt the entire community. “Their life … their shelters, their livelihoods, fields, their own land, their own future. It affects all of that.”

Maya Rosen, an activist with the #SaveMasaferYatta campaign, noted that the language and tone of the decision illustrated how disconnected the justices are from the experience of the Palestinians whose homes are under threat. For example, the decision states three times that the residents did “not work with clean hands,” a Biblical euphemism for perfidy. Yet, “the idea that the residents are trying to take advantage of the legal system when they’ve sat through dozens of hours of hearings and can’t understand a single word [because the hearings are all conducted in Hebrew] sounds like the opposite of reality to me,” she said.

The impression that the residents failed to “work with clean hands” arose in part because they refused to accept a deal that the court offered. This so-called “compromise” would have allowed them to reside in their villages on weekends, Jewish holidays, and for two non-consecutive months every year. But for people whose livelihoods depend on uninterrupted access to land, partial forced transfer amounts to total forced transfer.

“The judges…have painted this as an unreasonable form of obstinance, as opposed to very basic facts about what is needed for them to stay in their homes and support themselves,” said Rosen. In fact, she added, the very idea of compromise is a way for the state to whitewash its decision to expel Palestinian families. “If, God forbid, they carry out the demolitions, the state can say ‘we offered alternatives, we offered compromise, and it’s the Palestinians who didn’t take it.’ It will become their hasbara talking point; it’s spin … that we can see in the making.”

Pelli, the ACRI lawyer, said that the last legal avenue is to request an additional hearing with an expanded panel of judges. But the costs of such a hearing will be high.

The ruling raises an old question among Israel’s human rights legal community: If the High Court routinely denies Palestinians due process, does petitioning it only serve to legitimize bad court rulings?

Mickey Gitzin, Israel director of the New Israel Fund, a progressive grant-making organization, said that the court has outlived its reputation as a bulwark against the expansionist tendencies of the state, and that the decision is a part of a growing trend in which the court consistently violates the rights of Palestinians. “I think this will influence the strategy for how human rights organizations handle Palestinian issues when it comes to the High Court,” he said.

If you would like to contribute to paying for the additional hearing, as well as the heavy legal fines imposed on the residents, you can do so here.