The New York Solidarity Network is the latest example of a national trend: members of both parties joining together to squash progressive scrutiny of Israel. 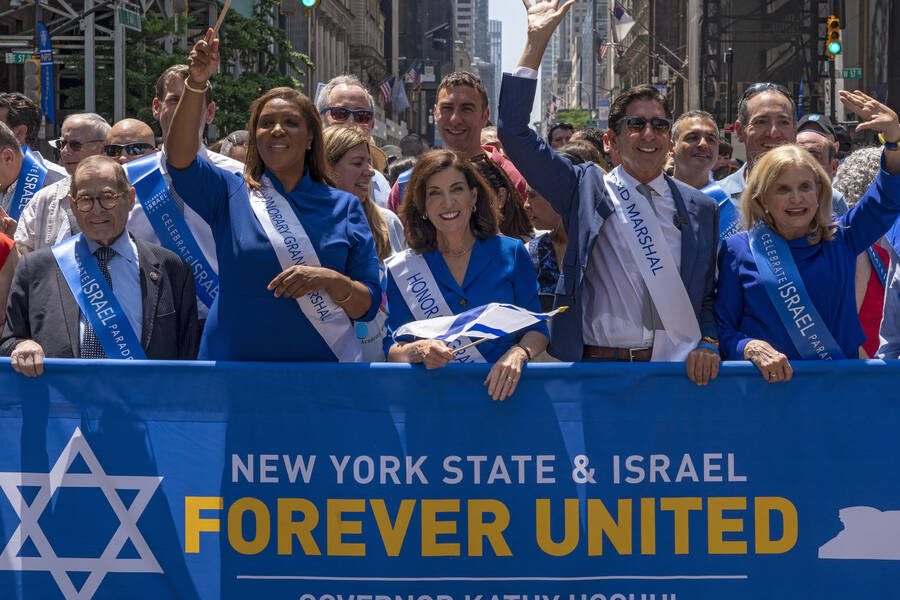 IN MAY, The New York Times revealed that a new Israel-advocacy group, the New York Solidarity Network (NYSN), was intervening in Democratic primaries in New York State to prevent left-wing candidates from winning. Its focus, according to NYSN Senior Adviser Tyler Deaton, was on recruiting “pro-Israel candidates” and combating the rise of the Democratic Socialists of America (DSA), which has endorsed the Boycott, Divestment, and Sanctions (BDS) movement. The Times noted that Deaton is a Republican political strategist; Daniel Loeb, a hedge fund manager who was reported to be a NYSN backer, also has ties to the GOP.

Now, a closer look at the organization has revealed that another NYSN staffer worked for multiple Republican members of Congress. “It’s a predominantly Democratic group. There are Republicans in there,” said Stu Loeser, a spokesman for NYSN. “We focus on Democratic races” because that’s where “the action is” in New York politics. Loeser claimed that the Democratic Party was becoming hospitable to candidates who are “willing to buck the mainstream Jewish community” on Israel, arguing that such politicians receive “an extraordinary amount of support”—though the Democratic Party leadership remains dominated by supporters of Israel, both nationally and in New York. By contrast, Loeser said, NYSN is “here to incentivize a left-of-center, but not as far-left, view.”

In reality, the group purportedly incentivizing “left-of-center” views is a coalition of Republicans and centrist Democrats. Deaton is a Republican strategist most known for pushing the GOP to become a more welcoming party for LGBTQ people. Amanda Cernik, who handles logistics for NYSN, has done political consulting for New York state Reps. John Katko, Tom Reed, Chris Jacobs, and Andrew Garbarino, all of whom are Republicans. A draft website of NYSN personnel included two other figures with GOP ties—Kate Possehl and Tiffany Howard, both of whom work with Deaton at the Washington public affairs firm Allegiance Strategies—but Loeser said they were listed incorrectly and have not done any work for the group. (“A website developer started to map out a personnel page for Tyler and used names of people who work for him as placeholders,” Loeser said in response to questions about why Possehl and Howard were listed as part of NYSN’s leadership.) However, Howard has a NYSN email address; Loeser said that Howard, as Deaton’s staff lawyer, would take over Deaton’s NYSN work “in the case of an emergency.”

NYSN’s GOP ties are the latest example of a national trend that has upended Democratic Party primaries around the country: Republicans working with Democrats to squash criticism of Israel emanating from the progressive wing of the Democratic Party. Even at a time of increasing partisan polarization between Democratic and Republican voters, support for Israel remains a thoroughly bipartisan cause among party elites and donors.

The most prominent example of the trend is AIPAC’s Super PAC, the United Democracy Project. Its third- and fourth-largest donors are Republicans Paul Singer and Bernard Marcus, each of whom gave the Super PAC $1 million. But the United Democracy Project has only spent in Democratic primaries, targeting left-wing and progressive candidates who stray from AIPAC’s hawkish line on Israel, and backing their more conservative challengers. AIPAC’s TV ads “imply to voters that these [AIPAC-backed] candidates are going to be good Democrats,” said Logan Bayroff, a spokesperson for J Street, a progressive organization that supports a two-state solution and that has backed candidates on the receiving end of AIPAC’s attacks. “But the money buying these ads is from people who don’t care about Democrats at all, and are instead motivated by wanting candidates to toe a right-wing foreign policy line on Israel.”

In Missouri, a Republican operative is working with a political action committee trying to dislodge leftist Rep. Cori Bush. In Michigan, Loeb, a billionaire who has donated millions to the GOP, is also funding a group trying to take out Rep. Rashida Tlaib, who has been critical of Israel’s human rights abuses, in favor of a centrist Democrat who told Jewish Insider she believes it’s important to support Israel, “the one ally that we have in the Middle East.”

NYSN members are not spending as much money as AIPAC has—AIPAC’s Super PAC has spent $26 million this election cycle—though it’s unclear exactly how much money NYSN members are donating to their preferred candidates because NYSN is not a political action committee, and thus isn’t required to disclose information about its giving. Unlike the Israel-focused political action committees, or PACs, that are spending millions in primaries around the country by collecting donations and spending en masse on behalf of candidates, NYSN requires new supporters to pledge to individually donate at least $1,000 to the group itself and $5,000 to candidates, causes, or projects aligned with its agenda of support for Israel. Jewish Currents has found that figures who either work for NYSN, have hosted fundraisers for them, or have been identified as NYSN backers in the press have donated about $45,000 to state senate and assembly candidates nationwide this election cycle. Loeb, who The New York Times reported was backing NYSN in addition to his involvement in the Michigan race, has donated about $26,000 to New York candidates since the network’s launch, the most of any donor tied to the network. In this year’s New York primaries, his money has benefited Inez Dickens, an assemblywoman who, in a June primary, defeated Delsenia Glover, a housing activist supported by the Working Families Party (WFP) and The Jewish Vote, two progressive groups; Eddie Gibbs, an assemblyman who won against the WFP-backed Wilfredo Lopez; Denny Salas, who ran against a DSA-backed candidate for the 65th Assembly District but who lost to a third candidate; and Miguelina Camilo, who is challenging the WFP and Jewish Vote-endorsed Gustavo Rivera, a state senator.

These races are for local seats that have little bearing on US foreign policy, and Israel is not a prominent issue any of these candidates have fought over. But NYSN is concerned that an “increasing number of anti-Israel candidates have won seats in local New York elections,” according to an email obtained by Jewish Currents. While it’s unclear exactly who counts as an “anti-Israel candidate,” NYSN’s definition seems to encompass anyone who has the backing of a left-wing organization that is critical of Israel. Such groups have grown in strength and number in recent years: They include the New York City chapter of DSA, which has endorsed the BDS movement, and The Jewish Vote, the electoral project of Jews for Racial and Economic Justice (JFREJ) whose “endorsement principles” state that candidates they endorse should commit to work to end Israel’s occupation of the Palestinian territories.

In 2018, DSA helped Alexandria Ocasio-Cortez defeat staunch Israel ally Joe Crowley, at the time the fourth-most powerful Democrat in the House, and supported DSA member Julia Salazar, an Israel critic, in her successful bid for the State Senate. The same year, The Jewish Vote, in coalition with other progressive organizations, helped dislodge the Independent Democratic Conference, a group of Democrats that worked with Republicans to control the state legislative agenda in Albany. In 2020, NYC-DSA helped elect four members to the New York State Senate and Assembly.

Zohran Mamdani, who represents the Queens neighborhood of Astoria in the Assembly and is a member of DSA, said Israel advocates are concerned about the proliferation of city- and state-level pro-Palestinian electeds for symbolic reasons, and because even such local officials command attention. “They’re terrified that we have these platforms where we can talk to our constituents about the reality in Palestine. They don’t want any threat to the ways Israel has been spoken about in the past,” said Mamdani. “It’s hard to sustain the myth that you can’t be a pro-Palestinian elected official when you have candidates questioning US support for Israel.”

This year, however, the left has had much less success. Nationally, AIPAC’s onslaught of spending has so far helped six centrist Congressional Democrats defeat their more progressive primary opponents. In New York’s June primaries for the state Assembly, the DSA lost all but one of the five races in which it had endorsed candidates running against incumbents or in open seats, though the organization did successfully defend four socialist incumbent Assembly members. Later this month, DSA and other progressive groups will test their power again, as they back candidates running in August’s primaries for state senate against centrist Democrats, some of whom have the support of NYSN backers.

“There’s an electoral left that is surging. It’s taken the establishment a few years to catch up,” said Sophie Ellman-Golan, director of strategic communications for JFREJ. “Now they’re going to get more strategic about how to fight back against us.”

Correction: This story originally reported that Tiffany Howard and Kate Possehl worked for NYSN. Although both were listed on a web page of NYSN personnel, upon publication, NYSN's spokesman said the website was inaccurate and not intended for the public; Howard and Possehl work for NYSN consultant Tyler Deaton, but have not personally done work for the organization. In addition, this story incorrectly paraphrased Loeser by quoting him as saying, "We focus on Democratic races because that’s where action is needed" on Israel. In fact, Loeser meant NYSN focuses on Democratic races because that's where action is needed in New York politics.