The Power and Limits of Israeli Dissident Cinema

The Other Israel Film Festival highlights state violence past and present, but can films funded by the government ever truly hold it to account? 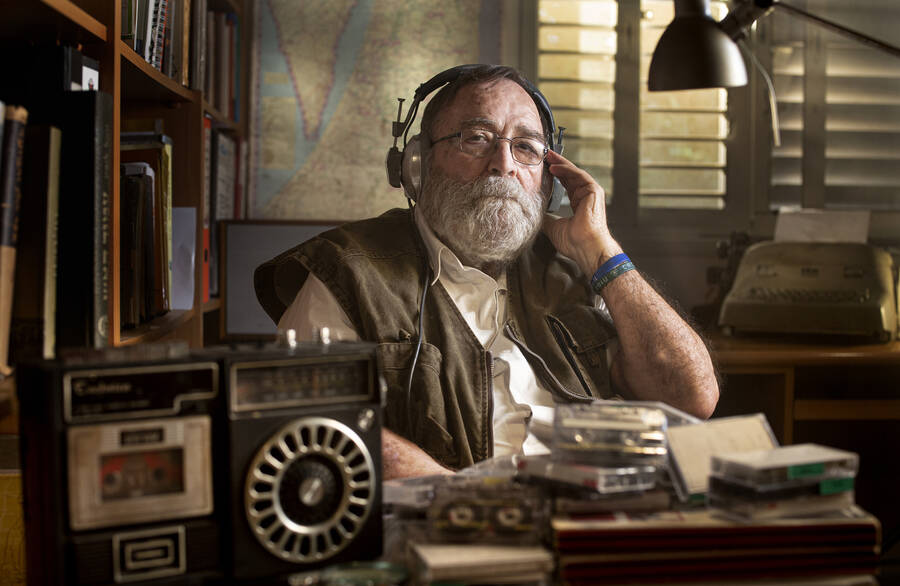 Teddy Katz, whose controversial 1998 master’s thesis argued that residents of the Palestinian village of Tantura were massacred and buried in a mass grave in 1948. Still from Schwarz’s Tantura.

For 16 years, the Other Israel Film Festival, organized by the Marlene Meyerson Jewish Community Center in Manhattan, has provided a venue for films that take a critical stance toward Israeli history and policies. This year, the festival—which starts November 3rd, with in-person screenings scheduled through November 10th and streaming options available until November 13th—features a number of notable films, including Israel’s Oscar submission for best foreign film, Cinema Sabaya, a drama about a filmmaking class made up of Jewish and Palestinian women. But it’s the documentaries on view that stand out; Alon Schwarz’s Tantura, and Idit Avrahami and Noam Sheizaf’s H2: The Occupation Lab, particularly exemplify the mission and strength of the festival.

Tantura, which also opens at Manhattan’s IFC Center on December 2nd, is an exploration of Israel’s 1948 War of Independence—or, as the Palestinians call it, the Nakba, Arabic for “the catastrophe.” Named after a seaside Palestinian village conquered by Jewish forces during the war, the film centers on interviews with elderly former members of the Alexandroni Brigade—which seized Tantura and expelled its residents—as well as erstwhile Israeli grad student Teddy Katz, whose 1998 master’s thesis argued that Tantura residents were massacred and buried in a mass grave. Through these conversations and others with survivors and scholars, in addition to extensive archival footage, the film affirms the horrifying portrait drawn by Katz and subsequent researchers.

The ex-soldiers are asked not only about the events themselves but also about tapes of conversations with Katz from decades ago, when many of them recounted these acts of violence. Despite these apparent confessions and further eyewitness accounts, most of the veterans featured in Tantura now deny—unconvincingly—that the massacre took place at all. The film is thus about not just ethnic cleansing, but the repression of its memory, which is vital to the founding myth of Israel. It also functions as an indictment of the racism woven into Israeli society since its inception. Even those who deny the massacre itself admit to seeing and participating in extensive violence in 1948, and discuss it with disturbing casualness, dismissing it all as simply in the nature of war. The ex-soldiers’ palpable hatred of Palestinians finds a softer but no less scornful complement in the words of an elderly Israeli woman living on a kibbutz near where Tantura once stood, who explains her opposition to a monument memorializing the conquered village: “If they [Palestinians] want it, I’m against it.”

While Tantura focuses on historical atrocity and a present-day battle over its recognition, H2: The Occupation Lab considers the ongoing, daily brutality of the occupation. Avrahami and Sheizaf meticulously examine the ways the occupation has played out in Hebron, the West Bank city that is said to contain the tomb of Abraham, a site holy to Muslims and Jews. H2 is the military’s designation for the Jewish section of the city, where 800 mainly religious settlers live protected by fences, concrete barriers, and a formidable military presence; H1, the Palestinian part of the city, is home to several hundred thousand residents. The documentary was made with the cooperation of Breaking the Silence, an organization of Israeli ex-soldiers who insist on telling the story of the occupation as they implemented it, and the filmmakers elicit soldiers’ frank admissions about the unquestionably inhumane methods employed against Hebron’s Palestinian inhabitants in the name of settler security. The film describes and depicts forms of harassment both petty and major, from settlers hurling curses at residents to soldiers detaining people for refusing to follow orders, supplementing interviews with footage of the everyday indignities of the occupation, the kind familiar from innumerable other films on the subject. As the title indicates, Hebron was and is a laboratory for the methods used throughout the West Bank, and H2 makes the cruelty of those methods painfully clear.

These documentaries, like most of the movies set to be screened at the Other Israel Film Festival, are scathing in their indictment of the Jewish state. But many if not most of the featured films were also directly supported by the Israeli government, through funding from the Ministry of Culture and Sport. For this reason, they fall afoul of cultural boycott guidelines developed by the Boycott, Divestment, and Sanctions movement and have therefore been kept out of some leftist film festivals. Given the right-wing nature of the Israeli government and its resistance to any criticism of its policies, I wondered: How can it be that films like Tantura or H2 are financed by the very state responsible for the crimes they examine? When I asked a young Israeli filmmaker, he explained that despite former culture minister Miri Regev’s efforts to silence critical voices, the New Fund for Cinema and Television—the commission that decides which films will receive state funding—has largely managed to maintain its independence; meanwhile, the government has tried to finance more right-wing films through funds, established during Regev’s tenure, that encourage filmmaking in regions far from more liberal Tel Aviv. The Shomrom Film Fund, which distributes grants to settlers in the occupied West Bank, held its inaugural festival there in September. The event was met with widespread condemnation: 250 filmmakers—including Schwarz, Avrahami, Sheizaf, and some of the country’s most important directors, like Amos Gitai and Nadav Lapid—signed a searing petition against it.

Nevertheless, given the expense involved in making a film and the paucity of funding sources, even the most radical leftist filmmakers accept state funding. For them, the cause of exposing Israel’s crimes trumps concerns about complicity, such as the requirement to feature the symbol of a government ministry in their films’ credits. The problem is quite different for Palestinians with Israeli citizenship, who cannot blithely accept this funding, as doing so opens them to the charge of collaboration—and requires denial of their own identity, since the state stipulates that any filmmaker whose work they finance must describe their film as “Israeli,” not “Palestinian.”

It is tempting to admire Israel’s funding of films like Tantura and H2. But one’s admiration can only go so far—after all, rather than helping make films about human rights abuses, the state would do better not to commit them in the first place. As for those taking the Israeli government’s money, the question is whether cinema, in highlighting such horrors, has any power to prevent them. In a recent piece in +972 Magazine, Seth Anziska, author of the brilliant book Preventing Palestine, considers Tantura alongside Schoolyard, a documentary about Israeli war crimes in Lebanon, arguing that increased visibility of the state’s brutality has done nothing to hold historical perpetrators accountable, let alone halt present-day violence. “Do such films truly matter in the absence of justice, amid ongoing impunity?” Anziska asks. Bearing witness is valuable in itself, and filmmakers like Schwarz, Avrahami, and Sheizaf at the very least redeem something of the human spirit in their benighted land. But Anziska is right that the steady accretion of more of the same stories has taken us nowhere. This, then, is the dilemma facing Israeli filmmakers: Living in the midst of society committing crimes daily, what do you do when no one listens—or if they do listen, do nothing about it?

A previous version of this piece misstated the location of the IFC Center.

Review
World With No Escape
In his final novel, Last Times, Victor Serge achieved the ethical vision that sometimes eluded him in life.
Mitchell Abidor
Review
The Overlooked Loyalties of Ethel Rosenberg
A new biography of the martyr captures the texture of her life and times but fails to fully investigate her political convictions.
Mitchell Abidor
Sign up for our email newsletter, featuring exclusive original content
Want original reporting and analysis on Israel/Palestine?
Sign up for the Tuesday News Bulletin.