The Left is Demanding “Abolish ICE.” But Jewish Groups Are Less Sure.

Left-leaning pillars of the American Jewish community are split on the newest progressive rallying cry. 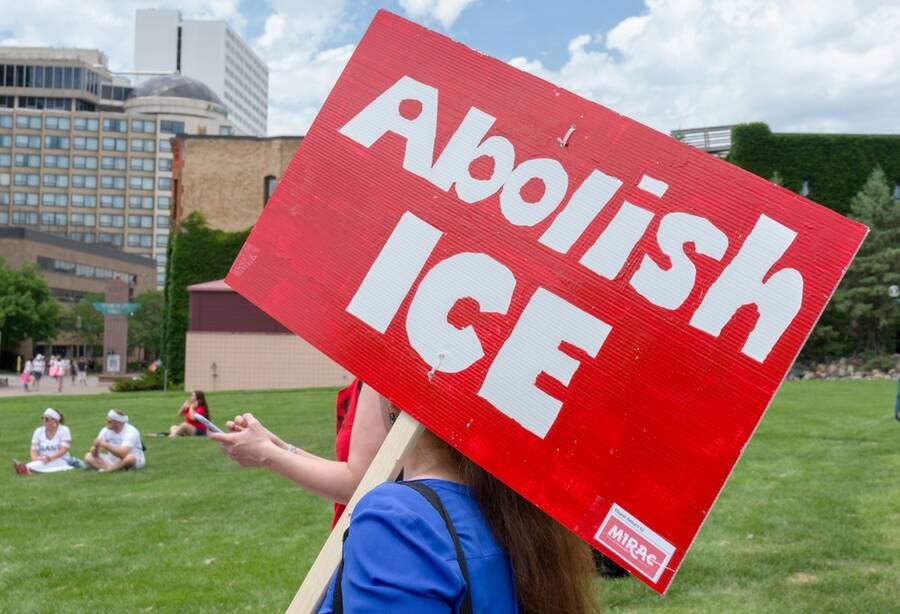 They came to protest the Trump administration’s war on immigrants, and to do so as Jews. The protest, organized by T’ruah, the rabbinic social justice group, was co-sponsored by a range of American Jewish organizations, ranging from the refugee agency HIAS to the Palestine solidarity group Jewish Voice for Peace. Throughout the evening, speakers expressed outrage at the Trump administration’s policy of separating immigrant children from their parents at the US-Mexico border.

“When children and families are put in cages and in camps, our history requires—requires—that we show up and and say, ‘when we said never again, we meant never again,’” Brad Lander, a progressive New York City Councilman from Brooklyn, told the crowd at the protest.

But while the groups that came out for the June 21st action are united against Trump’s anti-immigrant policies, they are divided on a demand that is quickly becoming a progressive litmus test: the abolition of ICE, the federal agency created in the wake of 9/11 that is now wreaking havoc on immigrant lives, raiding workplaces and communities to find undocumented people, detaining them and putting them in the pipeline for deportation.

Jewish Currents reached out to eight American Jewish groups who are critics of Trump’s immigration policy to ask them their position on the abolition of ICE. Four of the groups we reached out to—HIAS, Jews for Racial and Economic Justice (JFREJ), T’ruah and Bend the Arc—sponsored the June 21st rally. Jewish Currents also requested comment from the Anti-Defamation League, the American Jewish Committee, the National Council on Jewish Women and the Religious Action Center. Of the eight groups surveyed, four did not take a stand on abolishing ICE, two endorsed the idea, and the remaining two did not respond to requests for comment.

From the left, a HIAS spokesperson told Jewish Currents that the group “does not have a position on this,” while the Reform Movement’s Religious Action Center, the National Council of Jewish Women and T’ruah criticized ICE but stopped short of calling for its demise.

“Our focus remains on reuniting immigrant children who have been separated from their parents and ensuring a just, secure, and compassionate immigration system,” said Barbara Weinstein, Associate Director of the Religious Action Center. “We are deeply troubled by heavy-handed enforcement actions that undermine trust in law enforcement agencies and force immigrants into the shadows.”

But JFREJ and Bend the Arc, two organizations with a bold activist bent, have both endorsed abolishing ICE. They are the only two left-of-center Jewish groups we spoke with who support the idea.

“ICE is implementing Trump’s most authoritarian impulses, and their actions are putting us in a state of moral emergency. Obstructing their operations is not only just—it is morally necessary,” said Bend the Arc head Stosh Cotler. “Their campaign of terrorizing, separating, detaining, and deporting vulnerable migrants must be stopped. Conscientious ICE agents should resist immoral orders or quit, while all Americans should pressure Trump and Congress to end the policies causing so much pain.”

The position on abolishing ICE of some groups closer to the political center of the Jewish community, however, is still unknown. The Anti-Defamation League and the American Jewish Committee, two pillars of the Jewish establishment who have criticized Trump’s immigration policies, did not respond to requests for comment.

The advocates calling for ICE’s abolition say that the agency has become a rogue force carrying out the inhumane demands of President Trump. ICE raids have swept up thousands of undocumented immigrants, separating parents from children, and sending people back to countries where they face death at the hands of gangs and police forces. ICE agents have been accused of verbally abusing detained immigrants with racial slurs, and physical and sexual assault. Dozens of immigrants have died while in ICE detention centers because of inadequate medical care or because agents ignored immigrants’ complaints about their health.

In recent weeks, as outrage grew over the separation of immigrant children from their parents, the demand for ICE’s abolition rocketed from Twitter to the halls of power.

Democratic socialists like Alexandria Ocasio-Cortez, the shock winner of a New York Democratic Congressional primary, campaigned on the abolition of ICE. Since her victory, 2020 contenders like Senator Kirsten Gillibrand and Senator Elizabeth Warren, in a nod to the party’s revved-up progressive base, have joined the call.

Other Democrats, though, are less enthused by the idea. Minnesota Senator Amy Klobuchar said, “we are always going to need immigration enforcement.” Connecticut Senator Richard Blumenthal said that “abolishing ICE will accomplish nothing unless we change the Trump policies.” This divide among Democrats is mirrored in the Jewish community, which voted for Democratic candidate Hillary Clinton over Trump in the 2016 election by a 71-24 margin.

For Jody Rabhan, the director of Washington operations for the National Council of Jewish Women, a call to abolish ICE is a bridge too far. Rabhan told Jewish Currents that her group wants to cut funding to ICE—but stopped short of calling for its abolition.

“We’re supporting less funding. But ICE does a lot of other important work, particularly in the realm of human trafficking,” Rabhan said. (Advocates of abolishing ICE say that functions like combating human trafficking could be moved to another agency not bent on criminalizing immigrants.)

T’ruah Executive Director Rabbi Jill Jacobs, meanwhile, whose group endorsed a hundreds-strong rally in San Diego earlier this month that called for the abolition of ICE, framed her group’s hesitation as a “tactical question.”

But as ICE continues to wage war on immigrant lives, calls for its abolition are bound to only get louder.

“Family separation is of course abhorrent and absolutely something we must end. But we think the way to end that is to push for uprooting some of these systems that are in place, like ICE and Operation Streamline, which allows for the mass criminalization of immigrants,” said Audrey Sasson, the executive director of JFREJ. “[Abolishing ICE is] a reasonable demand because there was life before ICE. ICE is a post-9/11 project and we can live without it.”