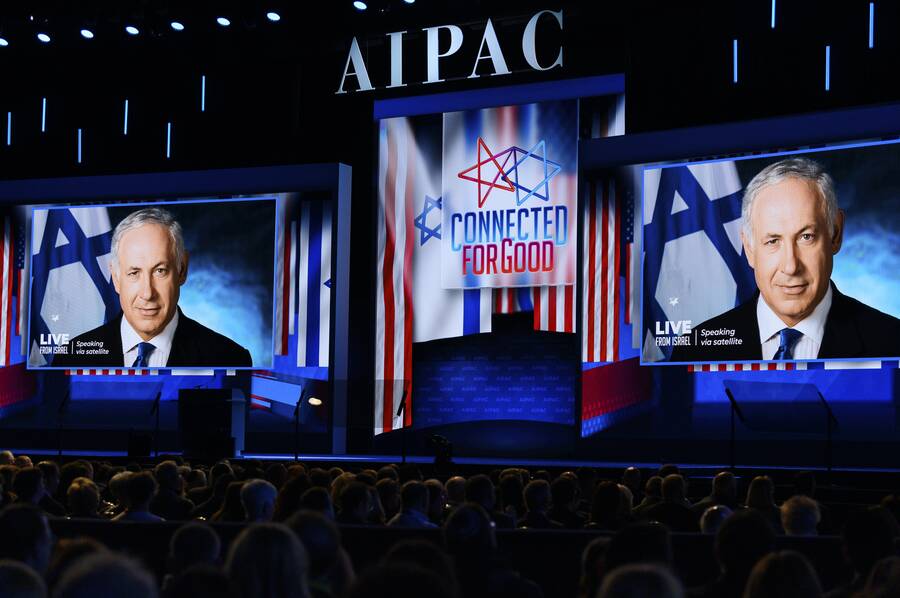 Last Thursday, the American Israel Public Affairs Committee (AIPAC), Washington’s flagship Israel lobby group, announced that it would be forming two new political action committees (PACs) to spend money directly on elections. One will be a traditional PAC, meaning it can spend no more than $5,000 on a candidate per election. The other will be a Super PAC, an entity that can spend unlimited sums of money for or against a candidate, but is prohibited from coordinating with candidates themselves (though that rule has a large loophole). AIPAC spokesman Marshall Wittmann explained the move as a way “to significantly deepen and strengthen the involvement of the pro-Israel community in politics.” (AIPAC’s decision prompted the liberal Jewish group J Street to ask that “AIPAC and all pro-Israel PACs” pledge not to raise money for candidates “who have threatened the integrity of American democracy by supporting efforts to delegitimize and overturn the results of the 2020 election.” AIPAC hasn’t responded publicly to that request.)

The move suggests that AIPAC is about to spend a whole lot of money on shoring up the Washington consensus on Israel. The decision comes at a time when the progressive wing of the Democratic Party is growing more critical of the country’s apartheid system, putting AIPAC’s model of cultivating bipartisan support for Israel under some strain. The establishment of these PACs plunges AIPAC directly into electoral politics, joining an alphabet soup list of groups—including DMFI PAC, NORPAC, and Pro-Israel America PAC—that already spend millions of dollars every election cycle to protect pro-Israel incumbents and defeat progressive insurgents who are critical of Israel’s military occupation.

But hasn’t AIPAC always spent money on elections? Yes and no. When Congresswoman Ilhan Omar’s critical comments about AIPAC sparked controversy in 2019, Wittmann told The New York Times that his organization “does not rate, endorse or contribute to candidates.” This is true, but it omits something crucial: AIPAC urges individual supporters to give generously to political candidates—through regional PACs like the To Protect Our Heritage PAC in Chicago and the Florida Congressional Committee—to reinforce those candidates’ support for the US–Israel relationship.

AIPAC “always professed” that there was a “wall” between “lobbying on policy and political contributions,” said Ada Horwich, who spent 15 years on AIPAC’s board before leaving because she thought the organization was shifting to the right. “They assigned each of the board members one or two senators during a cycle to be their contact or point person. So, we developed a relationship with them. We lobbied them every month. We knew their chiefs of staff.”

At the same time, Horwich said, “as a lay person and citizen, I was also expected to fundraise for that person.” That fundraising prowess has built up AIPAC’s reputation on Capitol Hill as a lobby not to be crossed; it likely influenced Donald Trump’s recently-publicized comments that Israel used to have “absolute power over Congress.”

By forming official PACs, AIPAC is turning to a more explicit fundraising strategy that gives them more direct control over which candidates to back, and how to support them.

Mitchell Plitnick, a US foreign policy analyst and the co-author of the book Except for Palestine: The Limits of Progressive Politics, told Jewish Currents that one reason for the creation of the PACs is to “make sure there’s not another Eliot Engel,” the former AIPAC darling who lost his seat in 2020 to Jamaal Bowman, a critic of Israel’s human rights abuses. Plitnick added that the formation of the Super PAC is more significant than the creation of the traditional PAC. “What the Super PAC can do is launch a media blitz that can both promote candidates and polish up Israel’s image,” he said. “AIPAC is recognizing how bad Israel’s name is these days, the increasing recognition of Israel as an apartheid state, and one that is not interested in resolving the issue of Palestinian rights. The Super PAC is there to change that.”

In announcing their new tactic, AIPAC took care to emphasize that they would be supporting both Democrats and Republicans. That’s in keeping with the lobby’s longstanding philosophy that a bipartisan approach is key so that no matter who holds power in Washington, US military aid to Israel will keep flowing. But the group’s influence over Democrats has weakened, in large part due to AIPAC’s decision to try to tank former President Obama’s Iran deal, his signature foreign policy achievement. “When you encourage a prime minister of Israel to come and speak against an administration, that’s not being bipartisan,” said Tom Dine, who ran AIPAC for 13 years, referring to Israeli leader Benjamin Netanyahu’s 2015 speech to Congress against the deal.

Dine says that AIPAC’s move to form new PACs is an opportunity to restore the image of the lobby as a bipartisan actor, explaining it as a shift that will “strengthen AIPAC,” as long as the PACs do in fact contribute to candidates from both parties.

Report
What the Fossil Fuel Industry Learned from Anti-BDS Laws
Attacks on Israel’s critics have become the template for efforts to suppress climate activism, gun control advocacy, and other progressive movements.
Alex Kane
Newsletter
How the War in Ukraine Is Changing Israel’s Refugee Policies
Rules are changing in a hurry for non-Jewish Ukrainian refugees, but refugees from other regions haven’t yet benefited.
Alex Kane
Sign up for our email newsletter, featuring exclusive original content