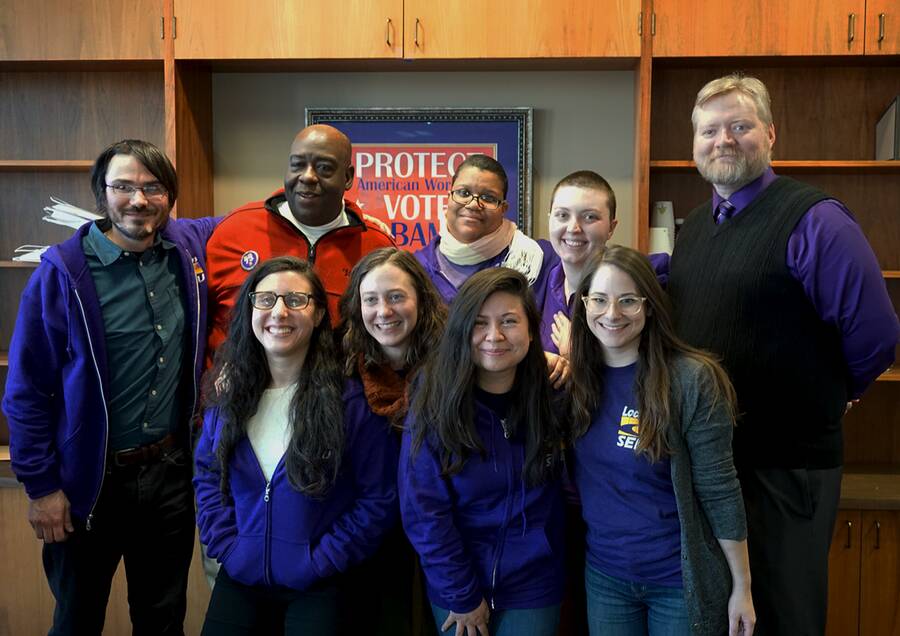 OVER THE PAST FIVE YEARS, Marc Robinson has had one place he’s wanted to be on Friday nights: at home with his teenage daughter. Instead, he spends that time working, because his full-time job as a driver for seniors at CJE SeniorLife, a senior care program run by Chicago’s Jewish United Fund (JUF), doesn’t pay enough for him to make ends meet for his family. He works an additional 20 hours a week as a dispatcher at an outreach organization for the homeless. He likes both jobs, but says he “would’ve preferred to be home with [his daughter], to be watching a movie—even when she had an attitude.”

Robinson is a member of the Service Employees International Union (SEIU) Local 73 bargaining team that has been at the table with the JUF (which is Chicago’s Jewish Federation) over the past few months, demanding better pay and working conditions for 960 union workers across the JUF’s vast network of social service agencies and Jewish organizations, including Jewish Child and Family Services (JCFS), Jewish Community Centers (JCC), CJE SeniorLife and the JUF itself. The union covers workers ranging from therapists at JCFS to preschool teachers at the JCC to nurses and dining service workers at CJE SeniorLife.

On Wednesday, after an unprecedented yearlong organizing effort, the union came to a tentative agreement with the Federation for a new contract. Among other wins, the contract will include an across-the-board 9% pay increase over three years, more bereavement leave, better health insurance options, and three to four weeks of paid parental leave depending on the program (previously, there was no paid parental leave across the JUF’s agencies, except for at the JUF itself).

Previously, organizers say, working conditions had been unsustainable for many employees, who often work multiple jobs to make ends meet and would come to work sick because of a lack of paid sick time. Because of the low salaries—before the new contract, many of them were below Chicago’s minimum wage—and a lack of benefits, turnover is high, which also affects clients, students, and seniors who form relationships with clinicians and teachers.

“JCFS has an incredible and warranted reputation for the quality of training they give their clinicians and the services they provide,” says Leora Mincer, a bargaining unit member and a JCFS employment specialist helping youth with disabilities find jobs. “They’re one of the best agencies. That’s something that we’re afraid is in jeopardy with how staff are being treated.”

In an emailed statement, Linda Haase, JUF’s senior associate vice president of marketing and communications, says she shared this concern for the staff and for the sustainability of their community services: “JUF, our partner agencies, staff and union are working collaboratively toward these shared goals while balancing the very real limits of our budgets.”

While JUF has long been unionized, the union has historically been inactive. That’s partially because of how the union is structured: many employees—generally professional staff—are classified as “bargaining unit eligible,” which means that they benefit from union-negotiated contracts, but aren’t required to become dues-paying union members, which means that they have generally felt little stake in union activities. (Other workers in the union—such as clerical workers, janitors, housekeepers, and Certified Nursing Assistants—are required to pay dues.) Shea Marshall, the director of social services at SEIU Local 73, said that this is because of how the union developed historically, as an amalgamation of other local unions, which were all organized at different times.

When Marshall assumed his current role two and a half years ago, he knew that the JUF’s union had been neglected by previous social services organizers, and he wanted to increase union capacity. “It’s always been a big deal to me because the Federation is one of the larger employers at the local and it covers a substantial number of people who are, in a lot of cases, completely ignorant of their rights under the contract,” he says.

Marshall’s plan received a significant boost in June 2018 when Lili Gecker started a job as a therapist at JCFS’s counseling program for teens. Gecker had an organizing background—she had even previously worked for SEIU—and wanted to join the union as a dues-paying member on her first day, but she found it difficult to find information about doing so. She reached out to her existing contacts at SEIU to learn more, and began working with them to organize. She took on the role of meeting new JCFS employees at their orientations and encouraging them to sign up for the union. One of those employees was Mincer, the employment specialist. At the time, Mincer was considering looking for a second job to better cover her expenses. At Mincer’s first team meeting, with some 20 other people working in employment services, she had been surprised to find that most everyone had, like her, joined within the previous year; one of the most senior employees was her supervisor, who had been at JCFS for four years, and who would soon leave. Given the turnover and low salary, Mincer grew excited about organizing, and became a union steward.

With support from SEIU, Gecker, Mincer, and other JCFS organizers began reaching out to employees of other JUF agencies—a difficult task, given that employees are spread out across some 50 sites in the Chicago metropolitan area. Eventually, SEIU increased the percentage of dues-paying members in the JUF union from 39% to 52%. Gecker says they plan to continue encouraging professional staff who are not required to sign up to do so anyway, because “the burden should not be on some of our lowest-paid employees.” Having more people involved gives the union a stronger negotiating position: “I think we were able to win so much because we did increase our membership so drastically,” she says.

Increased membership may have helped JCFS staffers even before they got to the negotiation table. In the summer, employees received an email that some therapists and employee specialists would be receiving raises to bring them up to market rate, with little transparency about who was getting them and why (Mincer and Gecker received $4,000 and $6,000 raises, respectively). Mincer was excited about the raise but also confused, since she had been told upon hiring that she couldn’t negotiate her salary, since the position was grant-funded and no more money was available.

This fall, ahead of contract negotiations, which happen every three years, union leaders distributed a bargaining survey and received responses from over 300 members about their priorities, many of which included salary increases and more sick leave and paid time off. When negotiations began and organizers presented their financial proposals, JUF management was so caught off guard by the scale of the union’s demands that they called off a day of negotiations in order to analyze numbers and formulate a response.

Marshall says that although he believes the JUF has “good intentions,” the union found some members of the JUF’s bargaining committee to be “less amenable, in some cases, less than cordial.” The JUF argued chiefly that they didn’t have the money to meet the union’s demands. “But when you hear that they’re paying for a high-price law firm to do their negotiations, it’s hard to believe,” Marshall says. In 2019, according to its annual report, the JUF took in over $334 million in revenue; $30.5 million (about 12%) was allocated to “health and human services,” which includes the total program costs for JCFS, CJE SeniorLife, and other agencies. At press time, the JUF had not responded to further questions  about how it allocates its revenue and how much funding is donor-restricted.

Gecker says the union appealed to Jewish values when negotiating with the JUF. “We were able to argue that our bereavement leave could be extended so that people could sit shiva, and they couldn’t argue with it, it made perfect sense,” she says. Over 40 rabbis and Jewish community professionals in the Chicago area signed a solidarity letter in support of the union.

One big disappointment, Gecker says, was that they weren’t able to increase pay for JCC preschool teachers as much as they had hoped. Many of the preschool teachers had joined the union quickly and enthusiastically. Serra Naiman, a full-time JCC teacher who works with two-year-olds, says that preschool teachers had already been talking about how they were struggling to manage their workloads and make ends meet. “When the union option came forward, it was kind of like, ‘Oh my gosh, are we finally going to be able to get the things that we need?’” she tells me. On top of her full-time work, Naiman babysits two to three times a week, and also tries to pick up extra preschool shifts two or three times a week. Given the exhaustion, and the realities of working with small children alongside fellow teachers who don’t have enough sick leave, she gets sick every couple of weeks. She can’t afford a car or the family she eventually wants to have. “To me, this job has an expiration date, but I don’t want it to because I feel like this is what I really love to do,” she says.

Previously, if preschool teachers were sick or had an emergency, they had to call around and find their own substitutes if they wanted to be paid. The union did successfully negotiate a change to the policy, which makes the JCC responsible for finding the substitutes. Gecker hopes the union can continue to find ways to pressure JUF to increase preschool teacher salaries.

Annie Schuber, an operations director at JUF’s EZRA social service center, points out the disconnect between the JUF providing community care and failing to take care of its own community. “JUF is powered by donors, and donors contribute to the Federation because they see the work that the employees are doing on a daily basis, providing child care, or taking care of the elderly, or providing food and connection to benefits for people in need,” says Schuber. “The employees cannot continue doing their work helping the community to the best of our ability unless we’re taken care of, too.”

This article has been updated to better reflect that JUF employees were covered in the union contract, and that the 9% pay raise will be implemented over a three-year period.

If you have tips about labor conditions at Jewish Federations and other Jewish organizations, email editor@jewishcurrents.org.