When Is Violence “Terrorism”?

The use of the term to condemn Palestinian armed struggle raises questions about who gets to define it. 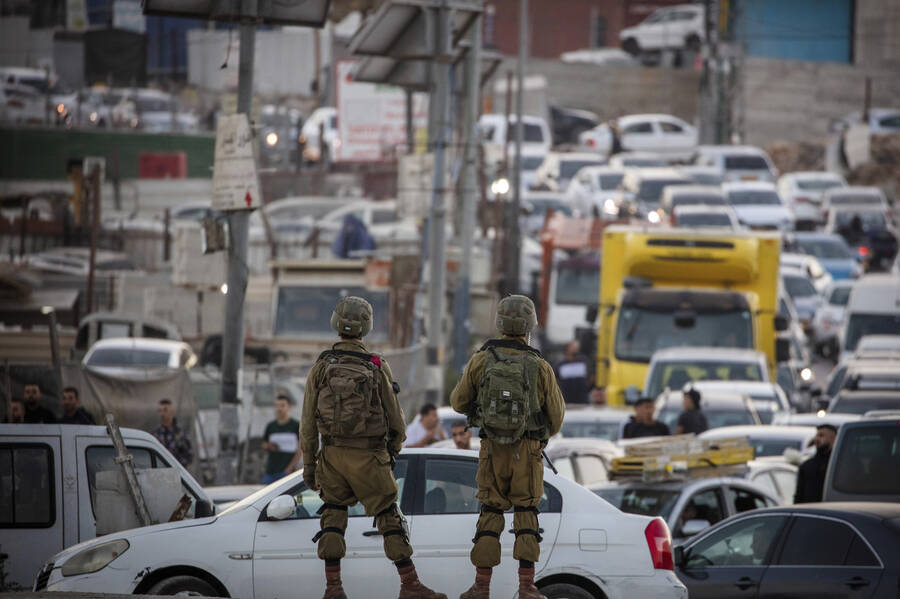 Israeli forces block the entrance to the Shuafat refugee camp after a soldier was killed in an attack on an East Jerusalem checkpoint, October 9th, 2022.

On October 9th, a Palestinian shot and killed Noa Lazar, an Israeli soldier serving at a checkpoint near the Shuafat refugee camp. Three days later, a Palestinian gunman killed Ido Baruch, a soldier who was guarding Israeli settlers as they marched near the Palestinian town of Sebastia in the occupied West Bank.

Israeli Prime Minister Yair Lapid called the Shuafat attack a “severe terrorist attack,” and said the assailant behind Baruch’s shooting was a “despicable terrorist.” The Jerusalem Post, Israel HaYom and i24 News referred to the Shuafat shooting as a “terrorist” act. The centrist Anti-Defamation League as well as the liberal Zionist J Street also referred to the shootings as “terror” attacks.

This broad consensus across the Zionist political spectrum reflects a commonly-held view among many Israelis and Israel advocates that the killings of soldiers engaged in a military occupation are acts of “terror,” in the same category as indiscriminate attacks on civilians. But this view represents only one pole of a discursive struggle between Israelis and Palestinans, and, more broadly, Western countries and formerly-colonized nations, who have clashed in international fora like the United Nations (UN) over whether violence against agents of a military occupation ought to count as “terrorism.”

While different countries have codified their own definitions of terrorism in their national laws, “there is no international legal consensus on the meaning of terrorism,” said Ben Saul, Challis Chair of International Law at the University of Sydney and author of the book Defining Terrorism in International Law. According to Saul, there is general agreement among states that the deliberate killing of civilians to achieve political goals constitutes terrorism; the disagreement lies in “whether insurgent or guerrilla attacks on soldiers in armed conflicts should also be called terrorism.”

The 1972 murder of 11 Israeli athletes during the Olympics prompted a decades-long series of UN General Assembly debates around the definition of the term “terrorism.” During these discussions, sharp divisions emerged between Western countries and formerly-colonized states over what to call the use of force by national liberation groups—political movements representing colonized peoples that have yet to achieve independence.

In 1987, Syrian ambassador to the UN Ahmad Fathi al-Masri proposed a UN conference that would distinguish between “terrorism” and struggles for “national liberation,” a proposal Benjamin Netanyahu, Israel’s UN envoy at the time, said would make a “laughingstock” out of the UN. Syria’s view was that attacks against occupation forces should not be considered terrorism, according to Remi Brulin, a scholar of terrorism whose research focuses on how Israeli and American discourses on “terrorism” developed. Brulin said that “the huge majority of member states at the General Assembly at the time agreed with the necessity” of discussing the difference between terrorism and struggles for national liberation, but “every single Western state and Israel opposed the idea completely,” with Netanyahu accusing Syria of “[conceiving] the idea of this conference in order to change the terms of reference about terrorism.” “In the past they denied that they perpetrated these crimes. Now, having been exposed, they say they are not really crimes,” he said. The US said it opposed the conference because it would pose “unnecessary conceptual problems,” which “could easily divide us and erode the [current] measure of communality now existing” on the issue of terrorism. Syria eventually dropped its push for the conference.

The international debate over terrorism also encompasses the question of whether states themselves can engage in terror, with the same divisions emerging between formerly-colonized countries and their erstwhile colonizers. Western powers “primarily see terrorism as a non-state phenomenon, and oppose the idea of any legal concept of “state terrorism,’” Saul said, whereas formerly-colonized nations argue that Western colonialism and military invasions “are the worst and largest kind of violence in the world, and should be called terrorism.” During an October 2001 General Assembly debate on terrorism, Iraq’s UN envoy said US-imposed sanctions on his country—which decimated the country’s economy—were a form of “state terrorism.” Iran’s UN envoy levied the same charge against Israel following a November 2006 Israeli shelling attack in Gaza that killed 19 Palestinian civilians.

Since 2000, countries at the UN have tried to come to a consensus on what’s called the Comprehensive Terrorism Convention, which would codify the criminalization of terrorism in international law. But consensus has again stalled due to disagreements on how to classify national liberation struggles. The Organization of Islamic Cooperation (OIC), a body of 57 mostly Muslim-majority countries, argues that violence committed by those in a struggle for self-determination—a term referring to a people’s ability to form their own state and govern themselves—should not be covered by the terrorism convention but rather by international humanitarian law, which governs the permissible use of force based in part on the “principle of distinction” between civilians and soldiers. The OIC’s argument is aimed at exempting Palestinian and Kashmiri fighters from being considered “terrorists” under international law when they launch attacks on Israeli or Indian soldiers who currently occupy their lands. The African Union and League of Arab States share the OIC’s perspective: Both bodies have adopted regional terrorism conventions that exclude struggles for national liberation from their definition of terrorism.

According to George Bisharat, an emeritus professor at the University of California’s Hastings College of the Law, “terrorism” is “a buzzword” intending to cast violence against occupation soldiers as illegitimate. In Israel/Palestine, “it’s being used for its political and rhetorical impact to discredit any violent resistance against Israel’s occupation,” he said, which is why “the non-aligned nations, as they call themselves, are insistent on the principle that violence exercised to advance the right of self-determination is not illegal.”

Armed struggle is not the only form of Palestinian resistance that has been cast as “terrorism.” In 2019, Danny Danon, Israel’s UN ambassador, said the International Criminal Court’s decision to open an investigation into alleged Israeli war crimes was “diplomatic terrorism” waged by the Palestinian Authority, which requested the international inquiry. In July 2021, Israeli President Isaac Herzog called the Boycott, Divestment, Sanctions movement targeting Israel “a new sort of terrorism” called “economic terrorism.” In October 2021, Israel declared six leading Palestinian human rights groups as illegal “terrorist” groups because of alleged links to the Popular Front for the Liberation of Palestine, a Palestinian political movement with an armed wing. Labeling all forms of resistance as “terrorism” is a strategy to justify Israeli repression, said Yousef Munayyer, a writer and a scholar at the Arab Center Washington DC. “It’s a lot easier to shut down human rights organizations if you can brand them as terrorists first. It’s a lot easier to carry out extrajudicial assassinations if you brand the targets as terrorists,” said Munayyer. “The purpose of all of this is to create as much leeway as possible for the most violent and repressive type of action to eliminate any form of resistance.”