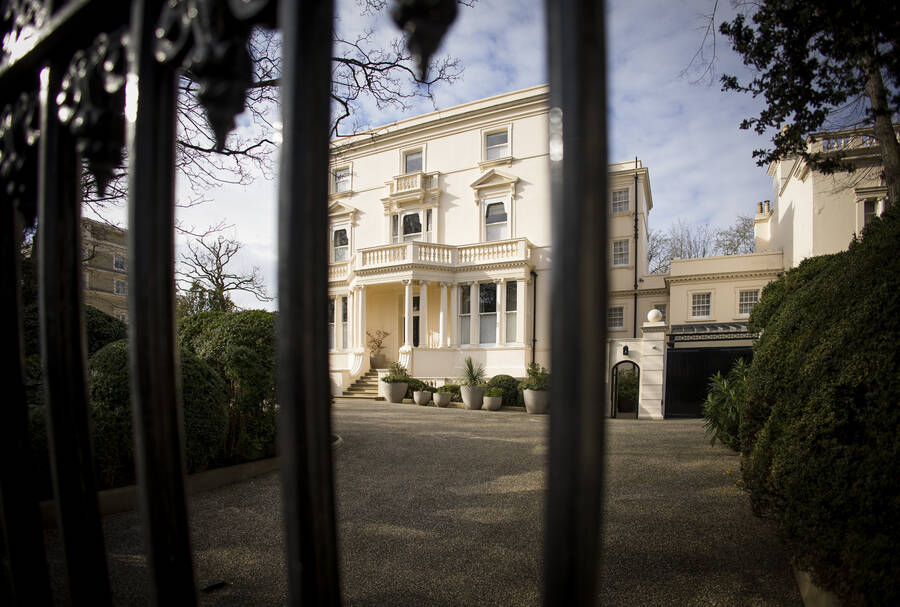 The London home of Roman Abramovich on Kensington Palace Gardens (pictured today, March 10th, 2022), which is reportedly to be up for sale. The UK government has placed sanctions on Abramovich and his assets.

LAST THURSDAY, Jewish Currents published my feature on Roman Abramovich, covering his stratospheric rise to the global billionaire class, his extensive financial support for the Jewish institutional world, and how Russia’s invasion of Ukraine is forcing a moral reckoning over that philanthropy. In the week since, a lot has happened to Abramovich and his fellow Russian oligarchs. For this week’s newsletter (subscribe here), I wanted to offer a follow-up outlining how both Western governments and specifically Jewish institutions are responding to the oligarchs as the war in Ukraine rages on.

Earlier today, the British government officially sanctioned Abramovich along with six other Russian oligarchs (Oleg Deripaska, Igor Sechin, Andrey Kostin, Alexei Miller, Nikolai Tokarev, and Dmitri Lebedev) who join a growing list of individuals facing harsh penalties since Russia launched its invasion two weeks ago. None of them will be able to visit or do business in the United Kingdom, where their assets (an estimated £15 billion in total) have been frozen. “The blood of the Ukrainian people is on their hands,” UK Foreign Secretary Liz Truss said of the sanctioned oligarchs.

Abramovich’s inclusion is a huge story in the British press, because it means the Chelsea Football Club—which he has owned since 2003, and which has become a championship team thanks to the roughly £2 billion he’s sunk into it—is now in an unprecedented state of limbo. The club, which Abramovich announced his intention to sell last week, can no longer be sold without the British government’s approval; and even then, Abramovich can’t collect any money from the sale. Chelsea will be allowed to continue to compete and to pay player salaries, but its activities are now highly restricted: The club can’t sell new tickets or merchandise for the rest of the season, and can’t sign or transfer players.

Depending on one’s loyalties, this is either very upsetting or very amusing for British football fans (many Chelsea supporters continue to revere Abramovich and to chant his name during matches), but either way, it carries wider implications for beneficiaries of Abramovich’s charitable giving. Within hours of the new sanctions, Yad Vashem—Israel’s main Holocaust museum, to which Abramovich pledged an eight-figure donation last month just ahead of the invasion—announced that it will be “suspending its strategic partnership” with Abramovich. This is a dramatic reversal from last week, when it was revealed that Yad Vashem and multiple other Israeli organizations that have taken money from Abramovich were lobbying the United States government not to sanction the billionaire (which, so far, the US has not done).

Yad Vashem aside, it’s still not clear whether the oligarchs will now become radioactive in the wider Jewish institutional world. The Anti-Defamation League, which told me four days into the war that it stood by an earlier statement that it “proudly supports the ‘Say No To Antisemitism’ campaign and the wide range of activities by Chelsea FC to tackle antisemitism globally,” did not respond to an email this afternoon asking whether either the UK’s decision to sanction Abramovich or Yad Vashem’s decision to cut ties changes anything. Other Jewish organizations that have collaborated with Chelsea’s “Say No to Antisemitism” campaign, including the World Jewish Congress and the Conference of Presidents of Major American Jewish Organizations, did not respond to multiple requests for comment ahead of my original feature. The heads of these and other leading US and UK Jewish organizations continue to be listed as members of the campaign’s steering committee on its official website.

The Jewish world is contested terrain for Russia and Ukraine in their escalating propaganda war. Ukrainian President Volodymyr Zelensky, who is Jewish, has requested to address Yad Vashem in addition to Israel’s Knesset, both of which he hopes will come out firmly on Ukraine’s side. Israel, for its part, has attempted to act as a neutral broker between Russia and Ukraine, drawing on deep relations with both countries facilitated in part by person-to-person ties, including in the form of ultrarich dual citizens like Abramovich. Such figures are not monolithic; on Tuesday, the Russian-born Israeli billionaire Leonid Nevzlin announced that he is renouncing his Russian citizenship, posting on Facebook that “Everything Putin touches dies” and that “Russia has become too fascist.” Nevzlin, who owns 25% of Haaretz shares, is a former business partner of Mikhail Khodorkovsky, another Jewish oligarch who spent ten years in a Siberian prison after criticizing Vladimir Putin for corruption, and who now lives in exile in the UK. Last week, Khodorkovsky described the invasion of Ukraine as “suicide for Putin.”

Some members of this first wave of Russia’s oligarchs, who built their fortunes in the 1990s prior to Putin’s rise, have been denouncing Putin and Russia for years now. By contrast, oligarchs like Abramovich or Deripaska have worked closely with Putin and are now being targeted for precisely that reason. It’s in this context that the oligarchs’ links to Israel’s government could play a major role in protecting them from global isolation. As Haaretz reported earlier today, these links are extensive: oligarchs Viktor Vekselberg and Len Blavatnik have invested in Fifth Dimension, a tech company previously run by Defense Minister Benny Gantz; Finance Minister Avigdor Lieberman has a close relationship with the oligarch and Tel Aviv real estate magnate Michael Cherny; and Housing Minister Ze’ev Elkin has received loan guarantees from multiple Russian oligarchs, among other examples. The United Arab Emirates, which normalized relations with Israel as part of the Trump administration’s “Abraham Accords” and which has become a de facto regional ally of Israel in recent years, also appears to be a rare safe haven for the oligarchs to park their wealth in right now, according to a report in The New York Times yesterday. Given all these connections, it’s understandable why Israel might be hesitant to denounce Russia’s invasion as stridently as most Western governments have.

At the same time, Ukraine has its own oligarchs with links to Israel, and many of the Russian Jewish oligarchs also have links to Ukraine and have attempted to distance themselves from Putin’s invasion by giving money to Ukrainian Jews. As JTA’s Asaf Shalev reported last week, the Genesis philanthropy group—founded by the Russian Jewish oligarchs Mikhail Fridman, Petr Aven, and German Khan, all of whom are widely seen as connected to Putin—has donated $10 million to Jewish communities in Ukraine since the invasion. Fridman is one of several oligarchs, including Deripaska and Abramovich, who have called for peace talks between Russia and Ukraine, though to what extent their motivation is sincere versus self-interested—given the immense costs the war is likely to impose on them—is impossible to know.

Fridman is also, along with Khan, a major donor to the Babi Yar (Babyn Yar in Ukrainian) memorial in Ukraine’s capital of Kyiv, which is the subject of a print feature by Linda Kinstler in the imminently forthcoming Jewish Currents Soviet Issue. In an interview with Tablet published on Monday, the former Soviet dissident and refusenik Natan Sharansky—who chairs the advisory board of the memorial—was asked about Fridman and other “Putin-linked oligarchs” and their effect on Jewish life in Israel and the diaspora. Even as he wholeheartedly condemned Putin’s invasion, Sharansky praised Fridman and similar billionaire donors, saying they give “to the defense of Jewish communities all over the world, and bring not only their pride in being Jewish and their financial generosity but also new ideas, like the Genesis Prize and of course the Babyn Yar memorial,” while at the same time saying this shouldn’t factor into whether he and other oligarchs are sanctioned over Ukraine. Of the sanctions, Sharansky added, “I hope that they will be employed with real criteria and with real action, and not simply to contribute to this atmosphere of hating all these rich Russians.” Sharansky’s ambivalence seems to reflect much of the Jewish communal world’s right now, as prominent individuals and institutions struggle to reconcile disapproval of Putin’s war with a complex web of financial and personal ties to Putin’s inner circle.