The Hijacking of Atonement

In Germany, the legacy of the Holocaust is used to silence critics of Israel. 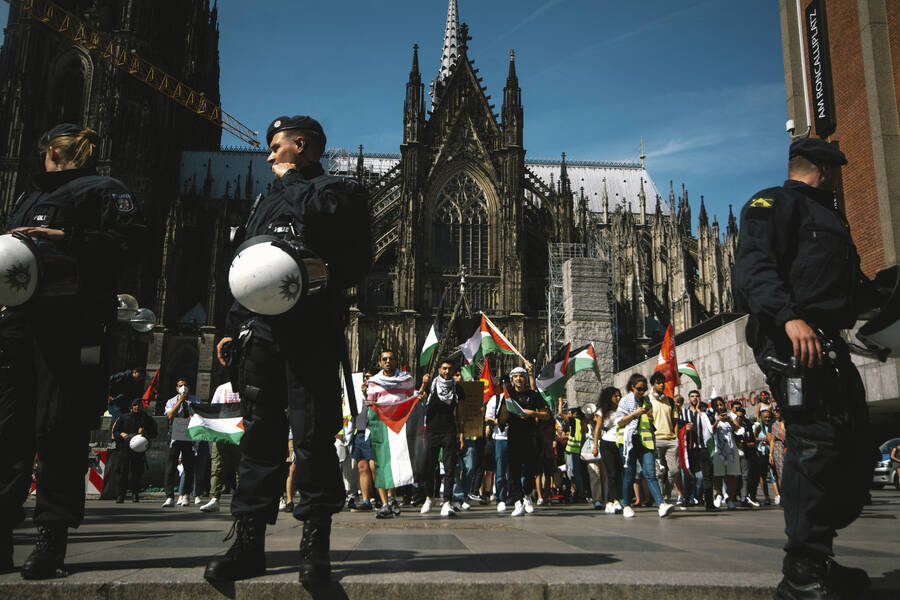 Protesters against a German court decision to ban pro-Palestine protests in Berlin after the killing of Al Jazeera journalist Shireen Abu Akleh gather in front of the Dom Cathedral in Cologne, Germany, May 15th, 2022.

(This article previously appeared in the Jewish Currents email newsletter; subscribe here! A version of it was originally published on my Substack.)

AS GRIM as the debate over Israel-Palestine is in the United States, what’s happening in Germany is even worse. I was there last week for a remarkable conference called “Hijacking Memory: The Holocaust and The New Right,” which—among other things—detailed the extraordinary censorship that supporters of Palestinian rights face in Germany. While there, I learned a lot about what has gone wrong in Germany, and how Germans might think differently about their historical burden.

In 2019, Germany’s parliament, the Bundestag, passed a resolution declaring that the movement to boycott, divest from, and sanction Israel (BDS) was, in its “argumentation, patterns and methods,” antisemitic. The resolution compared boycotts of Israel to Nazi boycotts of Jews—ignoring the fact that Palestinian civil society groups created the BDS movement because they want “full equality” with Jews while the Nazis boycotted Jews because they wanted exactly the opposite. Germany’s parliament also called on the German government to deny funding to any group that supports BDS or opposes Israel being a Jewish state. On these grounds, some of Germany’s largest cities have barred supporters of Palestinian rights from speaking, performing or exhibiting in any institution which receives public funding—which rules out most cultural and intellectual institutions in the country.

The parliament’s resolution is not legally binding, and courts have ruled many of the local ordinances unconstitutional. But for supporters of Palestinian freedom, the consequences have nonetheless been disastrous. In 2020, Haaretz reported on the travails of Nirit Sommerfeld, a popular Israeli-born German performer who sings in German and Yiddish about different aspects of the Jewish experience in Germany, including her grandfather’s murder at Sachsenhausen. For years, she had regularly received public funds for her performances, as do many German artists. But in 2018, after complaints about her criticism of Israel, the city of Munich’s cultural department refused. A club would not rent her space unless she signed a statement pledging not to say anything that could be deemed antisemitic. Around the same time, a group of Israeli students in Berlin prepared a set of online lectures at their art school as part of their internal reading group called “The School for Unlearning Zionism.” After complaints that the lectures constituted antisemitism, as defined by the German parliament, the school withdrew funding and shut down the students’ website.

There are too many stories like this to recount. Weeks after the Bundestag’s resolution, the highly respected director of Berlin’s Jewish Museum was forced to resign—despite a public letter in his defense from more than 400 Jewish Studies scholars—after right-wing critics claimed that an exhibition on the history of Jerusalem devoted too much attention to the city’s Muslim past. Doing so was construed as possibly antisemitic, especially after a museum spokesperson criticized the Bundestag resolution. This April, city officials in Berlin temporarily banned a march protesting Israeli violence in Jerusalem on the grounds that it might foment antisemitism. Last year, a German public broadcasting company retracted its decision to name Nemi El-Hassan, a German-Palestinian journalist, as the new host of a science program after a right-wing tabloid discovered a photo of her at a pro-Palestinian rally in Berlin organized by the Iranian government. El-Hassan had attended the rally when she was 20 years old, and although speakers at the event have in the past been accused of antisemitic remarks, no one has alleged that she made any. Nonetheless, she apologized profusely. It didn’t matter. After critics discovered that she had “liked” Instagram posts by the anti-Zionist Jewish group Jewish Voice for Peace (JVP), the broadcaster withdrew the job.

In the words of Susan Neiman, “What has emerged in the past two years is atonement gone haywire.” It’s gone haywire because the Israeli government, in partnership with the German right, has been allowed to define how Germans should atone for their genocidally antisemitic past. Neiman, along with Dische-Becker and the historian Stefanie Schüler-Springorum, organized last weekend’s “Hijacking Memory” conference in an effort to marshal a response. But it’s not only memory that has been hijacked in Germany. Atonement has been hijacked too.

Many Germans rightly feel guilty about the Holocaust, and as Neiman has written, no nation has taken more responsibility for its historical crimes. But the Israeli government and its German allies have told Germans that because their ancestors murdered Jews, they must defend the Jewish state. That’s analytically and morally wrong. It’s analytically wrong because the Jews murdered in the Holocaust had diverse opinions about Jewish statehood. Many were anti-Zionists, the very ideology the Bundestag has declared antisemitic. It’s morally wrong because the Holocaust wasn’t evil simply because the Nazis murdered Jews, but because the Nazis murdered human beings, many of whom were Jews. That means that if today’s Germans bear a special moral responsibility because their nation committed the 20th century’s greatest crime, that moral responsibility is not to Jews in particular. It is to the cause of human dignity. So when German authorities prevent Germans from championing the dignity of Palestinians—including through boycotts—they’re not upholding the moral responsibility that history has imposed. They’re betraying it.

Many Germans dread being called antisemitic. In her opening remarks at the “Hijacking Memory” conference, Neiman quoted a German scholar who declared that “to be called an antisemite is the worst thing that can happen to a German.” And when it comes to defining antisemitism, many non-Jewish Germans may feel they should defer to Jews. In theory, that reflects admirable humility. The problem is that when it comes to defining antisemitism, Jews disagree. Some Jews have so dehumanized Palestinians that they see even nonviolent demands for equality as Jew-hatred. Others see the Palestinian struggle for freedom as consistent with Judaism’s highest ideals. There is no Jewish consensus; there is merely a power imbalance, because the dehumanizers control Israel’s government, which has a vested interest in being able to abuse Palestinians with impunity. And the most influential Jewish institutions in Germany—as in most other diaspora countries—mimic the Israeli government line. One reason Israel and its local allies work so hard to cancel Jewish critics of Israel like Nirit Sommerfeld is because those critics undermine their claim to speak for Jews as a whole.

Jews can’t relieve non-Jewish Germans of the burden of determining what is and isn’t Jew-hatred. After listening to our cacophony, they must decide for themselves. They might start by asking which ideals they hold most dear. If one of those ideals is equality under the law, then advocating for it in Israel-Palestine—which means turning a state that privileges Jews into a state that does not discriminate based on nationality, ethnicity, or religion—cannot be antisemitism. The German government must stop punishing its citizens for advocating for the very principles in Israel-Palestine that it claims to cherish in Germany.

Perhaps some Germans already privately believe that and are simply afraid. Who wants to be called a Jew-hater and thus risk losing one’s livelihood, one’s friends, one’s good name? Unfortunately, Jews who cherish Palestinian rights can’t protect them from such calumnies. We aren’t even powerful enough to protect ourselves. Following one’s conscience takes courage.

But consider the courage it requires for Palestinians to protest in the West Bank, East Jerusalem, or the Gaza Strip when doing so frequently gets them maimed, imprisoned, or killed. Or the courage that was required to meet the moral challenge that faced a prior German generation in Germany’s darkest hour. If the crimes Germany committed during the Holocaust were far greater than the ones Israel is committing now, the price for standing against them was far greater too. Today the risk is defamation and dismissal, not jail or death. If today’s Germans condemn their grandparents for not risking everything, surely they can risk much less.

Do Palestinians deserve equality and freedom? For me, answering yes is a matter of Jewish honor. Perhaps, given our strangely entangled histories, it should be a matter of German honor too.