Seven Arab and Muslim journalists have lost their jobs for the alleged “antisemitism” of criticizing Israel. 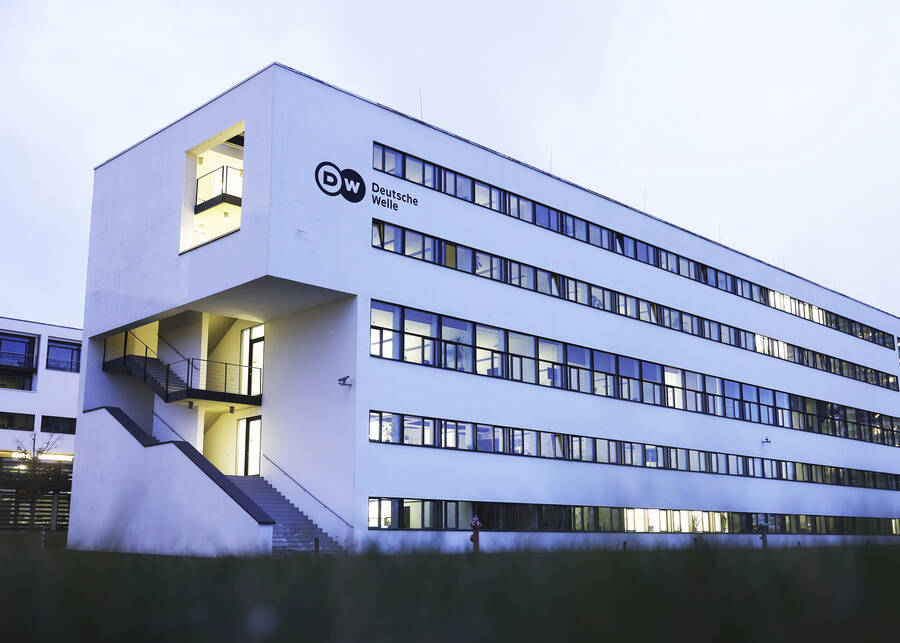 The headquarters of Deutsche Welle in Bonn, Germany, February 4th, 2022.

LAST NOVEMBER, the German news outlet Südduetche Zeitung published a story examining instances of what it labeled “antisemitism” expressed by employees of the German government-funded news outlet Deutsche Welle (DW). One of the employees mentioned in the report was Maram Salem, a Palestinian from the Hebron area in the occupied West Bank who had been working for DW’s website since 2020. The report noted that during Israel’s bombing campaign targeting Gaza last May, Salem wrote on Facebook that she encrypts or deletes some of her posts because they could get her in trouble at her job. She went on to write that, in Europe, freedom of speech is an “illusion,” because writing about the Palestinian cause can get one fired or deported.

In early December, Salem was suspended from her job as part of a DW probe into alleged antisemitism among its employees and news partners overseas. Last week, her suspension became permanent when she and four other Arab journalists were fired for what the outlet claimed were antisemitic comments on social media. On Monday, DW fired two more Palestinian journalists.

While Salem suspects the Facebook post that Südduetche Zeitung highlighted is the reason for her firing, she’s still not sure; DW management has not explained to her why she was fired. She says the investigation that resulted in her firing proves the point she was making in the Facebook post—that dissent over support for Israel is taboo in Europe, especially when aired by Arabs or Muslims.

After being fired, “some of my colleagues called to say, ‘please delete messages between us.’ They didn’t want anything to do with me,” Salem told Jewish Currents in an interview. “You think in Germany you’re a journalist who is protected, but you live in fear. It reminds me of dictatorships. And I come from a region where journalistic views and journalistic freedom of speech have always been attacked. It feels exactly the same.”

Salem is only the latest example of how Germany’s decades-long effort to make amends to Jews following the Holocaust has led to a conflation of Zionism with Judaism, resulting in a severely repressive atmosphere surrounding speech that dissents from the country’s uncompromising support for Israel. The notion that anti-Zionism is antisemitism is widely accepted in German elite circles; during a sentencing hearing of a protester who participated in anti-Israel demonstrations in 2015, for instance, a German judge proclaimed that “‘Zionist’ is the language of anti-Semites, the code for ‘Jew,’” thus deeming any criticism of the political ideology of Zionism as antisemitic. In May 2019, the German parliament passed a nonbinding resolution deeming the global Boycott, Divestment, Sanctions (BDS) movement antisemitic, comparing it to Nazi boycotts of Jewish businesses.

“Germany’s commitment to atoning for the Holocaust is probably the deepest part of its current identity. For a German today, the very worst accusation is to be called an antisemite, which makes Germans more vulnerable than anyone to the weaponization of the accusation,” said Susan Neiman, who is the director of the Einstein Forum, an independent think tank in Germany, and the author of the book Learning From the Germans: Race and the Memory of Evil. “What has emerged in the past two years is atonement gone haywire, with straightforward McCarthyite practices in which many people, from the director of the Jewish Museum in Berlin to the Palestinian German journalist Nemi El-Hassan, have been forced from their jobs, and many others have been denied funding, prizes, or performance space.”

Now DW’s public inquiry into its employees’ alleged antisemitism is furthering the German cultural elite’s attempt to quash criticism of Israel. The report—co-authored by controversial Israeli Palestinian psychologist Ahmad Mansour, who, as Electronic Intifada notes, once said that “mainstream Arabs have huge problems with democracy and everything connected to human rights”—calls for including the International Holocaust Remembrance Alliance definition of antisemitism in the employee guidelines at DW’s Middle East office. The IHRA definition is particularly controversial, since it equates certain criticisms of Israel and Zionism with antisemitism.

DW is establishing an extreme precedent. “Many other newspapers might want to adopt the same recommendations that Deutsche Welle included,” said Giovanni Fassina, Program Director for the European Legal Support Center, a group that defends Palestinian rights advocates in Europe from repression and that is offering legal support to Farah Maraqa, one of the fired journalists. “If other newspapers start adopting the IHRA definition and use it as a term of reference for screening the social media of their employees, this could create a huge chilling effect on their Palestinian, Arab, or Muslim staff.”

The seven fired journalists all worked at Deutsche Welle’s Arabic service. Some of them made statements that could reasonably be described as antisemitic regardless of one’s feelings about Zionism. For instance, Daoud Ibrahim, a freelancer for DW based in Lebanon, once tweeted, “the Holocaust is a lie #FreedomOfSpeech.” (Ibrahim told a Lebanese paper he doesn’t actually believe what he wrote, but that he was trying to point to a double standard on free speech in Europe.)

But others, such as Salem and Farah Maraqa, seem to be victims of a smear campaign. In Maraqa’s case, the firing stems from the German news media taking notice of an article Maraqa had written seven years ago, in which she sarcastically wrote she would support ISIS if they took on Israel. According to the Euro-Med Human Rights Monitor, Maraqa’s article “reads as an argumentum ad absurdum or the appeal to extremes, in which she attempts to establish a claim that [ISIS] is merely exploiting the Palestinian cause by showing that the opposite scenario would lead to absurdity.”

Now, Salem and Maraqa are out of jobs, and Salem says she fears she won’t ever find work in media again.

“They called us Holocaust deniers. They told us that we don’t believe in the existence of Israel. We are five different cases but they put all of us in one pot and accused us of doing the same thing,” said Salem. “This means it will be impossible to have a job in Germany, especially in journalism. It’s the end of the story.”