Worse, it allows a more conservative minority of Jews to stand for the whole community. 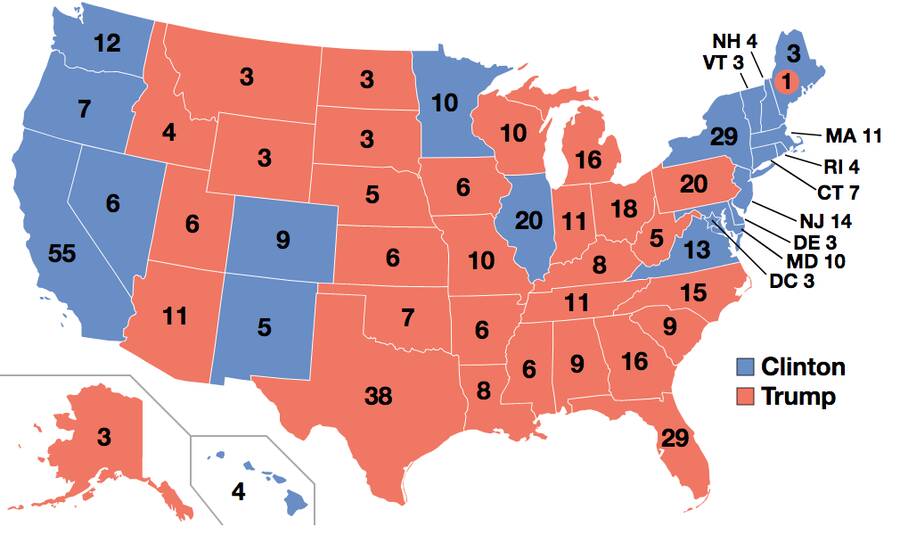 IN RECENT WEEKS, several Democratic presidential candidates have broken a longstanding taboo in American politics: they’ve come out against the Electoral College. In doing so, they have helped reopen a national debate on how Americans elect our president. The arguments they offer in favor of a national popular vote instead of the Electoral College are many and familiar: the Electoral College gives outsize weight to swing states and rural voters; it allows the elections of presidents who fail to secure popular mandates, like George W. Bush and Donald Trump; and it is an institution rooted in slavery. Polls show roughly two-thirds of Americans agree

Let’s add another reason to the list: it discriminates against Jews.

This was not, of course, the intent of the Constitution’s framers—unlike maximizing the power of slaveholders, which actually was intentional. But in practice, the Electoral College minimizes the vote of most American Jews, while giving disproportionate influence to a right-leaning minority of us.

While Jews live in all 50 states, we are disproportionately concentrated in major urban areas, like the Northeast corridor and Greater Los Angeles. In fact, nearly two-thirds of all American Jews live in just six states: New York, New Jersey, California, Massachusetts, Illinois, and Maryland.

What do all those states have in common? All of them have voted for the Democratic candidate for president in every election since 1992, by reliably safe margins. That means that in presidential elections, the vast majority of American Jews are ignored by candidates who skip their states and take their support—or lack thereof—for granted. This problem is not unique to Jews—other ethnic and religious groups concentrated in strongly Democratic or Republican states face similar underrepresentation. Hindus, for example, are disproportionately concentrated in deep blue New Jersey and California.

But the Electoral College doesn’t only underrepresent most Jews—it overrepresents a minority of us. While making up less than 10% of the American Jewish population, the Jews of Florida wield disproportionate influence in presidential politics. Their position as a substantial demographic group in a swing state has garnered them New York Times profiles, key campaign visits, and even the attention of comedian Sarah Silverman.

All of this influence means that in presidential politics, Florida’s Jews have come to be seen as a proxy for American Jews as a whole, even though they are far from representative. In Palm Beach County, where nearly 40% of Florida’s Jews live, nearly half of the Jewish community is age 65 or older, and the average age is 70—conforming to the typical view of the Sunshine State as “God’s waiting room.” In the country as a whole, however, only 26% of Jews are over 65, roughly the same as the share of Jews who are millennials.

This demographic gap has major political implications. Compared to their 65+ counterparts, Gen Z and the youngest cohort of millennial Jews (aged 18-29) are more likely to identify as liberal, support more government services, be secular, and define their Judaism separately from Israel. In fact, while more than half of American Jews over 65 say caring about Israel is essential to their Judaism, less than a third of millennial Jews feel that way. And these figures are just from the Pew Research Center’s last major survey of American Jews in 2013; as other studies have shown, the age gap on views of race, immigration, the role of government and Israel have only grown.

The result is that left-wing, young, and Israel-critical American Jews face double erasure with the Electoral College: not only are we ignored for largely living in safe Democratic states, but our older, more conservative, and deeply Zionist counterparts in Florida are seen by candidates as speaking for us.

We see this dynamic play out outside of elections as well. In the wake of the controversy around Ilhan Omar’s criticism of the Israel lobby, conservative pundits like Meghan McCain have cried antisemitism, despite many young Jews, like myself, wholeheartedly agreeing with and supporting Omar.

As establishment Jewish groups like AIPAC come under increasing fire from young Jews—and are even being stood up by many presidential candidates—the Electoral College’s distortions of American Jewry become even more obvious. Particularly as Israel’s government has become more determined than ever to build settlements, ignore Palestinian human rights, and sabotage any hope of peace, it is crucial for the growing number of American Jews against the occupation to be heard.

But this isn’t just about Israel: at a time when young people have been leading the movement for major government programs like Medicare For All or a Green New Deal, we cannot let a minority of more conservative retirees speak for Jews as a whole.

A national popular vote is the only truly democratic system for electing a president. And it’s the only system that would reflect the full ideological spectrum of American Jewry in national politics.

Report
What Happened to IfNotNow?
The close of the Trump era finds the millennial anti-occupation group at a crossroads.
Aaron Freedman
Essay
If You Prick Watto, Does He Not Bleed?
Twenty years after The Phantom Menace, an antisemitic caricature reconsidered.
Aaron Freedman
Sign up for our email newsletter, featuring exclusive original content