If You Prick Watto, Does He Not Bleed?

Twenty years after The Phantom Menace, an antisemitic caricature reconsidered. 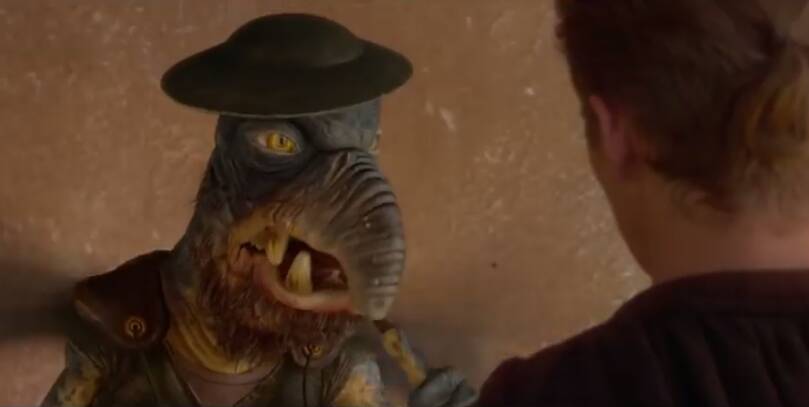 TWENTY YEARS AGO, George Lucas kicked off his reviled Star Wars prequel trilogy with Episode I – The Phantom Menace. Despite grossing over a billion dollars worldwide, the film received tepid reviews and continues to be a sore spot for Star Wars fans for many reasons, including but not limited to its insipid dialogue, its incoherent plot, and the presence of multiple alien creatures who read as racist caricatures. One of them, Watto—a slave-owning, junk-dealing, podrace-betting, beer belly-clutching, insect-like shyster—is, unfortunately, the closest thing the Star Wars universe has to a Jewish character.

While Watto may hail from the swamp planet of Toydaria, he’s as much a yid as Tevye the dairyman. From his large, hooked nose, to the metal skullcap he boasts in Episode II – Attack of the Clones (oh yes, he was brought back for an encore), to his response to Liam Neeson’s goyishe Jedi, Qui-Gon Jinn, attempting to use the Force on him—“Mind tricks don’t work on me, only money”—Watto is a galactic Shylock.

Since The Phantom Menace first debuted in the summer of 1999, reviewers have widely observed that Watto bears more than a passing resemblance to an antisemitic caricature. In his write-up for The Village Voice, J. Hoberman called out Watto as the single most offensive stereotype in a movie riddled with them, including the seemingly Jamaican Jar Jar Binks and Yellow Peril-inspired Trade Federation leaders. Patricia Williams in The Nation noted Watto’s “striking similarity” to a cartoon published in Austria’s antisemitic Kikeriki magazine at the turn of the 20th century. Slate even ran a piece focused on Watto, simply titled “The Merchant of Menace.”

And like his Earth-born counterpart, this Merchant of Tatooine has left a complicated legacy to the Jewish viewer. On the one hand, Watto is a Der Stürmer cartoon rendered in space. He’s not only a greedy, cheating slave-owner—he’s also the tormentor of Shmi and Anakin Skywalker, the Star Wars universe’s own Madonna and Christ. Much like the unscrupulous, greedy banker goblins in the Harry Potter books, Watto reflects antisemitic tropes that are so deeply embedded in popular culture that they can appear regardless of a creator’s conscious intent.

On the other hand, Watto is the only representation we Jews get in the Star Wars franchise. As a middle schooler obsessed with the prequels (it was a difficult time to be a Star Wars fan), I took a perverse pride in how this clever Jew outwits the crusader-esque Jedi. How much can we really begrudge Watto for following the cruel economic norms of Tatooine, like the frontier Jewish merchants of yore? He is, after all, a small fry compared to the Hutt crime lords from whom he won the Skywalkers in a bet.

It is tempting to extend to Watto the same revisionist treatment that Shakespeare’s Shylock has received in recent decades, turning a character who was originally played as a grotesque caricature for comic relief into arguably the star of The Merchant of Venice (portrayed by the likes of Laurence Olivier, Patrick Stewart, and Al Pacino)—a strong-willed but principled victim of a viciously antisemitic society. But as progressive Jews, we cannot simply ignore Watto’s slave-owning—an inhumane (or perhaps intoydarian) practice far more depraved than Shylock’s acts of vengeance. Particularly as white nationalists and antisemites here on Earth advance the pernicious narrative of Jews as the master orchestrators of the slave trade (a myth, although there is no denying that individual Jews were participants), our solidarity would be misplaced if we were to excuse Watto’s participation in such an immoral institution.

However, we must acknowledge Watto’s key role in the story—as a grotesque foil to the larger, structural inequality and oppression of the Outer Rim of the galaxy. Like Shylock, who distracts the audience from the true, malevolent power of the Venetian oligarchy, Watto is but a bit player next to the kleptocratic Hutt regime. The gangster species is responsible not only for overseeing and participating in the slave trade, but also for encouraging an economy centered on gambling, smuggling, and vice at the cost of productive investment in Tatooine’s harsh desert landscape. Watto appears to enjoy no political rights in this racially stratified society, and, as a petit bourgeois junk trader with a penchant for gambling, he has minimal resource surplus to hoard or productively spend. Based on the look of his shabby shop, Watto harks back to the classic frontier dry goods dealer, a far cry in economic might from the railroad and mining companies that dominated desert societies like the 19th century American West.

But even the Hutts are merely symptomatic of the deeper institutional rot of the Galactic Republic as portrayed in the prequel trilogy. A weak, aloof bureaucracy overseen by opportunistic elites, the Republic offers little political and economic opportunity to denizens of the Outer Rim. Instead, as political scientist Jonathan M. Ladd has written, it relies on a theocratic Jedi militia to enforce its mandate throughout the galaxy. The Jedi are armed priests who essentially kidnap and brainwash young children, after testing their DNA to determine their genetic worthiness, to be raised as fanatical soldiers. Watto, as a small-time merchant on a backwater planet beyond the reach of the Republic, has only a minor impact on the sociopolitical dynamics that drive the Star Wars saga: the Clone Wars, the rise of the autocratic Chancellor-turned-Emperor Palpatine, and the eventual genocide of the Jedi.

The Phantom Menace was a real missed opportunity, not only to launch a provocative critique of antebellum galactic political economy, but to give a nuanced portrayal of a stigmatized provincial merchant just trying to get by in a corrupt system he didn’t create and can’t control. Left-wing Jewish artists here on Earth have often struggled to portray the most unsavory and immoral elements in our communities honestly but without indulging antisemites looking for proof of their stereotypes. The Yiddish playwright Sholem Asch wrestled with this when his God of Vengeance achieved wide renown and controversy for its portrayal of an autocratic Orthodox Jewish brothel owner. More recently, the Italian-Jewish playwright Stefano Massini’s The Lehman Trilogy carefully walks the line between unsparing critique of the titular banking family—which got its start as cotton brokers to Southern slave-owners—and avoiding the trope of the unscrupulous Jewish merchant.

In Attack of the Clones, a fully grown Anakin returns to Tatooine in search of his mother. There he finds an older, kinder Watto who appears happy to see the former slave he once tormented, and no more prosperous than he was when Anakin was still a child. Enthusiastically, he tells Anakin that he sold his mother to a man who freed and married her. What do we make of this Watto? Perhaps he is genuinely pleased to see his former slaves go on to live better lives. Though there is no excusing his past, this is a Watto who seems less a villain and more a representative figure of a society in which survival comes at a moral cost.

He may not be quite Shakespearen, but the forlorn Watto Star Wars leaves us with is enough to make this Jew feel a pang of empathy for a fellow rootless cosmopolitan in a galaxy far, far away.

Report
What Happened to IfNotNow?
The close of the Trump era finds the millennial anti-occupation group at a crossroads.
Aaron Freedman
Essay
The Electoral College Erases the Jewish Vote
Worse, it allows a more conservative minority of Jews to stand for the whole community.
Aaron Freedman
Sign up for our email newsletter, featuring exclusive original content
Short on time?
Sign up for our weekly Monday roundup of everything you missed in Jewish Currents last week.