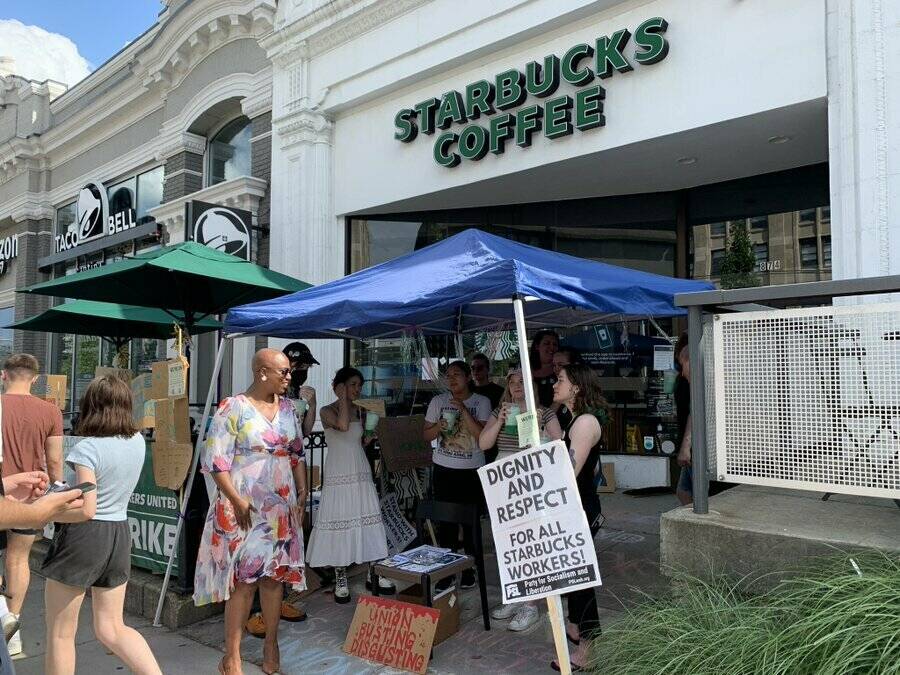 THE STARBUCKS STORE at 874 Commonwealth Avenue in Brookline, Massachusetts sits on a bustling commercial strip on Boston University’s campus just opposite a Green Line T station. Last month, all 22 workers at the location walked off the job to protest the company’s alleged Unfair Labor Practices (ULPs)—essentially, violations of federal labor law. The workers are all members of Starbucks Workers United (SWU), the “upstart” union that has taken on the country’s eighth-largest employer, organizing 216 (and counting) of roughly 9,000 Starbucks stores across the country in just the past eight months. The June 3rd decision to unionize at 874 Commonwealth was unanimous, as it has been at many now-unionized stores—and despite its progressive self-branding, Starbucks’s retaliation was swift. Less than a week after the election, Starbucks brought in a new store manager, Tomi Chorlian, who immediately began to change working conditions for the worse. Workers allege that within hours of entering the store, Chorlian had taken down the pride flag in a largely queer workplace, and over the following weeks, she denigrated a Black worker’s hair, contaminated the store’s mixer with allergens, denied bereavement leave to a grieving worker, called two Asian workers by each others’ names, and refused to respect non-binary workers’ pronouns.

Chorlian also took steps to make workers more precarious. “After we unionized,” barista Sarah Chan told Jewish Currents, Chorlian “began cutting hours for everyone to the point where our ability to pay rent was at stake.” “I went from working an average of 35.5 hours per week to 18 hours per week,” said barista Lynne Chan, describing a drop in hours that could make them and their coworkers ineligible for benefits like healthcare. Chorlian promptly hired five new workers to fill regular baristas’ hours, clearly signaling that the cuts had been made in retaliation for union support. She also began scheduling shorter shifts so that workers would not get the 30-minute breaks legally required to break up six-hour shifts, and understaffing the store so that just one barista was holding down the register, taking orders, and preparing food. “We started having to skip the breaks we did get,” said barista Isabel Beaudry, “because it was so busy and there were not enough people to do all the things that need to be done.”

At a unionized workplace like 874 Commonwealth, any changes to working conditions are legally subject to collective bargaining, making Chorlian’s actions almost certainly illegal. “They are trying to make it too miserable to remain at the company so that the strong union supporters will just quit,” shift manager Spencer Costigan told Jewish Currents. “But we’re not that stupid. Rather than all of us quitting a job that we like, a job that we voted to unionize because we wanted to make it better . . . we decided to force the company to make her leave.” In a letter addressed to Starbucks’s Boston district manager and Chorlian, the workers demanded Chorlian’s immediate termination from the company, or at the very least, that she be removed from 874 Commonwealth and thoroughly retrained. The workers further demanded that decisions about hours and staffing be made in conversation with them. Until they win their demands, the workers have decided to remain on an indefinite strike—the first-ever such strike by SWU.

Typically, workers strike to gain concessions during contract negotiations with an employer, but what’s happening at 874 Commonwealth and other SWU-organized locations is different. Starbucks CEO Howard Schultz has publicly stated that he will never accept SWU, and managers across the country have followed suit by repeatedly firing organizers, closing union stores, and engaging in retaliatory scheduling. Recent strikes at Starbucks stores have been called in an attempt to resist such union-busting and implement existing labor law. The National Labor Relations Board (NLRB)—the top federal labor agency—has frustrated Starbucks workers by moving glacially in response to complaints by workers. At a picket line outside Boston’s regional NLRB office, Starbucks barista Tyler Daguerre declared, “We can’t rely on government agencies like the NLRB and politicians like Marty Walsh”—referring to the Biden administration’s Secretary of Labor, who served as mayor of Boston from 2014 to 2021—“while we’re fighting for our lives out here with this union busting.” Nationally, SWU has filed 276 charges of labor law violations against the company, most of which are still being investigated.

Such delays in labor law enforcement can nip an organizing campaign in the bud, as the NLRB’s general counsel, Jennifer Abruzzo, has herself recognized. SWU’s pace of unionizing new stores has slowed to a crawl in the past months in the face of Starbucks’s unchecked retaliation. Dan Abram, a barista at a non-unionized Boston-area Starbucks, said he has been keeping an eye on retaliation against SWU members in other parts of the country; in South Carolina, for instance, a store manager recently pressed kidnapping and assault charges against its unionizing workers. “I could see management going scorched earth at our store, and that makes me scared,” Abram said. “I want to see how contracts and bargaining go before we ever do anything toward unionizing.”

Even if the NLRB were able to move faster, its powers to sanction a company for ULPs are limited. For example, as SWU National Field Organizer Daisy Pitkin told Jewish Currents, when the Board reinstates a fired worker, it rules that the company must pay that worker their lost wages. “But the company gets to subtract any wages that the worker earned in the interim period,” Pitkin said. “So unless the worker was just sitting around—which no one can afford to do—the company has to pay them very little.” ULPs other than firing workers often have even weaker remedies, in some cases only requiring Starbucks to post a notice in its stores letting workers know it committed a ULP. As Pitkin observes in her recent book On the Line, “companies almost always stand to gain by breaking the law.”

Starbucks has taken full advantage of the profitability of violating labor law. On August 1st, the company launched its newest and perhaps most effective anti-union assault yet as it rolled out a suite of benefits—including an across-the-board raise, seniority-based pay bumps, better health insurance that covers gender-affirming surgery, and barista training programs—only for stores that had not unionized. In a recent interview with The Guardian, Abruzzo unequivocally stated that a company upgrading benefits only for its non-union stores is “unlawful” and “inherently discriminatory conduct.” But for all her union sympathies, Abruzzo’s grossly underfunded NLRB lacks the capacity to move much faster against a company’s labor law violations.

Pitkin said that Starbucks’s strategy of retaliating against union activity by selectively withholding benefits has “chilled the ground for new organizing.” “They are taking the union’s demands and giving them to workers, but doing so in the most petty way,” she added. Non-union workers who are supportive of SWU now face a dilemma: “I was hoping to access the transportation reimbursement for gender-confirmation surgery in the next year or two,” said Rafi McCoy, a barista at a Boston store that lost its union election earlier this year. McCoy’s store is going to receive that benefit because it remains non-union, but should it vote to unionize, it remains unclear what will happen. “Part of why I didn’t want to unionize this store was because of the raises and benefits,” said Abram, who nevertheless supports SWU and hopes it succeeds.

SWU is pursuing every legal avenue available to counter the success of the company’s benefits-based retaliation. “We are seeking an injunction to stop the unequal distribution of benefits,” Pitkin said, “and in the best-case scenario, the company would have to offer these benefits to all its stores.” Such a shift would be a huge win for the union, which would have successfully improved working conditions at Starbucks even prior to negotiating a contract. But while the slow legal process unfolds, SWU workers are also exercising their power directly. On August 1st, employees at five Starbucks stores in the Boston area marched out to protest the company’s benefits ULP, joining workers at stores across the country. These strikes aimed to pressure the company to obey federal law, and to enjoin the NLRB to enforce it.

Whether the strikes and injunctions succeed in restoring Starbucks’s workers’ hours and benefits remains to be seen. But spending time on the SWU picket line in Brookline makes it clear that whatever their effectiveness as a tool to enforce labor law, the strikes are already achieving a host of other things. In the past three weeks, 874 Commonwealth has become a mini-carnival complete with dancing, popsicles, and colorful sidewalk chalk listing baristas’ demands. By defiantly taking up space in full public view, workers on the line have drawn in supportive or curious community members and sparked ongoing conversations about what unions can do for working people.

Pitkin noted that each newly unionized Starbucks is not only a training ground for its own workers, but a beacon for would-be organizers in the surrounding area, both at Starbucks and beyond. The Commonwealth Avenue strike has served this function since it began, bringing baristas from Boston-area stores together in collective actions like the coordinated August 1st strike. Throughout the first week of August, whenever Starbucks tried to open one of its striking stores, baristas from multiple Boston locations would arrive to strengthen the picket line in question—the kind of coordinated regional action that could be critical in the future. Costigan describes the Boston-wide strike as “a dry run to get workers’ toes in the water of striking,” so that if an issue like 874 Commonwealth’s arises at other stores, workers will know what to do.

In addition to reinforcing union power at other Starbucks cafes, the 874 Commonwealth strike has also put unionizing on the radar for neighboring Target, Chipotle, Amazon, and Taco Bell locations, many of which have been offering material support to Starbucks workers throughout the strike. “When a Starbucks unionizes, all kinds of workers—in tech, retail, restaurants—walk in to ask how they can unionize their workplace,” Pitkin said. The SWU movement has gone from one store to hundreds with this model of worker-to-worker organizing spreading through “beacon” stores, and other retail unions seem to have followed suit. Even the company’s union-busting tactics have at times spurred the organizing momentum. Julie Langevin, a shift manager at a Starbucks just outside of Boston, told Jewish Currents that witnessing management’s behavior at the prospect of their store’s August 15th election made some of her co-workers realize that they do need a union.

Even as legal remedies to union-busting stall, SWU’s momentum slows, and workers are forced to strike to defend their rights rather than expand them, hope remains. In Pitkin’s words, “the ground is chilled—but not frozen.”

This piece has been updated.

Newsletter
The Legal Offensive on the Right to Strike
With a new Supreme Court case, employers are seeking to curb labor’s growing assertiveness on the shop floor.
Aparna Gopalan
Newsletter
A Leftist’s Guide to Inflation
How price spikes, and the backlash against them, threaten any kind of progressive agenda.
Aparna Gopalan
Sign up for our email newsletter, featuring exclusive original content
Want original reporting and analysis on Israel/Palestine?
Sign up for the Tuesday News Bulletin.