A commemoration of the Nakba in Queens was canceled over threats. 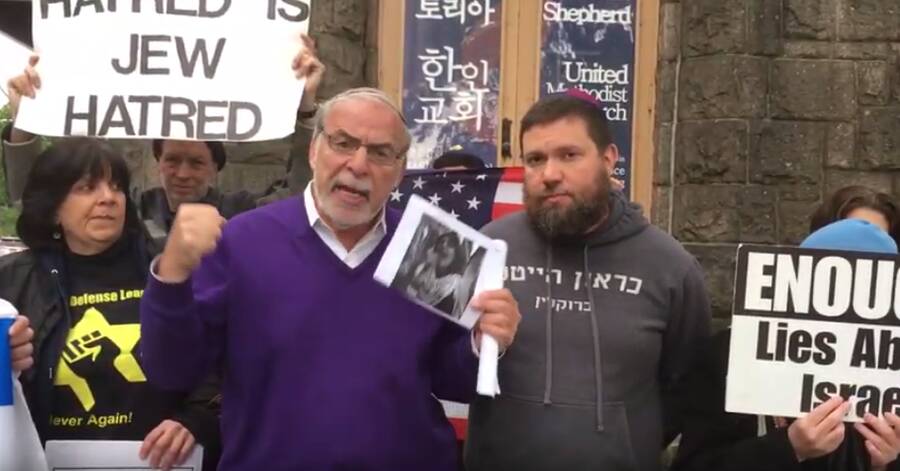 ON MAY 13TH, Caleb De Jong, a Democratic Socialists of America (DSA) member, walked into the Church of the Redeemer in Astoria, Queens to answer questions from the church board about an event on Palestine he had organized for the next day.

By the time he left the meeting, the event had been canceled.

It was supposed to be a community gathering to hear Palestinian-Americans speak about the Nakba—Israel’s 1948 ethnic cleansing of Palestine, commemorated on May 15th—the BDS movement, and US military aid to Israel. Instead, right-wing pro-Israel activists pressured the church—which had no involvement in the event other than renting out space—to jettison the gathering after a two-week campaign the church said consisted of hateful threats.

“We see at work the interest of extremist groups trying to gain currency . . . by stoking hatred against our Church,” the Episcopal congregation said in a statement about the attacks against them.

Stories like this have played out with alarming regularity in recent years, fueled by pro-Israel advocates who conflate criticism of the Jewish state with antisemitism. Palestine Legal, a group that defends activists’ right to speak on Palestine, says that over the last five years, there have been over 1,200 attempts across the US to suppress speech in favor of Palestinian rights.

When Zelig Krymko, an Astoria high school teacher, heard about the event, he sprung into action, contacting Jewish news outlets which then printed articles labeling the speakers as terrorist sympathizers. Local Israel advocates Krymko got in touch with ginned up outrage and planned a demonstration outside the event. Soon enough, the church began receiving threats by email and phone.

“The bullying and harassment that forced the church to cancel the event is part of a broader pattern of repression against speech advocating for Palestinian human rights,” said Meera Shah, a senior staff attorney at Palestine Legal. “We have seen over and over that opponents of Palestinian rights will smear, sue, and even physically threaten people in order to stop conversations about Israel’s human rights violations.”

Krymko says he did not call for the event to be canceled, but was glad it was, and that, while he had not heard about any threats against the church, he does not support threatening the church. He said that the speakers at the planned event—Nerdeen Kiswani, a Palestinian-American activist with the group Within Our Lifetime, and Raja Abdulhaq, the head of Majlis Ash-Shura: Islamic Leadership Council of New York—were supporters of terrorism and the murder of Jews and Israelis.

The comments Krymko objected to, though, were far cries from “jihad,” a word choice seemingly intended to stoke fear of Muslims. In 2017, after a Palestinian rammed his car into a group of Israeli soldiers in a Jewish settlement in occupied East Jerusalem, killing four, Kiswani wrote a Facebook post in which she said that Palestinians celebrating the assault “keep the resistance moving forward,” and that they “remind settlers that there will never be peace on stolen land.” Krymko also criticized Abdulhaq for saying that those who criticize armed resistance to Israel “don’t represent Palestine.” He brought those comments to the church board members, who then decided to cancel the gathering. (The Church of the Redeemer and the pastor of the church did not respond to requests for comment by publication time.)

These are potentially upsetting comments, to be sure, but are part of a longstanding debate among Palestinians about how best to resist a violent military occupation: through unarmed actions or through armed resistance akin to Algeria’s liberation struggle against France.

“That was me being critical of Israel, of Zionism, and of the institutions of Israel, especially the soldiers,” Kiswani said regarding her Facebook post. “They try to claim I’m antisemitic, even though there’s no mention of Jews there [in the post]. We don’t believe in antisemitism. We believe in standing against oppression everywhere.”

Kiswani added: “These same Israeli soldiers commit violence every day. Why is there selective outrage over these deaths on [Krymko’s] end?”

If Krymko was truly concerned about extremism, he picked a strange partner: Dov Hikind, the former New York State Assemblyman who now spends his days traveling around New York to target supporters of Palestinian rights. Hikind posted on his Facebook page about the event, calling on people to protest, and showed up on the night the event was supposed to be held to thank the church for canceling. One person outside the church that night held up a sign reading “Dismantle Gaza for peace.”

In the 1970s, Hikind became a prominent member of the Jewish Defense League, the far-right militant group responsible for a string of bombings and shootings against Soviet and Arab-American targets. He was also an open admirer of Meir Kahane, the Israeli-American rabbi who began the JDL and went on to enter the Israeli Knesset, where he called for the expulsion of Palestinians and Jim Crow-like segregation laws to keep Arabs and Jews separate in schools and beaches.

“I would not be involved in demonstrations against people who were critical of the Israeli government. But this was something very different: this was a pro-BDS event with two speakers who were extremely, extremely radical,” Hikind told me.

Krymko says he has no involvement with the JDL, and “had no idea that [Hikind]’s connected to the JDL.”

As for the DSA, they’re not backing down just because Krymko and Hikind got the church to cancel their event. They plan on holding the same event at a different venue.

“This event must be rescheduled. We must never allow reactionary Zionists to have political victories, especially when it is at our expense,” the Queens DSA Political Education working group wrote in an email. “We must find a new space that cannot be easily bullied.”