Prayer of a Man in Snow

Israel Emiot Translated from the Yiddish by Leah Zazulyer
March 11, 2022 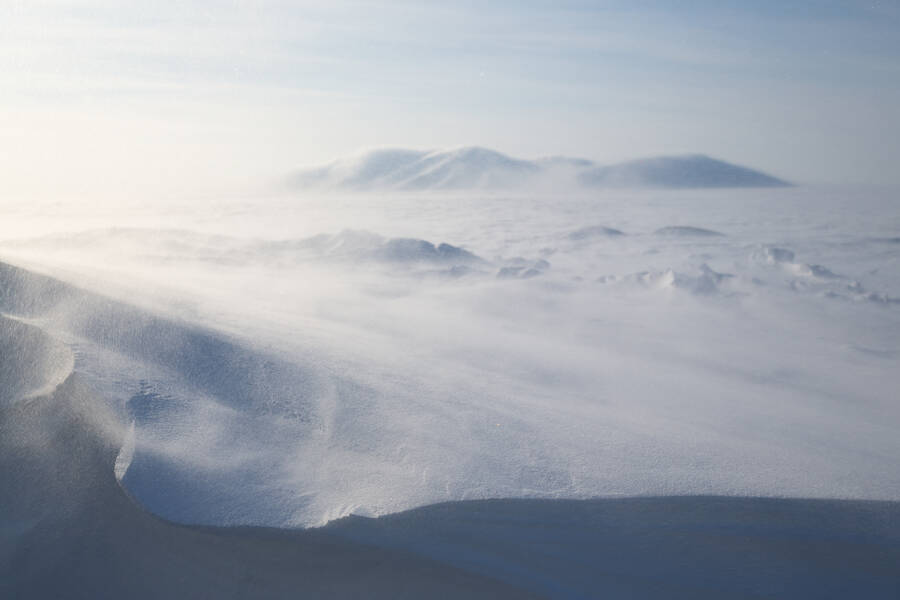 In the preface to his memoir, The Birobidzhan Affair: A Yiddish Writer in Siberia, which recounts the seven years he spent doing hard labor in Siberian work camps during the final years of Stalin’s rule, the Polish-born journalist and poet Israel Emiot requests the reader’s forgiveness. He explains that “while setting down this gruesome record” he made no attempt “at polishing, artistry, or literary embellishment.” Whatever else it is, the horror, Emiot says, is also a problem of style. Like his heart rate when he summons memories of that time, the prose, he feels, is “too rapid.” And yet, throughout the book, beauty encroaches. The prisoners gather to listen to a fellow inmate play the Kol Nidre on his Stradivarius. In one of the less ruthless camps, the men are permitted to enter the village when they’ve finished their work, and the village children follow Emiot around like an uncle. In these moments, the prose lingers on pleasurable sensations as if to make a dwelling space inside the uninhabitable room of his haunted mind. These stylistic shifts are not the contrived optimism of a silver lining that softens—and thus facilitates—the brutal march of terror, but a vital beauty that registers the presence of another world even as the narrowness of its form testifies to the horrors of this one.

Emiot’s poem “Prayer of a Man in Snow,” translated by Leah Zazulyer, inhabits this quality of spacious attention. “Attention,” Simone Weil writes, “taken to its highest degree, is the same thing as prayer.” It requires a wideness of focus antithetical to ego: “I have to deprive all that I call ‘I’ of the light of my attention and turn it on to that which cannot be conceived.” The negation of the poem’s first two lines—“Today there is no bloodstain / on the snow; no one was shot; there’s just snow and snow”—marks both a proximity to and a departure from violence that threatens the self; and with this doubled movement the elsewhere becomes the here, if only inside the three little rooms of Emiot’s stanzas, even as the cruel here of the world, hovering close by, underscores the urgency of this reorientation. Where “Prayer of a Man in Snow” enacts a radical reconfiguration, it does so not through the delusion of flighty transcendence, but instead with a turn to the elements and elemental: “This precious little day counts like a child / up to two: / one–snow / two–snow.” The stunted pedagogy also presents tools for rebuilding the world, beginning with the steady and steadying beat of the heart, the in-and-out rhythm of the breath, more kin to wind than ego.

Listen to Anna Shternshis read Israel Emiot’s "Prayer of a Man in Snow" in the original Yiddish.

(English follows the Yiddish, below.) 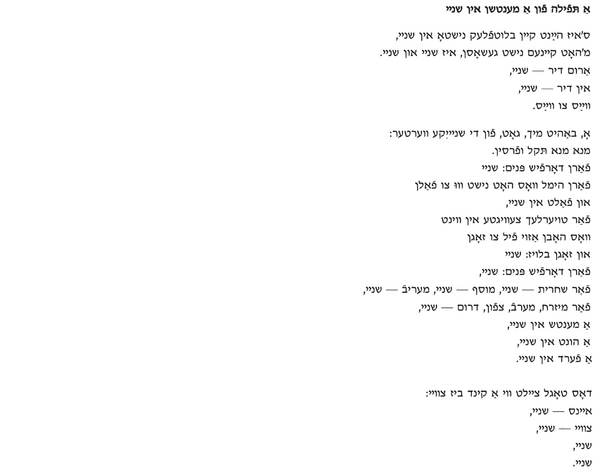 Prayer of a Man in Snow

Today there is no bloodstain on the snow; no one was shot; there’s just snow and snow around you—snow in you snow—white on white. O protect me God from snowy Words: You have been weighed and found wanting. God has numbered thy kingdom and finished it. The face of the village: snow. The sky that has nowhere to fall— and sinks into snow. The little gates swinging in the wind— so much to say and only saying: snow. For the village face—snow; for morning prayers—snow, added prayers—snow, sunset prayers—snow, for east, west, north, south—snow, a man in snow a dog in snow a horse in snow. This precious little day counts like a child up to two: one—snow two—snow, snow, snow.

Israel Emiot (1909-1978) was a Yiddish poet. He published four books of poems in his native Poland before fleeing to Russia to escape the German Reich. There, he served as a correspondent in Birobidzhan before he was arrested and imprisoned for seven years in Siberia. In 1958, Emiot arrived as a refugee to Rochester, New York, where he published several additional books and served as a poet-in-residence at the Jewish Community Center.

Leah Zazulyer lives in Rochester, New York. She has published translations of much of Israel Emiot’s work, as well as her own poetry and prose.