Obama and the Israel Lobby

In his new memoir, the former president subtly reveals how AIPAC stymied his administration. 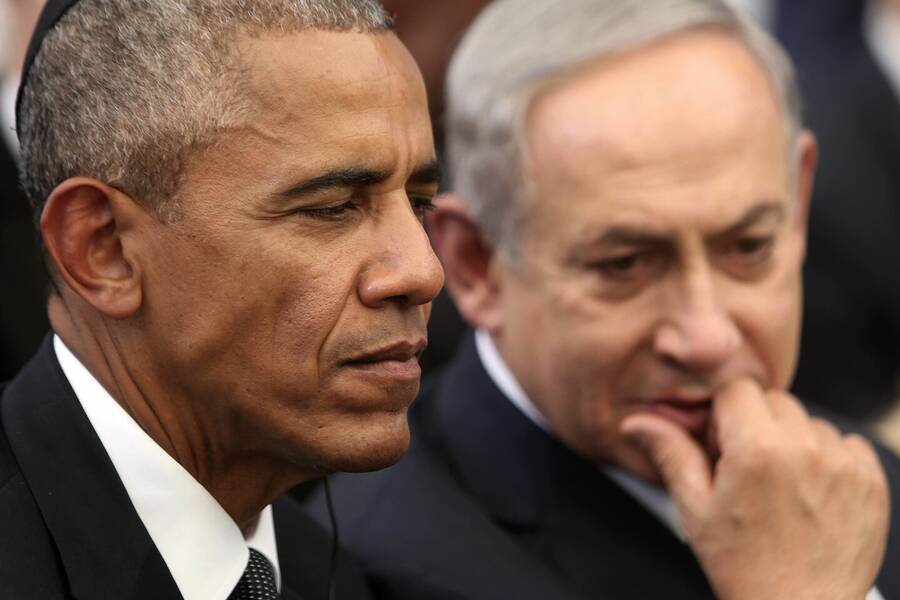 ISRAEL/PALESTINE isn’t an easy subject for Washington autobiographers. Samantha Power’s criticism of the Jewish state became a central issue in her 2013 confirmation hearings to become US ambassador to the United Nations. Yet in the index of Power’s 2019 memoir, The Education of an Idealist, the word “Israel” does not appear. It probably seemed safest to omit the subject altogether.

In his new autobiography, A Promised Land, her former boss, Barack Obama, tries a different tack. He gives the reader enough information to glimpse what Washington policymaking on Israel/Palestine is really like. He details the political realities that constrained his ability to challenge Israel’s occupation of the West Bank, and will likely constrain Joe Biden’s, too. But he doesn’t spell out the implications of his narrative, perhaps because it so closely resembles the argument of one of the most incendiary foreign policy books of the last two decades: Stephen Walt and John Mearsheimer’s The Israel Lobby.

In 2006, Walt, a political scientist at Harvard, and Mearsheimer, a political scientist at the University of Chicago, published an essay—which then became a book—claiming that “the real reason why American politicians are so deferential” to the Israeli government “is the political power of the Israel lobby.” That deference, they argued, “jeopardize[s] U.S. national security.” The book sparked a furious backlash. Abraham Foxman, then the National Director of the Anti-Defamation League, wrote his own book devoted to proving that arguments like Walt and Mearsheimer’s were antisemitic. Harvard and the University of Chicago declared that Walt and Mearsheimer’s “article should not be interpreted or portrayed as reflecting the official position of either institution.”

In certain respects, Walt and Mearsheimer overstated their case. In their essay, they wrote that “Israel and the Lobby” were “critical” to the Bush administration’s decision to invade Iraq, which it was not. Noam Chomsky accused the authors of downplaying the role of corporate interests in setting US policy. Still, Walt and Mearsheimer’s core assertion—that groups like AIPAC make it far harder for US policymakers to challenge Israeli policies that they consider harmful—contains more than a kernel of truth. And if you read Obama’s memoir carefully, it’s clear he agrees.

Obama certainly believes that US support for Israel’s occupation of the West Bank damaged US interests. That support, he writes, “continued to inflame the Arab community and feed anti-American sentiment across the Muslim world.” The bottom line: “the absence of peace between Israel and the Palestinians made America less safe.” As president, Obama tried to change that, but found his efforts stymied, in large measure, by the Israel lobby. Soon after taking office in 2009, he asked Israeli Prime Minister Benjamin Netanyahu to freeze settlement growth. Obama levels criticism at Palestinian leader Mahmoud Abbas, whom he considered overly cautious. But he argues that “[t]here wasn’t much Abbas could give the Israelis that the Israelis couldn’t already take on their own.” So “given the asymmetry in power . . . I thought it was reasonable to ask the stronger party to take a bigger first step in the direction of peace.”

In so doing, Obama picked a fight not only with Netanyahu, but with AIPAC. “Members of both parties worried about crossing the American Israel Public Affairs Committee (AIPAC),” Obama writes. “Those who criticized Israeli policy too loudly risked being tagged as ‘anti-Israel’ (and possibly anti-Semitic) and confronted with a well-funded opponent in the next election.” When Obama proposed the settlement freeze, “[t]he White House phones started ringing off the hook, as members of [his] national security team fielded calls from reporters, leaders of American Jewish organizations, prominent supporters, and members of Congress, all wondering why [they] were picking on Israel . . . this sort of pressure continued for much of 2009.” Obama admits that the pressure took a toll. He writes that the “noise orchestrated by Netanyahu had the intended effect of gobbling up our time, putting us on the defensive.” Picking a fight with Israel, he declares, “exacted a domestic political cost that simply didn’t exist when I dealt with the United Kingdom, Germany, France, Japan, Canada, or any of our other closest allies.”

It’s worth lingering over that last line. Obama doesn’t just describe the pro-Israel infrastructure as powerful. He says that, because of the Israel lobby, it was harder to align US policy toward Israel with the US national interest than it was in the case of any other ally. In describing AIPAC as using its financial muscle to intimidate politicians, he is repeating a charge that helped earn Walt and Mearsheimer (and more recently, Ilhan Omar) the label of antisemites.

After Obama’s fight with AIPAC, Netanyahu agreed to a ten-month, partial settlement freeze, which didn’t include East Jerusalem or buildings where construction was already underway. Abbas—wary of being discredited domestically by lengthy negotiations with a prime minister uninterested in creating a viable Palestinian state—only agreed to direct talks when the ten-month freeze was almost over.

Obama concludes the Israel/Palestine section of his memoir by describing a September 2010 summit meeting aimed at jump-starting those talks. It included Netanyahu and Abbas, as well as Egyptian President Hosni Mubarak and Jordan’s King Abdullah. The atmosphere, Obama writes, was “warm and collegial.” But it was all a charade: “deep down, none of the leaders I’d met with believed anything else was possible.” Obama imagines them leaving the White House like “actors taking off their costumes and makeup backstage, before returning to the world that they knew.” Soon after the meeting, Netanyahu refused to renew the freeze; Abbas broke off negotiations. The summit had been a “pantomime.”

This is Obama as feature writer, stepping back from his role as most-powerful-man-in-the-world to render—and deprecate—his fellow leaders. But it’s unfair. If the Middle Easterners were pantomiming, so was Obama. He depicts himself as an innocent, slightly naïve, bystander in this grim Levantine drama. In reality, Obama was Netanyahu’s patron—his government helped fund Israel’s military and shielded it at the UN. If Obama had deployed the full weight of American power, he could likely have ensured that the summit turned out differently. He could have transformed Israeli behavior. But he chose not to because the domestic political costs were too high. And the domestic political costs were too high, as he acknowledges earlier, because of the Israel lobby.

Obama’s real message can be found in an exchange that isn’t recounted in his book. In 2010, a man at a fundraiser reportedly asked the new president to push for a just solution to the Israeli–Palestinian conflict. Obama responded by recounting Franklin Roosevelt’s answer when the Black labor leader A. Philip Randolph implored him to do more for civil rights. “I agree with everything that you’ve said,” FDR allegedly replied, “But I would ask one thing of you, Mr. Randolph, and that is go out and make me do it.”

In his memoir, Obama implicitly makes the same point: That he can’t change US policy until Americans—through their activism—eliminate the political obstacles that constrain US presidents. To progressive activists, “make me do it” may sound like a politicians’ way of shifting the blame for his own lack of courage. But it’s an accurate depiction of how American politics actually works. Changing government policy toward Israel/Palestine—like changing government policy on climate change or policing—requires grassroots mobilization powerful enough to overcome entrenched interests. The presidency of Joe Biden—a man even less inclined to challenge the Israel lobby than Obama—will expose how much more of that mobilization we still require.