The Senate moderates may weaken Biden’s agenda, but they can’t stop the left’s takeover of the Democratic Party. 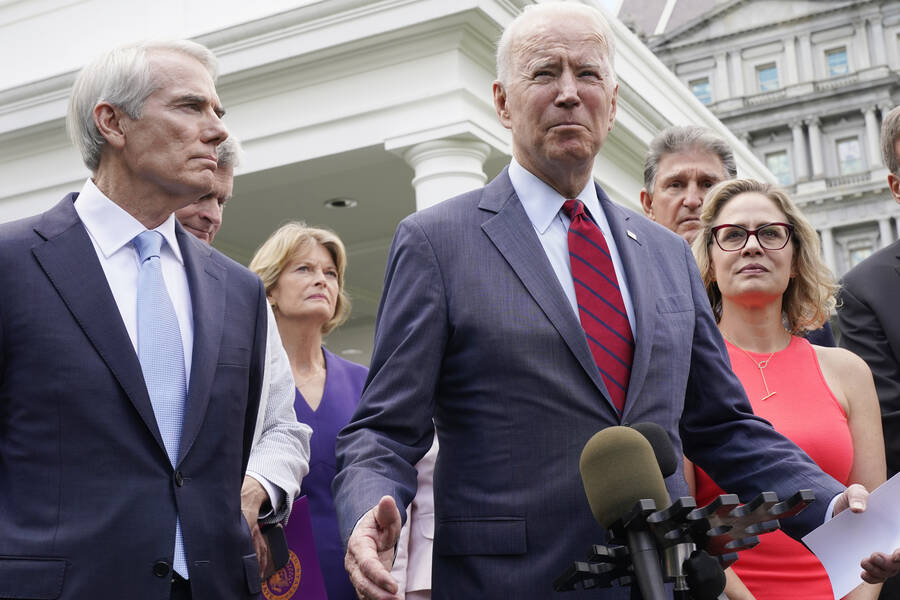 YESTERDAY, Bernie Sanders publicly challenged his colleague Joe Manchin to explain what exactly the West Virginia centrist objects to in the proposed $3.5 trillion reconciliation bill Sanders is attempting to shepherd through the Senate Budget Committee. “I don’t believe that we should turn our society into an entitlement society,” Manchin has said regarding the bill, without clarifying which of the bill’s provisions he considers entitlements. In the evenly divided Senate, Manchin and one other Democrat, Arizona’s Kyrsten Sinema, have been stalling and paring down President Biden’s ambitious agenda, which the rest of the Democratic caucus supports. Though he’s been vague as to his specific objections, Manchin’s political logic is at least somewhat comprehensible: As a Democrat representing a state Donald Trump won handily twice, he can argue that Democrats are lucky to have his seat at all and that he has to maintain his standing with conservative voters. Sinema—a former Green Party supporter from a state Joe Biden narrowly won, that has been trending blue, and that has a second Democratic senator who isn’t causing any problems for the White House—is much more mystifying. Since she has made herself totally unavailable to constituents, including those who have resorted to accosting her on an airplane and in a public restroom, her true motivation is anyone’s guess. Saturday Night Live’s Cecily Strong suggests that the answer is “chaos”; an equally plausible scenario is that she has no expectation of a second term and is simply auditioning for a future as a corporate lobbyist.

On the surface, this whole situation is dismaying for progressives of all stripes (while conservatives like Bret Stephens are getting exactly what they want). As Sanders noted yesterday, the bill Manchin and Sinema are obstructing is one that would, among many other things, permanently reduce child poverty in the United States by entrenching emergency measures in response to the pandemic. Beyond the immediate life-and-death policy stakes, Biden’s approval has plummeted in recent months, and both the Democrats’ narrow control of Congress and Biden’s eventual reelection may depend on his ability to deliver the meaningful economic benefits that he campaigned on. In other words, by sabotaging Biden’s domestic agenda, Manchin and Sinema are also increasing the risk that a Republican Party openly hostile to democracy and the rule of law will soon return to power. For some on the left, the fact that two senators can arbitrarily hijack this process is grounds for questioning the point of engaging with electoral politics.

But on another level, the recent events on Capitol Hill can be read as a vindication of the past several years of left-wing electoral organizing. It’s easy to lose sight of this when Manchin and Sinema are sucking up so much attention, but the sitting president—one long identified as a pro-corporate centrist—is currently in lockstep with Sanders. So are Chuck Schumer and Nancy Pelosi, and so are the overwhelming majority of congressional Democrats. Operating with much larger majorities in both houses during the first two years of his presidency, Barack Obama also had to deal with much more dissent from the moderate wings of the Democratic Party, and as a result felt he had to champion far less ambitious legislation than the Biden administration is now pursuing. Through a combination of factors—including the pandemic, the radicalizing effects of the Trump years, and the emergence of a generation of progressive voters who supported Sanders by overwhelming margins in two presidential primaries—the Democratic Party as a whole has swung dramatically to the left since the Obama years. Self-described democratic socialists like Sanders and Rep. Alexandria Ocasio-Cortez are now mainstays of cable news, which would have been unthinkable just two years ago—an indicator that they now effectively speak for the party in power.

I’m not trying to be pollyannaish; having more left-wing politicians on TV is not a replacement for actually passing legislation that offers real material benefits to working people. And as Alex Kane has documented for Jewish Currents, both Sanders and AOC have made compromises, including on Israel/Palestine, that some of their core supporters regard as betrayals—no doubt in part due to the increased media scrutiny that comes with being allies and surrogates to a sitting administration. Moreover, if Biden’s presidency is ultimately a failure and Republicans return to power, perhaps even in the form of a Trump restoration, the consequences for the left’s policy priorities will be dire.

Still, it’s worth acknowledging that the moderate wing of the party represented by nihilists like Sinema, even if it currently holds the balance of power in Congress, is rapidly losing its constituency and its (undeserved) reputation for sensible pragmatism. As New York Magazine’s reliably centrist politics writer Jonathan Chait has repeatedly argued, it’s now the moderates who are holding back the Democrats, not the left, which in the past writers like Chait have often blamed for being inflexible. In the event that Democrats do lose ground in next year’s midterms, it’s the moderate wing that will suffer those losses. In that event, it will be incumbent on the left to remind everyone that moderates were victims of their own senseless obstructionism, while the left were loyal foot soldiers for Biden’s agenda. It’s an encouraging sign that this narrative is already starting to feel mainstream, in spite of certain maddening New York Times headlines that try to blame the left as if it’s still 2009. No matter what happens to Biden’s agenda, the center of American politics is not holding.

Newsletter
We’re Still Living Through the Aftermath of January 6th
The Capitol Riot was an extreme manifestation of the right’s decades-long efforts to subvert democracy.
David Klion
Newsletter
The Origins of the Ukraine Crisis
A guide for the perplexed
David Klion
Sign up for our email newsletter, featuring exclusive original content