Jews of Color and the Policing of White Space

The infamous 911 call in Central Park has hard lessons for Jewish communal spaces. 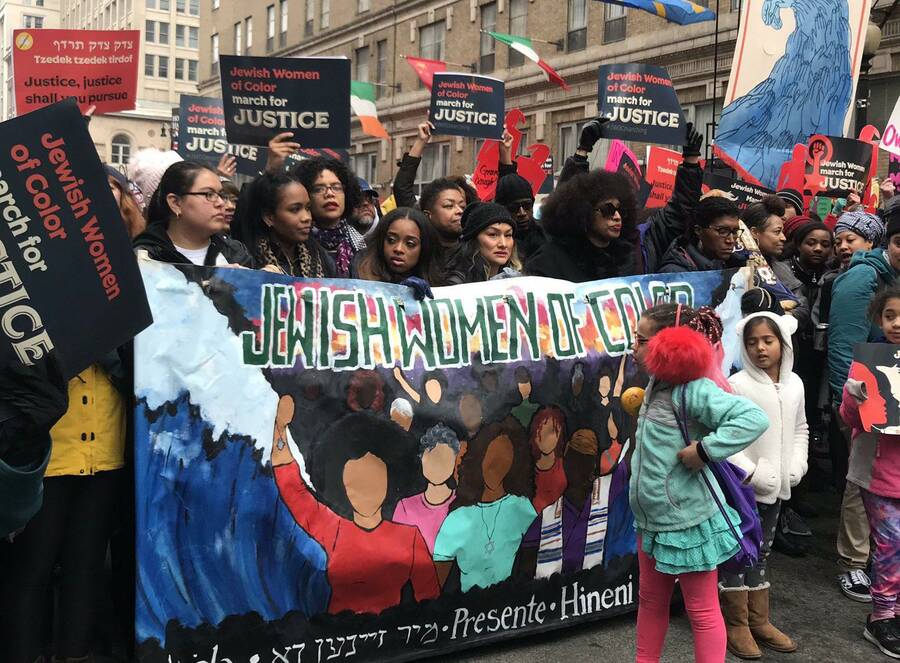 "I’M TAKING A PICTURE AND CALLING THE COPS . . . I’m gonna tell them there is an African American man threatening my life." These words became notorious this past Monday after investment manager Amy Cooper was filmed filing a false police report against Black birdwatcher Christian Cooper (no relation) following a minor dispute over her unleashed dog in New York’s Central Park. The video quickly went viral, and public outcry was swift, with Cooper losing her job. But the systemic state racism and violence that she knowingly tried to invoke goes on unabated, with the death of George Floyd at the hands of Minneapolis police, also on Monday, underscoring the severity of Cooper’s threat.

The video has also provoked discussions of how such “BBQ Becky” incidents are meant to enforce “the white space,” a term coined by Black sociologist Elijah Anderson that reflects the segregationist legacy of public places in the United States where white dominance is assumed. Anderson characterizes the white space as a space in which Black presence is presumed to be alien or threatening. “When the anonymous black person enters the white space,” Anderson writes, “others there immediately try to make sense of him or her—to figure out ‘who that is,’ or to gain a sense of the nature of the person’s business and whether they need to be concerned.”

But as the Central Park incident illustrates, a Black person entering the white space can have far more dangerous consequences than simply piquing white curiosity. Because the bounds of this space have been created to enforce white supremacy, a Black person’s presence within it is interpreted not only as an aberration, but as a violation of the country’s racial power structure. In Essence, Black Jewish writer Nylah Burton wrote that Amy Cooper’s threatening of Christian Cooper reveals that she “was infuriated by the idea that Christian Cooper felt he had an equal right to the public, outdoor space.”

While to many these racialized questions of who “belongs” in certain spaces might seem far removed from Jewish communal life, they are defining concerns for Jews of color, who are constantly forced to affirm, as Tiffany Haddish put it in her Black Mitzvah stand-up special: “Yes, muthafucka, I’m supposed to be here.” Discussions of who is and who is not assumed to belong in Jewish communities have taken center stage in the Jewish community in recent weeks, after eJewish Philanthropy published an article by two Jewish demographers disputing recent studies counting Jews of color at 12–15% of the overall US Jewish population, arguing that the number is likely half that. As Mairav Zonszein reported for Jewish Currents earlier this week, the article was met with an outcry from many Jewish organizers of color, who criticized it as methodologically flawed and a form of demographic erasure, prompting condemnations from Jewish demographers and even the Union of Reform Judaism. The controversy centered on the failure of many studies of Jewish life to even ask questions about race when polling Jews, with Stanford Jewish studies professor Ari Y. Kelman arguing that “those responsible for creating the surveys are deciding in advance that racial and ethnic identities do not matter, and, by extension, neither do people who hold those identities . . . It perpetuates a set of biases and prejudices shared by some American Jewish communal leaders that systematically sustains a sense of normative whiteness and even privilege among American Jews.”

Jews of color encounter this systemic “sense of normative whiteness” on a regular basis in the everyday experience of having our Jewish identity questioned. From casual comments about not “looking Jewish,” to being racially profiled by synagogue security, to being stopped for carrying a Torah in the street by a mob, most Jews of color have at least one story like this, sometimes many. These experiences stem from the ubiquitous assumption that only white people belong in Jewish spaces—that is, that American Jewish spaces are in fact part of the greater American “white space.”

Addressing the impact of the white space on the Black people who must navigate it, Anderson writes, “When present in the white space, blacks reflexively note the proportion of whites to blacks . . . when judging a setting as too white, they can feel uneasy and consider it to be informally ‘off limits.’” So what happens when the place that feels “off limits” is your own religious community? In a context in which the presumption of Jewish whiteness impacts everything from Jewish demographic counts to institutional funding, many Jews of color are caught between fighting for a place in white-dominated Jewish communal spaces and trying to build our own.

This is part of why the argument over demographics feels like an existential struggle to many Jews of color. In a piece published in Hey Alma just yesterday, Black Jewish racial justice educator Shahanna McKinney-Baldon, who helped coin the term “Jews of color,” wrote that its very creation was a vital act of self-definition, designed to confront the interconnection between Jewish communal assumptions of normative whiteness and American racism. “It was a nod to the idea that we simply cannot totally disentangle the Eurocentrism in our U.S. Jewish communities from the Eurocentrism in the wider world,” McKinney-Baldon wrote.

Even as some white Jews struggle with their relationship to whiteness in an era of resurgent antisemitic white nationalism, the systemic white supremacy of the US permeates our Jewish communities. For example, discussions of synagogue security after white nationalist murders like the Tree of Life shooting are complicated by the fact that the same police forces that many Jewish communities would call in for protection are state enforcers of the white space that do not represent safety for Jews of color. In many cases, Jews of color who point to these contradictions are met with hostility, silencing, and even the erasure of their Jewish identities. As a result, the policing of Jewish identity becomes not only a site of de facto exclusion, but—like in the Central Park case—a tool for active gatekeeping and discrimination.

In an extension of this same dynamic, Jews of color who are politicians, activists, and writers on the left often face vicious forms of intensive scrutiny in the public eye that signals their unwelcomeness in Jewish life. In 2018, Colombian-American New York state senator Julia Salazar, who ran a successful left-wing democratic primary campaign rooted in activism with Jews for Racial and Economic Justice (JFREJ), faced public questioning of her Jewishness, with one Tablet writer positing that in even claiming a Jewish identity, Salazar was participating in a broader far-left plot to dispossess white Jews of their identities. I myself experienced this last year when a Times of Israel blogger, who had spent months harassing Black Jewish Forward writers across the political spectrum, was granted a platform not only to question my Jewish roots, but to claim I had invented them as part of a conspiracy by far-left and pro-Palestinian organizations that she labeled “Jewface.” The same article also targeted both Salazar and Burton (whose work primarily covers race and not Israel/Palestine politics).

The point of these attacks was to silence and discredit Jews of color who are pushing conversations on race and Israel past the point of comfort for some of our white peers, presenting our voices as extreme while using our racial otherness as a means of exclusion. It's a strategy that relies on the idea that whiteness is the default American Jewish identity.

We are living in a pivotal moment, in which the mask of civility has slipped off to reveal the brutal face of US white supremacy: just last night, President Trump openly called for military intervention in Minneapolis and the shooting of anti-police brutality protesters, whom he labeled “THUGS.” As in the days of the Civil Rights Movement, American Jews have much to offer the struggle for racial justice, but this work must start from within. Racism in the American Jewish community cannot be separated from American racism more broadly; they have to be fought together.

In order for this to happen, American Jewish communities must actively work to dismantle the barriers that the white space creates for Jews of color seeking to engage in Jewish communal life. At a basic level, this means allowing Jews of color to speak for ourselves, listening to our voices, and including us in your assumptions of what a Jew looks like. It means moving from a place of communal ambivalence and questioning to an active embrace not only of our identities, but also of the way that we complicate narratives about Jewishness and race that are built on white supremacy. It means sitting with the hard questions we raise without disputing our right to raise them. Finally, it means accountability and teshuva, not just for individual harm, but for the systematic ways that Jews of color have been and continue to be excluded institutionally and communally. Jews of color have been figuratively knocking at the doors of the American Jewish community for decades; it’s time to admit that we were supposed to be here all along.