Jewish Communities Must Root Out Islamophobia

After New Zealand, we need to challenge all institutions that fund anti-Muslim bigotry. 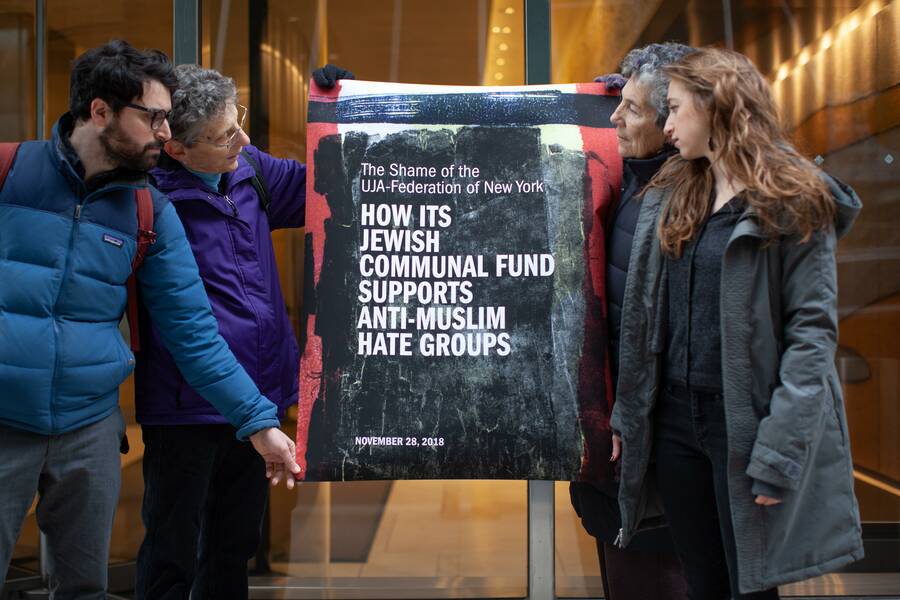 MANY JEWISH GROUPS in the US have reached out to Muslim groups after last week’s massacre of Muslim worshippers in Christchurch, New Zealand. Jewish communities have been showing support and solidarity in a number of meaningful ways, including participating in interfaith services and rallies, offering to stand outside mosques when needed, and raising funds for the families of those who were murdered. But as Jews, we need to dig deeper into what our institutions are doing to foment Islamophobia and anti-Muslim racism.

The hateful anti-Muslim rhetoric all around us can’t be separated from acts of physical violence. White nationalist rhetoric and actions have been encouraged and facilitated by the Trump Administration; the recent, relentless assault on Rep. Ilhan Omar has been riddled with Islamophobia and anti-Black racism. This Islamophobia long predates the current administration and has been encouraged and condoned well beyond the right. A recent article for ThinkProgress by Dr. Maha Hilal captures the hypocrisy of those in power: “While leaders across the globe might react negatively to the white nationalist language [the New Zealand killer] used, it’s hard to believe rhetoric that mourns the loss of Muslim lives after more than 17 years of the war on terror and the violence against Muslims in the form of detention, surveillance, torture, and murder.”

Anti-Muslim racism is pervasive. It is state-sanctioned and structural. It is deadly. It is on our streets, in our media, and in the encounters Muslims have at work, in schools, and in day-to-day life. So what can we do as Jews? We need to challenge our Jewish communities that are enabling—and sometimes fomenting—Islamophobia.

We know that Jewish organizations are funding some of the most virulent Islamophobic groups in the country. For example, progressive Jewish groups including Jews Against Anti-Muslim Racism (JAAMR), Jews SAY NO!, and Jewish Voice for Peace (JVP) recently released a report detailing how the Jewish Communal Fund (JCF) in New York is supporting some of the worst purveyors of anti-Muslim hate. These purveyors include, among others, the David Horowitz Freedom Center, whose namesake is described by the Southern Poverty Law Center as “the godfather of the anti-Muslim movement,” and the American Freedom Defense Initiative, whose public face is Pamela Geller, infamous for placing vitriolic anti-Muslim ads in public buses and subways. All of these JCF-funded groups are leaders in, or significant contributors to, what the Center for American Progress calls “the Islamophobia network in America.” The JCF has responded to the report and call to stop funding anti-Muslim hate with dead silence.

Chicago’s Jewish United Fund (JUF) has been doing much the same. JUF funneled hundreds of thousands of dollars to anti-Muslim hate groups between 2011 and 2014 through its donor-advised funds. JUF also accepted $5.1 million in 2013 from the Donors Capital Fund, a major contributor to the Islamophobia network. After sustained pressure and private meetings with Jewish activists and community leaders, JUF leadership said they would “discourage” its funds from selecting known hate groups for donations, yet their response makes clear they are continuing to shirk responsibility for how their funds are used.

And then there’s the Anti-Defamation League, which bills itself as committed to combating all forms of hate. While the ADL has certainly done some work to challenge Islamophobia, it has done a great deal of harm in promoting it. The organization has engaged in illegal spying, beginning in the 1950s, on Arab-Americans and progressive groups, which is perhaps why it never spoke up in all the years when the NYPD engaged in discriminatory surveillance of Muslim communities. Far from denouncing this blatant attack on the civil rights of Muslim citizens, the ADL gave an award to the commanding officer of the NYPD Intelligence Division that had been implementing the surveillance program. The ADL has a long history of labeling Muslim community groups as “terrorist sympathizers,” doing whatever it can to delegitimize them, and The ADL Foundation has also given grants to the Investigative Project on Terrorism, founded by Steve Emerson, known as a “leading light of the Islamophobia network.”

Jewish organizations have participated in furthering Islamophobia as part and parcel of their uncritical support for Israel. The anti-Muslim “clash of civilizations” concept—that “Western civilization” is locked in a never-ending battle with Islam as a result of fundamental cultural differences, rather than material factors such as the legacy of neocolonialism and imperialism—serves as a framework for US and Israeli government policies. Other hasbara (propaganda) campaigns disparage Muslims and Islam to justify Israeli policies that dehumanize Palestinians.

Many Jewish organizations have also supported the US “war on terror,” which, since 9/11, has targeted and demonized Muslim, Arab, and South Asian communities across the globe. This domestic and global “war on terror” is considered integral to cementing the US-Israel “special relationship” and ensuring US support for Israeli policies.

We are in a moment in which our actions deserve real scrutiny and a commitment to change. Support for Islamophobia—in any form—kills.

Donna Nevel, a community psychologist and educator, is co-founder, with Elly Bulkin, of Jews Against Anti-Muslim Racism (JAAMR).

Essay
Melanie Kaye/Kantrowitz, 1945 – 2018
Remembering one of American Jewry’s most inspiring activists and writers.
Esther Kaplan, Marilyn Kleinberg Neimark, Donna Nevel, and Alisa Solomon
Sign up for our email newsletter, featuring exclusive original content
Short on time?
Sign up for our weekly Monday roundup of everything you missed in Jewish Currents last week.