Remembering one of American Jewry’s most inspiring activists and writers. 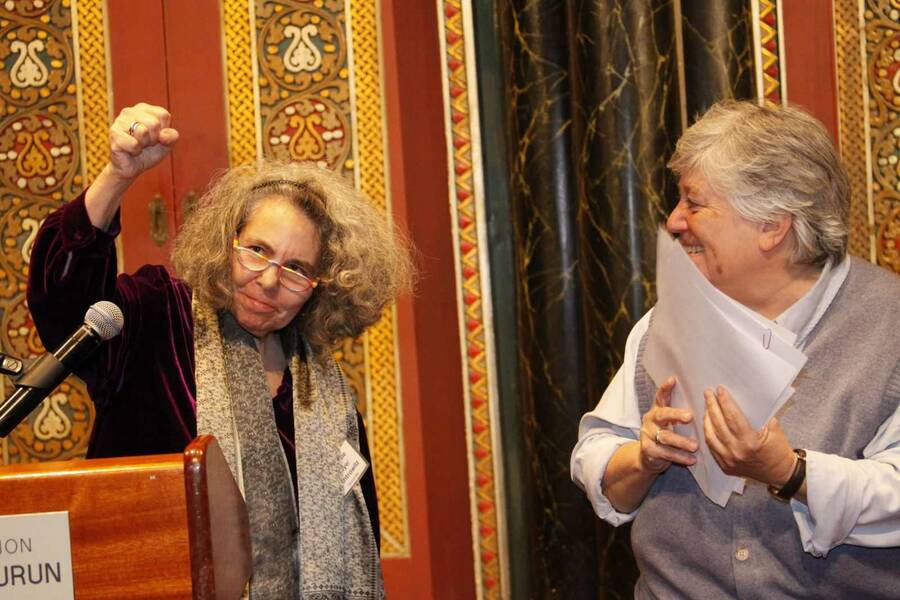 As an eloquent and incisive poet and essayist, she, better than any of us, would have known how to write about the sting of such an immense loss and, with the rousing impact of her passionate words and deeds, how to galvanize us for the battles ahead. Melanie served as a guiding light for other writers and activists, shaping Jewish and feminist political thinking and social movements over the course of decades.

As a teenager, Melanie participated in the civil rights work of the Harlem Education Project. Writing of her first experience of the power of collective action, Melanie said, “I was hooked.” Later, at City College in the 1960s, and then at graduate school in California (she earned a PhD in Comparative Literature at Berkeley), she joined the emerging feminist and lesbian liberation movements. Her organizing work against domestic violence in Portland, Oregon in the 1970s was among the first in the country. She served on the steering committee of New Jewish Agenda, the national, multi-issue grassroots group that was active from 1980 to 1992, and co-chaired its Task Force on Anti-Semitism and Racism. In addition, she was part of multiple campaigns for Palestinian rights.

Melanie’s pioneering writing and teaching developed alongside her activism. At Berkeley, she taught the first Women’s Studies course and she went on to teach in programs as diverse as Urban Studies, Race Theory, Public Policy, Gender and Queer Studies, and Jewish Studies. For five years she directed the Queens College-CUNY Center for Worker Education, which served mostly adult women of color. She taught in the Bard College Prison Initiative. She was an attentive, nurturing mentor to students and emerging activists of all ages, and deeply respectful of the distinct wisdom of the young. Reflexively generous, she wrote encouraging notes to young writers; even when Parkinson’s was taking its toll, she looked out for the labor rights of her caregivers.

Today’s #JewishResistance activism owes much to her writing, organizing, and example. And certainly, Jews for Racial and Economic Justice would not be what it is today if it had not been for Melanie. As JFREJ’s founding director, Melanie pushed JFREJ to become a membership organization. She also, critically, centered the organization’s work in a deeply feminist, queer, anti-racist, multicultural, class-conscious analysis. The word “intersectionality” did not yet have wide currency, but Melanie communicated the concept and put it into action. She urged us to grapple with the connections between racism, antisemitism, misogyny, homophobia, classism, and other oppressions; she insisted on contending with the contradictions and conflicts at the heart of movement-building. A public intellectual in the best sense, she combined sparkling ideas, emotional sensitivity, and moral courage—a steely fierceness embedded in a quiet, unassuming style. At the same time, her deep humility allowed her to shoulder even the most tedious tasks required for building an organization, and a community, by hand.

JFREJ was a dream job for Melanie, a place where her formidable radical commitments, her embrace of both bread and roses, and her intense Jewish identification could find full and fruitful expression. She left a position as a tenured professor in Vermont to take the barely compensated job. And her move to New York produced something else beshert: her extraordinary partnership of 21 years with the organizer Leslie Cagan, with whom she shared deep ethical commitments, a lifelong devotion to the movement, and a wicked sense of humor. Fittingly, they met for their first date at the Dyke March.

History mattered to Melanie as an activist principle. Aware that reckoning unromantically with and finding inspiration in the past could help shape new, radical visions for the future, she convened conferences on radical Jewish history and created a workshop on confronting white privilege and antisemitism. When a controversial New York City professor vociferously claimed that Jews had been responsible for the Atlantic slave trade, sparking predictable outrage, Melanie responded differently: she organized a public JFREJ forum that brought together historians, scholars, and activists to reckon honestly with Jewish involvement in both slavery and in the abolition movement. She took back “Kantrowitz,” the family name her father had discarded for “Kaye,” but rather than hide his assimilationist act, kept “Kaye” in front of that forward slash, signaling that the closet was part of her Jewish American history, too.

Melanie also had a profound impact on untold numbers who encountered her ideas through her writing, editing, and public talks. With The Tribe of Dina: A Jewish Women’s Anthology (1989), which she co-edited with Irena Klepfisz, Melanie helped ignite a diverse, complex radical Jewish feminism for the late 20th century. Her short story collection, My Jewish Face & Other Stories (1990), offered a moving, humorous, deeply human portal to the urgent struggles of the 1980s. Her most recent book, The Colors of Jews (2007), presciently historicized and decentered Jewish whiteness. These writings and others invigorated and challenged generations of activists, writers, and radical thought.

Melanie calls out to us still, in an essay from her ferocious 1992 book The Issue is Power: “We are up against one of the most powerful, impenetrable machines of human history, our government,” she writes. “I am talking, ultimately, not only about preserving women’s choice, or fighting hate, or even about peace between Israel and Palestine, but about massive transformation of society [...] The old activists of my childhood who were my models—now I become them.”

A memorial service, open to the public, will be held on September 15, 2018, in New York City. Details at melaniekayekantrowitz.com.

Alisa Solomon is the author of Wonder of Wonders: A Cultural History of Fiddler on the Roof, and of Re-Dressing the Canon: Essays on Theater and Gender and a professor at the Columbia School of Journalism.