The latest victims of the occupation include a US citizen and a revered nonviolent activist. 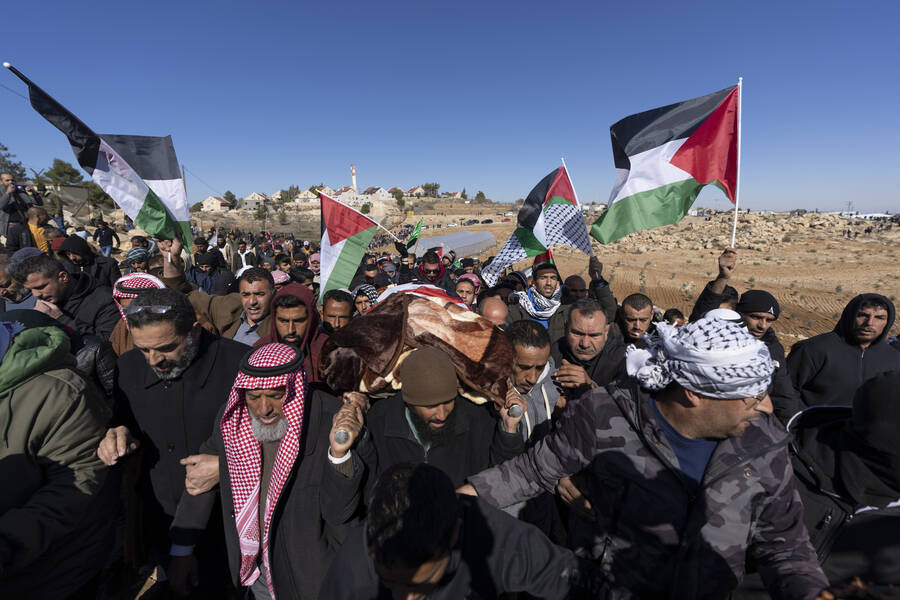 ON JANUARY 5TH, Haj (Abu Adel) Suleiman al-Hathaleen, an elderly resident of the tiny Palestinian village of Um El-Khair in Area C of the West Bank, was hit by an Israeli police vehicle operated by a civilian subcontractor. Suleiman had been attempting to physically stop the police from impounding unregistered vehicles when the vehicle veered off the road, ran over his body, and dragged him a few dozen feet before fleeing the scene. According to Suleiman’s relative, Awdeh Halthaleen, the incident fractured Suleiman’s skull, neck, chest, ribs, and pelvis. On January 17th, twelve days after the incident, he passed away in Al-Mizan hospital in Hebron. Thousands of Palestinians from around the West Bank flocked to his funeral soon after. The Israeli police responded with a formal statement that described “violent disturbances by rioters who are local residents” and made no mention of anyone being run over.

Suleiman is the second elderly Palestinian to die at the hands of Israeli forces in the span of two weeks. Last week, Omar Abdalmajeed As’ad, an 80-year-old Palestinian man with US citizenship, was stopped at a checkpoint on the way home to the village of Jiljilya from visiting his family. He was arrested, removed from his vehicle, and left—in freezing temperatures—at an abandoned construction site. He died overnight.

As’ad’s US citizenship meant that the story of his death reached American mainstream news outlets—and the Twitter feeds of Reps. Rashida Tlaib and Mariane Newman who called on the State Department to investigate, while Rep. Betty McCollum called As’ad “another victim of this cruel occupation.” State Department spokesman Ned Price said that US officials had requested “clarification” from Israel of the events surrounding As’ad’s death and that “the Israeli Defense Forces have indicated that there’s an ongoing investigation.”

Suleiman was not a US citizen, so his death garnered far less attention in the United States than As’ad’s. Yet among the villagers of Um El-Khair, the surrounding area of Musafar Yatta, and within activist circles in Tel Aviv and Jerusalem, his death came as a major blow. An iconic activist, Suleiman was well known in the remote southern corner of the West Bank for his willingness to engage in civil disobedience. According to Gideon Levy and Alex Levac, writing for Haaretz, there was “virtually no demolition, confiscation, operation or arrest in recent times that he did not try and prevent physically.” He had been in custody a dozen times, and he always eschewed violence. Video footage of a typical protest shows him in his long, flowing white headscarf, carrying a shepherd’s cane and waving a Palestinian flag, berating soldiers, and walking directly in front of bulldozers in one of the dozen or so Palestinian villages that dot the southern West Bank.

Oriel Eisner of the Center for Jewish Nonviolence told Jewish Currents that thousands of activists—including both Israeli and diaspora Jews—were touched by Haj Suleiman “either directly or because of the culture of welcoming partnership he has cultivated in his village and amongst the generation of Palestinian activists he has inspired.” He added, “if you join in shared resistance work in the South Hebron Hills, you pass through Um El-Khair.”

Suleiman’s life story, and the story of his village, are synecdoches for the story of Palestine. Suleiman is the descendant of Bedouin who fled their homes in what is now the Israeli city of Arad during Israel’s 1948 War of Independence—what Palestinians call the Nakba, or catastrophe. His family arrived in the South Hebron Hills and purchased a plot of land during the ensuing years. For a number of decades, they lived just as they had before the Nakba—dry farming and building shanties and tents alongside pens for their livestock. Suleiman married two women, and would eventually have three daughters and seven sons.

But in 1980, more than half the villagers’ land was seized by the Israeli military—a seizure subsequently recognized by Israel’s High Court as legitimate on the basis of “military needs.” By 1983, the Israeli government declared the seized property “state land” and transferred it to a quasi-state body: the Settlement Division of the World Zionist Organization. The Division quickly established a permanent settlement on what had been Um El-Khair’s land and called it Carmel.

Carmel, which is separated from Um El-Khair by a long barbed-wire fence, looks not unlike an American suburb. Its roads are paved, its homes air-conditioned, and its chicken coop (located on the other side of Um El-Khair) is connected to power. In a statement to Jewish Currents, Dror Sadot—a spokesperson for the Israeli human rights group B’Tselem—noted that “while the residents of Um El-Khair are not connected to electricity and water, and exposed to repeated demolitions of their homes, just next to them Israel built the settlement Carmel, in which Jewish residents are connected to infrastructure and where construction never stops.”

In the wake of the Oslo Accords in the early 1990s, Um El-Khair was designated as part of Area C of the West Bank, which puts it entirely under the authority of the Israeli military’s Civil Administration arm, giving Palestinian residents very little autonomy. In Um El-Khair, it is next to impossible to obtain building permits (in 2020, the Civil Administration approved just 1.4% of permits in Area C), so residents build illegally and the army periodically demolishes what they build. More than 65 demolitions have been carried out in Um El-Khair, and there are 100 or so outstanding demolition orders. Sadot told Jewish Currents that Um El-Khair is a place where “apartheid is seen from every corner.”

The occupation notwithstanding, Suleiman worked as a manual laborer until the Second Intifada in 2000, when Israel instituted a policy preventing West Bank Palestinian workers from entering settlements. It marked the moment that Suleiman turned to nonviolent activism. He spent the next 20 years becoming a mainstay of anti-occupation activism.

For Tariq Hathaleen, a Palestinian activist in Um El-Khair whose father passed away when he was young, Suleiman (who was his biological uncle) was an adoptive father. “He is the one that taught me mostly everything in life,” he told Jewish Currents via a WhatsApp voice message. “He taught me how to love, how to respect, how to be humble, everything. Literally everything.” Hathaleen said that losing Suleiman was the hardest thing he’s ever experienced. “Demolishing homes, settler attacks, police violence, occupation violence, settler violence…[all of that] is much easier than these moments. Um El-Khair is broken now…I can see that in the eyes of his children; of my brothers, his nephews; in the eyes of my aunts; in the eyes of his friends. We are all broken, we are heartbroken, we are back-broken.”

Hathaleen said that what he wants now is “justice” for Haj Suleiman, and to “hold accountable the people who are responsible.” But when you live in Area C of the West Bank, it’s really hard to do that.

Newsletter
Biden’s Education Department Delays Defining Campus Antisemitism
To the relief of Palestinian-rights advocates, the department’s Office for Civil Rights did not adopt the controversial IHRA definition of antisemitism this past December.
Alex Kane
Newsletter
The State of Antisemitism Reporting
How America’s major newspapers have stumbled in covering a serious phenomenon
Mari Cohen