How the Seattle Jewish Federation Blocked a Donation to B’Tselem

Donor-advised funds have legal discretion to deny gifts to groups that criticize Israel. 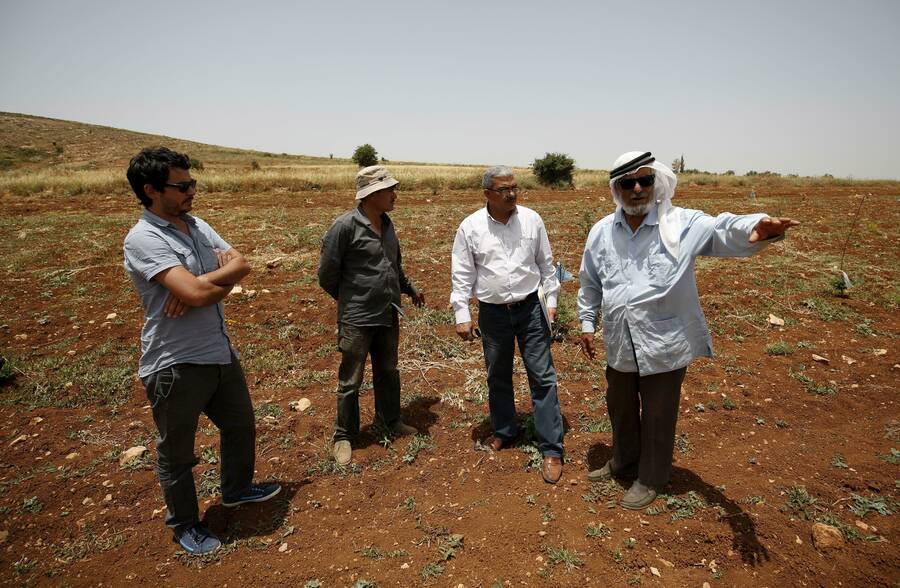 Iyad Hadad (second from right), a field researcher from B'Tselem, listens to testimony from a Palestinian farmer who said his land was damaged in an attack by Israeli settlers in the West Bank village of Turmus Aya, June 8th, 2015.

ON JULY 26TH, 2021, Alan Sussman did what he does every year: He asked the Jewish Federation of Greater Seattle, which manages his family’s donor-advised fund, to send grants to nonprofit groups of his choosing. The 78-year-old civil liberties lawyer wanted to donate to six organizations that do work involving Israel/Palestine: T’ruah, Rabbis for Human Rights, Breaking the Silence, +972 Magazine, B’Tselem, and, full disclosure, Jewish Currents. The Jewish Federation agreed to his funding requests, with one exception: They denied Sussman’s request to donate $1,000 to B’Tselem, the leading Israeli human rights group.

In November, the Federation told Sussman it would not distribute his family funds to B’Tselem because, in January 2021, the human rights group declared that Israel operates an apartheid regime based on Jewish supremacy. (In response to a request for comment from Jewish Currents, a Federation spokeswoman, Tovah Bigeleisen, said, “we have nothing to add.”.) Sussman had confronted a similar issue in 2019, when his request to send money to the anti-occupation group IfNotNow was rejected because, according to the Federation, the group violates its policy of only funding organizations that build a “cohesive Jewish community.” Similarly, in 2016, the Jewish Community Foundation of LA denied a donor’s request to send money to IfNotNow. (Meanwhile, it’s unclear if similar red lines exist on the right: left-wing activists have targeted other Jewish donor-advised funds for funding anti-Muslim organizations, while journalists have documented such funds giving money to Jewish settlements in the occupied West Bank.)

The Federation was within its rights to deny Sussman’s request: a donor-advised fund gives the donor an immediate tax break for allowing the Federation to manage the funds (for which it receives a management fee) and to invest them where it sees fit. Sussman can inform the Federation where he wants charitable donations to go, but it doesn’t have to listen.

“These funds have been sold to donors as if they are really mini private foundations, but they belong to the public charity they exist under. When things like this happen, it feels like it’s overstepping or it’s a rude violation, but it’s absolutely within [the fund’s] legal right,” said Lila Corwin Berman, a history professor at Temple University and the author of The American Jewish Philanthropic Complex: The History of a Multibillion Dollar Institution.

But Sussman says the denial is an example of why Jews critical of Israel’s human rights abuses are being driven away from the mainstream Jewish community, and constitutes an attempt to run away from the reality of Israeli policy by claiming that words like “apartheid” are beyond the pale. “I’m not asking the Federation to debate apartheid,” Sussman told Jewish Currents. “I’m only asking them not to defund the organizations that want to.”

Sussman used the opportunity presented by the rejection of funds to ask the Seattle Jewish Federation for a list of all the organizations for which it has either approved or denied funding. He told the Jewish group he wanted the information in order to ascertain how such decisions are made. “I’d like to inform myself about whether they’re making political judgments, rather than philanthropic judgements,” Sussman said. The Federation denied that request too, instead directing Sussman to look at the forms the group files with the IRS, which do not show grants under $5,000.

The Federation has approved donations to B’Tselem in the past: In fact, in 2019, the Federation approved Sussman’s grant request to the organization. But since B’Tselem’s apartheid report, it has been deemed to be in violation of the Federation’s partnership guidelines, which include provisions saying that the organization won’t partner with groups that “promote the illegitimacy of Israel as a secure, independent, democratic, and Jewish state.” The Federation was particularly troubled by B’Tselem’s language that Israel operates a regime based on “Jewish supremacy”; in a memo prepared by Federation staff on Sussman’s request that he shared with Jewish Currents, the Federation compared such language to that used by Nazis and white supremacists, saying that while echoing white supremacist viewpoints “may not be the intention of the B’Tselem authors, this language promotes antisemitism and/or an extremist view.” (Asked to respond to the Seattle Federation’s memo, Dror Sadot, a spokesperson for B’Tselem, said: “In the face of the growing consensus of Palestinian, Israeli, and international stakeholders, including leading human rights orgs—all concluding, as B’Tselem did a year ago, that Israel’s regime is one of apartheid—the Seattle Jewish Federation is opting to deny reality.”)

Corwin Berman said that denying Sussman’s request to fund B’Tselem likely reflects the Seattle Federation’s risk calculus that it’s important not to fund groups that use the word “apartheid” because giving such groups money could “alienate” other donors, likely more numerous, who would be upset by such philanthropy.

But Sussman cautions that the Seattle decision runs its own risk. “The Federation is making a big mistake for their own interests,” he said. “There are a sizable number of Jews who are supportive of Israel, and supportive of Federations for that matter, but who are being slowly excluded from the quote-unquote established Jewish community by virtue of their position on Israel.”

“B’Tselem and other organizations that are critical of Israel are not trying to hurt Israel,” Sussman added. “They’re trying to warn Israel that its practices are possibly unethical, possibly illegal, and, in any event, wrong. The failure to discuss them and the exclusion of those who wish to discuss them from the Jewish community are against their own self-interest.”

Do you have a similar experience with a Jewish Federation denying a request to send donor-advised funds to a group of your choosing? Send a tip to editor@jewishcurrents.org.