Four Takeaways From the 2022 Midterms 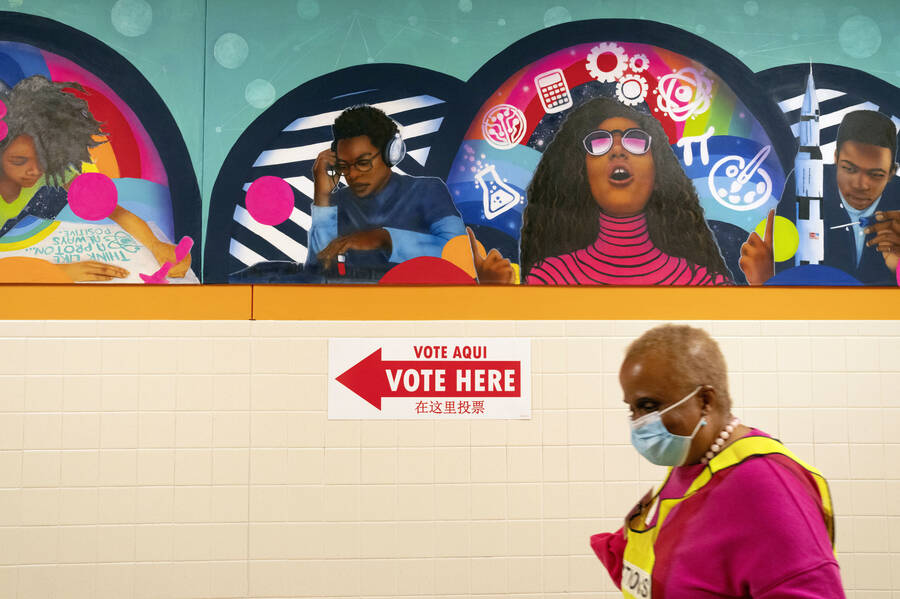 A poll worker walks past a "vote here" sign on Tuesday, November 8th at Ida B. Wells Middle School in Washington DC.

Ahead of Tuesday’s midterm elections, many pundits predicted a GOP blowout in House, Senate, and governor races across the US, citing Biden’s dismal approval ratings, the trend of sitting presidents’ parties losing midterms, and concerns about high inflation and crime. But as polls closed and results rolled in, it looked like Democrats may have secured the best midterm outcome for an incumbent party in two decades. Though Republicans will likely retake the House of Representatives, it’s a closer fight than expected, and, at press time, Democrats appear poised to retain the Senate, pending final vote counts in Nevada and Arizona, and a December runoff in Georgia. On the state level, Democrats gained trifectas—control of both legislative chambers and the governor’s mansion—in Maryland, Massachusetts, Michigan, and Minnesota.

Given that election analysis is an inexact science and US politics a vast, varied landscape, there’s no single narrative that can encapsulate the midterm results. So for today’s newsletter (subscribe here!), we invited several writers to approach the elections from their varying areas of expertise. Below, they offer sharp analysis on what the midterm results tell us about the present and future of key issues, beginning with Jewish Currents senior reporter Alex Kane reflecting on AIPAC, followed by the Sunrise Movement’s Matthew Miles Goodrich on youth turnout, The Intercept’s Akela Lacy on the crime panic, and The Nation’s Amy Littlefield on abortion.

After funding a number of victorious centrist candidates during the Democratic primary season, AIPAC, the most influential Israel lobby group in the US, ran into some trouble in the general election on Tuesday night. AIPAC’s Super PAC, the United Democracy Project, spent around $1 million to try and defeat Summer Lee, a Black progressive state lawmaker in the Pittsburgh area. Lee supports making US military aid to Israel conditional on Israel’s respect for Palestinian human rights; AIPAC has long lobbied against placing any restrictions or conditions on the $3.8 billion that the US sends Israel yearly. However, despite AIPAC spending in support of Lee’s Republican opponent Mike Doyle, the Democrat defeated him by at least an 11-point margin.

Still, these hiccups are less significant than AIPAC’s 2022 successes. Seven candidates who benefited from the largesse of AIPAC’s Super PAC in their Democratic primaries went on to win their general elections. Three of them are replacing Democrats who were allied with J Street, AIPAC’s liberal rival. In addition to the Super PAC-backed candidates who won their contested primaries, AIPAC’s more traditional PAC, which is limited in how much money it can spend, endorsed 365 candidates for Congress, 95% of whom won their elections, according to the lobby group. AIPAC can count on these Democrats to advance its agenda of maintaining a strong US–Israel alliance.

Even in cases where AIPAC-backed candidates lost their Democratic primaries or general elections, some of the eventual winners ended up being aligned with AIPAC’s goals. For instance, Luria’s Republican replacement is also a staunch supporter of Israel who believes that “the United States’ cooperation with Israel must continue to grow.” So even though its general election record was mixed, AIPAC can still look forward to an already friendly Congress becoming even more supportive of its interests.

Matthew Miles Goodrich of the Sunrise Movement on youth turnout

This summer, as the White House announced policies like partial student debt cancellation, investments in clean energy, and possible marijuana decriminalization, I started to wonder: is this what being pandered to feels like?

The feeling is unfamiliar. Usually, young people have good reason to question whether the government works for them. As a result, their participation in the rituals of democracy is underwhelming. This in turn compounds their alienation from the government as politicians inevitably court blocs of older voters who turn out more reliably.

On Tuesday night, this cycle appeared to be breaking—thanks in part to the White House’s strategic pandering to young voters. One of the major questions that loomed over this midterm was whether 2022 would more closely resemble 2018, when youth turnout spiked to deliver a stinging rebuke to the Trump administration, or 2010, when the youthful coalition behind Obama’s first presidential run stayed home. Incredibly, Biden—whose approval ratings among young people were abysmal as recently as this summer—presided over the second-highest midterm youth turnout in three decades. The result was a gravity defying political performance, delivered by young people.

As returns continue to trickle in, I am reminded of the Heritage foundation co-founder Paul Weyrich’s quest to transform evangelical voters into a reliable faction of the Republican coalition. Until the second half of the 20th century, evangelicals were neither particularly political nor particularly motivated by abortion. But by stoking racial resentment and turning Roe v. Wade into a marquee partisan issue, Weyrich instigated the long term realignment of the conservative movement that reached its apex in Trump.

Might youth turnout in 2022 herald a similar shift in the Democratic party’s voting bloc? For his part, President Biden seems to think so. As it became clear that Democrats overperformed expectations on Election Day, he knew who he had to thank: young people.

Akela Lacy of The Intercept on the crime panic

In a 1970 memo to President Richard Nixon, longtime political consultant Arthur Finkelstein offered a prescient piece of advice: “Try to polarize the election around that issue which cuts best in your direction, i.e., drugs, crime, race.” The salience of Finkelstein’s message would be on prominent display for the next half-century, most recently in the midterm election races decided on Tuesday—although perhaps not in the way he might have envisioned.

In the months leading up to the election, Republicans insisted that crime was out of control, that the country was on the precipice of ruin, and that Democrats who supported popular uprisings for criminal justice reform in 2020 were to blame. Tuesday’s election results, though, show that despite millions of Republican dollars spent on ads against “soft on crime” Democrats, voters overwhelmingly rejected this narrative in races across the country from California to Iowa, Texas to Pennsylvania. In Minnesota, where cops murdered George Floyd in 2020, conservative panic over police reform efforts was not enough to elect pro-police candidates in two key races. While the tough-on-crime attacks helped sink at least one major Democratic campaign—Wisconsin Democrat Mandela Barnes’s uphill Senate battle against Republican incumbent Ron Johson—most police reformers won their elections against anti-reform, blindly pro-police opponents.

In New York, late polling in the gubernatorial race struck fear into the hearts of Democrats. It looked like GOP challenger Lee Zeldin’s focus on “Crime! Crime! Crime!”—and his claims that Democratic incumbent Gov. Kathy Hochul had downplayed the issue—might give the New York governor’s mansion to a Republican for the first time since 2002. Zeldin, however, lost by more than five points. In addition to Republicans, tough-on-crime Democrats suffered as well. Democratic Rep. Sean Patrick Maloney, who was boosted by police union money and whose campaign ads featured cops praising his stance against defunding the police, lost his race by one point—an embarrassing upset for the person who controls Democrats’ congressional war chest.

And in perhaps one of the most closely-watched states of the night, Pennsylvania Democrats who embraced moderate reforms won upset victories against Republicans, including another seat in the US Senate. In Pennsylvania’s 12th District, Summer Lee, a strong advocate for criminal justice reform, prevailed in the face of millions in spending on ads attacking her as radical and “anti-police.”

For the last two years, Democrats have puzzled over the best way to respond to Republican attacks on crime. Some strategists have argued that it’s ineffective to try to use reason or data to counteract the claims of rising crime. Others have encouraged Democrats to regurgitate GOP talking points and angle to become the party that will be the most obsequious to police. Lessons from Tuesday suggest a middle path: Democrats who think for themselves just might be the answer.

Amy Littlefield of The Nation on reproductive justice

Two things are clear as we consider the resounding victories for abortion rights alongside the better-than-expected overall results for Democrats. One is that pollsters vastly underestimated the power of a mobilized and outraged pro-choice majority. The other is that organizing works—in particular, campaigns for abortion-related ballot initiatives are tremendous opportunities to build the kind of broad coalitions needed to win back abortion rights.

Michigan shows the way forward. The campaign to enshrine reproductive freedom in the state constitution built a coalition that included racial justice groups, faith-based organizations, labor unions, health-care providers, and supporters across party lines. In Michigan, voters not only passed the constitutional amendment to protect abortion rights, but also re-elected Democratic Gov. Gretchen Whitmer and gave Democrats control of both legislative chambers for the first time since 1984. But it didn’t play out that way everywhere—certainly not in Kentucky, where Paul won more than 60% of the vote and Republican candidates buoyed by newly drawn maps expanded their supermajorities in the state legislature.

Fortunately, there’s a roadmap for using abortion as a gateway issue to bring political opponents into the fold. That framework is reproductive justice, which was created by Black women to describe a sweeping set of rights that go beyond legal abortion and include the rights to parent and to raise children in safe and sustainable communities. In Georgia, where the pivotal Senate race is still up in the air pending a runoff, organizer Toni Watkins said reproductive justice has proven to be a more successful organizing tool than talking about abortion alone.

Most people’s views on abortion are more complex than political slogans because they stem from personal experiences and intersect with a range of issues affecting their lives. “I can talk to you about abortion, and lead that conversation into food deserts, or poor education funding, or a lack of jobs,” Watkins said. As the former deputy director of the Stacey Abrams-founded voter outreach group New Georgia Project, Watkins has used this strategy while canvassing low-income Black voters. But in this moment of collective outrage over the fall of Roe v. Wade, it’s a framework that should be used everywhere. After all, as Watkins points out, “What issue doesn’t fall under safe and sustainable communities?”

Matthew Miles Goodrich is a writer, organizer and the fundraising director of the Sunrise Movement.

Akela Lacy is politics reporter at The Intercept.

Amy Littlefield is abortion access correspondent at The Nation.