Black Antisemitism Is Not Inherently “Left-Wing”

Blaming tragedies like the Jersey City shooting on the left is reductive and dangerous. 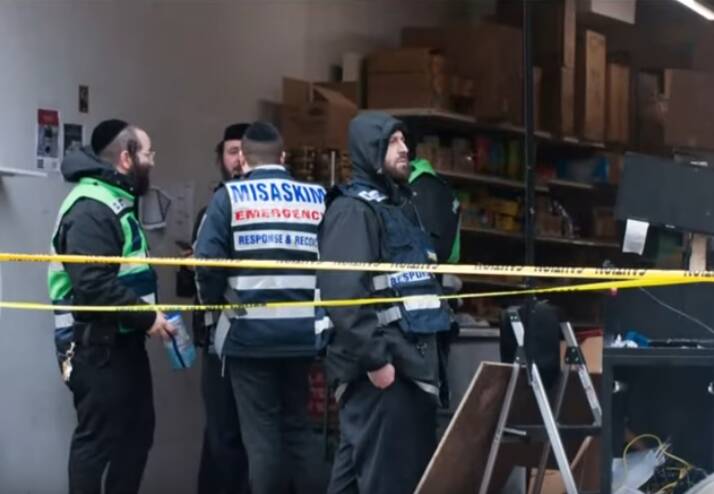 ON DECEMBER 10TH, David Anderson and Francine Graham charged into a kosher market in Jersey City, gunning down two members of the local Satmar Hasidic community and a shop employee (an immigrant from Ecuador) and engaging in a protracted shootout with police before dying in a hail of bullets. The couple, who are also prime suspects in the killing of an Uber driver and an undercover police officer prior to the market shooting, were quickly revealed to have held past ties to a Harlem-based sect of the Black Hebrew Israelite (BHI) movement; it was also revealed that Anderson had made antisemitic posts on social media.

In the aftermath of the shooting, many publications and pundits zeroed in on the apparent BHI connection, collapsing a diverse constellation of African American religious sects into a single ”hate group.” For some, this connection seemed to reinforce a broader narrative of “Black antisemitism” that right-wing pundits often conflate with “left antisemitism,” spuriously grouping all Black people with the political left. Erielle Davidson, a writer at the right-wing website The Federalist, described the killers as “believers of a left-wing, anti-semitic ideology.” Seth Mandel, the executive editor of the Washington Examiner, used an offensive Facebook comment made by a Black Jersey City Board of Education member in the aftermath of the killing to assert that “[i]ntersectionalism”—Mandel’s misspelling of the Black feminist framework of intersectionality—“remains an excuse to murder Jews.” And both leftists and Black Jews have been unfairly held responsible for a killer whose views and actions we abhor.

Antisemitism can and does exist in left-wing spaces, including those in the Black community. But conflating all Black anti-Jewish attitudes with the left is dangerous, turning a complex problem that occurs accross the political spectrum into a mere cudgel for the right. Further, a poorly defined concept of “Black antisemitism” not only risks promulgating racist stereotypes about African Americans—treating us as inherently violent, criminal, and irrational—but also obscures the specifics of the various ways antisemitism can manifest, making it harder for us to fight back.

Early reports have linked Anderson to BHI sects, as well as Nation of Islam (NOI) leader Louis Farrakhan. Indeed, Anderson, who used the name Dawad Macabee online, referenced teachings common in some BHI sects, which identify with Biblical narratives about Jews while claiming that modern European Jews are usurpers of this ancient Hebrew identity. His posts frequently characterized both Jews and white Christians as “Edomites,” a term used in some BHI teachings to refer to enemies of God. He also frequently referenced the King James Bible and asserted that King James was a Black man—a common belief in BHI sects.

But a closer look at Anderson’s social media profiles reveal that he was deeply skeptical of both BHI and Farrakhan, and seemingly more extreme than either. On Facebook, he warned, “All Israelite camps have proven to mislead people,” and in one post he dismisses Farrakhan (whom he called “Farrah-Con”) as overly friendly to Jews—a telling comment, given Farrakhan’s well-documented history of antisemitic rhetoric.

An investigation by the Anti-Defamation League into Anderson’s social media presence complicates the picture even further, revealing the often contradictory ways that antisemitism can manifest in the African American community. Anderson drew his beliefs from a diverse array of Black separatist ideologies as well as popular online conspiracy theories, many of which are also common among far-right and white nationalist groups. His posts included references to the Masons, the Illuminati, and the eugenicist Khazar theory, as well as violent homophobia and misogyny. This combination belies easy assumptions about a monolithic “left-wing” Black anti-Jewish bias.

But even if Anderson had been a more orthodox BHI or NOI adherent, that wouldn’t make his ideology “left-wing.” Though movements like BHI and NOI are often labelled as such because of their association with theologies of Black liberation, they are actually culturally conservative and invested in patriarchal family values, homophobia, free market capitalism, and oppostion to abortion and miscegenation. Many of their most ardent critics are feminist and left-wing voices in the Black community, from Angela Davis to young Black Lives Matter organizers to media figures who challenge them regularly.

Black separatist religious movements like BHI seek to subvert white supremacist Christian teachings enforced during slavery, often by reversing rather than rejecting racial hierarchies. Similarly, NOI casts Europeans, including European Jews, as the racially inferior creation of an evil Black scientist named Yacub. The relationship of these groups to Jewish identity is complex, as many Black Americans relate to the Exodus stories of freedom from slavery and seeking a Promised Land, while also holding ideas about Jewish people that are influenced by Christian antisemitism. The claim of groups like BHI of being “the real Jews” is similar to Christian supersessionist theology, which views Christians as the true inheritors of the covenant between God and the Jewish people. The scapegoating of Jews for killing Christ, a belief promoted by Farrahkhan, has been traced by some scholars, such as the Jewish journalist and Farrakhan biographer Arthur Magida, to Protestant Christian teachings during slavery. In both cases, this “Black antisemitism” simply reflects broader, and deeply rooted, American antisemitism.

Much like early white American antisemites, Anderson made Jews scapegoats for systemic inequality, blaming us for everything from police brutality to economic exploitation. It is unfortunately not uncommon for marginalized people to respond to real tensions around issues like class and race by blaming another marginalized group rather than the structures of oppression themselves. Reactionary Black separatism should be understood as one of many diverse responses to white supremacy—one that tragically mirrors the ideology that it claims to fight. It is not a stand-in for all Black liberation movements, and it’s false and misleading to cast it as “left-wing.”

David Anderson and Francine Graham alone are responsible for their biases and their deadly actions. But as we unpack what motivates such terrible violence, we cannot paper over the perpetrators’ actual beliefs and cultural context for the sake of a politically expedient narrative. Using Black antisemitism as a cudgel against the left further divides the Jewish and Black communities at the expense of actually understanding and fighting antisemitism. It also too often erases the ways that Black antisemitism is interconnected with the antisemitic and anti-Black history of the United States, foregoing actual analysis in favor of racial stereotyping and divisive rhetoric.

The violent ideology of the Jersey City shooters reflects centuries of history in which Black and Jewish communities have been divided and pitted against each other under a system that harms us all. Both antisemitism and racism can only be combated through solidarity and mutual empathy among marginalized communities, which the right’s inflammatory framing of incidents like the Jersey City shooting threatens to undermine.