Lara Friedman on the wider stakes for free speech. 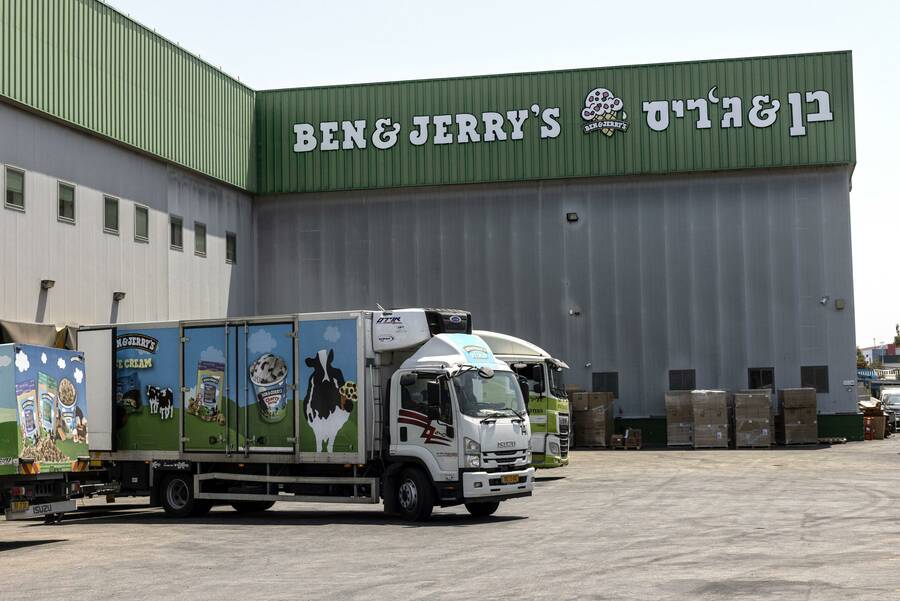 When Ben & Jerry’s announced on Monday that it will no longer sell its ice cream in the occupied Palestinian territories, Israel’s defenders immediately jumped into action. Some 35 US states have laws on the books that prohibit their governments from doing business with companies that boycott Israel, and Israeli Foreign Minister Yair Lapid took to Twitter to announce that he will be encouraging these states to enforce such laws against Ben & Jerry’s and its parent company, Unilever. Israeli Ambassador to the US Gilad Erdan followed up with a letter to the governors of those 35 states urging them to take action against Unilever, which also owns major brands like Hellman’s and Lipton.

This raises a number of thorny questions: Are these laws likely to be enforced against Ben & Jerry’s and Unilever—and does the US Constitution permit that? Will these efforts force Ben & Jerry’s to reverse course, or could they inadvertently bring down the legislative apparatus penalizing the Boycott, Divestment, and Sanctions (BDS) movement? And what are the implications for future attempts to push companies to cease doing business in the occupied territories—let alone in Israel’s pre-1967 borders?

I discussed these questions with Lara Friedman, president of the Foundation for Middle East Peace and a Jewish Currents contributing writer, who has long tracked anti-BDS legislative efforts. Our conversation has been edited for length and clarity. It originally appeared in yesterday’s email newsletter, to which you can subscribe here.

Mari Cohen: A lot of people are framing this as one of the first major tests for state-level anti-boycott legislation. Do you see it that way?

Lara Friedman: It’s certainly not the first test. There have been lawsuits against this legislation in multiple states, and in all but one case, the courts have been quite clear that this legislation is unconstitutional. In pretty much all of those cases, the states have gotten around those rulings by amending the law so that it doesn’t apply to those plaintiffs—for instance, to a teacher or a translator or a small company. With Ben & Jerry’s, there is potentially an opportunity for this to go to court with a bigger company. Before now, there hasn’t been a bigger company that wanted to file a complaint, because of worries about reputational harm. Ben & Jerry’s and Unilever are staking out a public position here. If they’re deprived of contracts, they could take it to court, which could force the courts to deal with the constitutional issue without states being able to just tweak the law.

MC: Do those previous rulings give us any sense of whether the constitutionality would hold up in the case of bigger companies?

LF: In all but one case where this issue was brought before a judge, it has been emphatically ruled unconstitutional. Does that necessarily mean that a judge would rule that way again? It just depends on the judge. If it was found unconstitutional, it’s pretty much guaranteed it would be appealed, possibly up to the Supreme Court.

MC: So it’s possible that by invoking these laws, the Israeli government and its supporters could end up provoking a backlash or even invalidating the laws.

LF: Whether Texas takes action against Ben & Jerry’s based on its existing laws shouldn’t depend on whether the Israeli government is lobbying it to do so. There’s something incredibly unseemly about a foreign government doing that. It’s worth noting that former Prime Minister Benjamin Netanyahu and other Israeli officials have publicly taken credit for these laws. If Israel has worked to get the US to adopt a body of law that, with this Ben & Jerry’s case, ends up being ruled unconstitutional, that would be ironic.

MC: But given that these laws are on the books now, even though they’re likely unconstitutional, it’s a pretty significant risk that Ben & Jerry’s and Unilever have taken.

LF: I have to assume that they knew when they made this decision that they could lose contracts with certain states. But that’s unlikely to affect the company’s bottom line. Divestment is largely a performative action; efforts to divest from fossil fuels haven’t really hurt the fossil fuel industry, for instance. With Unilever, it may lead to a small, temporary drop in the stock price. But most investors aren’t going to say, wow, Ben & Jerry’s is really cheap now, but we can’t buy it because they’re not working in the settlements. Most people don’t care about that; some people will see it as a reason to invest.

I think what we’re really seeing is an effort by Israel to send a message to other companies that might be thinking of doing this: don’t go there, we’ll make you miserable. It could have a chilling effect.

MC: That sort of worked with Airbnb a couple years ago, right?

LF: Airbnb is a little bit more complicated because it was about to launch an IPO, and there was a clear effort to tank that. Another piece is that there were a number of SLAPP suits, manufactured for the purpose of making the company’s life difficult, not necessarily of winning. One of the lawsuits was filed on behalf of an Israeli company that somehow had a footprint in New York arguing that it had intended to buy or rent property in a settlement in order to use it with Airbnb, and now was facing antisemitic discrimination. I don’t think you can make the same argument with a New Yorker who lives in a settlement saying he’s being illegally discriminated against because he can’t buy ice cream.

But the right-wing Foundation for Defense of Democracies has a briefing out today, which, if you read between the lines, seems to suggest that there may be an effort to get shareholders in Unilever to sue the company and the board of directors for breaching their fiduciary responsibility. I am not an expert on business ethics, but that seems like a stretch to me. I think it’s more about creating enough noise that Unilever backs down, says this was a mistake, and maybe blames a low-level employee. Doing so would actively legitimize the conflation of Israel and its settlements, which is the number one goal, along with discouraging anyone else from trying this.

MC: A lot of people who are complaining about Ben & Jerry’s are theoretically two-staters who don’t necessarily support settlements or the occupation, but it turns out boycotting settlements is still a red line for them.

LF: That was the case with Airbnb too, and it didn’t matter then either. Airbnb was accused of boycotting Israel, because they didn’t want to work in settlements anymore. This is an argument that we’ve been having within the Jewish community for more than a decade. What exactly is allowed? You say that boycotting Israel is wrong. You say that boycotting settlements is wrong. You say UN resolutions condemning Israel are wrong, and that the Obama administration was wrong not to veto one. How are we allowed to protest Israeli policy in the West Bank?

Critics have argued that boycotting settlements will have zero impact—that it’s pointless, vindictive, and stupid. But it clearly is not pointless. It’s the thing Israel is most worried about, because they have spent years erasing the Green Line on the ground and in the hearts and minds of supporters of Israel. And the Ben & Jerry’s boycott is about reestablishing the Green Line.

Nobody wants to be accused of being an antisemite. So the message becomes that if you don’t support settlements, you support antisemitism.

MC: But if this results in a significant show of support from the left, could that offset right-wing pressure?

LF: Yeah. I’m not an organizer, but people coming out and calling bullshit on these arguments definitely makes a difference. I don’t know what will ultimately be decided, but the Airbnb precedent was devastating. It sent a message that if a company does this, it ends up in a worse place than it started.

MC: You’ve written about how these anti-BDS laws set precedents not just around Israel, but around free speech in general, including other types of boycotts. If this does end up being a legal fight, what kind of wider implications could it have?

LF: The bottom line is that state legislators will pass what they want, wait for it to be deemed unconstitutional, and then tweak it to get away with it. I’ve been warning for years that these laws are a template for restricting free speech on any issue. I wrote about this in 2018, and was dismissed as alarmist. Now these anti-BDS laws are being cut and pasted into legislation to punish people who boycott the oil and gas industry, or who “discriminate” against the gun and ammunition industries. If you want to do business with the state of Texas, you better not be someone who publicly refuses to invest in the gun or fossil fuel industries. Eventually those will end up in court too, but they haven’t yet.

Free speech is not just about protecting speech that we like, or that we’re comfortable with. The failure of Americans to stand up and protect free speech that is critical of Israel is a historical shanda, and the implications of that are just starting to become clear. I don’t want to say it’s too late, but you cannot have free speech if you don’t protect it for everybody. The idea that the Jewish community is actually complicit in, and in fact part of the leading edge of, a new era of legislating against free speech—it remains shocking to me. Then again, maybe this Ben & Jerry’s case will mark the end of those efforts.