ACLU Asks Supreme Court to Take Up Right to Boycott

If the top court does hear the case, it would lead to an unprecedented ruling on whether anti-boycott laws violate the First Amendment. 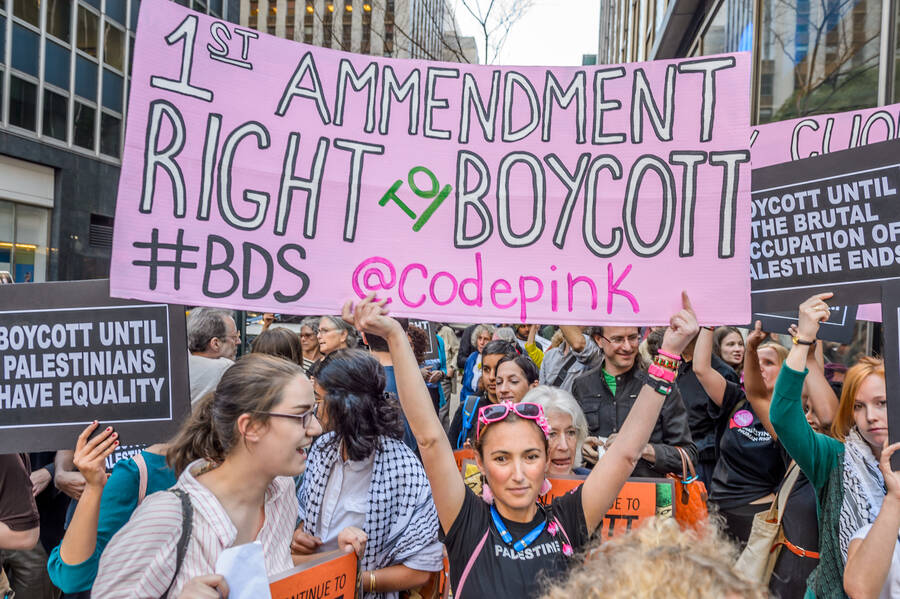 On October 20th, the American Civil Liberties Union (ACLU) asked the Supreme Court to review a lower court’s ruling upholding a 2017 Arkansas law that requires government contractors to sign a pledge stating they will not boycott Israel if they do not want to face a 20% reduction in contractor fees. The ACLU’s intervention on behalf of an Arkansas newspaper that refused to sign the anti-boycott pledge marks the first time the Supreme Court has been prompted to review a law aimed at suppressing boycotts of Israel.

The Arkansas statute is one of 28 similar laws that make government contracts conditional on pledges not to boycott Israel. Supported by Christian evangelicals and Jewish establishment groups and boosted by the conservative American Legislative Exchange Council, these laws aim to weaken the Boycott, Divestment, Sanctions (BDS) movement targeting Israel over its human rights abuses against Palestinians. “We know what these laws’ overall intent is and that’s because their backers have been very clear about this. It’s to try to suppress speech for Palestinian rights,” said Radhika Sainath, a senior staff attorney at Palestine Legal, a group that defends the free speech rights of Palestinian rights advocates. “There’s a growing movement in this country supporting Palestinian freedom, and pro-Israel advocacy groups are quite afraid of this.”

Anti-boycott laws’ impact goes beyond the Palestine advocacy world. In the past few years, states have passed or considered a wave of copycat laws modeled on anti-BDS legislation, aiming to protect fossil fuel companies and gun manufacturers from boycotts. The top court’s decision could thus have major implications for the legality of political boycotts writ large.

There is no guarantee the Supreme Court will agree to the ACLU’s request. Reviewing the case would require granting what is known as a writ of certiorari, which needs the assent of four Supreme Court justices. If the Supreme Court does take up the case, it would lead to a first-of-its-kind ruling on whether anti-boycott laws violate the First Amendment. If the court declines to take the case, the lower court’s ruling upholding the constitutionality of Arkansas’s anti-boycott law stands, serving as a binding precedent in the states under the Eighth Circuit’s jurisdiction and a potential model for decisions on anti-boycott laws in other circuits.

Some Palestine advocates worry that the right-wing Supreme Court will uphold anti-boycott laws as constitutional, which would mean overturning the court’s 1982 decision in NAACP v. Claiborne Hardware—a case which established the right to boycott by ruling that Mississippi residents boycotting white-owned businesses to protest segregation were protected by the First Amendment. “I am certainly concerned that the Supreme Court, in its current ultra-reactionary makeup, might decide to basically overturn that 1982 precedent,” said David Mandel, an attorney and member of the National Lawyers Guild and Jewish Voice for Peace. But the ACLU believes the court will affirm the 1982 decision. “Given Claiborne Hardware, the Supreme Court has a strong foundation here to establish that this kind of activity is protected. We’re confident that the Supreme Court will stand by that decision,” said Brian Hauss, senior staff attorney with the ACLU Speech, Privacy, and Technology Project.

The Arkansas case dates back to October 2018, when The Arkansas Times was in negotiations with the University of Arkansas Board of Trustees over renewing advertisements for Pulaski Technical College, a state school that had regularly advertised in the weekly paper. However, once the Board of Trustees informed the newspaper’s publisher Alan Leveritt that the state required him to sign an anti-boycott pledge to maintain the contract, Leveritt refused—not because he wanted to boycott Israel, but because he was opposed to signing a pledge that infringed on his First Amendment rights. Leveritt also refused to accept the 20% reduction in fees that came with not signing an anti-boycott pledge. As a result, the college stopped publishing ads in The Arkansas Times, leading to a loss of income for the weekly paper.

The ACLU decided to sue on behalf of The Arkansas Times in December 2018. In 2019, a district court ruled that the state’s anti-boycott law is permitted under the US Constitution, but that decision was reversed by the Eighth Circuit Court of Appeals in 2021. The state of Arkansas then asked for the full Eighth Circuit panel of judges to rehear the case, and the conservative-dominated appellate court handed down its final ruling—that the anti-boycott law is constitutional—in June of this year. Writing for the majority, Judge Jonathan Kobes said that the Claiborne Hardware decision only protects the speech accompanying a boycott, not the boycott itself, which, in his interpretation, is economic activity unprotected by the First Amendment. Civil liberties advocates take issue with this interpretation of the 1982 decision, arguing that Claiborne Hardware held a boycott itself, and not just speech surrounding it, to be a protected First Amendment activity.

The ACLU’s appeal to the Supreme Court comes at a time when the American judiciary is divided over the constitutionality of anti-boycott laws. The Eighth Circuit—the only appeals court to weigh in thus far—has come out supporting anti-boycott laws, while lower level district courts in Texas, Arizona, Kansas, and Georgia have struck down laws similar to Arkansas’s as violations of the First Amendment. The Fifth Circuit Court of Appeals, another conservative-dominated court, is currently considering the Texas anti-boycott law.

Since no other case concerning political boycotts has been ruled on in recent years, there is little in the way of tea leaves that might help predict how the Supreme Court will rule. But any ruling will have profound implications. “The stakes of this case are essentially whether the government should have the power to selectively outlaw particular boycott campaigns simply because it disagrees with their message,” said Hauss.

A ruling in favor of the ACLU would mean “that the vast majority of Israel anti-boycott laws would swiftly be declared unconstitutional,” Hauss said. In contrast, a ruling holding anti-boycott laws as constitutional is “likely to embolden states to move against other political boycotts they disfavor,” said Ramya Krishnan, a staff attorney at the Knight First Amendment Institute. Some states could even adopt bans on boycotts if the Supreme Court does not repudiate the Eighth Circuit ruling, Krishnan said. “If states are empowered to do that, that’s a very powerful weapon that they can use against political movements that they dislike,” she added.

Given these threats to free speech, even progressive Jewish groups that do not support BDS have spoken out against anti-BDS legislation: T’ruah, a rabbis’ human rights advocacy group, criticized the Eighth Circuit ruling in Arkansas for opening “the floodgates to politically motivated restrictions on any form of boycott.” But mainstream Jewish groups have been friendly to the anti-BDS efforts. In June, the American Jewish Committee praised the Eighth Circuit’s ruling, with the AJC’s chief legal officer Marc Stern commending the court for “unequivocally affirm[ing] that [anti-boycott] laws do not infringe on the First Amendment” and ruling that “taking a position on a boycott does not inhibit free speech.” The Anti-Defamation League (ADL) and the Jewish Federations of North America (JFNA) have stayed silent on the Eighth Circuit decision, though both have supported anti-BDS policy in the past. In 2016, ADL CEO Jonathan Greenblatt celebrated a New York executive order directing state agencies and authorities to divest from any company that supported BDS, and in 2017 the group’s Nevada chapter testified in favor of the state’s anti-BDS bill, which prohibits state agencies from contracting with entities that boycott Israel. The JFNA, meanwhile, helped craft anti-BDS legislation in Texas and North Carolina.

“The organized Jewish community has known from the get-go that [anti-boycott laws] infringed on free speech,” said Lara Friedman, President of the Foundation for Middle East Peace. “Given a choice between upholding free speech and the right of protest for Americans, and undermining those rights writ large in order to protect Israel from criticism, they’ve demonstrated they prefer the latter.”