A Journey Into the Heart of Whiteness

For more than 50 years, Rosalind Fox Solomon has sought to understand whiteness from its margins. 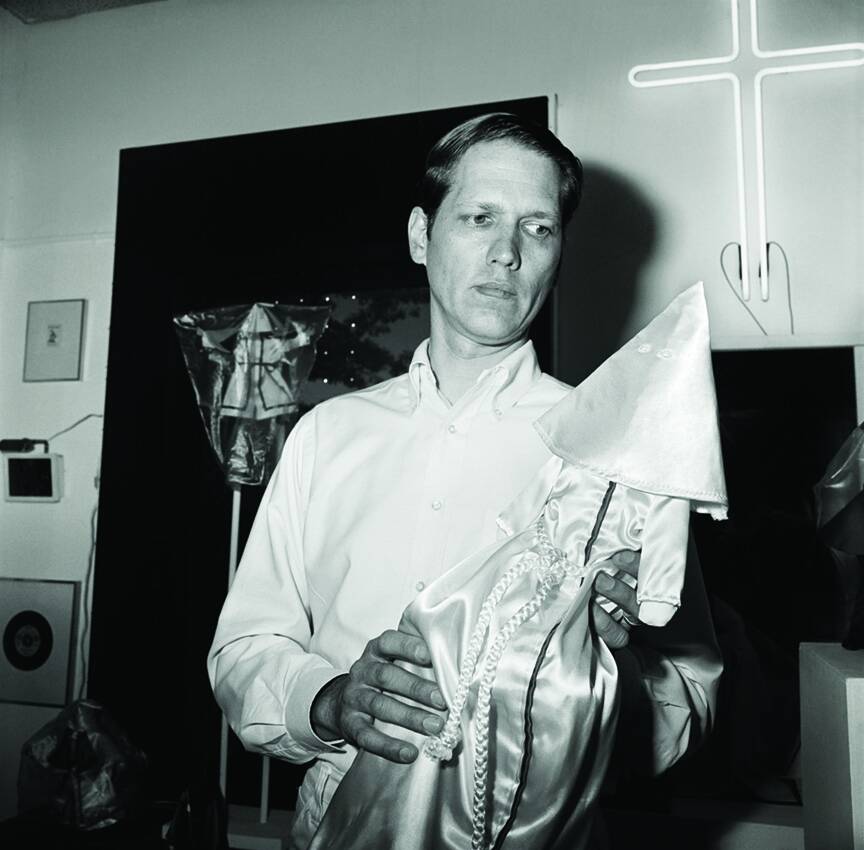 IN AN UNTITLED 1978 PHOTOGRAPH taken in Washington, DC, by Rosalind Fox Solomon, a buttoned-up white man grips a doll dressed in a silky white gown, a familiar triangular hood ominously covering the doll’s face. The man gazes down at the doll with the kind of consternation one might expect from a father confronting his misbehaving child. It’s a dramatic, eerie portrait of white kinship, characterized by a stirring mix of wariness and ambivalence. The photographer’s gaze is simultaneously humanizing and ethnographic. It’s the gaze of an outsider attempting to make sense of racial and regional social dynamics—but an outsider who, by virtue of her own whiteness, is able to translate its scripts.

Fox Solomon, still an active working artist at 90 years old, has been taking photographs for over 50 years, all in black and white. Her work—which has captured the faces of the AIDS epidemic in the United States, the aftermath of a devastating earthquake in the Peruvian Andes, the Troubles in Belfast, apartheid in South Africa, and much more—has been exhibited in nearly 30 solo shows and 100 group exhibitions, and is housed in the collections of more than 50 institutions around the world.

Fox Solomon, who is now based in New York City, was born to a secular Jewish family in Highland Park, Illinois. Her political consciousness began to develop when she moved to the American South in her early 20s. “At 23,” she told me, “I married, left my job as a secretary, and moved to my husband’s hometown, Chattanooga, Tennessee.” She described a keen awareness of racial discrimination in her new residence in the South, coupled with an uncertainty about how to combat it. “My husband’s family owned movie theaters,” she explained. “All of them were segregated, and one theater was designated for nonwhites,” per Jim Crow mandate. She told me how, stunned by the assassinations of Martin Luther King, Jr., John F. Kennedy, and Robert Kennedy, she lost faith in her ability as an individual to work effectively for political and social change. So, she said, she “turned inward and began taking pictures.”

Her photography externalizes her inner mono­logue about the inequalities she witnessed across the US. She distances herself from her subjects; she avoids conversations before photographing them because she believes that “small talk puts individuals into a social [mode] where they feel at ease.” That sense of comfort can conceal what Fox Solomon ultimately hopes to document. “I want to find the inner person who is more likely to be revealed in silence,” she said.

The complexity that manifests in her work is in part a result of this desire to capture her subjects’ humanity while refusing to fully embrace the camaraderie of a mutual investment in whiteness—the kind of familiarity that allows for one member of an in-group to positively identify another. Fox Solomon’s white Jewish gaze is a manifestation of an unsettled and unfixed position in a racial hierarchy. A gaze informed by this sensibility has the potential to avoid collapsing into the hegemonic “white gaze”—a fundamentally colonial, white supremacist visual sensibility that dominates and consumes racial others. The resulting work is white yet white-critical, white yet Jewish.

Writing about Fox Solomon in The New Yorker, Doreen St. Félix rightfully invokes W.E.B. Du Bois in describing our inability to ever fully transcend the deep inscriptions of segregation: “the color line,” St. Félix writes, “remains viciously entrenched on psychological and physical ground.” But there is another color line—subtler than that of legally enforced ethno-racial separation—that divides “real whites” from the others. St. Félix makes reference to the “dirty Jew” slurs that Fox Solomon endured in her youth; these haunt her work, indelibly marking the images’ white gaze.

In this, Fox Solomon’s images share a sensibility with an international tradition of white Jewish photographers—a tradition that includes the late David Goldblatt, a South African photographer famous for his photos of the apartheid era. Unlike many white photographers of his time, Goldblatt did not seek to make further spectacle of the racist violence. Instead, he explored whiteness’s interiority—the unexamined (at least by whites) animating force behind apartheid’s brutality. Even at their most mundane, his photographs of Afrikaner family and community life—the engine of the National Party, which designed and enforced the policy of racial separation—are marked by a nightmarish and destabilizing undercurrent of horror.

Fox Solomon’s work, like Goldblatt’s, has an unforgiving, penetrative quality. Both artists practice a form of documentation that does not feign objectivity, but instead seeks out the social subtext in every interaction. This affect is on display throughout her most recent book, 2018’s Liberty Theater, which collects photographs taken in the South between 1974 and 2000. Some capture bidirectional demonstrations of fatigue and disdain: in one, a black woman glances up wearily while sorting legumes as she stands beside a buffoonish, grinning white man; in another, a white woman appears to glare at her black male choir-mate (ironically, while holding the songbook for “Let There Be Peace on Earth”).

The images are printed without titling or con­textualizing information. (The date and location of each photo are listed in an appendix.) This choice allows for a productive ambiguity; the viewer is allowed to project meaning onto Fox Solomon’s portrayals of Southern white life, rather than negotiating with a meaning asserted by the artist. In one particularly striking image—taken in Scottsboro, Alabama, in 1976—a white man presents two papers from the Jackson County Circuit Court, one of which reads, “Rape.” Initially, I read this photo as a portrait of a man indicted for rape; his gaze appears steely, cold, unrepentant. It called to mind the visage of Supreme Court Justice Brett Kavanaugh during his 2018 confirmation hearings—indignation overlaid atop the fragility of white masculinity. When I offered this reading, Fox Solomon clarified that the documents in the photograph pertain not to allegations made against the man holding them, but to those made against the Scottsboro Boys, the nine African American teenagers who were falsely accused of raping two white women on a train in Alabama in 1931. Considered in this context, the man’s expression adopts another defining feature of white masculinity: a contempt for the very existence of black men, and for the threat they purportedly pose to white women’s bodies and innocence—and therefore to white society at large.

Often, Fox Solomon’s subject is the white family—which, in white supremacist ideology, constitutes the core unit for maintaining and advancing white demographic dominance (consider the Fourteen Words, the popular white supremacist slogan: “We must secure the existence of our people and a future for white children”). In one image, taken in Chattanooga in 1975, what could be understood simply as a lovely, affectionate kiss bestowed by a mother on her sleepy child, whose head hangs back limply, appears also as an attempt to resuscitate; it is both basic parental affection and an expression of the desire to breathe life into whiteness—that is, to perpetuate and maintain it—by means of the nuclear family structure. A number of Fox Solomon’s photographs depict white families casually posing at rest or engaged in play. Yet she draws to the surface an underlying menace, making visible the violence of the purity politic and the social obligation to blood and country that cement the white family bond.

Throughout her oeuvre, Fox Solomon reveals a consistent lack of commitment to the project of whiteness. This is crystallized in her 2014 book THEM, which features photographs taken in Israel and the West Bank over a period of five months across 2010 and 2011. In the context of Israel and Palestine, Fox Solomon is, like all white Jews, racialized differently than in the US: she is in a position of greater power and security. Yet in these images, where her white Jewish positionality has an opportunity to become more hegemonic, it instead manifests as even less certain—even more curious, more cautious, more forgiving—than in her other work. (And notably, a greater proportion of these images depict nonwhite subjects—or at least subjects racialized differently than white Americans.) Here, Fox Solomon traverses the vast and varied emotional landscapes of subjects whose worlds are governed by precarity and violence, from Ghanaians and others dutifully making a pilgrimages to holy sites, to a Palestinian woman appearing to grieve—perhaps wiping a tear from her eye—as she holds a poster featuring Arabic script and depicting a man’s face. One photograph shows a small group of young people—presumably Israeli Defense Force soldiers—dressed in military uniforms; four of them sit in the background, apparently chatting amicably, while the faces of two others in the foreground seem more solemn—thoughtful, or perhaps disturbed.

Time and again, Fox Solomon’s work exhibits a refreshing lack of narrative predictability. There is a tremendous mutability, a shifting objective to the capturing of an image, and a marked disinterest in resolving the tensions the camera documents. Her images’ ability to hold multiple valences within the still frame arises in part from the gaze’s particular unwillingness to use the camera as a tool for further colonization. For Fox Solomon, her reflective, inquisitive approach is a matter of both aesthetics and ethics. “When I photograph someone,” she told me, “my responsibility is to be honest.”