A Historic Jewish Wedding in a New Jersey Women’s Prison 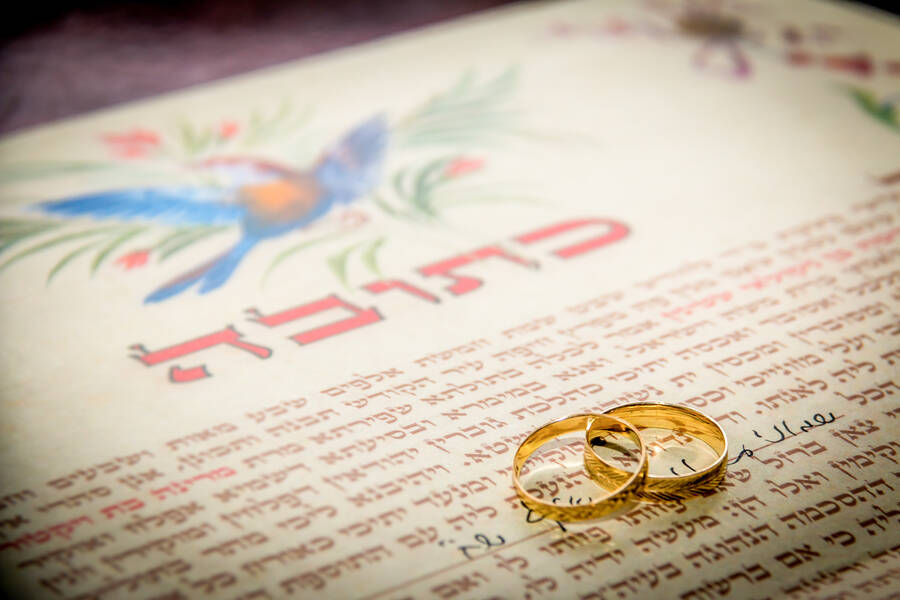 A ketubah, or Jewish marriage contract

THE FIRST TIME Jennifer Pasquarello saw the woman she’d later marry, she was walking down a hallway at New Jersey’s Edna Mahan Correctional Facility for Women to get lunch with the rest of her unit. As she strolled past a classroom, someone caught her eye. “I was standing outside the window where she was at and I thought, ‘I have to meet that girl,’” she told me recently.

After they crossed paths a few more times, Michelle Angelina, who’s also incarcerated at Edna Mahan, approached Jen and asked her questions about her life. “We hit it off,” Jen said. The two became friends first, and then the relationship grew.

The two would go to the law library together or hang outside in the yard and feed the geese. They started sharing a bunk bed—Michelle on top, Jen on the bottom. The women understood one another and felt enriched by their differences. “Sometimes she brings me more out of my shell,” said Jen. “And sometimes I make her calm down a little bit more.”

In November, Jen got to work. She molded bread into a ring with a heart-shaped head and allowed it to harden, then painted it purple with watercolors. In November, as the two sat across from each other out in the yard, Jen passed Michelle the ring and proposed. “She had no idea that I was going to ask her and she kind of got choked up about it,” Jen said.

On April 11th, 48-year-old Jennifer and 39-year-old Michelle were wed in the facility’s first-ever marriage between two women. Ever since I first started corresponding with Michelle in 2017, I’ve seen her story through the singular prism of her battle to survive as a trans woman in Department of Corrections custody, to eke out a space where she could medically transition and live safely among other women. But on the couple’s happy day, under a clear blue sky, I drove out to Edna—located about one hour west of Brooklyn, on New Jersey’s rural border with Pennsylvania—to witness a different kind of story. Even amid the horrors of mass incarceration, life continues behind bars just as it does under any other difficult circumstances. Michelle and Jen had fallen in love, and now they were going to celebrate.

That day, I met up in the visitor parking lot with the two other outside attendees—one a close friend of Michelle’s, the other a rabbi active in queer communities who requested that her name be withheld to safeguard her spiritual relationship with the couple. After leaving our phones and most other belongings in the car, we walked to the security trailer to be processed for entry. We placed our items on the x-ray conveyor belt and walked through a metal detector. Accompanied by prison staff, we were escorted out of the security trailer through the back door and into a prison van. After a brief drive across the grounds, we waited to be cleared through a series of gates and locked doors, until we finally arrived at the gymnasium where the wedding would take place.

Michelle and Jen had already had their own journey to the wedding. In New Jersey, incarcerated people who want to get married must first travel to the county seat to obtain a marriage license. They must also foot the bill for the correctional officers mandated to accompany them on the trip. In mid-March, at a cost of $384, Michelle and Jen were chained at their feet and their wrists and ankles and driven to the Hunterdon County Clerk’s Office and back to get their paperwork in order. They were kept chained the entire time.

For Michelle, who observes Shabbat and does her best to live according to Jewish law, having a religious wedding was essential. (Jen, who grew up Catholic, has been learning about Judaism and is planning to convert, although completing her conversion has proved impossible since she can’t access a mikvah.) As they planned for their wedding day, the prison administration agreed to permit the use of grape juice for the ceremony but denied the brides access to chuppah poles. Celebratory attire? Denied. Flowers? Also denied. Breaking of the wine glass? Out of the question.

The arbitrary and capricious rules that govern prison life require creative workarounds. As we walked into the gym, Michelle and Jen jumped up to greet us, dressed in their tan prison uniforms. A friend had used the painted bread method to make matching rainbow stud earrings for the couple. Another friend had used watercolors, finished with floor polish, to paint their nails. Michelle wore blue eyeliner and Jen wore green.

As we waited for the ceremony to begin, I sat down with the couple’s incarcerated guests—three women they’d grown close to during their time behind bars. As Michelle and Jen left their dorm earlier that day, they told me, everyone else screamed in support. This ceremony is “pretty monumental,” said one guest, Kathy. “They’re making history,” Talibah, another guest, chimed in. News of the wedding had left the many other couples at Edna wondering if they should do the same. “Everybody is waiting to see if they’ll be separated after the wedding,” said Talibah. The DOC has a history of splitting couples up, the guests told me, and no one was sure whether that would change for couples that opt to formalize their relationships.

Despite the wedding party’s collective and creative spirit, there was still the problem of needing chuppah poles. How to get around this setback? Would it be possible to locate some brooms? Eventually, the rabbi proposed a solution: the guests would embody the ritual by taking turns holding up the tallit ourselves. After the brides signed their ketubah and their state wedding license, a group of volunteers was assembled, each holding up a corner of a tallit as high as they could. Michelle circled around Jen three times and Jen circled around Michelle three times. Then they walked in one circle together and joined the rabbi under the narrow wedding canopy.

Soon it was my turn to hold up the chuppah. All of us—brides and guests, incarcerated and not—were pressed closely together, in a moment of physical proximity normally forbidden inside. A few correctional officers leaned against a wall near the door, leaving us undisturbed. We made kiddush. Jen and Michelle exchanged rings and then shared their vows with each other. “You’ve helped me become kinder, gentler, and humbler. I will fight for us,” said Michelle. “I will cherish you forever,” said Jen. Next came the seven wedding blessings: after we heard them in Hebrew, we took turns reading the English translation.

As the ceremony neared completion, the rabbi explained one final ritual: “Traditionally, at the end of a wedding we’d break a glass, to remember that even on our happiest days, there is structural brokenness and personal suffering in our world.” But “I don’t need to remind the two of you of this,” she added. “Your eyes are open to the brokenness of the world, of the systems that harm people and perpetuate harm. The pain of the world is yours.”

Instead of breaking a glass, Michelle and Jen symbolically stomped their feet to shatter the traumas they carried and to move toward healing. The guests erupted in cheers. After singing the shehecheyanu, we all turned our backs on the couple to give them a brief moment of yichud (privacy)—the chance to share a moment alone together and a peck on the lips.

Such opportunities are rare. Though they may be married, Michelle and Jen cannot kiss each other good morning. Lying in bed next to each other to watch TV, even fully clothed, is a punishable offense, they told me. As their guests noted, there are no guarantees that the New Jersey Department of Corrections will prioritize keeping them together or provide avenues for relief if they are separated. Their relationship adds a richness to their lives, and it also carries risks. “[Being together] makes a lot of things easier,” Jen told me. “And a lot of things more difficult.”

After the ceremony was over, the wedding party crowded around a plastic table to make Kiddush over the grape juice and Motzi over a challah sweetened with raisins. Eventually, a correctional officer approached to tell the visitors our time had run out. Back we passed through three locked doors and three locked gates, into the van to cross prison grounds, ushered through the back door of the security trailer. I picked up my license and car keys and opened the door to the parking lot. I had barely been gone an hour.

Despite continued restrictions, the two women are thrilled to have tied the knot. These days, Michelle helps her now-wife Jen with her homework and is teaching her Midrash and Torah. They still read together and go into the yard to feed the geese. For Michelle, getting married deepened her commitment to Jen as well as her faith. “It reinforces my trust in Hashem,” she told me. “It’s another beautiful part of my life. I get to spend the rest of my life with the person I love. My neshamah [soul] is bound to hers.”

Report
A Birthright Protest Livestream Disappeared From Facebook
The social network has long been accused of enabling Israeli rule over Palestinians.
Aviva Stahl
Conversation
Forgotten Histories: Women of the First Intifada
An interview with Julia Bacha, director of Naila and the Uprising.
Aviva Stahl
Sign up for our email newsletter, featuring exclusive original content