The social network has long been accused of enabling Israeli rule over Palestinians. 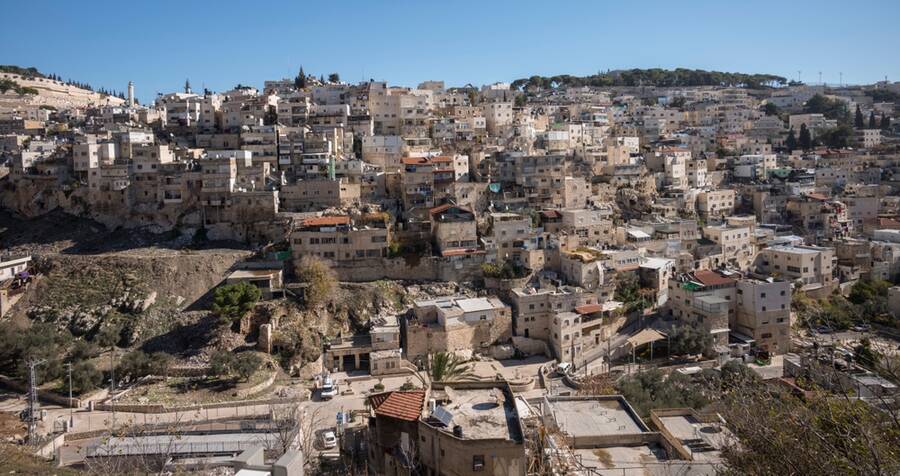 THIS PAST WEEKEND, a Facebook Live stream that had been posted by a Birthright trip participant, which showed her and seven others on her trip as they staged a protest of the tour’s overtly pro-occupation messaging, disappeared from the social network.

The protest, organized in part by the US-based anti-occupation collective IfNotNow, occurred on July 15th, during a visit to the City of David in Jerusalem. That site is managed by the settler organization Elad, a group whose stated mission is to “Judaize” East Jerusalem by evicting Palestinian families.

Jewish activists have since launched a petition calling on Facebook to restore the video and cease censoring user content that is critical of the Israeli government. A Facebook spokesperson denied that the site had taken down the video, and said that it appeared the video had been removed from the user’s end (IfNotNow, in turn, denies this claim).

One Palestinian family facing eviction is the Sumreens, whom the eight demonstrators opted to visit instead after leaving the Birthright trip. The Sumreens have been targeted for eviction by Elad and Himnuta, a subsidiary of the Jewish National Fund, under Israel’s Absentee Property Law, which allows Palestinian properties to be transferred to Jewish owners.

But the activists’ message about the plight of the Sumreens was cut short, when their livestream of the protest was disabled or removed, and could no longer be viewed on the site. IfNotNow, which helped organize a prior, widely publicized Birthright walkout in late June, condemned the company for the livestream’s alleged removal and its larger failure to assist Palestinians targeted by the Israeli government for what they put on Facebook.

“Facebook has a long, documented history of bowing down to the pro-Occupation establishment in Israel and the United States by suppressing posts by and about Palestinian activists and others critical of the Israeli government and its military rule over millions of Palestinians,” said IfNotNow in a statement emailed to Jewish Currents. “This act is part of that pattern of corporate power being used to prop up authoritarian governments.”

A spokesperson for Facebook denied the site had played any part in having the video removed or disabled. The only other explanation for the video being made unavailable to viewers, according to Facebook, is that the user, or someone else with access to the video’s permissions, deleted the video or changed its privacy settings. Reached for comment, an IfNotNow representative said the participant who posted the video would never had deleted it, and suggested that Facebook was hiding the truth.

But the ongoing uncertainty about how this particular video was removed from Facebook risks obscuring broader patterns when it comes to digital rights and freedom of speech in Israel. Since 2015 hundreds of Palestinians have been arrested for content they posted on social media, according to the prisoners’ rights organization Addameer. Meanwhile, activists and journalists who have studied the issue note that Jewish Israelis who post inflammatory content—even explicit calls to kill Arabs or Palestinians—are rarely put in jail or placed under house arrest.

For years, Palestinians have accused Facebook of engaging in censorship on behalf of the Israeli government. In September 2016, after two state officials met with top Facebook executives, the site agreed to do more to rein in content that could allegedly be used to incite violence. Since then, Facebook has regularly removed posts and shut down accounts at the request of the Israeli authorities. In 2016, the vast majority of posts taken down by Facebook—70% of them—were removed in violation of Israeli free speech regulations, according to the human rights group Adalah.

It’s not just the potential censorship of critical views that’s at issue, according to advocates. In recent years the country has been arresting more and more Palestinians and charging them with “incitement on social media,” a criminal offense that has been interpreted in very broad terms to include the distribution of news. A 2016 report by Palestinian Centre for Development and Media Freedoms tracked how Israel was targeting journalists and activists for prosecution, concluding that “Israeli occupation authorities are using all possible means to silence Palestinians, and deprive them of enjoying their right to freedom of expression and opinion.”

Israel is not the only country in which Facebook has been accused of removing messages posted by marginalized groups while allowing white supremacist content to remain. In an investigation published in June 2017, ProPublica revealed guidelines used by the site’s censors to differentiate between hate speech and political expression. According to the report, in some instances these guidelines have protected white men from “hate speech” but enabled the targeting of anti-racist messages posted by Black Lives Matters activists.

“The documents suggest that, at least in some instances, the company’s hate-speech rules tend to favor elites and governments over grassroots activists and racial minorities,” noted ProPublica. “In so doing, they serve the business interests of the global company, which relies on national governments not to block its service to their citizens.”

The apparent indifference of the Facebook rulebook is not merely a problem for activists in the US. As the number of Facebook users has exploded worldwide over the past decade, activists everywhere from Palestine to Myanmar find themselves struggling to keep up with Facebook’s capacity for both censorship and fueling hate speech.

“We live in an era of heavy attacks on digital rights and freedom of speech, it unfortunately represents a global trend, and Israel constitutes an extreme case of it,” Nadim Nashif, the co-founder and director of 7amleh, the Arab Center for the Advancement of Social Media, told Jewish Currents in an email. “It abuses human rights by using technology and heavy surveillance, people should see it as a global struggle, and a global fight for digital rights.”

In another case involving suppression of pro-Palestinian speech, on Tuesday, an Israeli court sentenced Palestinian poet Dareen Tatour to five months in prison on charges of incitement to violence. Tatour was convicted in May after posting a poem to Facebook and YouTube that include d the lines: “I will not succumb to the ‘peaceful solution’ / Never lower my flags / Until I evict them from my land.”

Tatour has already spent the last two years under house arrest, and she is preparing to spend several months in prison as punishment for posting her work online. “My trial ripped off the masks,” Tatour said in May after her conviction.

You can watch the full version of the removed livestream here.

Newsletter
A Historic Jewish Wedding in a New Jersey Women’s Prison
Two brides tie the knot with human volunteers acting as chuppah poles
Aviva Stahl
Conversation
Forgotten Histories: Women of the First Intifada
An interview with Julia Bacha, director of Naila and the Uprising.
Aviva Stahl
Sign up for our email newsletter, featuring exclusive original content
Want original reporting and analysis on Israel/Palestine?
Sign up for the Tuesday News Bulletin.