When the Clinic Becomes Part of the Carceral State

A former Rikers physician on unfreedom’s corrosive relationship to care. 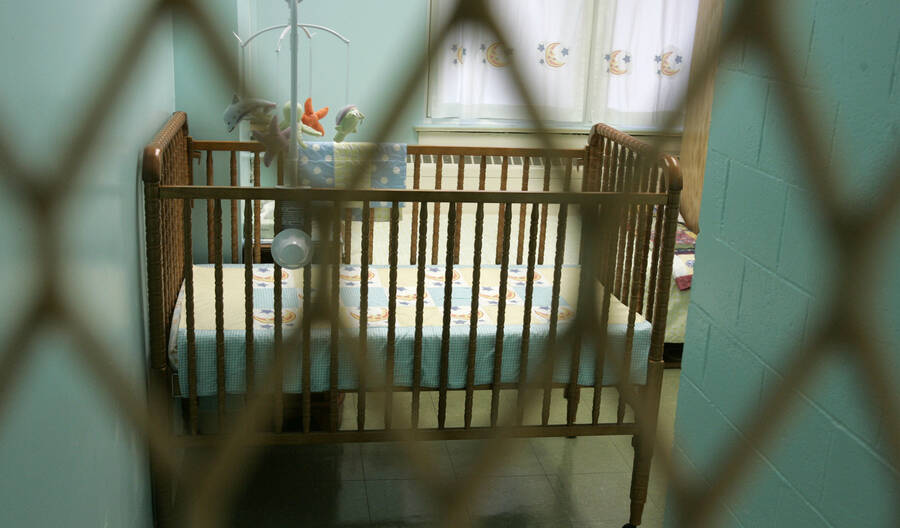 A crib sits in the cell of an inmate housed in the Wee Ones Nursery unit at the Indiana Women's Prison in Indianapolis, April 28th, 2008.

THE FIRST INCARCERATED PERSON I ever took care of was casually referred to as “property of the state” by the corrections officer standing guard at his hospital door. I paused, shocked, and asked him to repeat himself, sure that I must have misheard. I didn’t know then that the phrase was common parlance among prison officials, who also frequently refer to detainees under their charge as “bodies,” not people. Medicine, too, sometimes conflates “patients” with “bodies”; a long history of coercive practices in the profession means that personhood is too often rendered incidental to biology. Medicine and the state are twin enterprises, driven by commitments that produce some thorny contradictions. Both impose order on people’s relationships with themselves and each other, ostensibly in service of our individual well-being though frequently, in practice, in ways that oppose it. They administer what they contend we need, and often withhold what we might choose for ourselves.

I worked for five years as a geriatrician and palliative care physician in the New York City jail system. My patients were trapped at the intersection of two crises: incarceration and serious illness. In jail, palliative care—the field of medicine that directly addresses the experience of being sick, not just the presence of disease—is a practice of harm reduction. Incarceration is so antithetical to the relief of suffering that I did my best work not in a clinical role but in a quasi-legal one: advocating for compassionate release for people who were very sick, in the hopes of making my patients free before they died.

I am not trained to provide abortion care. Few internists are, despite the ubiquity of need and the relative straightforwardness of helping people manage the end of a pregnancy. I do have colleagues in the New York City jail system who do that work with great skill and commitment. People detained on Rikers Island currently have access to contraception counseling and prescriptions, sexual healthcare, pregnancy care, and abortion. Last year, the New York City Council passed a bill that entitled detained pregnant people on Rikers to routine visits from a doula. Incarcerated patients in New York City are not shackled during childbirth, a routine practice in other states. Still, for incarcerated people, these gestures of care all take place in the broader context of confinement. Detained people cannot choose who will be at their side when they give birth. During labor, an officer is stationed outside the door. In theory, detained mothers are able to keep their babies with them in the jail nursery, but in practice, law enforcement agents usually intervene to separate the birth parent from the infant before either has left the hospital.

Before Dobbs v. Jackson Women’s Health Organization overturned the federal right to abortion last month, access to even this constrained standard of care was difficult to obtain in most other correctional systems. Now, the circumstances are more dire: States that enact abortion bans will certainly apply them to the people in their custody. The Federal Bureau of Prisons, which has facilities throughout the country, theoretically provides access to limited abortion care but does not cover its cost; it is unclear whether the Bureau will continue to allow federal detainees to seek abortions going forward. Every year, an estimated 58,000 pregnant people enter jails and prisons in the US. One imagines that this number will only increase as abortion is further criminalized. Together, these shifts will force a growing number of people to gestate and give birth in unfree conditions.

During my time on Rikers Island, I learned just how corrosive unfreedom is to well-being. My patients often needed medical care at a clinic or hospital outside the jail system, but they were not entitled to know the dates of their scheduled appointments or to choose their providers. The bus ride to the hospital was notoriously rough and bumpy. Men who had injuries or surgical wounds that had not yet healed often refused to get on because they couldn’t tolerate the discomfort of the trip. Patients who did board the bus usually had both their hands and feet shackled for transport. If the Department of Correction got them to the clinic late or if a doctor had to cancel at the last minute, the trip would be in vain and the appointment might not be rescheduled for weeks. Detainees are not allowed to bring any personal possessions, including photos and letters, with them to the hospital, even if they know they are likely to be admitted; they are allowed no special comforts at all. I once tried to bring an ill man a bag of skittles and was told I couldn’t because skittles weren’t on the approved commissary list. I once tried to bring an ill man a novel he requested and was told I couldn’t because it wasn’t on the approved reading list. I requested that wardens let family members—who could only visit if given permission by security, on certain days, between certain hours—come with their phones, so they could take photos of their dying son or father or brother; this request was never approved.

Under these conditions, some of my patients stopped taking medication, refused procedures, spit at their nurses—leveraging their sick bodies against the system that oppresses them in self-destructive, desperate acts of resistance. You cannot routinely force a person to eat, to shit, to swallow a pill, to have their blood taken, to receive dialysis. The successful execution of these demands requires, if not full consent, at least some level of acquiescence and participation. When a person’s autonomy is severely constrained, they will exercise sovereignty through non-compliance, even if it costs them greatly.

As a physician, I helped petition for the release of several pregnant women. Some of these women were experiencing serious complications related to their pregnancies; others had coexisting health issues that made their situations high risk. Sometimes a person was in so much distress at the prospect of delivering a child behind bars that they would refuse the prenatal care that was recommended to them, and it seemed that the only way to save both mother and child was to remove the stress of incarceration. Judges did not like to decarcerate women who were refusing care and often argued that they were safer in jail. We countered that it was the control asserted by the jail that put them at such risk, and that freedom was necessary to restore their interest in caring for themselves.

Respect for autonomy is a foundational principle in bioethics—but the medical field’s definition of autonomy is narrow, and doctors are quick to override it when a person makes choices that deviate from the physician’s recommendation. Entire classes of people are granted only limited autonomy under the logic that they do not have the capacity to make safe decisions or the right to full self-determination. People who are incarcerated are one such class. They are “property of the state” and also wards of the state, which theoretically has an obligation to determine what healthcare they need and to deliver it. Correctional systems are legally mandated to provide care that reflects the standard in the broader community—but what does it mean when the community is at odds with itself, and the standard allows a denial of care that forces people to tolerate enormous risks? People who are incarcerated cannot seek second opinions, or move across state lines. Their autonomy is not in tension with their well-being; it is in tension with the mandates of a system that sees their suffering as deserved, and which instructs them through its indifference to distrust the care it offers.​​

Medicine and the state might conspire in our best interests, or against us. When the law runs counter to the well-being of the people, to fulfill their promise to “do no harm,” physicians must break the law. This is not something individual doctors can easily decide to do alone. With the Dobbs decision, the Supreme Court has effectively expanded the carceral state to include every clinic in the country. By overturning Roe v. Wade, the Court has created new conditions that invite people to show us how bleak and deadly things can get. Practices of control subvert the conditions of care, and for some people, the impulse to freedom is stronger than the will to survive. Lives will be lost if doctors comply; lives will also be lost as patients are forced to resist.

Rachael Bedard, MD is a research fellow at the Institute to End Mass Incarceration at Harvard Law School. Until recently, she was the senior director of the Geriatrics and Complex Care Service at Correctional Health Services, a division of New York Health+Hospitals that provides healthcare in the New York City jail system. Her writing has appeared in The New Yorker, The New York Times, The Washington Post, and elsewhere.