Tasnim’s foray into Hebrew is part of an escalating propaganda war between Israel and Iran. 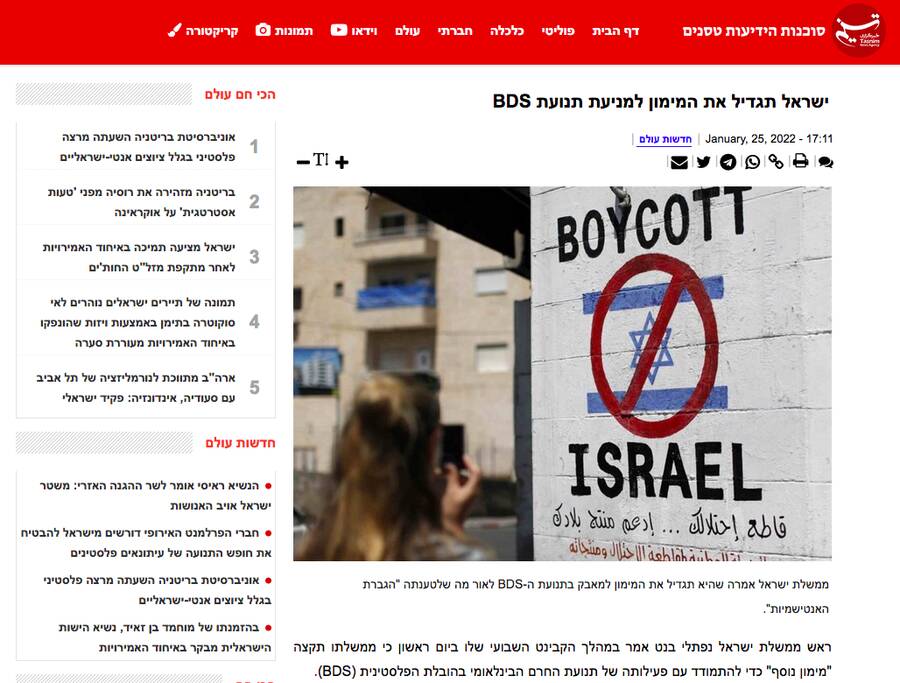 On January 3rd—the second anniversary of the Trump administration’s assassination of Qassem Soleimani, commander of the Quds Force of the Islamic Revolutionary Guard Corps (IRGC)—the affiliated Iranian news agency Tasnim launched a new Hebrew website, complete with its own Twitter and Instagram accounts. Majid Gholizadeh, Tasnim’s chairman, acknowledged that “the number of Hebrew speakers around the world is not high,” but justified the launch “in light of the importance of the Palestinian problem for the Islamic Republic and for Muslims around the world.” Gholizadeh further accused global media of systematically censoring topics relating to the “Zionist regime” and occupied Palestine. “It’s unacceptable that not only is the public blocked from receiving information about the reality of occupied Palestine and Zionist crimes, but that the information residents of these very occupied lands receive is greatly filtered and falsified,” he said.

The articles that have been published so far on the site include reports on, among other topics, European governments urging Israel to stop the expansion of settlements in the West Bank; Iranians commemorating “Gaza day” in solidarity with the Palestinian people; a house demolition in the East Jerusalem neighborhood of Sheikh Jarrah; and the political debate in Israel about former Prime Minister Benjamin Netanyahu’s possible plea bargain in his corruption trial. If there is a unifying theme, it is the exposure of Israel’s brutality, but editorial inconsistency and spotty quality predominate.

To some observers, the very existence of such a site suggests the involvement of the Iranian regime at the highest levels of power. “I find it hard to believe that Tasnim would launch a Hebrew site without approval from the supreme leader or some other entity in his office, not to mention an explicit request from them,” said M., an exiled Iranian reporter who asked to remain nameless. “I assume the people operating the website are connected to Iranian defense forces,” M. added, drawing on personal familiarity with Tasnim personnel. Citing a common saying in Iran—“If you want to know who’s going to be assassinated next, read Tasnim”— M. asserted “a fair amount of certainty that whoever is at the helm of this Tasnim department is a higher-up in Iranian defense.”

“In order to understand this move, one must understand the Iranian regime’s state of mind,” said M. “They feel they are under constant censorship and unable to reach the Jewish public inside or outside Israel—which is funny, because most Jews who live outside of Israel speak English or other languages in which the Islamic Republic of Iran can communicate.” M. noted that a Hebrew website is unlike a website in English, German, or any other language which some Iranian residents might speak. “There are hardly any Hebrew speakers in Iran, and if there are, I doubt they would identify themselves to an IRGC website, because they would automatically be suspected of espionage,” he said. H., another exiled Iranian media commentator, agreed with M.’s hypothesis that the new site was run by defense personnel and suggested that it could be used to cultivate spies inside Israel: “Beyond a desire to join the propaganda warfare, this website can also serve as an unofficial recruitment device,” he said.

Tasnim’s decision to launch a Hebrew channel cannot be interpreted in isolation from Israel’s lively media activity in Farsi throughout the years, first and foremost through the Israeli Ministry of Foreign Affairs (MFA) Farsi-language Twitter account, which has hundreds of thousands of followers. Unlike Tasnim’s new website, which posts news in broken Hebrew—likely the result of relying on Google Translate—the MFA’s account fervently tweets in fluent Farsi, publishing pro-Israel propaganda and incessant snipes against the Iranian government.

There is also the Israeli Prime Minister’s official Farsi Twitter account, which is not quite as popular, but also has more than 100,000 followers. During his long tenure as prime minister, Netanyahu fostered a near-obsessive habit of addressing the Iranian people directly, whether from the podium at the UN General Assembly, in media interviews, or in videos filmed in his office. When Netanyahu “opened a channel to address the Iranian people,” M. said, he “left the Iranian government dumbfounded at the ease with which a man can sit in his office, press a button, and speak to their people. They felt left behind, behind the times.” The central message of all of these direct addresses was always the same: Israel is not the enemy of the Iranian people, the Islamic Republic is. The current Minister of Foreign Affairs, Yair Lapid, also recently tweeted a similar message in Farsi. (Additionally, M. noted that the Farsi-language entertainment channel Manoto, which won’t reveal its funding sources, is widely rumored to be supported by Israel as a way to stoke dissatisfaction with Iran’s government.)

Generally, direct messages by Israeli officials to Iranians on social media have enjoyed a high level of engagement, sometimes garnering hundreds of likes, shares, and comments per post. This is mostly due to the highly polarized and fractured nature of Farsi-language social media platforms (which of course reflects actual political divisions among Iranians worldwide), especially on Twitter, in which supporters of the Islamic Republic and its opponents (be they monarchists, socialists, or any other subgroup) both inside and outside Iran are constantly engaged in heated and bitter quarrels. Pungent posts from Israeli officials are of great interest for both sides: For supporters of the Iranian regime, they demonstrate the prominent role of the Islamic Republic against Israeli policies in the region, while for opponents they are a soothing echo of their own hatred for the Iranian regime. This displays an unusual political dynamic, as Israeli posts mocking the Islamic Republic are frequently embraced by pro-democracy Iranians who might presumably otherwise reject Israeli policy toward Palestinians.

Given these longstanding Israeli propaganda efforts, both perceived and confirmed, “The question is not why Iran launched a Hebrew website now, but why they hadn’t done it earlier,” said M. “The common perception in Iran, even among those who don’t necessarily support the government, is that, generally speaking, Israel controls the global media.” He noted that this perception is bolstered by the fact that criticism of Israel is often censored on social media. “They feel they are behind in this ‘soft war,’ as they call it,” M. said. “I’ve heard this more than once from government officials: ‘We have won every war we’ve fought, except for the media battle.’”

Suspicion and fear of foreign influence campaigns via media channels is familiar in Israel as well: During the anti-Netanyahu mega-protests in 2020 and 2021, Israeli media emphasized Facebook’s deletion of thousands of Iranian accounts attempting to encourage Israeli protesters. Another story, broken by Channel 12 news last month, accused the Iranian government of managing a network of fake profiles aimed at spreading political chaos throughout Israel—for instance, by manipulating prominent Likud activists into sharing fake content without their knowledge, including promotions of protests against both current Prime Minister Naftali Bennett and Netanyahu.

Still, it does not seem that Israelis have an appetite for the Iranian perspective on their domestic affairs. Although Iran features constantly in the Israeli public discourse, since its launching,Tasnim’s Hebrew website has received almost no attention in Israel. Not a single mainstream Israeli media outlet even reported its existence.

Orly Noy is an Israeli journalist, translator, and activist who has written for publications like +972 Magazine and Middle East Eye. She is on the Executive Board of B’Tselem.

Newsletter
Biden’s Education Department Delays Defining Campus Antisemitism
To the relief of Palestinian-rights advocates, the department’s Office for Civil Rights did not adopt the controversial IHRA definition of antisemitism this past December.
Alex Kane
Newsletter
The State of Antisemitism Reporting
How America’s major newspapers have stumbled in covering a serious phenomenon
Mari Cohen