Watching the Protests from Prison

We cannot protest our treatment at the hands of the police state, but we are looking to the protesters with pride. 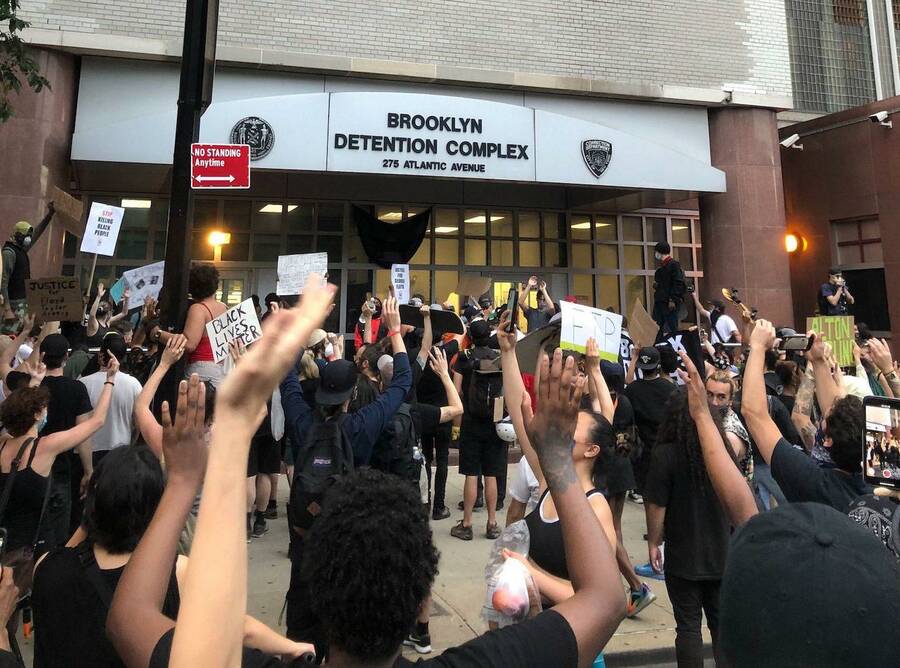 FOR THE LAST FEW WEEKS, the population in the prison where I’m housed—along with the rest of the world—has been captivated by the protests against police violence taking place in cities across the globe. None of us behind bars are strangers to police brutality, abuse of power, or lack of accountability. These practices are the norm in the communities most of us come from and in the prisons where we are incarcerated. Over-policing and abuse of power does not stop when you are arrested and convicted—with even less oversight and fewer procedural protections in prisons, it arguably gets worse.

The vast majority of the people behind the towering gates of prisons—along with their loved ones on the outside—have been victims of over-policed neighborhoods and dysfunctional courts their whole lives. I was 10 the first time I was harassed by a police officer and 13 the first time a correctional officer hog-tied me in my boxers and threw me in solitary confinement. As a white person who grew up in an impoverished community of color, I also recognize that my skin color likely shielded me from some of the abuses my Black friends experienced at the hands of police and prison guards.

Watching the recent events unfold has left prisoners feeling like the atrocities we experienced are finally coming to light. It has been invigorating to watch the entire world take a stand against these systems. Maybe this time our communities will see justice. Maybe this time we’ll see real change take place in the United States.

I hear pride in many of the men’s voices in here as they express their feelings toward those that hold the front line, peacefully, against the lawless police that run our streets. Sometimes I’ve heard men clapping or shouting—a sudden expression of the frustration that has been building up for years, or possibly over the course of their whole lives. Men in here walk by chanting, “No justice, no peace,” with a clenched fist in the air, or “I can't breathe,” in reference to George Floyd’s dying words—last words shared with others who have lost their lives to an overzealous police officer who felt entitled to do as he pleased.

I know the majority of prisoners wish they could be out on the streets with our brothers and sisters, standing shoulder to shoulder demanding change. In one unit there were even prisoners walking around with signs on their backs that read Black Lives Matter, demonstrating that they too have a voice in this fight. These small displays of protest are the only way we can show our solidarity with those on the streets who are fighting on our behalf. We ourselves cannot really protest our treatment: even peaceful protest tactics can result in prisoners being sent to solitary confinement indefinitely for allegedly trying to incite a riot. These tactics and lack of oversight leave many prisoners feeling like they have no voice at all.

IT’S IMPORTANT TO RECOGNIZE that the police state extends well beyond the streets. Even if we defunded all police agencies tomorrow, there would still be 2.3 million people behind bars, many of whom are Black, Indigenous, and people of color. Just because someone is incarcerated does not mean they deserve to suffer arbitrary abuses of power. Marking a separation between those deemed “deserving” of foul treatment from others is what led our country to where it is at this very moment. We need only to look at the Native American genocide, slavery, Jim Crow, and the continued oppression of Black people through state-sanctioned violence to understand this. It is not enough, now, for individuals to state that they are not a racist. It is time for people to actively work toward dismantling white supremacy and the systems, like the carceral state, that are fundamentally tied to it.

In the last two weeks, I have enjoyed seeing so many voices express that enough is enough. People refusing to stand down, refusing to go home. They are out there in the rain and the cold, refusing to be intimidated as they stand weaponless against police who are armed for war.

These displays of sacrifice are seen by prisoners as nothing short of heroic. And it isn’t just the people on the streets, but those who give supplies to protesters so they can continue their fight on the streets, and those who educate and amplify on social media platforms. Every action is driving the system towards change, and everyone is finding their role in the work of bringing transformation.

Given that we are in prison, many of us for committing property crimes, people probably assume we agree with the destruction that’s occurred during the protests. I myself do not entirely condone the destruction, but I understand it. It is an expression of decades and decades of anger and repression. Sometimes these expressions of rage must come to the surface in order to make real change. I was heartened to see the owner of a Minneapolis restaurant whose restaurant was damaged in the protest say, “Let my building burn, justice needs to be served.” The destruction of property pales in comparison to the militarized tactics the police continue to use against protesters. Property can be replaced. People cannot.

Not all prisoners agree with the protests and their messages, which come at us from our 15-inch television sets. Many on the outside might be surprised to know that Trump has a small cult-like following even behind bars. Still, while they may be a loud minority, the majority of us confined in these prisons are honored to see so many of our siblings of all races hold their ground and give a voice to those that have lost their lives to an unjust system. We are honored by your fight for those who remain caught in the net of the carceral state and continue to experience racism, abuses of power, and many other forms of oppression.

The sacrifices people have made to participate in the recent protests must amount to more than a moment to vent our anger and frustration. We must demand a real change in the policies that target marginalized communities and equality for all human beings. And until these changes are enacted, we must continue to make as much noise as we possibly can, to make sure people know that Black lives matter.