The View from the Ground 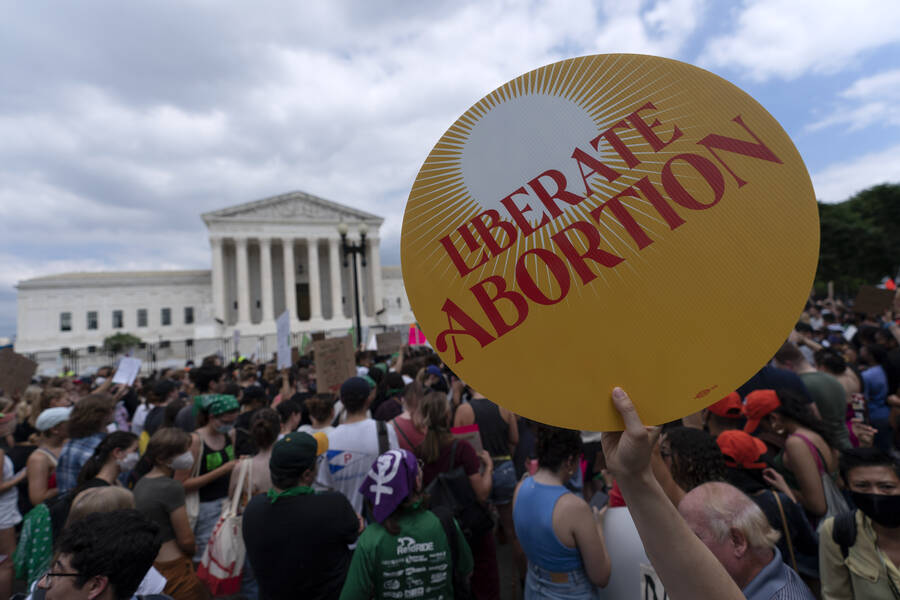 Activists gather outside the Supreme Court in Washington to protest the end of the constitutional protections for abortion that had been in place nearly 50 years.

This morning, the Supreme Court overturned Roe v. Wade, ruling that there is no constitutional right to an abortion in the United States. This decision will have profound and wide-reaching impacts: Abortion is expected to become illegal in dozens of states, leaving people who seek to terminate their pregnancies with drastically limited options. Some will travel across state lines to have abortions in places where clinics remain open; others will self-manage their abortions with pills. Many will be forced to carry pregnancies and give birth against their will; for some, this will have devastating health consequences. The decision also makes people more susceptible to being prosecuted for their pregnancy outcomes.

These restrictions didn’t come from nowhere. Since Republicans gained state legislative majorities in 2011, they’ve passed hundreds of restrictions on abortion access, creating significant barriers for people—particularly people of color, young people, and poor people—seeking to access care. Red states like Texas, where a six-week abortion ban went into effect in September 2021, and Oklahoma, which banned almost all abortions this past May, have given us a preview of what is now the reality for much of the nation.

But even in places where abortion is already criminalized, the Supreme Court’s decision will shift the terrain. In some restrictive states, many of the funds that provide vital financial and logistical support to people seeking abortions have begun to announce they are suspending operations for fear of legal action against their staff and volunteers. For example, Texas Equal Access Fund (where I am a volunteer)—which continued to assist people who needed to travel out of state to access abortion care when Texas banned abortion after six weeks gestation—has been forced to pause their work temporarily. These interruptions have enormous implications for abortion-seekers: It is rare for private insurers to cover abortions, which can cost hundreds or even thousands of dollars, and Medicaid is banned from covering abortion in all but a few blue states.

Still, many funds remain active, including some in red states—the new legal landscape is still coming into focus, and the state-level bans differ from one another. In some states, helping someone access an abortion by giving them money or a ride may now carry legal risks; in others, laws more narrowly criminalize healthcare providers. (Many of the new bans triggered by the court’s decision aren’t scheduled to go into effect for 30 days, and abortions scheduled for the interim period may be able to proceed.) Funds in states where abortion is expected to remain legal—sometimes called “receiver states” for their role as destinations for people forced to travel for abortion care—are still operational, and some are able to help people coming from other parts of the country. Funds that are pausing direct support continue to need resources as they work to assess the legal landscape in the hopes of re-opening. This confusion is ultimately most burdensome to people seeking abortions, who will have to search more widely to find the resources they need and, in some cases, may not be able to access them.

I spoke with Kamyon Conner, the Executive Director of TEA Fund, about what today’s ruling means for the fund, their clients, and people around the country seeking to access abortions or assist others in doing so. This conversation has been edited for length and clarity.

Arielle Swernoff: Thanks for making the time to talk on this horrible day. What does the Supreme Court decision mean for TEA Fund in the immediate future?

Kamyon Conner: We were prepared for the worst. We had already decided to pause our abortion fund. In order to protect ourselves, our volunteers, and the organization, yesterday was the last day we funded anybody. It’s likely that most abortion funds in Texas—and abortion funds all over the country [in states with restrictive laws]—will be pausing.

That is devastating because we know that clinics will be forced to close and that under those circumstances abortion funds have routinely ensured that people get care [by helping them travel to other states]. In Texas, we’ve already been living in a post-Roe reality, but now we’re not going to be able to help people travel to get abortions outside of the state until we get clarity from legal counsel about the risk associated.

AS: Abortion has been restricted in Texas for some time. Are there lessons we can learn from the work you’ve been doing in a highly restricted state and apply to the broader national context?

KC: The key lesson, which is not going to be a surprise to anyone, is that this battle we’re fighting is not just about abortion. It’s about white supremacy, it’s about anti-Blackness, it’s about power and control. I want folks to understand that people who have worked to criminalize abortion are not just attacking folks who want abortions; they’re attacking trans rights, as we’ve already seen. They’re attacking people’s ability to make decisions about their bodies.

I think many people are saying, “I can’t believe this happened”—but folks who have been working on this are saying, “We’ve been telling you this could happen.” The Supreme Court is wild with power. They are making really dangerous decisions. People are going to need to figure out the best ways to protect themselves and their families at this time.

AS: What will this decision mean for workers at abortion funds like yours?

KC: I think that’s something we’re still determining. What I can say is that we’ve been presented with a beautiful framework of reproductive justice, which was developed by Black women [and which encompasses the right to bodily autonomy, and to have children, not have children, and parent children in safe and sustainable communities]. It was coined because Black women specifically—and people of color and low-income people in this country in general—face vastly different issues than white middle-class women, and their needs weren’t being addressed by the reproductive rights movement. It lays out how we can ensure that people live in thriving, supportive communities. I think that we will see folks who have been doing abortion-forward work lean into an expansion of some of those efforts.

AS: What action can someone reading this take?

KC: People should put their energy toward local efforts to combat prosecutions over pregnancy outcomes. We need to push for folks who go to emergency rooms to not be thrown in jail. We saw what happened with Lizelle Herrera [a Texas woman arrested and charged with murder for allegedly self-inducing an abortion]. Her case was dropped, but she still had to go through the trauma, in her mind, body, and soul, of being booked in jail until someone could get her out. There’s going to be more of that.

We’re not going away. We’re going to fight like we’ve always fought to ensure that folks have abortion access. We know that abortion is a routine part of the full spectrum of pregnancy care. We’re taking some time to pause, grieve, and re-focus. I want to normalize that. We are prepared to keep fighting—we just can’t say yet what that looks like in this moment.

Abortion Funds: Abortion funds remove barriers to access by providing money for abortions, travel, lodging, and practical support to pregnant people. You can split a donation between 80 abortion funds here or find a fund in your state here.

Where to get an abortion: As laws change and clinics close in the coming days and weeks, ineedana.com has information on which clinics and funds remain open, where to get abortion pills online, and other questions. You can support efforts to keep clinics open at https://keepourclinics.org/.

Self-managed abortion: Plan C Pills has information on where people are buying abortion pills online. Aid Access can provide abortion pills by mail in all 50 states.

Legal help: If/When/How has a variety of resources to support people criminalized for their pregnancy outcomes, including the Repro Legal Helpline for information about people’s rights around self-managed abortion, and the Repro Legal Defense Fund, which provides financial support for criminal cases in which someone is alleged to have self-managed an abortion.

Newsletter
“Funding Abortion Is a Radical Act of Compassion”
An abortion fund worker in Texas on how their efforts will shift now that the state has effectively banned abortion after six weeks
Arielle Swernoff
How To
How to Give Yourself an Abortion
with pills
Arielle Swernoff
Sign up for our email newsletter, featuring exclusive original content
Short on time?
Sign up for our weekly Monday roundup of everything you missed in Jewish Currents last week.