“Funding Abortion Is a Radical Act of Compassion” 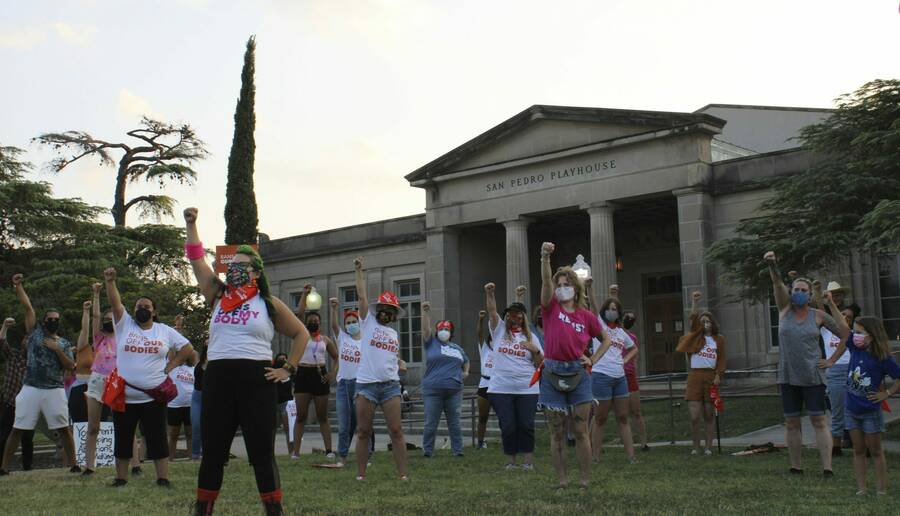 Yesterday, Texas enacted its six-week abortion ban, Senate Bill 8 (SB8), effectively banning some 85% of abortions taking place in the state. Republican-controlled state legislatures have attempted to pass six-week abortion bans across the South and the Midwest for years, but all previous efforts were either vetoed by governors or struck down by the courts. The difference between earlier legislation and SB8 is that Texas claims the state itself won’t enforce the law; instead, private citizens are now encouraged to sue anyone they suspect of “aiding or abetting” an abortion after six weeks, for which they can collect a bounty of $10,000, plus legal fees. The abettor can be a friend, a clergy member, an abortion provider, or even a rideshare driver who collects a fare taking a pregnant person to their appointment.

Abortion providers and other groups had been appealing to the Supreme Court to block SB8, noting that it violates Roe v. Wade, which recognizes a constitutional right to abortion up until the point of fetal viability (about 22 to 24 weeks gestation). Instead, last night, the Court upheld the law using its “shadow docket,” an increasingly controversial process through which the court decides cases on an emergency basis and without hearing arguments, or even attaching justices’ names to the ruling. Now, abortion advocates worry that Republican state legislators and anti-abortion activists will draft copycat bills in other states, and that abortion could become illegal in huge swaths of the country. This is no idle fear: 22 states already have laws on the books that could be used to severely restrict or ban abortion should Roe be formally overturned.

Abortion funds, which provide financial support for people seeking abortions, have been on the frontlines of the fight for reproductive freedom in Texas and across the country. Since neither Medicaid nor many private insurance plans cover abortion, these funds provide a vital financial lifeline for pregnant people. They are also prime targets of SB8, which positions them as likely defendants in the court cases to come. Anti-abortion groups have already set up websites and tip lines to encourage “pro-life whistleblowers” to point fingers.

There are plenty of clarifying legal analyses of the Court’s decision, but I wanted to hear from people on the ground about what SB8 means for Texans seeking abortion, the infrastructure that helps them, and the future of reproductive freedom nationwide. I was lucky to be able to speak with Charlie Hughes, the intake director at Texas Equal Access Fund (TEA Fund), a nonprofit serving people seeking abortions in North, East, and West Texas, including the panhandle (full disclosure: I am a volunteer with the TEA Fund). Our conversation has been condensed and edited. It originally appeared in today’s email newsletter, to which you can subscribe here.

Arielle Swernoff: What does SB8 going into effect mean for people in Texas who are seeking abortions? Who’s going to be impacted the most?

Charlie Hughes: It’s taken me a little while to get my head around it, because it’s a different type of ban than we’ve ever seen before. SB8 encourages everyone from local abortion protesters to family members to report and sue anyone assisting a person getting an abortion after six weeks. That means abortion providers, clinic staff, funds that help patients pay for their health care, and even someone who drives a patient to a clinic can be sued. Family members, friends, rideshare drivers—it doesn’t really matter. SB8 paves the way for anti-abortion activists to bring endless frivolous lawsuits against abortion providers, with the goal of eating away our funding and our capacity to help people.

The impact is going to be huge. Lots of people in Texas think abortion is already illegal, and this just further stigmatizes it. Texans who are already marginalized—people of color, indigenous people, young people, people living in rural areas—are already facing so many barriers. This is going to further criminalize access to abortion for all of them, whereas people with more resources who don’t need any assistance will always have better access. According to our data, the vast majority of Texans who get abortions do so after six weeks, and they’re going to have to go out of state because of SB8.

AS: One particularly scary piece of this law is the so-called abortion bounty. Can you talk a little bit more about that, and what impact it might have on your work and the work of abortion funds?

CH: That particular part of the law is really horrible. It means that if anyone brings a case against us, we have to pay for their court costs, and will be fined a minimum of $10,000. That money is taken away directly from people trying to access abortion care. What’s especially frustrating is that it incentivizes people to make those claims, since they don’t have to pay for their own lawyer fees. If you want to sue anybody, you can just do it, without any kind of deterrent. It encourages people to turn on their loved ones, because everyone loves someone who has had an abortion.

We have to follow the law, so we’re going to be helping the minority of people seeking abortions in the first six weeks, and then we’re going to be there to support people who are further along to find places that are not in Texas where they can get the care they need. It’s a big pivot for us, to help people find those resources out of state.

AS: On Twitter, it feels like a lot of people are just tuning in to what’s happening in Texas. But this didn’t happen overnight. Texas and other states have been trying to claw back protections for abortion for a long time.

CH: Yeah, sadly, this is just the latest blow to abortion rights. It was already extremely difficult for people in Texas to get the care that they needed when they needed it. When someone finds out that they are pregnant and decides that they want an abortion, the first thing that happens is that they discover how much it’s going to cost [ed. note: In Texas, this can be anywhere from $300 to $1,500]. There’s a ban on both public and private coverage for insurance, so the abortion costs come straight out of the patient’s pocket. That’s already a big burden for a lot of people. There are also mandatory waiting periods: Texas’s waiting period is 24 hours, and there’s state-mandated counseling, which forces people to make two trips to the clinic. So that might mean they have to take more time off work, and since we don’t have paid sick leave, that ends up being a pay cut.

Beyond that, Texas is huge. All of our clinics are based in the cities, so we have a lot of rural communities where people have to travel a long way to get to a clinic that has abortion care. We already had a ban on abortions after 20 weeks, after which a patient would have to travel out of state, which brings lots of additional financial burdens. But now, most likely at least 75% of our callers will be going out of state.

We’ve always had misinformation and stigma around abortion. We ran a poll that showed that 42% of Texas voters don’t know that abortion is legal. This is part of why abortion funds have to be really scrappy, especially in Texas. We’ve been fighting for a long time, and we’ll just continue, because people need abortion care. Abortions are still going to happen no matter what.

AS: How are grassroots groups and abortion funds preparing to respond to this particular law?

CH: We already went through an abortion ban last year when Texas Gov. Greg Abbott used the Covid-19 pandemic as an excuse to ban all abortions in our state, and we had to help people navigate new barriers and go out of state. It’s sad to say, but we’ve had a helpful window into what’s going to happen now, which in a sense is a good thing because we’ve been able to identify more clinics beyond the closest ones we used to work with, which have been filling up. That’s what a lot of the funds are doing right now—just connecting with clinics that are willing to work with us. We can’t send everyone to the same out-of-state clinic because they’ll be overwhelmed, so we’re branching out.

Right now, we serve 110 out of 254 counties in Texas. We have a relationship with all the clinics in this area, so we’re familiar with the landscape and we’re able to tailor our support based on regional needs. But now we may need to start coordinating with other funds on where we send people.

AS: Yeah, I’ve been thinking about how people from Texas might have to travel to Louisiana, which right now is dealing with Hurricane Ida!

CH: I’m not sure there are any clinics open in Louisiana right now. People from Louisiana were coming to Texas! People usually prefer to drive to their appointments, but if you’re going to have to get on a plane anyway, you can go anywhere, not just to a neighboring state.

AS: Today, all eyes are on Texas, but obviously, this is going to have implications beyond Texas. Looking forward, what do you think SB8 might mean for the rest of the country?

CH: Right now there are about 15 states that have passed near-total abortion bans—most of which have been blocked by the courts and are not in effect. This Texas ban is unique because the responsibility of reporting falls on regular citizens. Now that it’s been upheld by the Supreme Court, I could see other states trying to put more onus on citizens rather than the state to enforce existing bans. They’ll see Texas as a guide. But the Supreme Court also has the upcoming Mississippi case, which could actually overturn Roe. [Ed. note: This fall, the court will hear Dobbs v. Jackson Women’s Health Organization, a challenge to a Mississippi law that bans abortion after 15 weeks of pregnancy, a case that is expected to decide the fate of Roe v. Wade.]  If that happens, clinics in regions like the Northeast will be extremely busy. But I intend to keep fighting regardless.

AS: What can someone reading this interview do to support continued abortion access and reproductive justice?

CH: First of all, people need to understand that funding abortion is a radical act of compassion. As I said, everybody loves someone who’s had an abortion. Abortion funds are a lifeline to people who need care, don’t know where to start, and don’t have anybody to talk to. So support your local abortion fund, wherever that may be, and support other funds, too. Right now, this law is trying to scare people away from us, so the best way to respond is to support us, both financially and by speaking out on social media or wherever else.

Conversation
The View from the Ground
What overturning Roe means for abortion funds.
Arielle Swernoff
How To
How to Give Yourself an Abortion
with pills
Arielle Swernoff
Sign up for our email newsletter, featuring exclusive original content
Want original reporting and analysis on Israel/Palestine?
Sign up for the Tuesday News Bulletin.