The Right to Boycott Is Under Attack

The director of the new documentary Boycott discusses the high stakes of the legal fight against anti-BDS legislation. 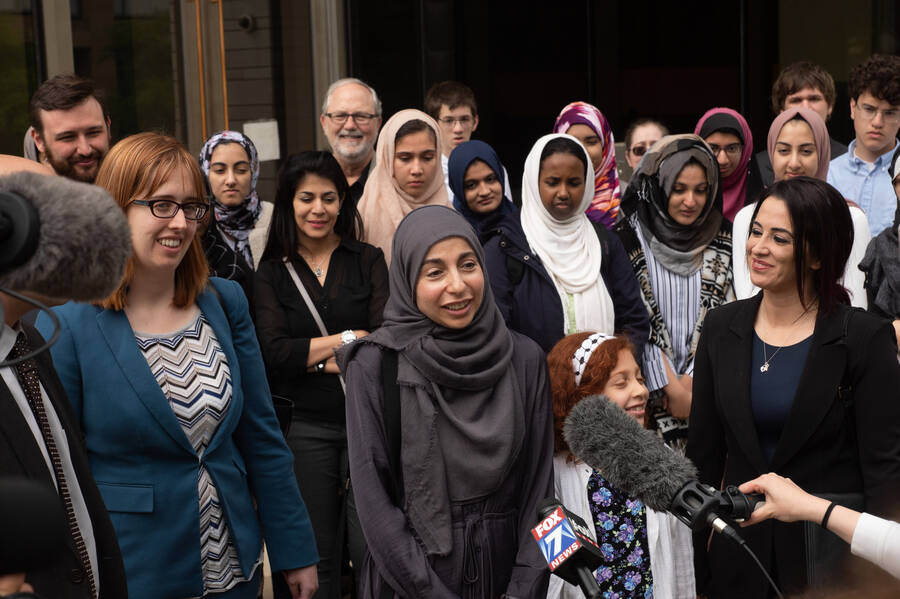 The documentary Boycott, which premiered on Sunday, foregrounds the stories of three Americans suing their state governments for terminating their business contracts when they wouldn’t pledge not to boycott Israel, as required by recent state legislation. One is Alan Leveritt, publisher of the liberal magazine Arkansas Times, who has little interest in the Boycott, Divestment, and Sanctions (BDS) movement against Israel per se, but refuses to pledge not to boycott on free speech grounds—thus forfeiting much-needed advertising money from a local state college. Another, Bahia Amawi—a Palestinian American speech pathologist in Texas—does her best to boycott Israel in solidarity with her family living under occupation. Her services as an Arabic-speaking child speech pathologist are much needed in her Austin-area school district, but she’s fired because she won’t pledge to abandon her political commitments. Finally, Arizona lawyer Mik Jordahl has pledged to boycott companies complicit in the occupation after an eye-opening trip to the West Bank with his Jewish son; he has to give up his contract providing legal services to incarcerated people, and takes a financial hit as he continues to provide the services without payment. Boycott, produced by the Israel/Palestine-focused media company Just Vision, shows us these characters in their workplaces, with their families, and in courthouses as they push to invalidate anti-boycott laws on First Amendment grounds. The film juxtaposes the triumphant narrative of the plaintiffs’ wins in court with the chilling story of how a vast lobbying effort successfully implemented anti-boycott legislation in 34 states, often with little fanfare and with bipartisan support.

For this week’s special Wednesday Culture Newsletter (subscribe here!), I interviewed Boycott director Julia Bacha about the film’s political message and the decision to highlight these three plaintiffs and the evangelical politicians pushing anti-boycott legislation. This interview has been edited for length and clarity.

Mari Cohen: Why a documentary about anti-boycott legislation?

Julia Bacha: I’ve been making documentaries for the past 17 years with Just Vision. Up until Boycott, all our projects were focused on Palestinians and Israelis working to create a future of justice and equality for both communities. Over the past few years, we’ve noticed a trend of increasing repression against activists on the ground in Israel and Palestine, and internationally. That has coincided with a conversation shift in America—there has been an increasing opening of spaces to criticize Israeli policy toward Palestinians that did not exist before. In response, we’ve witnessed attempts to legislate against advocacy for Palestinian human rights. When we realized that was happening, we felt it was critical to tell that story, particularly because of how invisible these laws have been in the US media. And when Americans from different political backgrounds started challenging these laws in courts, we knew we had the perfect narrative threads to tell the story.

MC: How did you choose the three protagonists to follow in the film?

JB: Over the course of production, as often happens, we were following many more stories than the three that ended up in the film. At first, we started following Esther Koontz, a math teacher in Kansas, who was actually the first person to challenge the anti-boycott law—and she won in the courts. Her story is brilliant—so it was heartbreaking when, over the course of 18 months editing the film, we had to make some difficult decisions, because documentaries are inherently reductive. We ended up with Bahia, Allen, and Mik because their stories were still in earlier stages, as opposed to Esther’s case, so we were able to follow the challenges they faced more closely. Also, we felt that they represented different motivations in coming to the decision of suing their employers, which is a pretty hard thing to do. We wanted to make sure that the film had enough time and space to explore their motivations. We felt that the three of them complemented each other nicely.

MC: The film opens with historical footage from other boycott and civil disobedience campaigns—including the National Farm Workers Association’s grape strike and boycott, the South African anti-apartheid campaign, and the US civil rights movement—which is then interspersed with footage of the Palestinian solidarity movement. What was the importance of including that footage?

JB: We want to communicate that withholding your money is a very important tool that activists, organizers, and ordinary people have long used around the world. When people think about the civil rights movement, or organizing for the rights of farmworkers in America, or the battle to end apartheid in South Africa, boycotts played a critical role. And when you see laws that give states the power to condition public money based on who people are boycotting, you are saying that boycotts are no longer protected by the First Amendment, and that the landmark 1982 Supreme Court decision in NAACP v. Claiborne Hardware—a case arising from the civil rights era—has to be overturned. If these laws, which are being challenged in court right now by the American Civil Liberties Union (ACLU) and the Council on American Islamic Relations (CAIR), pass legal muster in the lower courts and appellate courts, they will end up in the Supreme Court. At that point, we are looking at the possibility that boycotts are going to be taken away from social justice activists as a tool that we can use to combat things like climate change or the gun industry. You want to have the ability to boycott without fearing that you’re going to be fired from your job, or that your business is going to be put under significant threat. We hope that the film helps people understand the significant stakes of what people are fighting in courts right now.

MC: There are a couple of moments in which Arkansas state politicians admit to shocking things on camera. One is when Democratic State Sen. Greg Leding says that he didn’t really read the anti-boycott bill or pay attention to what was in it before he voted on it. What was it like to capture those things?

JB: It can be pretty shocking—sometimes you just need to ask the question, and people answer it. Those moments are reflective of how little we’ve talked about these laws. This was the first time that Democratic senator was being asked the question on camera. The way he talks about it, it’s like, “It was just presented to me, and I signed it, I didn’t really look at it very closely.” When we allow lobbyists to dominate the conversation with state legislators, there is a lack of accountability.

MC: The film heavily features Arkansas State Sen. Bart Hester, who introduced the state’s anti-boycott bill and is very proud of it—and is also very honest. At one point, he says didn’t consult with anybody from the local Jewish community on the bill, because he doesn’t agree with them and doesn’t get along with them. Was it challenging to get him to participate in the film?

JB: It did take some time. But once he accepted it, and once we started the interview, he was very comfortable. What you see reflected in the film is very much what I experienced interviewing him, which is that he is someone who feels comfortable with his decisions. He’s driven by his religious beliefs. He has a very particular understanding of the separation of church and state—in his view, the church is protected from the state, rather than the state being protected from the church. His belief informs every policy that he passes and everything that he does in the legislature. His understanding of the Bible is one that supersedes direct interactions with his constituents. He mentions that he did not feel like he needed to discuss the anti-boycott deal with the local Jewish leadership, despite the fact that, as he says in the film, the motivation to pass the bill was to protect the Jewish people.That’s because his understanding of what it means to protect the Jewish people comes from the Bible, not from the Jewish community.

JB: There are many American Jewish institutions that are very supportive of the anti-boycott laws and have been very active in lobbying for it. In the film, we don’t do as much of a deep dive on them. But we do talk about Israel Allies Foundation, whose national director at the time, Joe Sabag, was incredibly active in organizing for and lobbying in state legislatures. The lobbying groups also included AIPAC, so we have a nod to AIPAC very briefly in the film. But Hester figures so prominently because he’s not just an individual—he is representative of a larger trend across our country. Evangelicals are not a monolith, but there is this increasingly popular theology around the idea that the second coming of Christ is tied to the borders of Greater Israel and the return of Jews to the whole land. We wanted to highlight that because there was such a strong mobilization of that community around anti-boycott laws. But we did not mean to say that that there aren’t many other institutions in America that have also been very involved in lobbying for this.

MC: Since these court cases were won, some of these states have adjusted their laws to make such challenges moot—so for instance, now the laws in Texas and Arizona only apply to larger companies. How does that context change how we should understand the film?

JB: The reaction of the state legislatures to the judges saying that the bills are unconstitutional has been not to strike down the law, which was what the judges meant, but instead to rewrite the law, so that these plaintiffs are no longer able to challenge them. Right now, the law only applies to companies that have more than $100,000 in contracts and more than ten employees. What they’re trying to do is make it much harder to challenge this, because now you have to find someone willing to lose a much bigger contract, and put at risk many more people’s livelihoods. Just recently, CAIR found a plaintiff in Texas, and it’s the first company that will be challenging the new revised law—so it will be really interesting to see how that plays out. I think both the ACLU and CAIR would say that, obviously, they haven’t won the war. But they’ve won a really significant battle, because the revisions to the law—even though the law is still unconstitutional—now mean that it will affect a smaller number of people and that many more individuals across the country will not have this clause on their contract. The counterargument is that the chilling effect potentially remains the same, because you’d have to be pretty in the weeds to understand how these bills affect people differently, depending on the size of your contract. What they’re trying to do with this law is send a message.