The Origins of the Ukraine Crisis

A guide for the perplexed 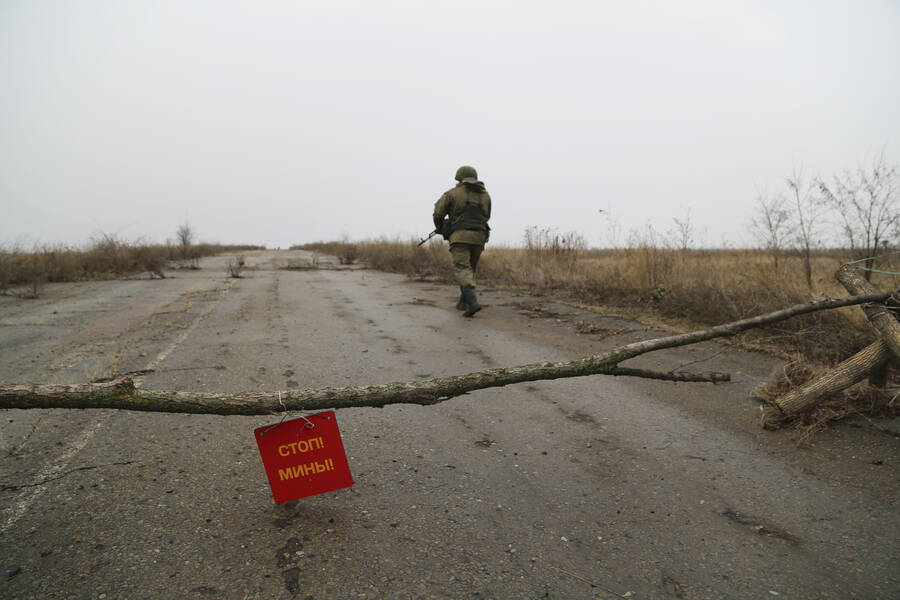 A serviceman walks on a road at the line of separation near Sentianivka in Ukraine’s Luhansk region, which is controlled by Russia-backed separatists, December 9th, 2021.
Alexei Alexandrov / AP
Tweet Copy Link Email Print

AS AN ESTIMATED 175,000 Russian troops mass on Ukraine’s northern and eastern borders, plenty of misleading information is circulating online both on behalf of hawkish interests in Western capitals and on behalf of Moscow. So what is actually going on, and how did things get to this point?

Let’s start with the standard Western narrative about Ukraine, which goes something like this: A proudly independent nation wants to join NATO and the European Union and embrace liberal democracy, but Vladimir Putin’s Russia, the revanchist, authoritarian heir to the Soviet Union, will stop at nothing to reconquer its empire and restore its glory. According to this account, which is still commonly (if decreasingly) voiced in Washington think tanks and op-ed pages, the only honorable course of action would be for the United States and other Western governments to stand with Ukraine militarily and defend its sovereignty against the Russian menace.

The opposite narrative, advanced by the Russian government and subscribed to by many Russians, is perhaps best summarized by an article bylined by Putin himself this past July, available in English on the Kremlin’s website. It holds that Russia and the neighboring Eastern Slavic states of Belarus and Ukraine all draw on a common historical lineage tracing back to medieval Kiev; that the outside forces that invaded and divided them were overcome by the tsars, who unified Russia; and that the national borders drawn within the Soviet Union and transformed into international borders following its collapse are fundamentally illegitimate. Ukraine’s government, in Putin’s account, is “indulging neo-Nazis” who are dividing what should be fraternal bonds among the Eastern Slavs, and siding with Western powers that have repeatedly invaded Russia over the past two centuries; as such, Russia is within its rights to do whatever it takes to defend itself from them. While this position predominates mainly within Russia, parts of it are echoed by American commentators ranging from right-wingers like Fox News’s Tucker Carlson to left-wing anti-imperialists like GrayZone.

Both of these narratives are steeped in the self-flattering myths of Great Power nationalism; if the Western version is almost willfully ignorant of history, the Russian version draws upon an ancient, quasi-historical legend. A more measured account of today’s conflict might begin with the circumstances of the Soviet dissolution in 1991, which was agreed to by the leaders of the Soviet republics of Russia, Ukraine, and Belarus in a hunting lodge near the Polish border exactly 30 years ago this week, and which took effect mere weeks later. A dozen new independent countries came into being, reifying nominal internal borders between constituent nationalities that had been established by the Soviets as fixed international ones. In part due to Soviet migration policies, ethnic Russians (and members of other ethnicities that had become substantially Russified) now found themselves cast as minorities in the various Soviet successor republics, many of which were beginning to assert their own national languages and cultural symbols. In Ukraine, these Russian-speaking minority populations were concentrated in the Crimean peninsula and in the eastern provinces of Donetsk and Luhansk along the Russian border.

Despite enduring dramatic geopolitical and economic setbacks during the 1990s, Russia remained the dominant power in the region. In the 2000s, as it recovered its international footing under Putin, it also periodically meddled in the affairs of its former Soviet neighbors, exploiting arbitrary borders and ethno-linguistic divisions to maintain its influence and deter Western incursions into the former Soviet space. In the year preceding the Soviet breakup, George H.W. Bush’s secretary of state, James Baker, had assured the Soviet leader Mikhail Gorbachev that NATO—the military alliance formed by the US in 1949 for the explicit purpose of containing the Soviet Union—would expand “not one inch eastward” as the Soviets abandoned their Eastern Bloc satellite states following the fall of the Berlin Wall. Nonetheless, under Bill Clinton and George W. Bush, NATO welcomed not only former Soviet allies like Poland and Hungary, but also the former Soviet Republics of Estonia, Latvia, and Lithuania, thus bringing the Western military alliance hundreds of miles closer to post-Soviet Russia’s borders. (All of these countries also joined the EU, further solidifying their ties to the West.)

To the Russians, NATO expansion represents a broken promise—part of a long list of US military adventures that Russia opposed, including the Kosovo War of 1999, the Iraq War of 2003, and the Libyan War of 2011. The countries into which NATO expanded all had democratically elected governments that sought that expansion, and under international law they had every right to do so; nonetheless, many Western policymakers understood that any expansion would be taken as a provocation by Moscow. Others, however, saw NATO expansion as an ongoing and unfinished project, regardless of what tensions it might exacerbate.

During George W. Bush’s presidency, popular uprisings in the former Soviet republics of Georgia and Ukraine brought US-friendly governments to power in both. Whether or not US intelligence agencies were primarily responsible for these uprisings, as Russia contends, what is certain is that Bush welcomed them as part of his expansive “Freedom Agenda.” Against the advice of many US intelligence officials and Western European governments, at a 2008 summit in Bucharest, he insisted on keeping open a path for NATO expansion for both countries. As The New York Times reported yesterday, leading Russia experts like Fiona Hill now maintain that Bush’s “Bucharest compromise” was the worst of both worlds, as it offered Ukraine and Georgia no actual protection from NATO while at the same time provoking an overreaction from Moscow. Sure enough, four months later, Georgian President Mikheil Saakashvili felt emboldened enough to assert control over the Russian-backed separatist regions of Abkhazia and South Ossetia, imagining that Bush would support his claim. Bush did not, and Russia easily defeated Georgia in a brief war; in the aftermath, Saakashvili fled Georgia, which has towed Russia’s line ever since.

The beginning of Ukraine’s current crisis wouldn’t come until the end of 2013, during Barack Obama’s second term. After Ukraine’s legitimately elected but deeply unpopular President Viktor Yanukovych decided to reject an association agreement with the EU in favor of closer ties with Russia, Ukrainians took to the streets of Kiev in a massive uprising that culminated in Yanukovych fleeing the country. In response, Russia seized and annexed Crimea from Ukraine in early 2014; though this was one of the more brazen violations of international law of the past decade, and was treated as such by Western governments that responded with sanctions, it faced minimal resistance on the ground since Crimea had so few ethnic Ukrainians. Russia also sent irregular forces into the eastern territories of Donetsk and Luhansk to join with the local ethnic Russian population that had supported Yanukovych, leading to a civil war in eastern Ukraine that has persisted to this day, claiming at least 14,000 lives over the past seven years.

Russia’s intervention has had the effect of stirring up anti-Russian nationalism throughout most of Ukraine, which is more determined than ever to break ties with Russia and integrate with the West. Contrary to Russian propaganda, the bulk of Ukrainians are not members of far-right, neo-Nazi, antisemitic parties, although such elements certainly exist in Ukraine, as they do in Russia. (Ukraine’s president, Volodymyr Zelensky, is Jewish, as was its prime minister from 2016–2019, Volodymyr Groysman; while this hardly disproves the existence of widespread antisemitism in Ukraine, it does suggest that the government is not in fact in thrall to neo-Nazis.)

Over the past seven years, Russia has periodically flirted with a major escalation in Ukraine, but has never really followed through; the conflict has been more or less frozen in eastern Ukraine, and at a relatively low cost, it has served Russia’s goal of keeping Ukraine from progressing toward EU or NATO membership. But many analysts fear that what’s happening now is different, that the scale of Russia’s buildup as well as Putin’s increasingly hyperbolic rhetoric (yesterday, for instance, the Russian president said that Ukraine’s policies in the war-torn eastern regions “resemble genocide”) suggest that a major invasion is coming.

It would be irresponsible to speculate here on whether that’s actually true, or whether this is simply a bluff, a test of Joe Biden’s new administration. Biden’s predecessor, Donald Trump, was infamously sympathetic to Putin’s point of view on Ukraine; it was only because he was overruled by both parties in Congress and his own cabinet that US military support to Ukraine increased on Trump’s watch, though he slow-walked its deployment and held it hostage to his domestic political concerns, resulting in his first impeachment. Biden, on the other hand, is unequivocally committed to the sanction policies that Obama imposed on Russia after the annexation of Crimea. So far, Biden has threatened unprecedented economic retaliation should Putin go through with an invasion, but has also made clear that the US will not be deploying troops to Ukraine beyond the small number of military advisers it quietly maintains there. Ukraine’s military, for its part, believes that the country won’t last long against a full-scale Russian invasion without direct Western support. Given that, Ukraine is planning for a potential guerrilla war should it fall under Russian occupation, which could potentially produce casualties on a scale Europe hasn’t seen since World War II. The plausible threat of such a quagmire might be the main check on Russia’s actions right now.

So where does that leave us? In the very uncomfortable place where we’ve been for the past seven years, watching a country battle for its sovereignty against a much more powerful neighbor, cognizant that every step we’ve taken to support that country’s sovereignty over the past three decades has only encouraged its neighbor to escalate. The ugly geopolitical reality is that regardless of which side has a stronger moral claim, Ukraine simply matters more to Russia than it does to the US or any of its Western European allies. Russia may or may not invade Ukraine, but either way it is demonstrating right now that it has tens of thousands of troops ready and willing to do so—a demonstration the US isn’t remotely inclined to match. If war is avoided, it will be because Russia already has what it wants: a pliant neighbor that the West doesn’t consider worth the cost of welcoming.