The Lethal Antisemitism of “Cultural Marxism”

A right-wing conspiracy theory has once again proved deadly. 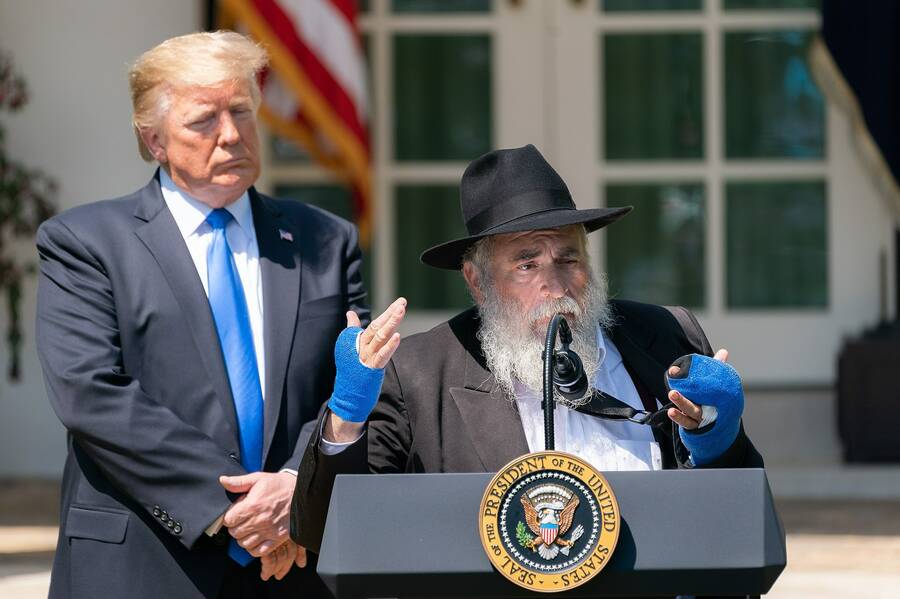 THIS PAST WEEKEND, a man opened fire in the Chabad of Poway synagogue outside San Diego, killing one woman and injuring three other people. The shooter's online manifesto includes a range of antisemitic conspiracy theories. He wrote that Jews control the media and the banks, and that he hated Jews for their "role in cultural Marxism."

"Cultural Marxism" is a trope that is rapidly spreading from the far right to the conservative mainstream. The term first gained notoriety when white nationalist Anders Breivik cited it as a reason for killing 77 people in two lone wolf terror attacks in Norway in 2011. Poway shows once again how dangerous the idea is. It creates a rationale for violence against leftists, against Jewish people, and against anyone associated with either.

"Cultural Marxism" has been floating around as a term for some time, and hasn’t always carried its current connotations. For example, it's been used to describe left cultural analysis by figures like Marxist British historian E.P. Thompson. According to the Southern Poverty Law Center, the term first began to gain traction in right-wing venues when paleoconservative writer William Lind used it during a 2002 speech at a Holocaust denial conference.

Lind used "cultural Marxism" to characterize the ideology of the Frankfurt School—a group of predominantly Jewish intellectuals who fled Nazi Germany in the 1930s. Lind argued that the Frankfurt School had developed anti-racism, feminism, and sexual liberation in order to undermine traditional American values. "Cultural Marxism," for Lind, was a foreign Jewish plot meant to weaken the white Christian patriarchy that had made America strong.

This is a conspiracy theory, which is to say, a complete lie. The Frankfurt School was not single-handedly responsible for developing anti-racist and feminist theories and politics. Anti-racist and feminist activists like Frederick Douglass, Ida B. Wells, Sojourner Truth, Jane Addams, W.E.B. Dubois, and many others preceded the Frankfurt School by decades; they didn't need predominantly white men to invent their resistance movements. Those resistance movements are not, in any case, subversive attacks on true Americanism (as if such a thing even exists), much less a secret Jewish conspiracy.

But what “cultural Marxism” lacks in accuracy, it makes up for in poisonous efficacy. The theory, in one stroke, paints all left opposition to conservatism as an evil plot formulated by Jewish people. It's an easy bridge between typical anti-political correctness rhetoric and outright white nationalism.

In other words, “cultural Marxism” is a very effective dog-whistle. The term's deniability makes it convenient for bad faith laundering of antisemitism into mainstream discourse. Recently, the Jewish outlet Tablet published a piece by Alexander Zubatov that attempted to salvage the term, arguing that it is a useful way to describe left-wing cultural critique, despite its corruption by conspiracy theorists. But if it's been so corrupted, why keep using it?

RIght-wing self-help guru Jordan Peterson, for example, has also used the term "cultural Marxism," blaming the Frankfurt School and postmodernists like Jacques Derrida and Michel Foucault for what he sees as North American cultural rot. Peterson doesn't mention Jewish people specifically, but he's still mainstreaming antisemitic talking points with no apparent concern for their impact. In doing so, he provides a vocabulary with which the alt-right can reach out to the disaffected young men who follow him.

Even more disturbing, the term "cultural Marxism" was used in an infamous 2017 memo to Donald Trump from a White House staffer. Rich Higgins, a member of the strategic planning office at the National Security Council, wrote, "While opposition to President Trump manifests itself through political warfare memes centered on cultural Marxist narratives, this hardly means that opposition is limited to Marxists as conventionally understood." Instead, Higgins argued, cultural Marxism has "become the dominant cultural meme," adding that "some benefit from it while others are captured by it; including ‘deep state’ actors, globalists, bankers, Islamists, and establishment Republicans.”

This language, which lumps together all critics of the president with the antisemitic dog-whistle of "globalists" (followed up by "bankers," no less) is a bridge between the mainstream right and the far right. "Cultural Marxism" recognizes that the right’s culture wars are built almost entirely on antisemitic tropes. White supremacy connects anti-black racists and antisemites. Misogyny and homophobia map onto stereotypes of Jewish men as unmanly and sexually depraved. Jews as outside infiltrators ties into anti-immgrant sentiment.

In fact, one of the most insidious conspiracy theories of the moment holds that Jews are actively engineering the refugee “crisis.” The Tree of Life synagogue shooter targeted the Jews of Pittsburgh last fall because he believed that billionaire Jewish financier George Soros, and Jewish people in general, were working to bring immigrants into the United States to destroy the white American way of life. This directly echoes Adolf Hitler, who in Mein Kampf presented Jewish people as a rat-like alien infestation, eating away at the German volk. Linking Jewish people to a leftist program of calculated, corrupting immigration is simply an extension of Nazi propaganda. “Cultural Marxism” echoes and amplifies these strains of antisemitism, which collectively present Jewish people as conniving to destroy white culture, heritage, and purity.

Support for the right-wing government in Israel has led some American Jews to gloss over the rabid anti-leftism of the Nazis. The National Review’s Jonah Goldberg, for example, wrote an entire book claiming that Hitler was really a leftist. The truth is that Hitler was as determined to exterminate the left as he was to exterminate Jewish people, in part because he did not distinguish between leftists and Jewish people (the rarely fully quoted first line of Martin Niemöller's poem reads, "First they came for the socialists . . ."). Hitler saw himself as waging a heroic battle against what he called "the Jewish doctrine of Marxism"—an alien leftist creed designed to destroy Aryan German integrity and destiny. "Cultural Marxism," in extending Hitler's logic, is a reminder that Jewish people are attacked in part because they are seen as leftists, and that leftists are attacked in part because they are seen as Jews.

There is antisemitism in left communities, too, and it's important to work against it. But right now it’s far more urgent to recognize that the right's reactionary, conspiracy-theory fueled vision is structured around antisemitism. The invocation of "cultural Marxism" is a warning: the more power the far right gains, the less safe Jews will be.

Noah Berlatsky is the author of Nazi Dreams: Films About Fascism.

Review
The Rise and Fall of the Fourth Reich
A new book by historian Gavriel D. Rosenfeld traces the persistent idea of a resurgent Nazi regime.
Noah Berlatsky
Report
How Left-Wing Jews Organized for the Midterms
The 2018 election results in New York spotlight the work of Jewish activists.
Noah Berlatsky
Sign up for our email newsletter, featuring exclusive original content