The Knesset Pulls Back the Curtain on the Occupation

Thanks to political infighting, regulations allowing West Bank settlers to enjoy the rights of Israeli citizenship are on the verge of expiring. 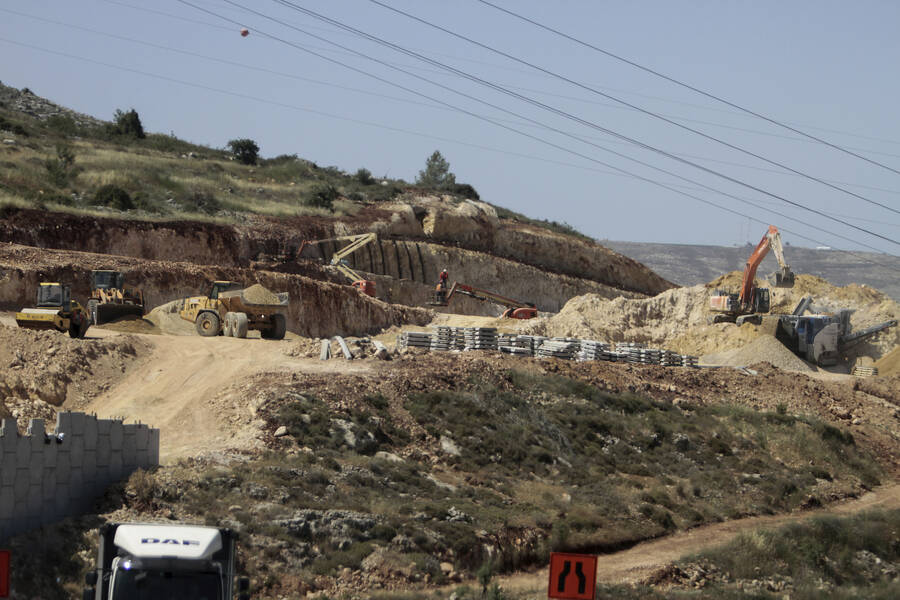 Bulldozers are working to build a new settlement in the West Bank after Israeli Defense Minister Benny Gantz approved the unification of the council of two Jewish settlements for the first time in 24 years, Nablus, May 10th, 2022.

SINCE 1967, successive Israeli governments—both right and left—have routinely passed a set of emergency regulations that enables the State of Israel to maintain a dual legal system in the West Bank. Under this system, Palestinians are subject to military law while Jews are subject to Israeli civil law, an arrangement that human rights organizations have consistently labelled “apartheid.” But on June 5th, the once-unthinkable happened: For the first time, the Knesset failed to renew the regulations.

Should these regulations expire, Israeli settlers would no longer enjoy the privileges of Israeli citizenship. Residents of Israeli settlements would immediately become subject to the same martial law as millions of West Bank Palestinians. They would lose access to public services like national insurance and education. Law enforcement would have to hand Israeli criminals over to military courts for trial. And Knesset members living beyond the Green Line would presumably be required to forfeit their offices: All MKs must also be residents of Israel. Settler leaders condemned the vote. “Without this law, it would be a disaster,” the governor of the Binyamin Regional Council, a grouping of settlements north of Jerusalem, told The Associated Press. “The Israeli government would lose any control here. No police, no taxes.”

The failed vote exacerbated an already roiling crisis in Israel’s coalition government, which contains a broad spectrum of ideologies—from nationalists to Islamists. The West Bank regulations have always had significant majority support in the Knesset, and this year is no exception. What is different now is that the staunchest pro-settler, expansionist parties—the Likud Party, the National Religious Party, the Kahanist Jewish Power Party—sit in the opposition, where they are laser-focused on bringing down the government. Led by former Prime Minister Benjamin Netanyahu, they voted against the regulations. So did some left-wing Arab coalition members, who defied the demands of coalition politics, voting against renewing the regulations or abstaining, often for personal political reasons. The right-wing elements of the coalition—specifically Justice Minister Gideon Sa’ar, who brought the regulations up for a vote—were thus left holding the bag.

On the other hand, many left-wing lawmakers—including those from the Labor and Meretz Parties—were willing to vote for the regulations in an attempt to keep the current broad-based, if flimsy, coalition afloat and to keep Netanyahu out of power for a bit longer. “What does it do for me to vote down these regulations?” Mossi Raz of the progressive Meretz Party asked. “Will it end the occupation? No. Will it end Apartheid? No. Will it help a single Palestinian? No.”

The current government will attempt to pass these regulations again before they expire at the end of the month. But their initial failure has, Wizard of Oz-style, pulled back the curtain on some of the inner workings of Israel’s 55-year-old military occupation. Raz sees a net positive in the fact that the continuation of the occupation is under discussion and scrutiny. “Finally,” he said, “Israelis know that settlers live outside the borders of Israel, that they live in occupied territory, that they live with two systems of law.”

Since last Monday, settlers in the West Bank have had to grapple with what it would be like to live under Israeli military rule. One settler campaign poster read: “[Prime Minister] Bennett, [Justice Minister] Sa’ar—resign! On your watch, residents of the West Bank will become second class citizens, and Israel will become an apartheid state!” Palestinians already live in such a state, but it is also true that many of the residents of the West Bank have lived in a kind of legal limbo for the last 55 years. Successive Israeli governments have lured hundreds of thousands of Israeli citizens to the territory, dangling economic incentives and promising them more space, an easy commute, and, critically, access to the benefits of their country of origin. While numerous legislative acts as well as decisions handed down by the High Court of Justice have cemented those rights, settlers have remained in a dubious legal position where, should Israel fail to pass certain regulations like the ones currently hanging in the balance, their lives could be profoundly upended.

For the right-wing opposition parties that helped vote down the regulations, injecting uncertainty into the lives of their constituents is a means to the end of bringing down the government. “They wanted to show that this government is unable to execute its basic functions with Arabs present—that it’s illegitimate,” said Assaf Goldfarb, the Director of the New Israel Fund’s Shatil Center for Policy Change. (Note: Goldfarb is my colleague at NIF, where I’m the director of media and policy.) Their hope is that failure to pass what is perceived as a “basic” security measure may prove fatal to a government that hangs by a thread.

Their bet may yet pay off. Nir Orbach of the Yamina Party, a right-wing coalition member, nearly came to blows with Arab coalition member Mazen Ghanayim of the United Arab List when Ghanayim voted “no.” He has begun talks with Netanyahu and the Likud about how he might join them in creating a new coalition of 61 Knesset members, even without fresh elections. Such a right-wing coalition would certainly pass these regulations, as would most any other political configuration in the Knesset. This leaves many of the left-wing coalition members scrambling to pass these regulations before June 30th. If they don’t, the right will get these regulations passed and then some: If another member of the coalition defects—as Yamina’s Idit Silman did in April—and votes with the opposition to dissolve the Knesset, it will usher in the fifth round of elections for Israelis in three years. Recent polling indicates that elections would yield a far-right coalition headed by Netanyahu, or, as Raz put it, “a Likud turned fully Kahane.” And even bringing down the coalition over the West Bank regulations wouldn’t prevent the dual legal system from continuing: Once new elections were called, the regulations would be automatically reinstated until six months after the establishment of a new government.

From the perspective of anti-occupation organizers, this moment is important, but it is not the one they are looking for. Eran Nissan, the Chief Operations Officer of Mehazkim, a progressive digital movement, believes that ending the occupation will require “coresistence by a political movement that is not only about ending the West Bank regulations, but about security and prosperity and justice for every inhabitant of this land.” The strategy to end it, he said, should not rest on “some expired regulation or some internal right-wing pissing match.”