Seeking Justice in an Unjust System 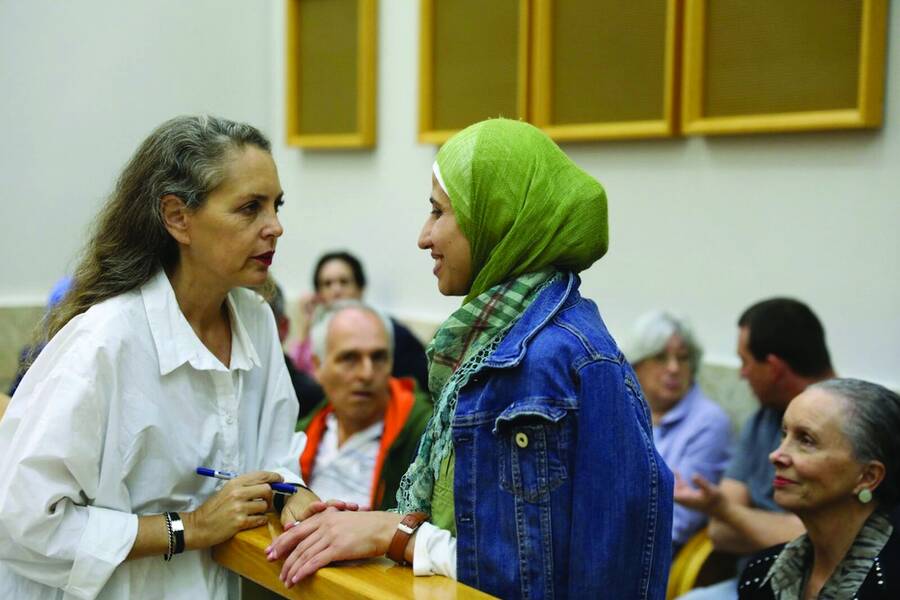 HUMAN RIGHTS ATTORNEY Gaby Lasky is perhaps one of the busiest people in Israel. On any given day, she ping-pongs between the Ofer Military Court in the West Bank, district courts throughout Israel, her law firm in Tel Aviv and her office in the Tel Aviv Municipality, where she is a member of the City Council representing the Zionist left Meretz Party.

Lasky—who was born in Mexico City in 1967, the year the occupation began—has long, dirty-blonde hair that contrasts sharply with the black attorney gown she wears in court. Drinking black coffee in her modest Tel Aviv law office, where we met, she has a positive but nervous energy about her, as if anticipating another court ruling at any moment. Yet she spoke with me for almost two hours without looking at her phone once. Above her desk is a print of street artist Banksy’s piece on the West Bank separation wall—a girl being lifted by balloons—and a framed section of the fence in Budrus, where in 2003, Palestinian residents along with Israeli and international activists were detained for protesting the barrier Israel built on village lands. Lasky represented the activists, arguing over and over again in court for their right to protest military occupation. “My goal is to make peace, but all I do is make war. When I go to court, it’s a war zone,” she said. The protestors ultimately forced Israel to change the route of the barrier.

Lasky specializes in cases involving free speech and the right to protest. About half her clients are Palestinians, mostly residents of the West Bank active in the popular struggle against Israeli occupation. The other half are Jewish citizens of Israel—among them anti-occupation activists, Ethiopian Israelis protesting police brutality, demonstrators against government corruption, and Israeli human rights organizations like Machsom Watch, B’Tselem, and Breaking the Silence.

When people are arrested, she responds immediately. Since many of her clients are Palestinians or Israeli activists with little money, Lasky doesn’t charge much. To keep her practice afloat, she works on dozens of cases at once. She says she only remembers to charge later, if at all.

In recent years, Lasky has argued a number of high-profile cases. In 2011, she represented Daphni Leef, the activist who sparked the social justice tent protests on Tel Aviv’s posh Rothschild Boulevard in 2011. Leef was indicted on charges of assaulting a police officer, disrupting the peace and resisting arrest—all of which were eventually dropped. This past year, Lasky represented Dareen Tatour, a Palestinian citizen of Israel who was convicted by a Nazareth court in May of incitement to violence and supporting a terror organization on account of a poem she wrote and posted on Facebook calling on Palestinians to resist. Tatour, who already served three months in prison and has been under house arrest for nearly three years since her trial began, was sentenced to an additional five months in prison on July 31st.

Lasky says that at the time of Leef’s case, she wouldn’t have believed the indictment against Tatour could ever take place. “I lose sleep over this case,” she says. She points to “the shrinking of democratic spaces” both in Israel and the West Bank: anti-democratic legislation, the appointment of far-right judges, and an increasingly polarized discourse where incitement and threats have become the norm. “Fanaticism, racism, and hatred are guiding the public discourse, and instead of setting boundaries, the politicians ride on this.”

Lasky cut her teeth as an aide to Knesset Member David “Dedi” Zucker, one of the founders of the seminal anti-occupation group Peace Now and a member of the Ratz Party (Ratz later merged with other parties to become Meretz). Her introduction to human rights law came when Zucker became chairman of the Knesset’s Constitution, Law, and Justice Committee under Prime Minister Yitzhak Rabin, putting Lasky in a position to work with party members across the political spectrum on a variety of new laws. These included annulling the prohibition on meetings with the PLO, providing parking for the disabled nationwide, easing of press censorship, and other significant legislative initiatives that she says positively impacted Israeli society in all areas of life. But times have changed since the hopeful 1990s.

“Once, when I told people I’m a human rights lawyer, they would disagree with my views but show me basic respect. Today, I am simply a traitor . . . That is what hurts me the most,” she says, stopping herself from tearing up. “I think of myself as the most patriotic.”

At the moment, Lasky is probably best known in Israel and internationally for representing Ahed Tamimi, the now world-famous Palestinian teenage girl from the West Bank village of Nabi Saleh, recently released after serving an eight-month sentence for slapping an IDF soldier while he stood on her family’s property last year. The case afforded global media attention to an issue that Lasky has been dealing with for years: Israel’s detention and trial of Palestinian minors, a direct violation of the United Nations Convention of the Rights of the Child, to which Israel, a signatory, is ostensibly bound. Asked if anything still surprises her after so many years in this field, Lasky says, “I’m surprised that people cannot see a child as a child, even if they throw stones. It surprises me every single time.”

According to Lasky, Tamimi’s case demonstrates beyond a shadow of a doubt that Israelis live in an apartheid state. The soldiers involved in the incident didn’t even report it at the time, she tells me. It wasn’t until five days later, and under pressure from politicians provoked by the viral video of Tamimi’s slap, that authorities acted. “I brought examples in court of settlers assaulting police—and not only were there no indictments, they weren’t even taken in for questioning,” Lasky says. “The moment you apply the law differently to two groups based on their ethnicity, this is an apartheid regime.”

Lasky says she knows that the system in which she operates is not a justice system—particularly the military court, where Palestinians in the West Bank are tried, and convicted at a rate of 99%: “The military court is an organ of the occupation, and its main task is not to distribute justice but rather to perpetuate occupation.” But she says she feels a responsibility first and foremost to her clients, who she helps as best she can on a case-by-case basis. The larger motivation of her work, she says, is to inject human rights discourse into the court system. “In an Israeli court, still, I can talk about freedom of speech, and the judge is able to put himself in the defendant’s shoes—because he is a Jew. In the West Bank, everyone is a potential terrorist.” Her job, as she sees it, is to disturb this equation, “to not let the judges sleep well at night.”

The irony is that while Lasky takes on what Israelis consider to be the most radical legal cases defending Palestinians, she herself still identifies with old-school liberal Zionism. She supports a two-state solution and retains an uncynical belief in Israel’s Declaration of Independence and the necessity of holding the country accountable to it. She believes Israel can be a national home for the Jewish people, while providing equal rights to all citizens already within its borders.

When pushed on how exactly that would work, given the country’s current trajectory, she avoided getting into the details. The way she sees it, the path Israel is on is a disastrous one for the Jewish state. “If we don’t leave the occupied territories there are only two options: Israel becomes a binational state and gives citizenship to all residents, and then Israel ceases to be a national home for Jewish people. Or, it is an apartheid state. In both scenarios, it is the end of the Zionist idea.”

And yet, Lasky still cautiously believes that the legal path can bring about change in Israel from within the system. “I couldn’t do this if I wasn’t an optimist, but it is getting harder,” she says. “Every day a new red line is crossed.” She says in no uncertain terms that her goal is to become the Minister of Justice, a post currently held by the hyper-nationalist Ayelet Shaked, who recently said, “There is place to maintain a Jewish majority even at the price of violation of rights.” Looking to the future, Lasky says, “The anti-democratic legislation has been gradual, but the change back has to happen all at once. There has to be the realization that this is not a democracy.”

Profile
Fear Is Not a Good Principle
A Minnesota school desegregation advocate reflects on a life spent fighting.
Rachel Cohen